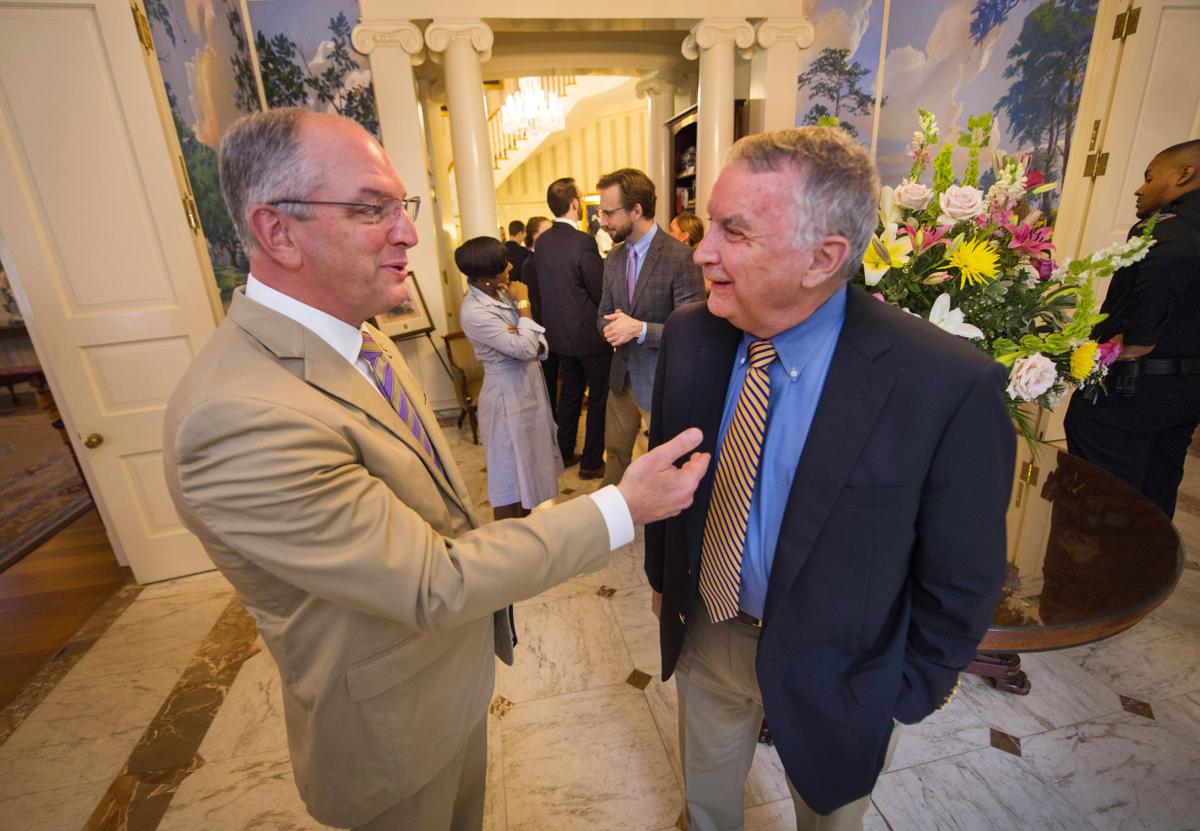 LSU economics professor Jim Richardson, right, visits with Gov. John Bel Edwards, left, Friday, April 26, 2019 at a luncheon at the Governor's Mansion, at which Edwards addressed graduating masters degree candidates from Richardson's capstone class at LSU's Public Administration Institute. Richardson, who has worked with six different Governors in his role with the Revenue Estimating Conference since its inception in 1987, is retiring soon. 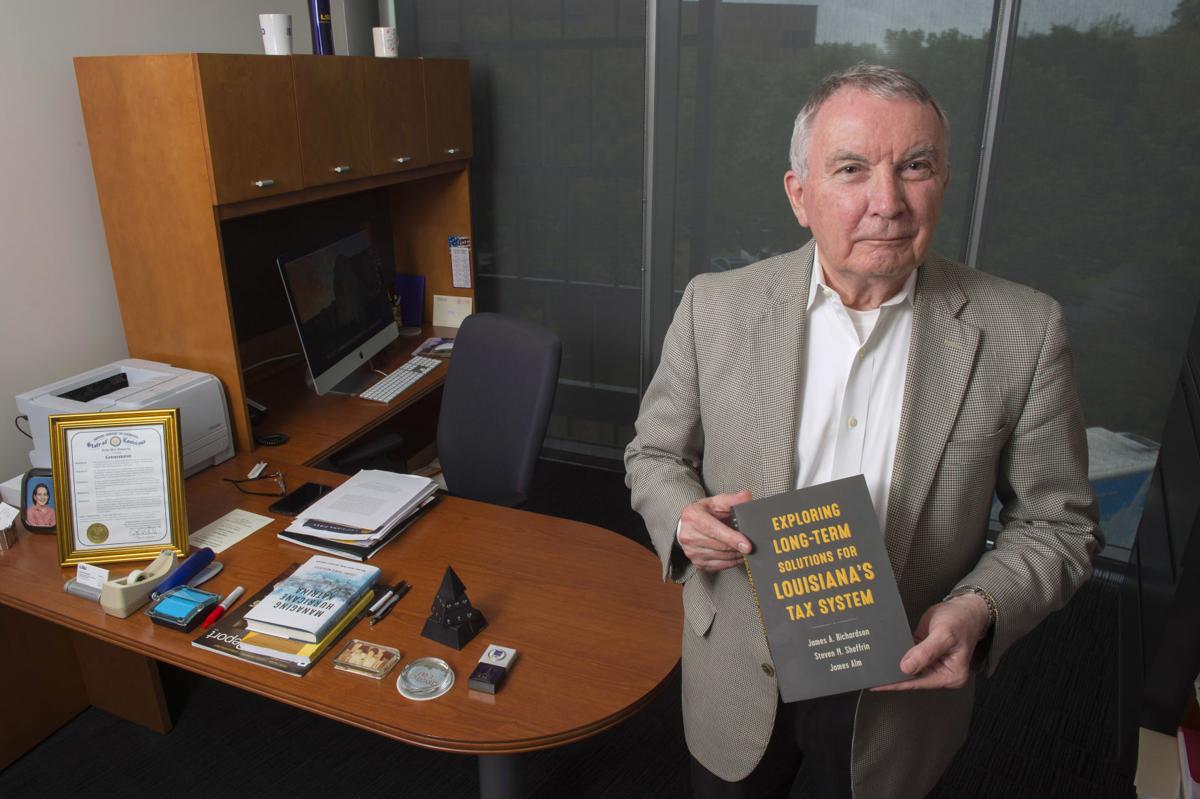 LSU economics professor Jim Richardson, in his office in the Business Education Complex at the school, Thursday, April 25, 2019. Richardson, a longtime independent, morally and ethically unimpeachable authority on state budget and tax issues, will be stepping down soon from the Revenue Estimating Conference, serving on the board that determines how much money is available for state lawmakers to spend since its inception in 1987. 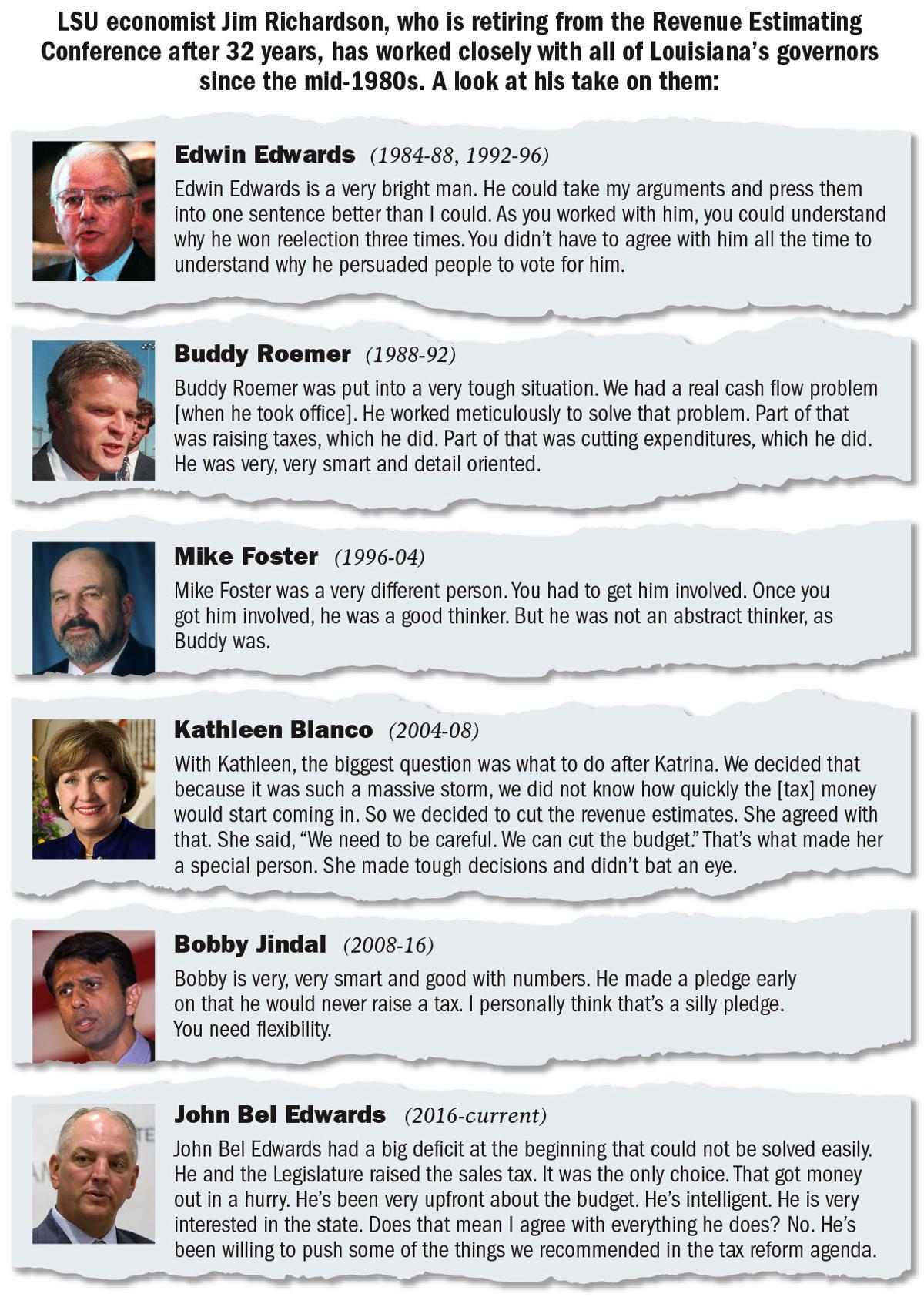 LSU economics professor Jim Richardson, right, visits with Gov. John Bel Edwards, left, Friday, April 26, 2019 at a luncheon at the Governor's Mansion, at which Edwards addressed graduating masters degree candidates from Richardson's capstone class at LSU's Public Administration Institute. Richardson, who has worked with six different Governors in his role with the Revenue Estimating Conference since its inception in 1987, is retiring soon.

LSU economics professor Jim Richardson, in his office in the Business Education Complex at the school, Thursday, April 25, 2019. Richardson, a longtime independent, morally and ethically unimpeachable authority on state budget and tax issues, will be stepping down soon from the Revenue Estimating Conference, serving on the board that determines how much money is available for state lawmakers to spend since its inception in 1987.

But in the Louisiana State Capitol, economist Jim Richardson has been the one constant on state budget and tax issues. Over the past 32 years, the LSU economics professor has served as an independent, professionally unimpeachable authority on one of the most powerful government panels in the state.

But the self-effacing Richardson, not one to draw attention to himself, will step down during the next two months from his appointed position on the Revenue Estimating Conference, a four-member government panel that determines how much money is available for lawmakers to spend each year.

The panel was created to prevent elected leaders from inflating revenue estimates out of thin air to, voila!, have more money to spend.

And since the decisions of the panel must be unanimous, Richardson, an unelected professor, has had an implicit veto on the political whims of governors and legislative leaders since he was appointed as a founding member of the REC in 1987.

David Sjoquist, an economics professor at Georgia State University, said he knows of no other state where a single economist wields as much influence in setting the revenue estimate as in Louisiana.

Richardson is revered inside the State Capitol. He has had a Cal Ripken-like record of not missing any of the 160 REC meetings since 1987, although he did have to attend one in 2012, at the request of then-Gov. Bobby Jindal, while convalescing at home only a month after heart bypass surgery. Over those 32 years, he has served with six governors, seven Senate presidents, eight speakers of the House and 10 commissioners of administration.

“He’s always been a solid rock,” said Senate President John Alario, R-Westwego, who has served with Richardson on the REC for 16 of the past 32 years. “We’ve always relied on Jim. He has been the non-political guy on the REC. I hate to see him leave.”

Richardson, 75, said it was a practical decision.

“I thought it was time to make a move given my age,” he said while eating his usual weekday breakfast at Christina’s in downtown Baton Rouge: a poached egg, a pancake doused in syrup and a cup of coffee.

In addition to Richardson, the other members are the speaker of the House, the Senate president and the commissioner of administration, who represents the governor.

“He obviously has a heart for public service,” the governor said in an interview. “I don’t think I’ve ever heard anyone criticize him or his work.”

Since the mid-1980s, Richardson also has repeatedly played a leading role in offering fixes for budget problems and chairing blue-ribbon commissions that recommend changes to the state’s tax system that would eliminate tax breaks to allow for lower tax rates — changes that state lawmakers say they favor but typically can’t bring themselves to support.

“I try to tell all my (academic) colleagues that we can make recommendations about tax policy without any penalty to us in terms of how other people react,” he said. “A legislator and governor have to be concerned about how their constituents will react. That’s why any tax change will be difficult. Some people will gain from it. Others will lose from it. Progress comes in small steps, not giant steps, usually. You have to keep working at it.”

Richardson, a San Antonio native who arrived at LSU in 1970, said he is not ready to retire from his university post.

As the lone economist on the REC, Richardson carries outsized weight with the other three, although House Speaker Taylor Barras, R-New Iberia, broke with tradition in recent months by refusing four times to agree to the revenue estimate accepted by the other three, in this case Richardson, Alario and Jay Dardenne, the governor’s commissioner of administration.

Despite Richardson’s important role, he has received little public attention — except for a single instance in 1995 when he made headlines statewide.

Harrah’s had made a single payment of $125 million that year to the state in return for being allowed to open the only land casino in New Orleans.

Then-Gov. Edwin Edwards said he wanted to use that money to raise salaries by 5 percent across the board for all state employees, university faculty (including Richardson), public school teachers and school support personnel. Alario, then the House speaker, and Sammy Nunez, then the Senate president, agreed with Edwards to count the money as a recurring source of revenue to make the pay raises possible.

Richardson balked, saying it was a one-time payment that had to go for retiring the state debt, as required under the state Constitution.

Edwards criticized him publicly; so did state legislators and the head of the teachers’ union. Teachers called him at home and called LSU’s chancellor to complain. Richardson wouldn’t budge.

Edwards, Alario and Nunez confected a plan to go around Richardson’s veto by having the Legislature vote to allow the REC to recognize the $125 million payment as recurring revenue in this one instance with only three votes. Their plan worked.

Loren Scott, then a colleague at LSU, said that while Richardson lost that fight, he laid down an important standard for him and the REC.

“Some people thought it would be costly to him when you go against the speaker of the House, the head of the Senate and the governor and the school teachers,” Scott said recently. “But it established his creds and brand as someone who would not bow to political pressure. He knew what was the right thing to do fiscally, and he stuck with it.”

Many people agreed with him. LSU’s university faculty gave Richardson a unanimous vote of confidence. Good government groups — such as the Council for a Better Louisiana and the Public Affairs Research Council of Louisiana — praised him, as did The Advocate’s editorial page.

“Richardson stood up for an important principle,” the newspaper wrote. “For doing so with courage and integrity, he deserves our admiration.”

Edwin Edwards, though, still believes he was right. “I had a higher responsibility,” he said recently. “We had to pay the teachers.”

The former governor had nothing bad to say about Richardson, though.

“He’s a very intelligent man, very trustworthy,” Edwards said. “I had a lot of respect for him.”

The REC was created in 1987 after the state ran budget deficits during five of the preceding six years, said Dennis Stine, then a state representative from Lake Charles who served on the panel for three years as commissioner of administration under Gov. Buddy Roemer.

The governor “would just move up the (anticipated) price of oil,” Stine recalled. “That was an easy denominator to move. Every dollar increase would create $21 million of revenue, so a $10 increase in the price per barrel of oil generated $200 million more in money to spend.”

“I thought it was important to have an economist on the board,” the former governor said. “At the same time, I wanted political figures on the board because we’re the ones responsible for government. It’s worked very well.”

Except for the disagreement in 1995, the four board members always agreed unanimously to either economist’s estimate until Barras refused to approve either one beginning in November.

After tense meeting over possible rosier Louisiana financials, no update to revenue forecast

Just when it seemed fights over Louisiana's state budget had become a thing of the past, tempers flared again at the State Capitol on Tuesday …

Because both the administration's and the Legislature's economists were forecasting that the state would collect more than $100 million more than previously projected, Barras’ move meant that the Legislature could not plan to spend the extra money and give teachers a pay raise in the upcoming year, as Gov. John Bel Edwards was proposing. Barras said it was too early to know for sure whether the money would actually appear as the economists were forecasting.

Richardson is a low-key man who has succeeded for so long in part by keeping his nose out of politics.

Asked about Barras’ move, he would not criticize the speaker but did say that the panel in March or April could have corrected any erroneous estimates from November and that the speaker’s failure to approve a revenue estimate then kept the governor from presenting his executive budget in February.

In Gov. John Bel Edwards’ view, the state will have enough money in the coming year to fully-fund the popular Taylor Opportunity Program for S…

“Obviously, there is politics involved,” Richardson said. “If you start using the REC to try to make government smaller, that is a bad precedent. That is truly a function of the Legislature. Hopefully, it’s a one-time event.”

In an interview, Barras said he was trying to guard against the REC overestimating revenue, as has happened in the past, thereby forcing the House, which writes the initial version of next year’s budget, to make cuts.

“I much would prefer making sure we have a real number,” Barras said.

Three economists are vying to replace Richardson on the REC, with the decision in the hands of the other three members. The three are Stephen Barnes, the director of the LSU Economics & Policy Research Group; Greg Upton, who analyzes economic policy issues in the energy industry at the LSU Center for Energy Studies; and Gary Wagner, who analyzes regional economies and state and local public finance issues at the University Louisiana-Lafayette.

“It will be hard to replace him, I suspect,” Gov. John Bel Edwards said. “People never questioned whether he had some partisan or philosophical motive. He always understood his job on REC was to estimate revenue, and that it was a political decision left largely to the Legislature about how that money would be ultimately spent or whether it would be spent.”