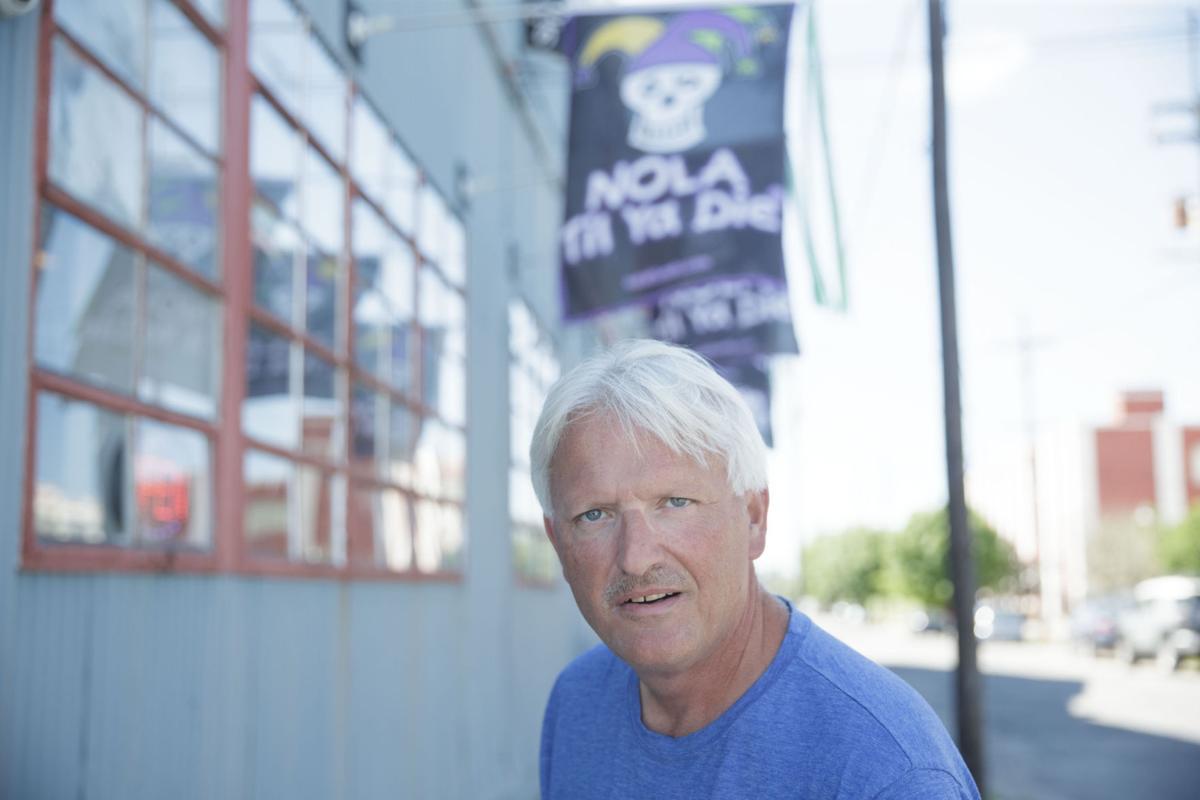 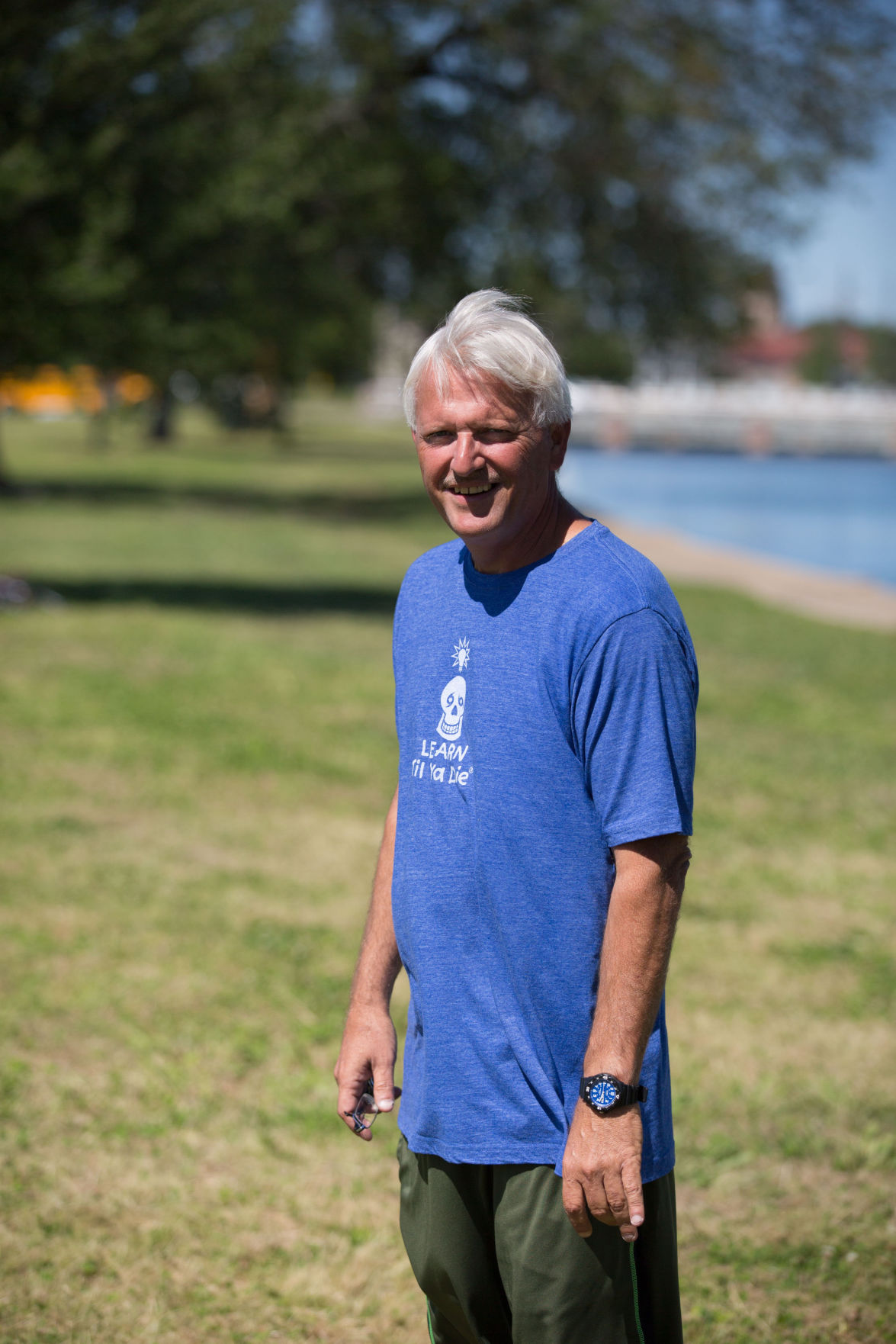 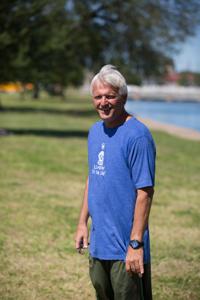 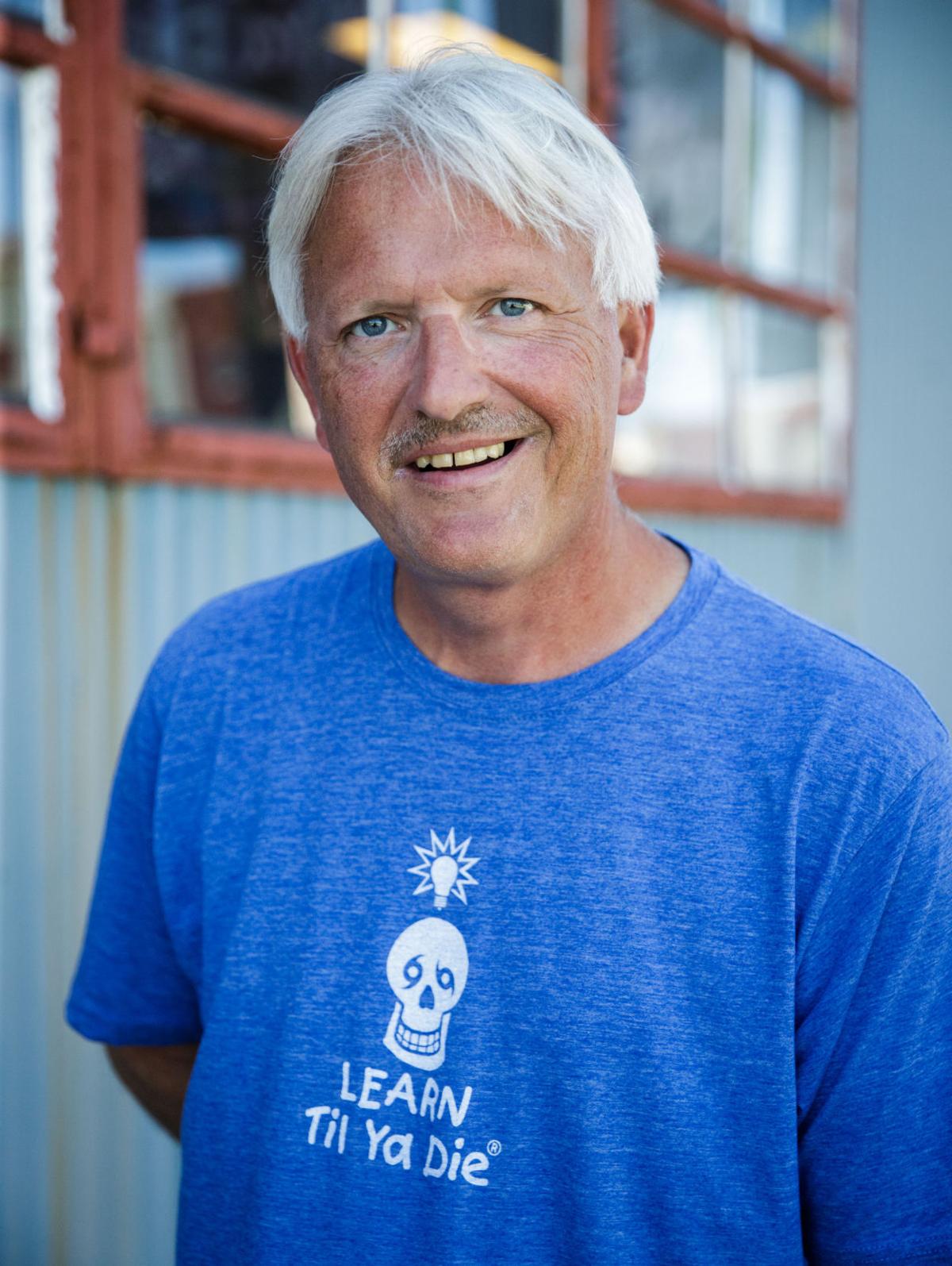 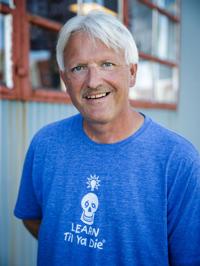 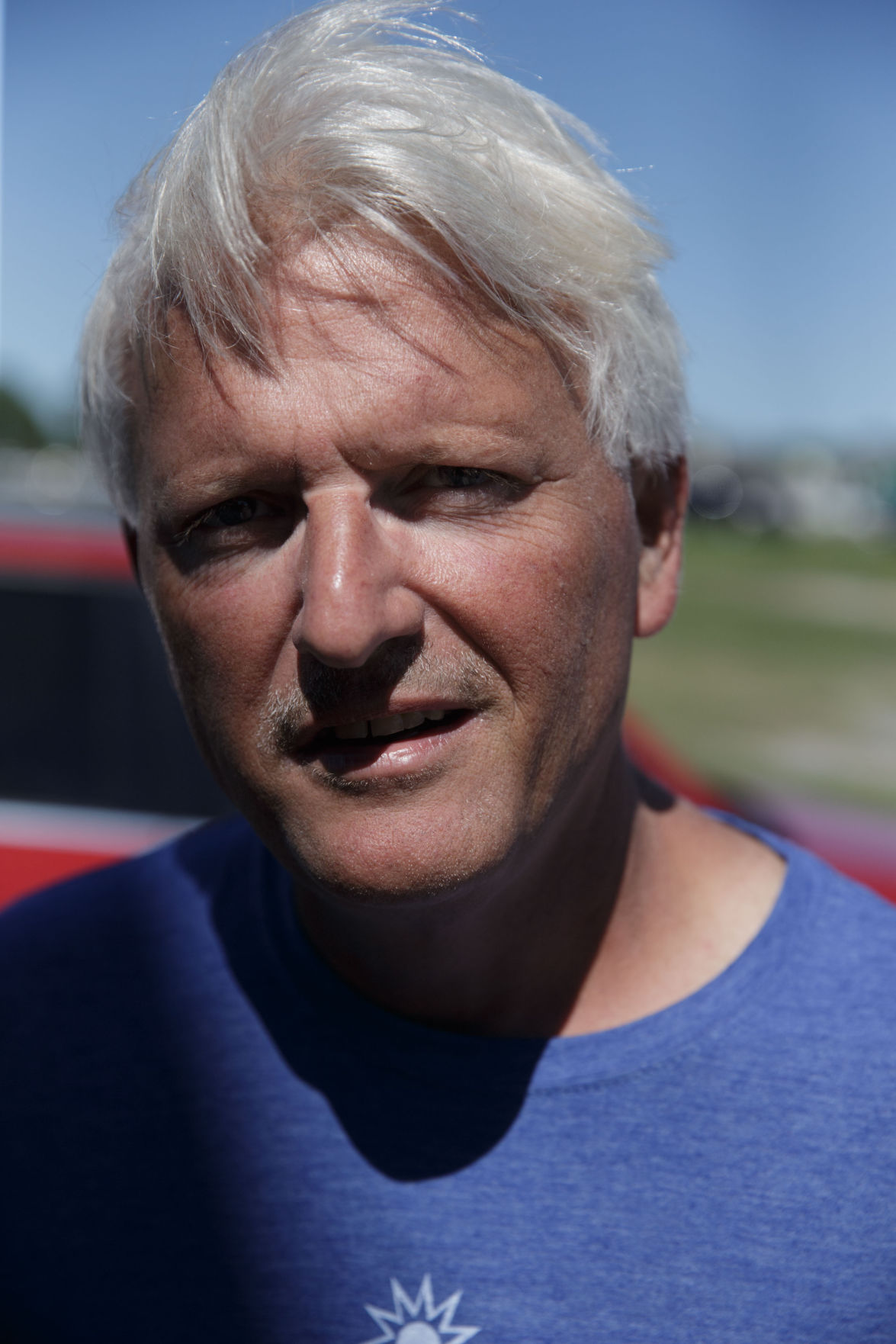 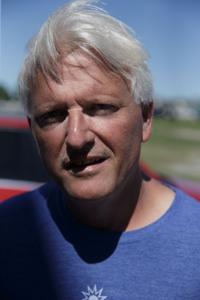 Jerry Kaczmarek still remembers the moment when his life began hurtling toward addiction. He was sitting in his police cruiser on Race Street writing out a report when the radio crackled with the signal for an armed robbery in progress.

He zipped around the corner onto Magazine Street, only to come car-to-car with the 16-year-old stick-up artist. “The next thing you know, instead of slowing to stop, he pushed on the gas pedal and just slammed right into me,” he said.

Kaczmarek’s injuries, from that run-in and others, forced the New Orleans police officer into early retirement in 2002, and soon he was hooked on the painkillers doctors had prescribed him.

He isn't taking pills any more, though. And he credits one thing with saving him from the same scourge that has ruined so many lives in the U.S. over the past decade: high-grade marijuana from Colorado, where the drug is legal for recreational use.

Taking pot to kick an opioid addiction — rather than using the drug in place of opioids in the first place — is a controversial approach, but one leading doctor in the field says there is growing evidence that marijuana can be used to treat chronic pain.

And the onetime law enforcer is now lobbying the Louisiana Legislature to add chronic pain to the list of conditions covered by the state’s medical marijuana law. His hope is that more patients can avoid falling into the same trap that he did by avoiding traditional painkillers altogether.

As a kid playing basketball on the streets of the 9th Ward, Kaczmarek always looked up to cops. He said he realized a lifelong dream when he was hired as a city police officer on June 5, 1994.

From the start, he was no drug warrior. He smoked marijuana before he joined the force. Once he was a cop, he decided that busting kids on petty drug raps was no way to win respect.

“I could actually see a little piece of me in all of those kids,” he said. “I used my own discretion on an individual basis. Why ruin a kid’s life? That could become your next two-star general.”

Kaczmarek’s assignments took him from the 9th Ward to Mid-City to Uptown, and over his years on the job, he accumulated a steady stream of injuries. They included the wreck with the armed robber as well as fights with mentally ill patients.

Study: Medical marijuana could be more than $300M industry in Louisiana

In October 2000 he went to see a doctor. “That’s when he told me, my shoulder, I just don’t have the strength in it,” Kaczmarek said. In another year and a half, he was out of the department.

Kaczmarek said he wasn’t fearful of the pain pills when he first took them. After all, they were prescribed by his doctor. But he quickly became hooked.

In 2007, he moved to Colorado with his family. He can rattle off the names and doses of the drugs that consumed his life for most of the next decade: Talacen, Oxycontin and Percocet.

It was around 2014 “when my wife confronted me and said, ‘You know what, you’re out of hand, you’re an addict. You need to do something about it.’ And I more or less just blew it off, and continued that destructive path.”

In June 2016 he got into a fight with his son that ended with the police being called, he said. Kaczmarek avoided arrest, but he and his wife permanently separated.

“The bottom line is, I could have easily ended up like a damn heroin addict in an alley,” he said.

Two months later, he walked into one of the marijuana shops that opened after Colorado voters legalized the drug in a 2012 referendum. Kaczmarek said he was an occasional user before, but the trip marked a turning point.

Kaczmarek said he got a special blend of marijuana that he used to treat both his pain and his withdrawal from opioids. He has been clean ever since, not counting the marijuana that he continues to use, he said.

He is now one of a growing number of former opioid addicts who credit their recovery to marijuana. Their claims are viewed with skepticism by many doctors. But researchers do say that marijuana can be useful in treating chronic pain.

The science on marijuana and chronic pain is promising, according to Kevin Hill, an assistant professor of psychiatry at Harvard Medical School who treats substance use disorder. He also has written a book called “Marijuana: The Unbiased Truth About the World’s Most Popular Weed.”

Hill concluded in a 2016 article in the Journal of the American Medical Association that there is convincing evidence that marijuana works as a treatment for chronic pain. He remains skeptical about using it to treat some other conditions like glaucoma, since effective medications for those problems already are on the market.

Researchers reported in a 2014 article in the same journal that state laws allowing medical marijuana use are associated with lower death rates from opioid overdoses, which suggests that weed could prevent patients from sliding into opioid abuse in the first place.

“It’s hard to ignore that there is some evidence for cannabis related to treating chronic pain,” Hill said.

However, Hill warns that people addicted to opioids should not try to wean themselves off them through the use of marijuana. Buprenorphine, suboxone and methadone are all available legally with a prescription and have been proven clinically effective in treating opioid addiction, he said.

A total of 29 states plus the District of Columbia have enacted medical marijuana laws, according to the National Conference on State Legislatures. Louisiana passed a law meant to establish a state program in 1978, but it never got off the ground.

Last year, the Legislature gave the drug another chance. Sen. Fred Mills, a Republican from St. Martin Parish, sponsored a law that allows people suffering from a limited set of conditions to use marijuana for medical reasons only.

Sheriffs and district attorneys opposed the legislation, but they made clear that adding chronic pain or post-traumatic stress disorder to the list of covered conditions would lead to all-out legislative war.

“We have in the past opposed adding chronic pain to that list because our information from colleagues in other states is that adding that condition has been a precursor to efforts to legalize” marijuana completely, said E. Pete Adams, executive director of the Louisiana District Attorneys Association.

“That condition has been abused,” Adams said. “Chronic pain is a vague diagnosis.”

Hill, the Harvard doctor, said that chronic pain’s absence from the list of covered conditions makes Louisiana an exception among states that have legalized medical marijuana.

State bureaucrats are now trying to build the practical apparatus for growing and selling medical marijuana. It will likely be at least 2018 before patients can actually buy medical marijuana legally in Louisiana.

In the meantime, some advocates are pushing to expand the list of conditions covered by the medical marijuana legislation.

Just before Mardi Gras, Kaczmarek returned to New Orleans. He has since joined a group called CommonSense NOLA that is pushing to have chronic pain added to the list.

“The wording of the bill is that if your pain is so severe and chronic as to warrant an opioid prescription, you should be able to participate in the state’s cannabis program,” said Kevin Caldwell, the group’s executive director.

“I’ve talked to so many veterans, so many people who are going through stories like Jerry’s, and they’re using cannabis in its raw form, but they are so terrified to come out and talk about it,” Caldwell said. “Should they also really live in fear of the police when they’re dealing with their ailments?”

The Orleans Parish Coroner’s Office recently announced that drug overdoses have now overtaken murder as a cause of death in New Orleans. Caldwell said that’s another sign that it’s time to expand Louisiana’s law so that patients can treat their pain with marijuana instead of pills.

Caldwell has met with a number of legislators in Baton Rouge, trying to find a sponsor for his legislation. So far, no one has agreed. As the Legislature grapples with gaping holes in the state budget, it seems unlikely that lawmakers will take the time this year to consider expanding medical marijuana.

“We're aware of no proposal to do that in this session,” said Adams, the lobbyist for the district attorneys.

“We gotta get a product out, and we got to show that medical marijuana does bring the results it’s intended to bring and what other states have seen success with,” he said. “We have to replicate that success in Louisiana, and once we do, then we can have further discussion.”

Can LSU's medical marijuana operations thrive? Some say the answer is no