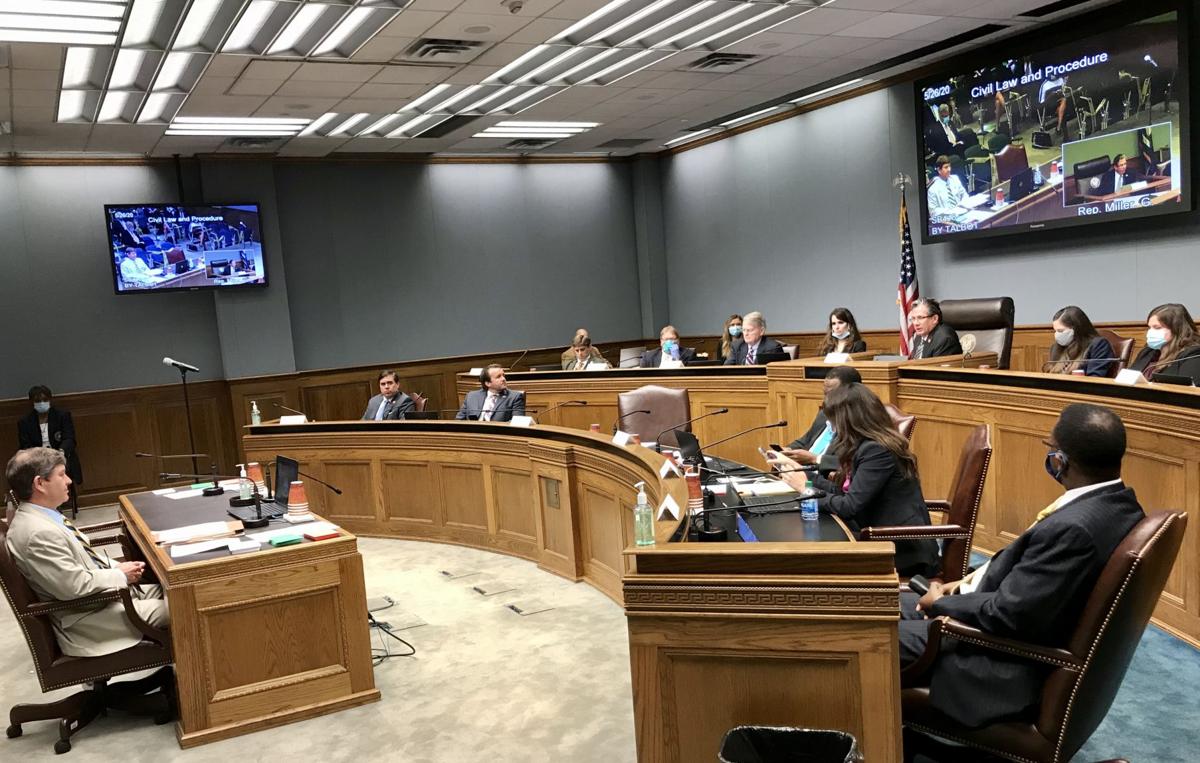 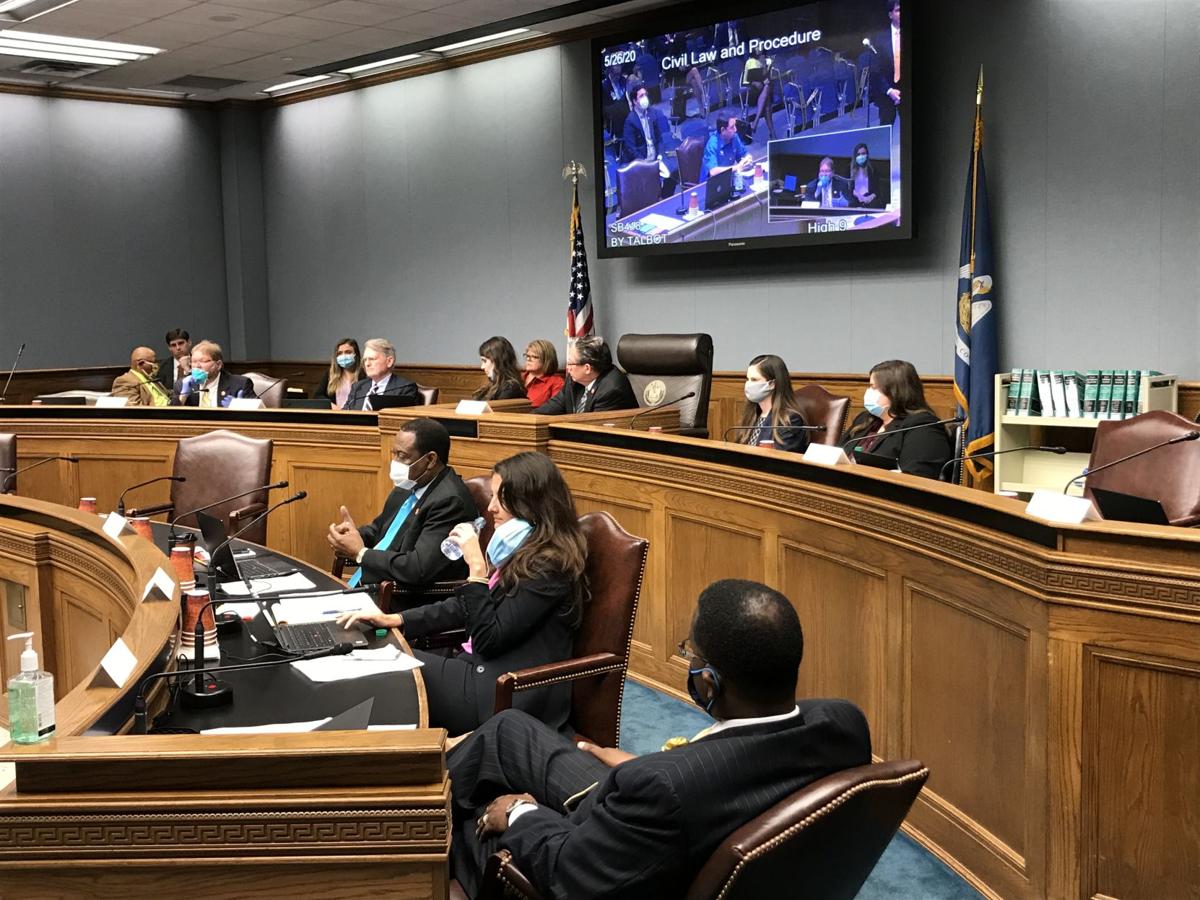 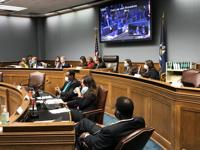 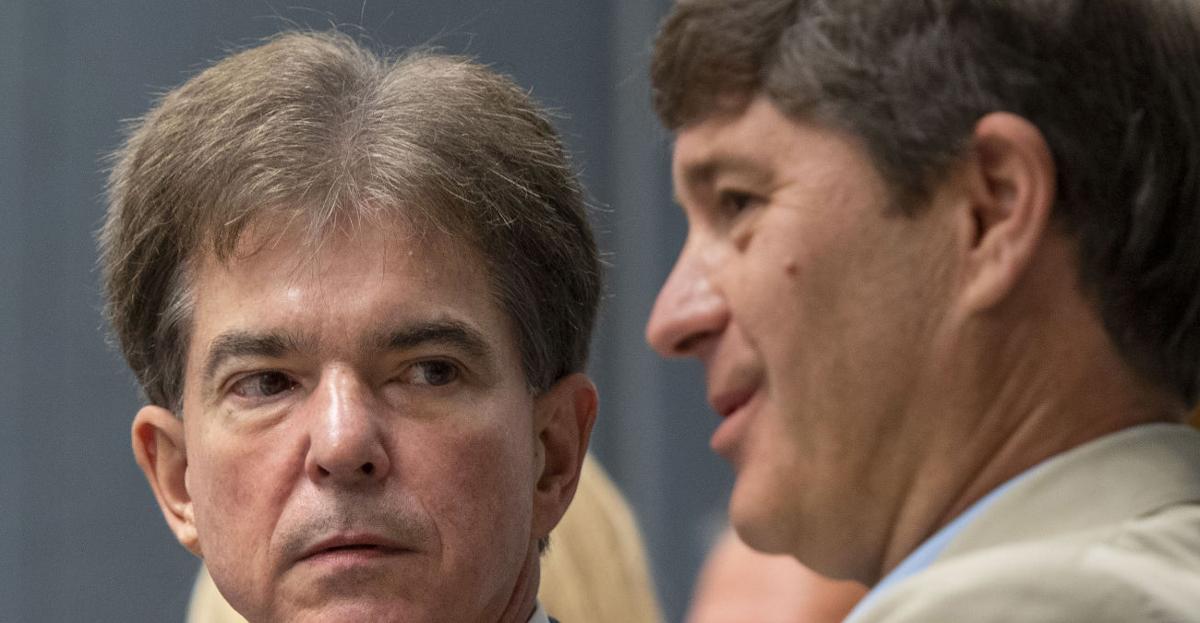 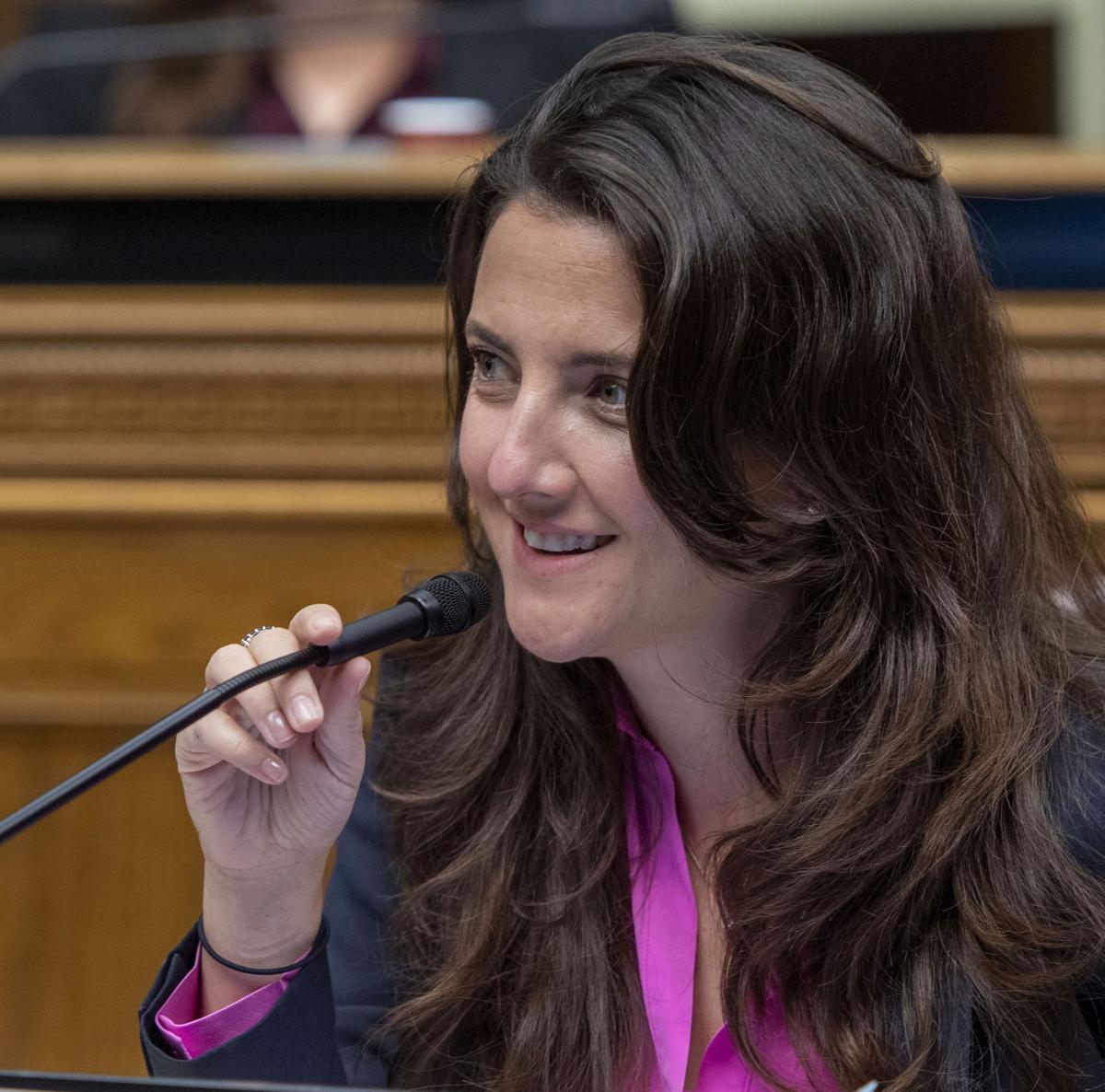 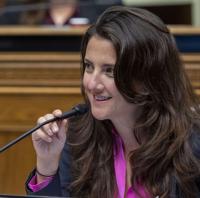 Attempting to keep the Coronavirus away, a House Asst. Sgt. at Arms member sprays disinfectant on a microphone after a person has testified as the House Committee on Civil Law and Procedure takes up SB418 concerning liability insurance operating budget Tuesday May 26, 2020, in Baton Rouge, La. Legislation that supporters say will lower auto insurance rates and opponents contend will seriously limit an injured personÕs ability to seek redress in courts cleared House committee 10-5 setting up a final vote later this week and a possible attempt to override an expected gubernatorial veto.

Attempting to keep the Coronavirus away, a House Asst. Sgt. at Arms member sprays disinfectant on a microphone after a person has testified as the House Committee on Civil Law and Procedure takes up SB418 concerning liability insurance operating budget Tuesday May 26, 2020, in Baton Rouge, La. Legislation that supporters say will lower auto insurance rates and opponents contend will seriously limit an injured personÕs ability to seek redress in courts cleared House committee 10-5 setting up a final vote later this week and a possible attempt to override an expected gubernatorial veto.

Legislation that supporters say will lower auto insurance rates and opponents contend will seriously limit an injured person’s ability to seek recompense through the courts cleared its last committee Tuesday, setting up a vote before the full House later this week.

Senate Bill 418 was amended and advanced by the House Civil Law & Procedure committee on a 10-5 vote.

If the measure clears the full House later this week, as expected, SB418 would have to return to the Senate for their agreement on the newly added language.

River Ridge Republican Sen. Kirk Talbot, the chief sponsor, said the legislation brings Louisiana into line with the way most other states handle civil trials, which insurance companies say need to be changed before they will do business in Louisiana.

"This system is not working for us," Talbot said. “If we do nothing, I promise you, the rates will go up."

“This (bill) is designed to lower the number of claims,” said New Orleans Democratic Rep. Mandie Landry. “I think it is harmful to a lot of people who get into accidents.

Called tort reform by its supporters, the Omnibus Premium Reduction Act of 2020 is the key Republican-backed bill that could lead to a historical attempt to override an expected veto by Democratic Gov. John Bel Edwards. The bill would dramatically change how people injured in car wrecks can seek – and receive – recompense through Louisiana courts.

The legislation cleared the Senate last week on a 29-8 vote – three more than needed to upset a governor’s refusal and turn the legislation into law. The House needs 70 votes to override.

However, support for a measure doesn’t always translate into a vote to override.

Supporters, including Insurance Commissioner Jim Donelon, who has pushed this legislation for years, promised the bill would reduce the price of car insurance policies by at least 10%, perhaps 25%, maybe more.

But, as opponents point out, the legislation doesn’t actually mandate those savings and they note that supporters have swatted away efforts to roll back the limitations put on individuals in court should the savings not be realized as had been the case in past tort reform efforts.

Back before Donelon took a state job about two decades ago, he was a state representative who chaired the House Insurance committee and worked as a lawyer who represented insurance companies in personal injury lawsuits involving collisions. He has successfully pushed varieties of legislation that limit how plaintiffs can go to court and win damages for their injuries. He claims that Louisiana's legal system is set up in a way that pressures insurance companies to pay more to settle cases in which the car wreck injuries are minor.

Moments after his sweeping “tort reform” legislation was spiked by a state Senate committee back in May, Rep. Kirk Talbot smiled and predicted…

As the House last week prepared to vote on the near-identical House Bill 9, Donelon forwarded a column and editorial published in The Advocate/Times-Picayune supporting the legislation. “Needless to say, it is long past time to fix this glaring problem that has been addressed multiple time over the past 25 years so that I urge you to vote in favor of HB9 and against any amendments to water down its provisions,” Donelon wrote.

Drive most places in Louisiana and you’ll see a lot of reasons for our rating as No. 2 in America in the cost of car insurance.

• Extend the deadline for filing a lawsuit from one year to two, called prescription. Both sides agree on this point, saying lawsuits often are filed to protect rights that could be settled with a few more months leeway.

• Lower the amount of damages sought in order to have the case heard by jury instead of a judge from $50,000 to $5,000, called jury threshold. Supporters say everyone is entitled to have their case heard by a jury. Opponents counter that the lower amount would slow resolution as the trial dockets fill up with minor cases that were once heard in lower courts. The jury threshold was established in 1984 – at the insistence of the business community – and raised to $50,000 in 1994 partially to keep the cases from ending up in city and parish courts, which don’t have authority to hold jury trials.

• Limit medical expenses recovered to the actual payments made, rather than what a health care provider often charges, called collateral source. Supporters say an injured plaintiff should be recompensed only what his or hers medical insurance actually paid out, rather than the usually higher “book value” of an injury’s treatment. Opponents point out that some treatments are not fully covered, such as, helicopter evacuations, of which insurance will pay just a fraction leaving the injured person on the hook for the rest.

• Require lawsuits to be filed against the other driver, rather than the insurance company, called direct action. Supporters argue that juries are more likely to hammer an insurance company than the individual, who after all is responsible for the accident. Opponents counter this section of the law essentially hides the insurers and the coverage from juries.

• Allow judges and juries to reduce damage awards if the injured plaintiff was not wearing a safety belt. Supporters contend that regardless of fault, a person who broke the law by not wearing seatbelts should not benefit from likely receiving harsher injuries. Opponents point out that the failings of the injured party doesn’t mitigate the fact that they were injured through an event not their fault and that proving what the injuries might have been had seatbelts been worn, will require expensive experts and thereby drive up the cost of litigation.

Last year’s version of the Omnibus bill cleared the House easily but ran into troubles before Senate Judiciary A committee. Then Republican Sen. Ryan Gatti, of Bossier City, during a May 2019 hearing, waved an analysis that had been ordered up by supporters but was never mentioned in testimony. The report by a handful of insurance actuaries, whose job is to calculate risk of various variables and set rates, determined the elements of the legislation would have little effect on the price charged for auto insurance policies in Louisiana.

Tuesday was tort reform day at the State Capitol and a Senate committee rejected two bills then sidelined a third.

The committee last year refused to advance the legislation for consideration by the full Senate, effectively killing the bill.

Moments after the defeat last year Talbot promised to make tort reform an issue in the upcoming political campaigns as did Stephen Waguespack of Louisiana Association of Business & Industry. Before the day was out, U.S. Rep. Ralph Abraham, an Alto Republican challenger to the Edwards reelection as governor, broadcast a Facebook video blaming his Democratic opponent for higher auto insurance rates.

Gatti’s reelection was targeted by LABI and insurance concerns. He lost to Sen. Robert Mills, a Bossier City Republican who took Gatti's place on Judiciary A committee. The $28,963.39 received from LABI and insurance PACs accounted for about 12% of the money Mills raised in the campaign, according to the Louisiana Board of Ethics. About 40 percent of those elected in 2019 are new to the Legislature and a good many arrived in Baton Rouge with passing sweeping tort reform at the top of their agendas.

About $3.5 million was spent by political action committees representing LABI, insurance companies and salesmen, as well as lawyers who represent individuals against businesses. Of that amount, 100 members of the 144 current representatives and senators received about $508,000 in campaign contributions from LABI and insurance PACs. Thirty-one members of the House and Senate received about $110,000 in direct contributions from legal community PACs.

Those numbers only reflect the intensity of the debate. The amount includes neither spending by groups that don’t have to reveal their donors nor contributions from individual salesmen or lawyers. The Louisiana Ethics Code doesn’t require donors to list their occupation or employers – the way most states do – making it nearly impossible to figure out how much money came from individuals working for the special interests.