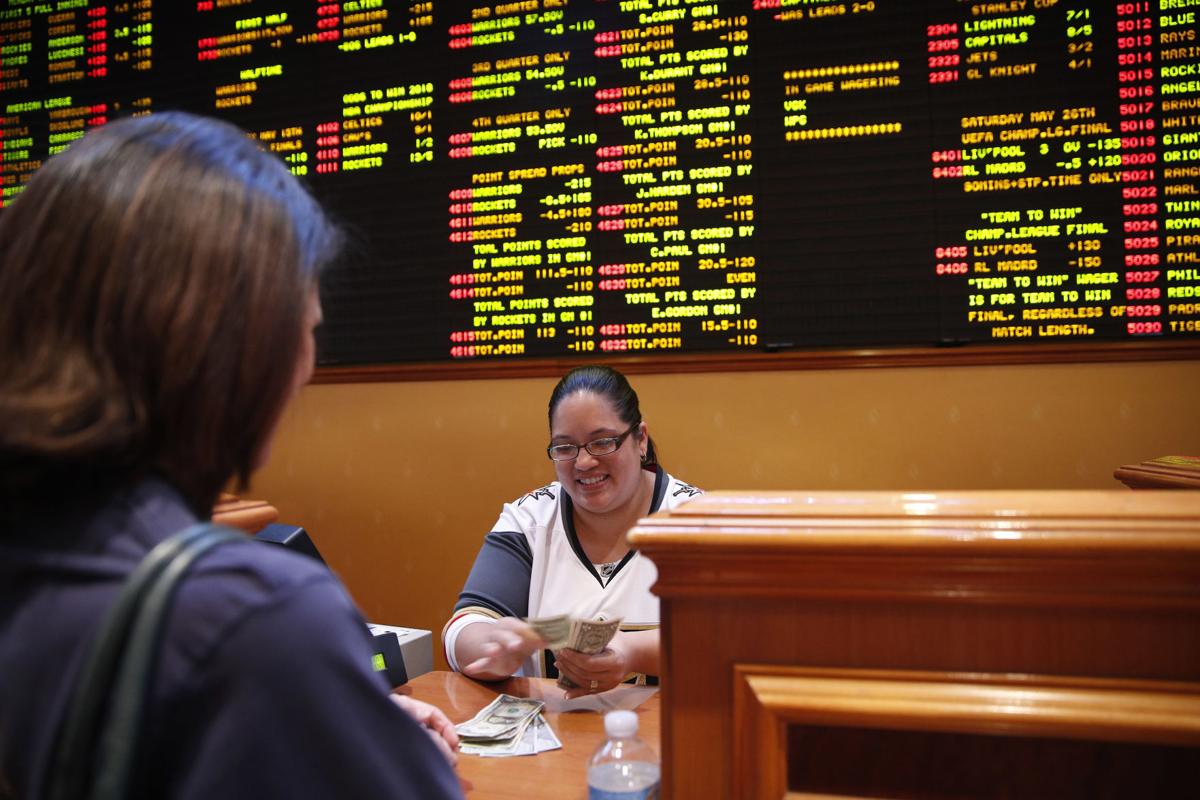 Crystal Kalahiki pays out a bet in the sports book at the South Point hotel-casino, Monday, May 14, 2018, in Las Vegas. 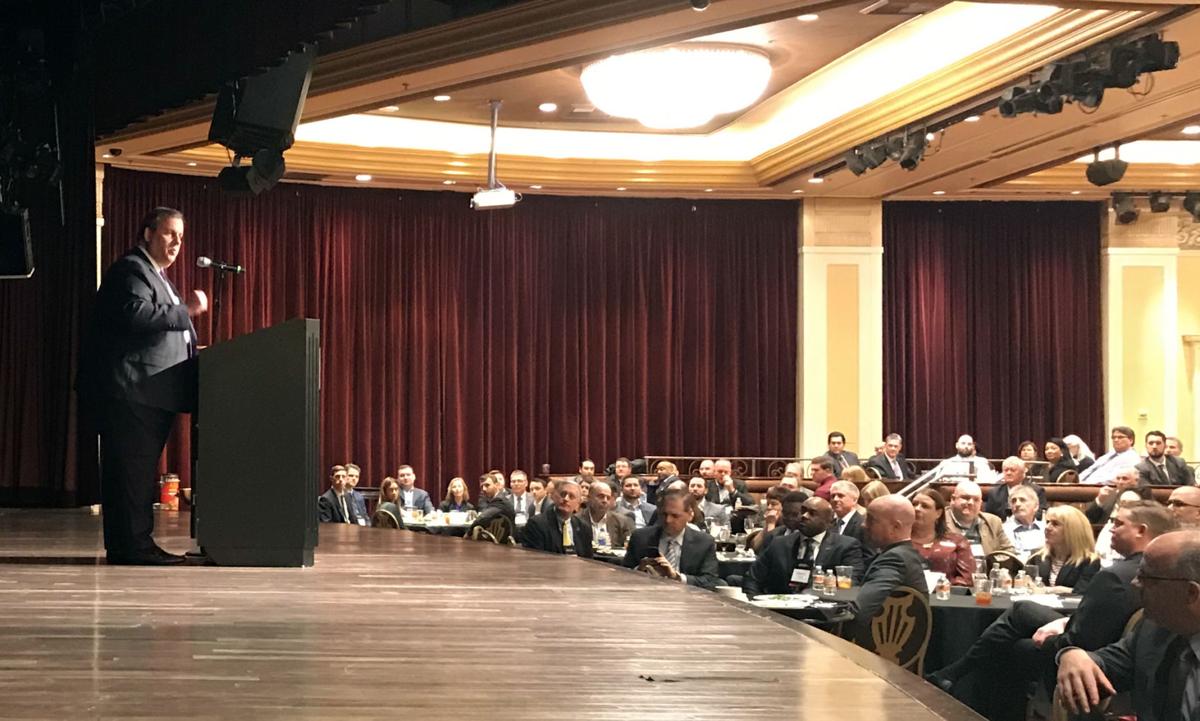 Former New Jersey Gov. Chris Christie discusses his landmark US Supreme Court ruling that paved the way for states to allow sports betting during a meeting of the National Council of Gaming State Legislators in New Orleans on Friday, Jan. 4, 2019.

Crystal Kalahiki pays out a bet in the sports book at the South Point hotel-casino, Monday, May 14, 2018, in Las Vegas.

Former New Jersey Gov. Chris Christie discusses his landmark US Supreme Court ruling that paved the way for states to allow sports betting during a meeting of the National Council of Gaming State Legislators in New Orleans on Friday, Jan. 4, 2019.

Bipartisan support is building around a plan to allow sports wagering in Louisiana casinos, but a host of issues have yet to be hashed out and it will likely be more than a year before the first bet is placed here.

Early childhood education advocates said Tuesday they were heartened to hear Gov. John Bel Edwards say he would be open to dedicating any reve…

Louisiana lawmakers are expected to take up sports betting legislation in the session that begins April 8. An attempt to allow voters to decide whether sports wagering should be legalized was unsuccessful last year.

“I feel certain that we will be debating it again this coming April,” said Sen. Ronnie Johns, R-Lake Charles, vice chairman of the Senate Judiciary B Committee where last year's sports wagering bill received its only favorable vote.

The U.S. Supreme Court ruled in May that Congress' 1992 Professional and Amateur Sports Protection Act was unconstitutional, after the law was challenged by New Jersey under then-Gov. Chris Christie. The law, commonly known as the Bradley Act, had effectively restricted states from allowing sports betting, with a few exceptions including Nevada.

The court's ruling set off a wave of legalization in other states. At least seven states have passed measures to allow sports betting, including Mississippi and Arkansas, and more are expected to take up proposals this year.

“I don’t think that’s in our best interest,” he said during a recent meeting of the Press Club of Baton Rouge.

Edwards, a Democrat who faces re-election this year, hasn't offered specifics about what he would like to see from legislation.

“There are many different ways that sports betting can be undertaken,” he said. “We’re trying to figure out what works for Louisiana.”

Likely not a major windfall

It’s unclear how much revenue Louisiana could expect to collect off the venture, though Edwards and Johns have both said they do not anticipate a "major windfall."

The American Gaming Association has estimated that annual revenue from legal sports betting in Louisiana would be between $245 million and $288 million. At the state's current taxing rate, that would translate to about $52.7 million to $62 million annually for the state's coffers.

The actual economic impact could be larger, proponents claim. Mississippi casinos have seen an uptick in other revenue sources — hotel stays, restaurant and bar tabs and charges for other amenities — since legalized sports wagering began.

“I think it’s something that we need to do and not for the sake of expanding gaming in Louisiana. It’s basically to insulate our current businesses,” Johns said. “We know we are starting to lose business to Mississippi.”

Lawmakers from around the country gathered in New Orleans last week for a National Council of Gaming State Legislators meeting at Harrah’s that was largely focused on sports betting. Christie, representatives from professional leagues, gambling industry bigwigs and other interested parties all presented their views on the issue.

Louisiana casinos are missing out on the busiest sports betting season — NFL playoffs up through NCAA basketball’s March Madness and the NBA playoffs in April.

“In talking to a number of the people who know a lot about it, the Super Bowl and March Madness are the two most active times of the year,” Johns said.

But unless the Louisiana Legislature decides to fast-track the legalization of sports wagering, the state likely will miss out on at least one more of those busy seasons next year, too.

State lawmakers are betting that they can successfully revive efforts to legalize sports wagering in Louisiana, as neighboring Mississippi rea…

Louisiana lawmakers in October were briefed on a report on the potential impact of sports wagering and advised that a voter referendum, as was proposed last year, would be the “cleanest way” to legalize sports betting here.

Johns said he agrees with the statewide referendum approach — giving voters the ultimate say in whether the state moves forward with the new form of gaming.

“Let the people vote on it,” he said. “It’s going to give the citizens statewide an opportunity to have a say so.”

Voters in November agreed to legalize online fantasy sports betting in 47 out of 64 parishes, indicating there may be a willingness to support other types of sports-related gambling.

Johns said he’s heard from several people who thought they were voting in favor of the kind of in-person sports wagering that has been embraced by other states since the court ruling.

If the Legislature agrees to put the legalization of sports betting on the ballot, it likely would go to the Oct. 12 election, when voters weigh in on statewide elections and legislative races. But there remains several specific issues that Louisiana legislators have never vetted.

The legislation proposed last year didn’t define a taxation rate or other regulatory issues that other states have addressed since the Supreme Court ruling.

Louisiana’s current 21.5 percent gaming tax rate is among the highest in the country and more than double that of Mississippi’s rate.

“If the tax rate is too high, we can’t compete with the illegal market that doesn’t pay taxes,” said Sara Slane, senior vice president of public affairs for the American Gaming Association.

ATLANTIC CITY, N.J. (AP) — The race to legalize sports betting is on now that the U.S. Supreme Court has allowed it in all 50 states, but will…

Lawmakers also didn’t delve deeply into the debate over “integrity fees” that some professional leagues have lobbied for that would give them a cut of the money off the venture. The NFL has not joined the “integrity fee” debate, instead pushing for lucrative partnerships and data sharing revenues.

Legislation in the coming year also could face scrutiny over where sports betting is allowed in Louisiana. The 2018 bill included all casinos, video poker operators and racinos.

And state lawmakers have yet to weigh in on whether mobile betting should be allowed on gambling facilities' premises, as some states have allowed.

Unless a companion bill contingent on the referendum’s passage also makes it through the Legislature in the upcoming session, Johns agreed it could be 2020 before Louisiana lawmakers work through those issues and establish a system for collecting revenue from sports betting or more clearly defining how it will operate. The state Gaming Control Board would have regulatory oversight.

Meanwhile, as Louisiana considers state-level legalization, the NFL, NBA, NCAA, MLB and NHL have argued that the practice should be regulated at the federal level. All fought New Jersey’s efforts to legalize sports betting.

The gaming industry and most states have pushed back against the push for federal oversight, arguing that states are better equipped to regulate the industry on their own turf.

“We think it’s essentially a solution in search of a problem,” Slane said. “Our industry standpoint is this is best left to the states.”

David Rebuck, director of the New Jersey Division of Gaming Enforcement, agreed that regulation is best left to the states.

“As a regulator, you love to have flexibility,” he said. “The greater flexibility you have in this area is good.”

Some of the professional sports leagues also have urged states to include language in their laws that require gaming establishments to pay them a portion of the revenue through “integrity fees."

Dan Spillane, senior vice president and assistant general counsel for the NBA, made the “integrity fee” pitch to lawmakers who gathered at the recent conference in New Orleans. No state, to date, has agreed to the proposal, though several have faced aggressive lobbying from pro leagues to do so.

“There is no sports betting without sports,” Spillane said. “It makes sense and is fair for us to be compensated for that.”

In addition to getting a cut of the money, leagues also want access to data, Spillane said to monitor for abnormalities that could raise eyebrows because the leagues worry about what would happen if a major scandal were to break out due to rigged betting.

“We’re not going to have a business anymore,” he said.

He said he believes that the sports part of the equation is essential to legalized sports betting and deserving of some form of compensation.

“We don’t think this is an unreasonable ask,” Spillane said. “I don’t think it’s going to cripple the (gambling) industry.”

'They don't deserve it'

After a bitter, years-long battle with the leagues, Christie, the former New Jersey governor, doesn’t have many positive things to say about how the leagues should factor into states’ plans for adopting sports wagering laws.

“Now they want money,” he said. “It doesn’t make any sense.”

Christie warned a packed banquet hall of legislators and industry types not to listen to their pleas.

“Given their conduct over the last seven years, they don’t deserve it,” he said. “If you do it, it’s rewarding bad behavior.”

He also advised that states should be much more concerned about input from their local gaming industries, rather than professional leagues that may not have a physical presence or compelling interest.

“(Gaming operators) are going to be creating jobs, generating tax revenue and being good corporate citizens of the state,” he said.

Louisiana is home to two major professional teams in New Orleans — the NFL’s Saints, who are still in the running to make it to the Super Bowl this year, and the NBA’s Pelicans.

The state has 15 riverboat casinos positioned on waterways throughout the state and one land-based casino, Harrah’s New Orleans. Additionally there are four race track facilities that allow gaming.

Quincy Raven, executive director of business development at Scientific Games, a company that has been heavily involved in the sports betting industry, said states like Louisiana need no more than look to states that have already legalized sports betting.

“From our perspective, it’s not necessarily the unknown. So many of these challenges have already been undertaken,” Raven said. “It’s here. It’s been understood. Will we have to work out wrinkles in the future? Of course, but that’s the nature of the business.”

Rebuck, the New Jersey enforcement chief, also agreed that states down the pipeline, like Louisiana, will have more knowledge from states that have already legalized sports wagering.

“I think there’s plenty of model legislation out there,” he told a room full of legislators at the gaming convention. “When you get into it new, you shouldn’t be fearful that you’d have to start from square one. You don’t. There are models out there right now that are time and true proven.”

How sports betting, early childhood education in Louisiana might become an unlikely alliance

The sponsor of sports betting legislation said Friday he is open to dedicating revenue from the enterprise for early childhood education, whic…