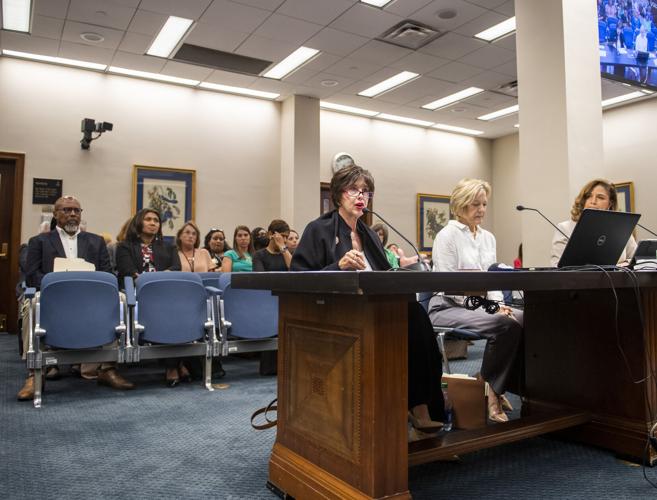 The Louisiana Department of Children and Family Services Secretary Marketa Garner Walters addresses the Senate Select Committee on Women and Children with members of her department at the Louisiana State Capitol on Monday, August 8, 2022 in Baton Rouge, Louisiana. 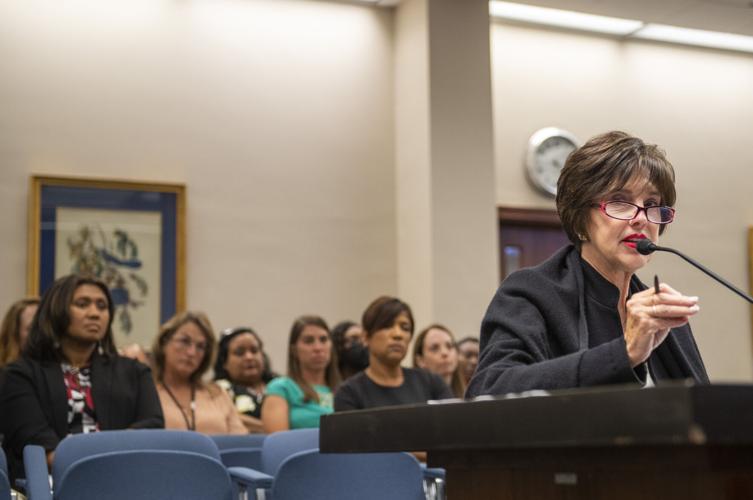 The Louisiana Department of Children and Family Services Secretary Marketa Garner Walters addresses the Senate Select Committee on Women and Children at the Louisiana State Capitol on Monday, August 8, 2022 in Baton Rouge, Louisiana.

The Louisiana Department of Children and Family Services Secretary Marketa Garner Walters addresses the Senate Select Committee on Women and Children with members of her department at the Louisiana State Capitol on Monday, August 8, 2022 in Baton Rouge, Louisiana.

The Louisiana Department of Children and Family Services Secretary Marketa Garner Walters addresses the Senate Select Committee on Women and Children at the Louisiana State Capitol on Monday, August 8, 2022 in Baton Rouge, Louisiana.

Days after a Baton Rouge mother was arrested in a case involving her toddler overdosing on fentanyl and dying, the Louisiana Department of Children and Family Services announced Monday that its caseworkers will immediately visit young children who are hospitalized under suspicion of abuse or neglect.

The 2-year-old who died from the fentanyl overdose, Mitchell Robinson, was hospitalized at least twice in the months leading up to his death. Though medical staff reported Robinson’s hospitalizations each time to DCFS, the child stayed in the care of his mother, Whitney Ard, who was arrested last week on a count of negligent homicide.

DCFS Secretary Marketa Garner Walters announced the policy change, which applies to children ages 3 and under, during a Monday hearing of the Senate Select Committee on Women and Children. Rhenda Hodnett, the assistant secretary for child welfare, said they’d been contemplating the change for a few months, but that Mitchell’s case prompted immediate action.

A DCFS memo announcing the policy change says it went into effect August 2. "Reports of alleged abuse/neglect involving a child under 3 by a medical provider will be accepted for investigation, unless approved for non-acceptance by a manager or consultant," the policy reads.

Previously, reports of abuse and neglect from medical providers were treated with the same approach as those from anyone else. DCFS' centralized intake staff would assign the reports a priority level based on the allegation of abuse, which could require follow-up from 24 hours to 5 days later, depending on the allegation.

While Walters would not discuss the specifics of that case Monday, she said after the hearing that workers’ handling of that case warranted disciplinary action.

The child’s case has prompted both an internal review from DCFS and an external investigation from the state’s Office of Inspector General. DCFS officials told legislators Monday that they were also still investigating, and said state confidentiality laws prevented them from sharing details.

While DCFS officials spent most of their testimony lamenting staff shortages and heavy caseloads, legislators responded that despite those factors, Mitchell’s death was unacceptable. They also questioned how a toddler being hospitalized with illegal drugs in his system did not demand an immediate response from DCFS.

“It’s horrific that we would miss it once,” said Sen. Katrina Jackson, D-Monroe. “It’s inexcusable that we missed it again. It’s almost criminal that they missed it a third time.”

DCFS officials have spent years warning legislators that the agency does not have enough staff and that pay is too low to attract and retain employees for grueling work.

Raises implemented at the beginning of the year increased entry-level pay for frontline caseworkers from $29,000 to $36,000 annually. Their job duties include knocking on doors amid family disputes, violence and drug usage; removing children from their homes in the middle of the night and transporting children to and from family visits, doctor appointments and more.

Barrow asked Walters what she would ask for to improve the agency if she had all of the money available to her. Walters said she’d immediately add 250 more frontline staff caseworkers, plus add staff attorneys for juvenile court and human resource managers.

Hodnett also said she’d heard from local pediatricians that DCFS could benefit from having its own medical director, making medical consultations readily available within the department.

“Mitchell Robinson,” Barrow said. “I want that baby’s life to be remembered for something good, even though it may have come out of tragedy.”

Editor's note: This story has been updated to clarify the time frame DCFS spent considering its policy change on medical referrals.