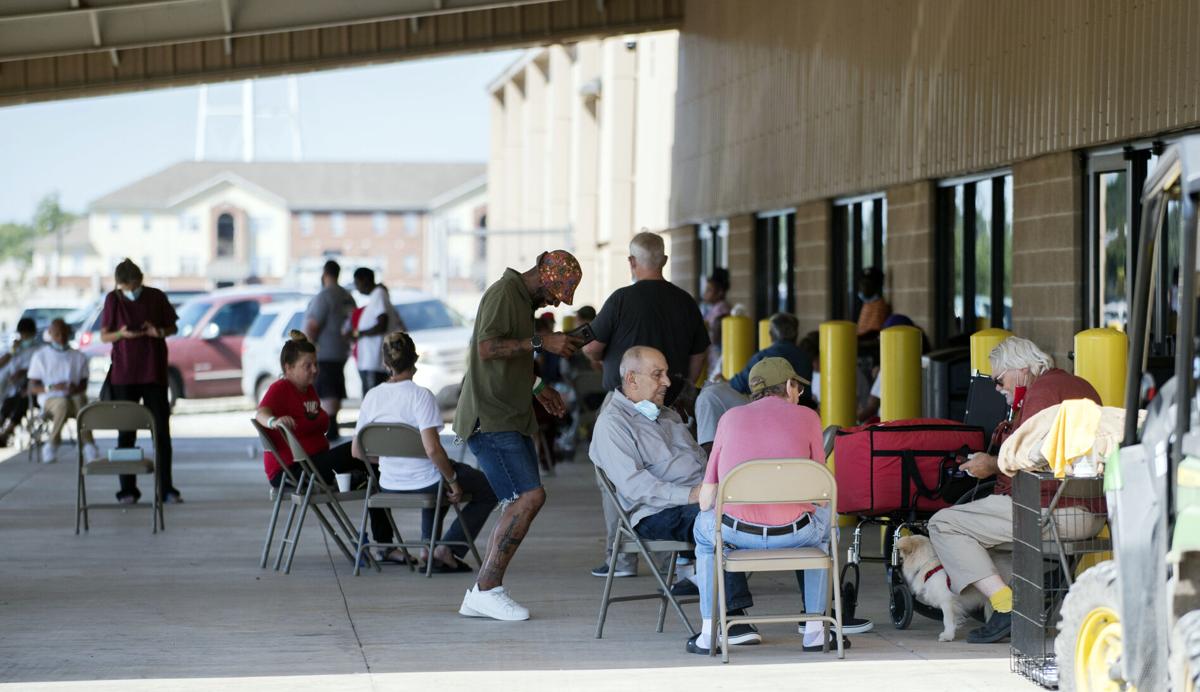 Evacuees spend time outside on the covered patio Thursday, September 9, 2021, at the Hurricane Ida megashelter in Alexandria, La. 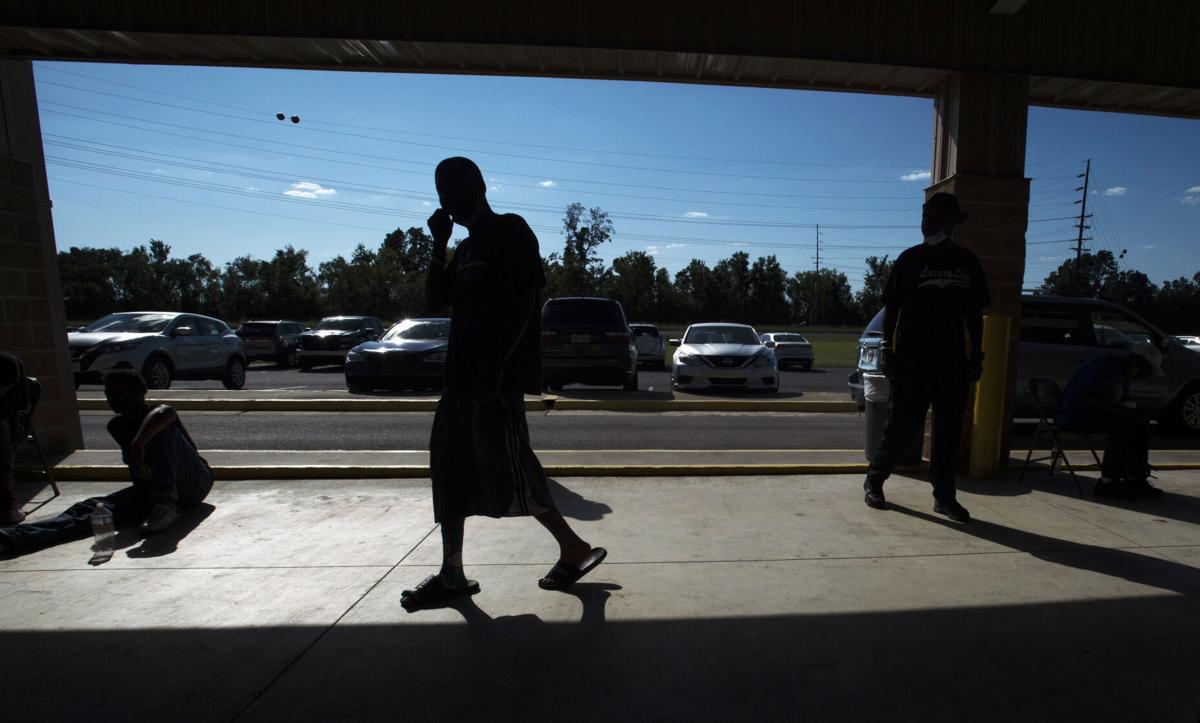 Evacuees mill about on the covered patio Thursday, September 9, 2021, at the Hurricane Ida megashelter in Alexandria, La. 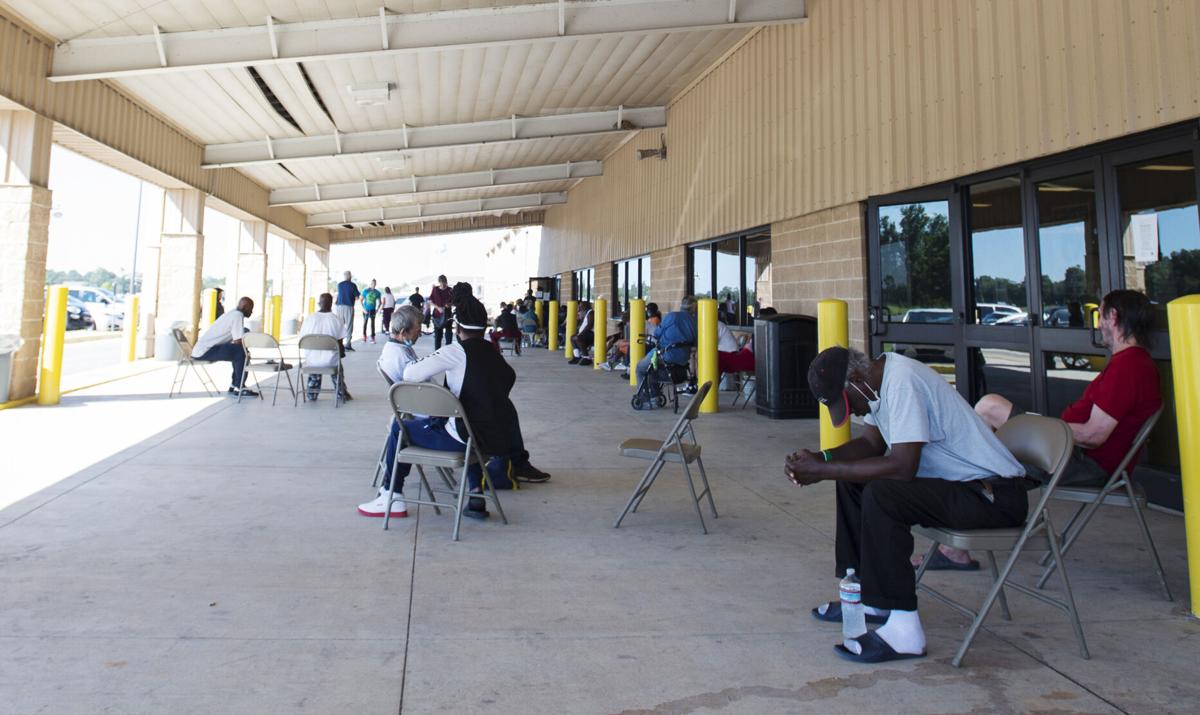 Evacuees sit outside on the covered patio Thursday, September 9, 2021, at the Hurricane Ida megashelter in Alexandria, La.

Ambulances are lined up outside Thursday, September 9, 2021, at the Hurricane Ida megashelter in Alexandria, La. 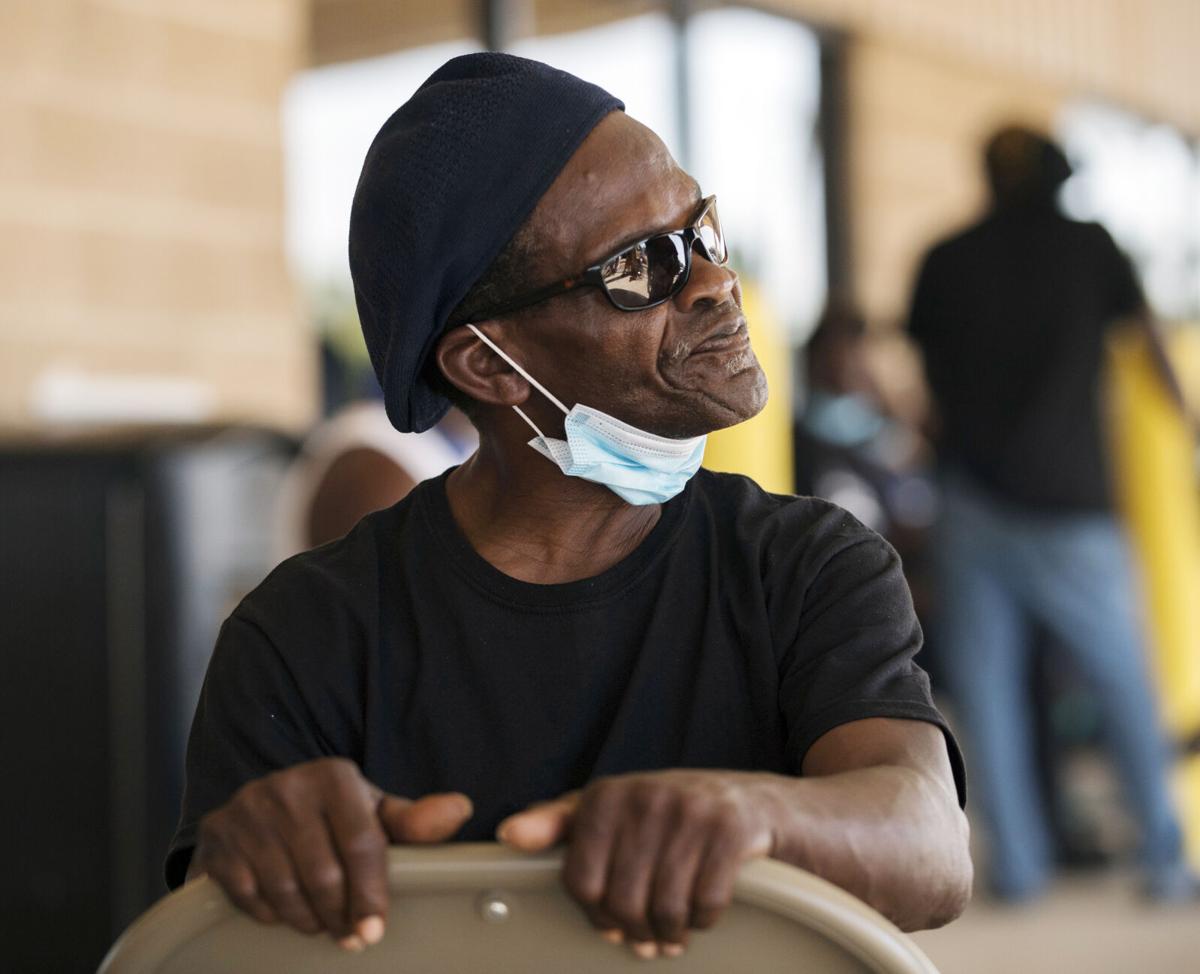 LaPlace evacuee Ronald Nabor sits outside on the covered patio Thursday, September 9, 2021, at the Hurricane Ida megashelter in Alexandria, La. 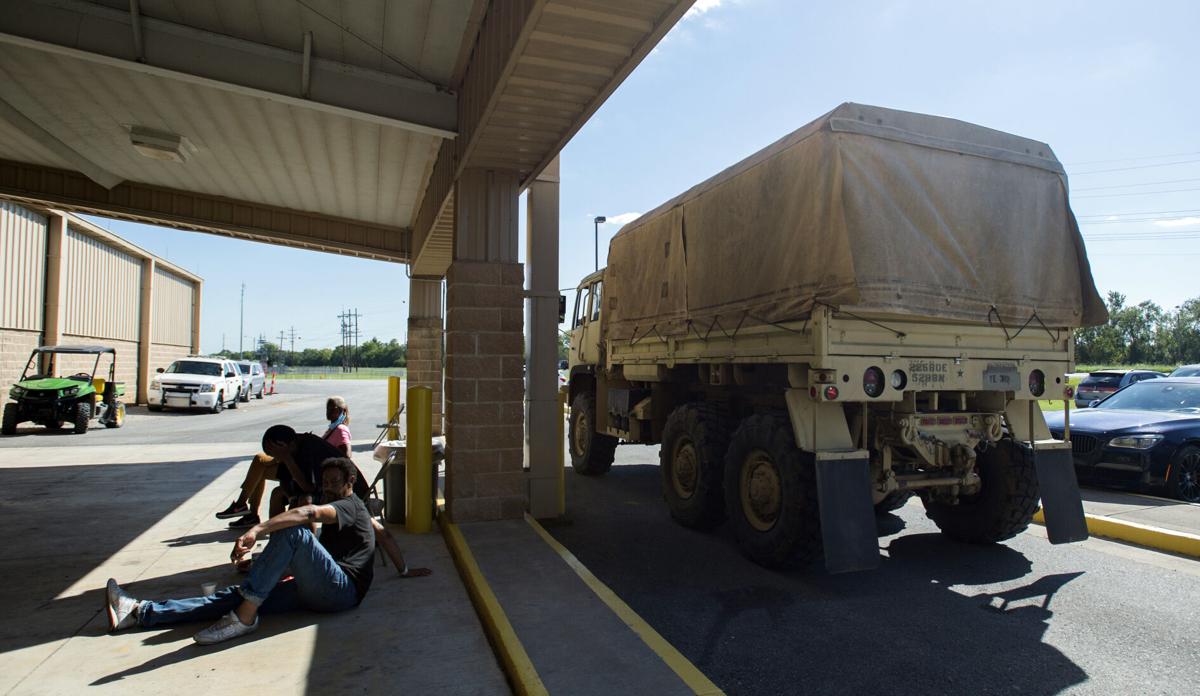 A National Guard truck passes by as evacuees sit outside on the covered patio Thursday, September 9, 2021, at the Hurricane Ida megashelter in Alexandria, La. 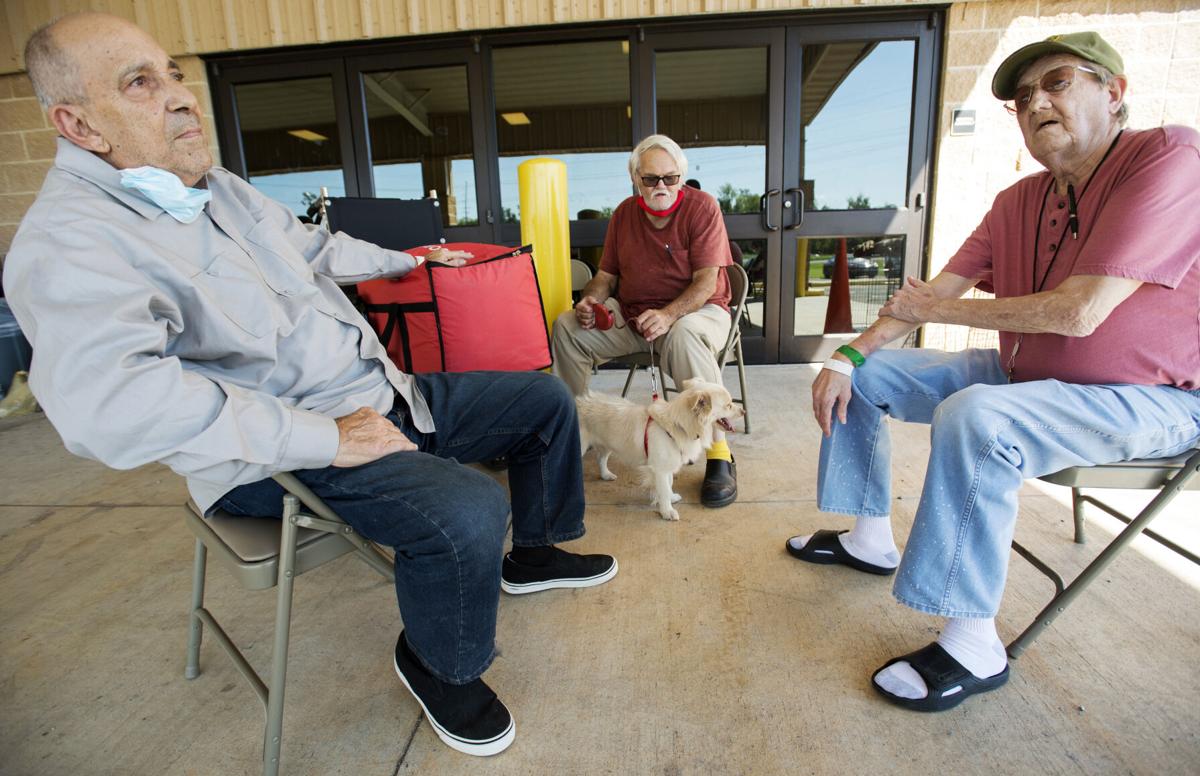 Evacuees spend time outside on the covered patio Thursday, September 9, 2021, at the Hurricane Ida megashelter in Alexandria, La.

Evacuees mill about on the covered patio Thursday, September 9, 2021, at the Hurricane Ida megashelter in Alexandria, La.

Evacuees sit outside on the covered patio Thursday, September 9, 2021, at the Hurricane Ida megashelter in Alexandria, La.

A National Guard truck passes by as evacuees sit outside on the covered patio Thursday, September 9, 2021, at the Hurricane Ida megashelter in Alexandria, La.

ALEXANDRIA – Susan Boudreaux sat in her rollator near the entrance to the mammoth state-run shelter she’s shared with hundreds of others since arriving on a school bus with her cat on Sept. 1, unsure when she’ll be able to leave. The senior apartments in Kenner where the 66-year-old lived were badly damaged by Hurricane Ida, and she has no relatives left who can take her in.

So she waits, sleeping in a cot and biding her time, eating food she says is often cold and unappetizing. Her rail-thin arms rest on the handles of the rollator, three wristbands dangling above her left hand: a green one to enter the shelter, a white one for her FEMA application and a purple one to be able to visit her 3-year-old, one-eyed cat, Baby Doll, being kept separately nearby.

“I’m trying to stay calm for the cat because they say if you get nervous and upset, then they’re nervous and upset,” said Boudreaux, who until Ida lived in the Westminster Tower senior apartments and who suffers from arthritis and pelvis fractures. “I figure it this way: Jesus Christ suffered on the cross for me, for all of us. I can endure.”

Nearly two weeks after the storm, many of the roughly 400 people at the state’s purpose-built “megashelter” in Alexandria sit in limbo. They’ve arrived from senior living centers, a rehab facility, a trailer park and damaged homes, taking hours-long bus rides to this remote area on the outskirts of the city, near Bayou Robert and the LSU-Alexandria campus. They were among 3,056 people still being sheltered at 19 locations statewide as of Thursday morning.

As Ida death toll rises and hurricane season continues, 'help is on the way' for Louisiana

The state’s post-Katrina project to provide a centrally located megashelter has given them cots to sleep on and three meals a day with a roof over their heads. But many who remain are unsure when they’ll get back home. Some lived in apartments that were heavily damaged or came from areas that remained without electricity. Others say they want to leave but can’t afford a ride back, so they have to wait.

One man from Algiers arrived equipped with his hair-cutting gear, setting up shop outside the building, where he carefully trimmed a mustache on Thursday afternoon. Another man said he had stolen a bus to get there, then quickly added that he had actually borrowed it and planned to return it. It was not clear if he was joking.

One group of people made a crawfish run, bringing back a cardboard container of mudbugs that they gave away for free. Some complained of having to pay $40 for roundtrip journeys to a nearby Wal-Mart, though an official at the shelter said free rides were being provided regularly and such profiteering would not be allowed if they were made aware of it. Many evacuees sit outside and smoke under the canopy over the entryway.

To enter, evacuees must pass through metal detectors, then make their way to sleeping areas with green cots lined up across the floor of the 5-acre building. The megashelter stretches out like a huge, multi-section gym, though one built to withstand 185 mph winds, its roof equipped with lightning rods that look like giant nails. There are several televisions inside, and evacuees say they are mostly tuned to the news.

Thirty-two pets were also being housed in the section reserved for them.

The megashelter can usually house up to 2,500 in its non-medical area, but capacity was reduced by half due to COVID-19, and precautions were in place such as distancing and mask-wearing.

The typical way evacuees arrived was through parishes transporting them to a pick-up location. From there, they were taken either to Alexandria or to one of two other state-run shelters in Shreveport and Bastrop by charter bus, said Department of Children and Family Services spokesman Sean Ellis. The state shelters are in addition to parish-run shelters around the state, making for a total of 19.

The shelter in Shreveport had the most evacuees among state-run facilities as of Thursday, since Orleans and Jefferson parishes had sent many of their residents there, said Ellis. It was housing 889.

A fifth nursing home resident who had been transferred to a Tangipahoa Parish warehouse ahead of Hurricane Ida has died.

State officials encouraged those still needing shelter to first make contact with their parish rather than simply showing up at one of the state shelters, since a more suitable option may be available. No date has been set for when the Alexandria shelter will close.

When parishes notify the state they are ready to bring evacuees back – either to their homes or a local shelter -- charter buses are arranged for the return trip. Those who want to leave before that can do so on their own. Some have sought and received other accommodations if they qualified, such as a FEMA-paid hotel room.

In such an environment, there were of course complaints, ranging from the reasonable to the absurd, such as one man annoyed that he couldn’t smoke inside. Many spoke of the air-conditioning being frigid, and lots described the food as being either cold or inedible. One man called it “prison food.” It often featured pork, several people said.

Beyond that, evacuees complained of uncomfortable cots and unruly children making noise late at night.

Daniel Doyle, the lead area manager for DCFS who is helping oversee the megashelter, noted the complexity in housing such a large group of people.

“We’re doing everything to meet the needs,” he said. “If anyone needs anything as far as any clothes, socks, shoes, we’re providing all of that. We do have a food vendor on site that’s preparing three hot meals per day.”

About 3,400 people were in state- and parish-operated shelters Friday, five days after Hurricane Ida swept through Louisiana leaving more than…

A number of people said they were simply trying to make the best of it through  boredom and challenging living conditions. Ronald Nabor, 64, left his five-story apartment building for seniors in hard-hit LaPlace a couple days after the storm and arrived in Alexandria aboard a state bus. When he left LaPlace, his building’s generator had gone out, there was no water and no cell service.

He said the shelter was not up to par, but he put the blame on evacuees instead of workers, adding that he had been treated “pretty fair.”

“We’ve been having some filthy bathrooms,” he said as he sat backwards on a folding chair outside the building. “They can’t put it on the employees not doing the job, because they’re doing the job. It’s just trifling people.”

As for when he’ll be able to go back, he said: “We got word that it’s going to be on the 17th but we’re not sure when the lights are going to be on. We don’t have any idea.”

Mary Lou Green, 70, decided to evacuate ahead of the storm from the house she shares with her son in St. Rose, first arriving at a local shelter before being transported to Alexandria. She said she was fine with the conditions, though she didn’t expect to be able to get back home until late in the month. Her son stayed at the house.

She was sitting outside next to Rick Braun, a 70-year-old with a prosthetic lower leg. Braun also lives in Westminster Tower, as does his 88-year-old mother. Because they were in wheelchairs, they were given a ride in the complex manager’s car, he said.

Sisters Karen Whittier, 57, and Deborrah Laurent, 67, said they’d like to return to the trailer they shared with their brother in St. Rose even though it took on significant damage. Asked how they pass the time, Whittier said “this is it” -- sitting outside talking, sleeping plenty and waiting for their names to be called by FEMA.

They spoke of a bizarre episode when they caught a woman who usually sleeps near them rifling through their bags in the middle of the night. She ran when they awoke, and the sisters said they didn’t bother reporting it to the police.

If they wait for St. Charles Parish to signal the OK for the state to return them, it could take a while. Entergy has estimated that the vast majority of residents there will not have power restored until Sept. 29.

“We have no way to get back to our brother until they’re ready to send us,” said Whittier. “We can’t afford it.”

Boudreaux said the timeframe for when she’ll be able to return to Kenner has ranged from the end of this month to mid-October. She said she manages despite the conditions, but was becoming fed up, adding she “can’t stay here indefinitely.”