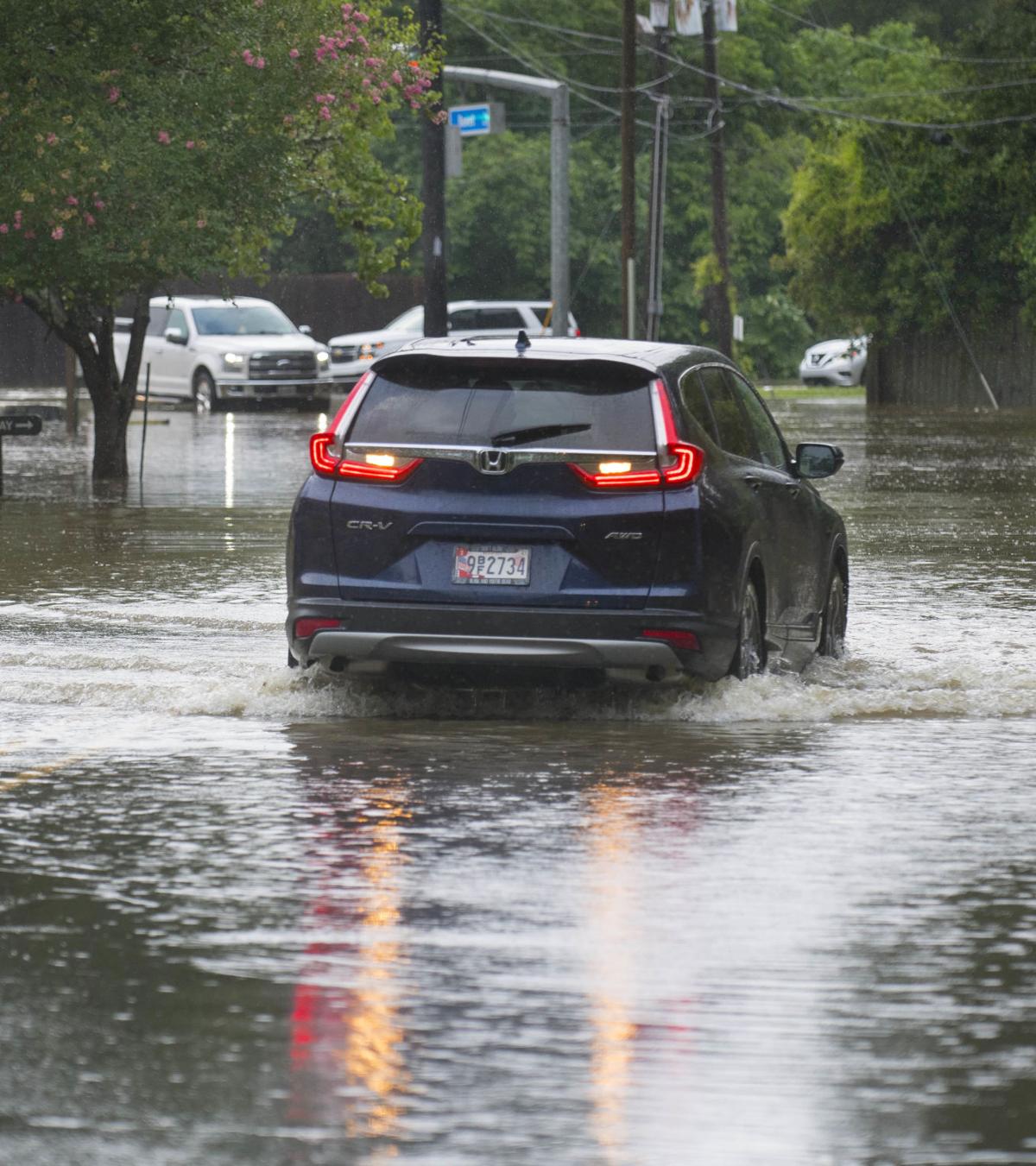 Backup lights come on as a motorist decides that receding floodwaters on Bawell Street near Acadian Thruway (background) are not quite passable yet, during flooding from heavy rains on June 6, 2019, in Baton Rouge, La. 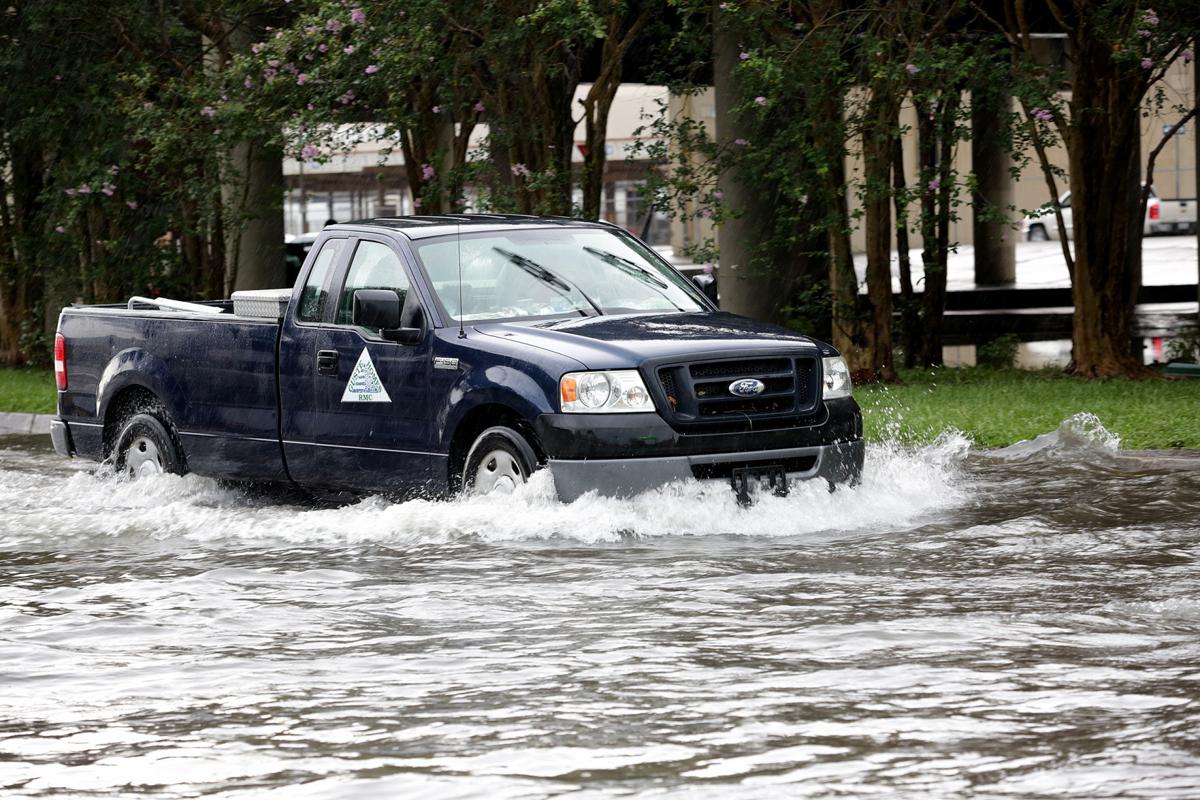 A truck navigates the flood waters at the corner of Simon Bolivar Avenue and Calliope Street after a heavy rain in New Orleans, Saturday July 20, 2019.

Backup lights come on as a motorist decides that receding floodwaters on Bawell Street near Acadian Thruway (background) are not quite passable yet, during flooding from heavy rains on June 6, 2019, in Baton Rouge, La.

A truck navigates the flood waters at the corner of Simon Bolivar Avenue and Calliope Street after a heavy rain in New Orleans, Saturday July 20, 2019.

If it seems like rainfalls in south Louisiana are becoming more intense and flash flooding more frequent, it’s not your imagination.

A new research study led by a team from LSU closely examined rainfall amounts in Louisiana over a period of decades and found that today’s showers, on average, are more intense and deposit their rain loads more quickly than they did in the early 60s.

The result is flash flooding that surprises and sometimes strands motorists and leaves streets and yards underwater before the rains soon move on.

A look at the damage after recent flooding in Baton Rouge: nearly 200 buildings, 100-plus cars

Heavy rains earlier this month that had streets, homes and vehicles awash with water, killed one person and spun off six tornadoes in the regi…

Barry Keim, state climatologist and professor at LSU, notes that these aren’t your typical afternoon storms that cap off hot summer days with a brief, cooling dose of precipitation. Rather, he said, these are “showers on steroids.”

And he and other researchers say these kinds of summer rains may be the new normal for south Louisiana.

Keim says a normal summer thunder shower starts with the morning sun which heats up the air above the ground. That heated air rises into the atmosphere through the day, bringing moisture with it. The water vapor condenses into cumulus clouds until enough droplets of water fill the clouds and then fall to the ground as rain.

Recent storms that have plagued the Baton Rouge and New Orleans area appear to be a supercharged version of this "convection storm" phenomenon, dropping more rain more quickly over a wider area. Indeed, the average amount of rain Louisiana gets each year has increased 20 percent to 30 percent in the past 100 years, according to a 2014 climate assessment.

Vinny Brown, an incoming assistant professor of research at LSU, has spent the past three years researching rainfall patterns. In a recent paper, he focused on rain between 1960 and 2017 in the 11 states, including Louisiana, that comprise the Southeastern United States. Keim served as his doctoral adviser.

Brown arrived in Baton Rouge from Tennessee just in time for the August 2016 floods. His research, though, has focused less on the increasing number of extreme weather events like that one and more on every day, or to be more precise, every hour weather.

He collected hourly rainfall data from 50 high-quality weather stations throughout the southeast, including gauges in Baton Rouge, Lake Charles, New Orleans and Shreveport.

While climatologists usually focus on daily precipitation, Brown wanted hourly data so he could zero in on individual rain showers, see how much rain they drop, how long they last, how intense they are.

He found that some things didn’t change much during those 58 years.

But other things did change. He found that today’s showers on the average are more intense and deposit their rain loads in a shorter period of time than they did in the early 60s.

“Increases in intensity were found across the entire region and occurred at 44 percent of the stations, suggesting that hourly rainfall is becoming more intense. At the same time, the duration of precipitation events was found to be decreasing at 82 percent of the stations,” Brown concluded in a forthcoming paper to be published in the Journal of Hydrometeorology.

These findings have important implications in a state like Louisiana, which is the wettest state in the lower 48 states, a state where about five percent of the time it’s raining, Brown said. The risk of flash flooding and soil runoff is growing, water quality is impacted, and infrastructure as well as urban planning may have to be rethought, he said.

Brown recently briefed leaders in New Orleans on his findings. He said officials there are trying to figure out what they need to do to adapt to the likely more intense weather of the future.

For instance, public alert systems may have to be tweaked and people's routine behavior may have to shift. Brown noted the July 10 storm that surprised New Orleanians with eight to 10 inches of intense rain.

“It could just be a normal day in New Orleans, and a convection shower breaks out and you could have eight to 10 inches of rain, enough to where you can’t get home right away,” he said. “You may just decide to stay where you are.”

Local, state and federal officials announced Wednesday they had come up with a way to complete a long-discussed but never-funded plan to dredg…

Keim points south for the reason why daily showers in Louisiana are getting wetter and more intense: the Gulf of Mexico. The surface temperatures there are rising. The heated air over the Gulf is pulled ashore and increases humidity. As evidence, Keim said dew points are hotter than they used to be. An increase of one degree Fahrenheit can increase humidity by 40 or 50 percent.

“All that water is just there for the taking,” he said. “It just needs the right mechanism to make it into rain.”

Data from the Climate Central, an independent organization of leading scientists and journalists that focuses on the changing climate, supports Keim’s point.

Between 1980 and 2015, the organization found that the average dew point during summer months increased in south Louisiana. The increase range from one degree in Lafayette, almost two degrees in Baton Rouge, to almost three degrees in New Orleans.

Harold Brooks, a senior research scientist in the forecast research and development division of the National Severe Storms Laboratory in Norman, Oklahoma, said these rising temperatures are closely related to levels of water vapor in the atmosphere and the potential for rainfall.

“As everything warms, water vapor in the atmosphere goes up and the precipitation rate goes up,” Brooks said.

Kevin Gilmore, a meteorologist with the National Weather Service in Slidell, agreed that the recent wet weather appears to be more intense than in the past.

“This is a lot more that we would typically be seeing,” Gilmore said.

The tell for Gilmore are the air balloon readings the Weather Service is getting that show the “water content” of the local atmosphere, or total “precipitable water.” That’s equates to all collected water vapor in a tall, vertical column of air, and it’s measured in inches like rainfall.

For instance, the Baton Rouge area usually has between an inch to two inches worth of vapor collective in a column of air, but those readings have topped that level on occasion recently.

“Typically when you get above two (inches), that is a lot of water,” Gilmore said.

“They will typically rain themselves out in one spot,” Gilmore said.

Three years after floods swept across portions of southern Louisiana, only 36 percent of homeowners who applied for help through the Restore L…