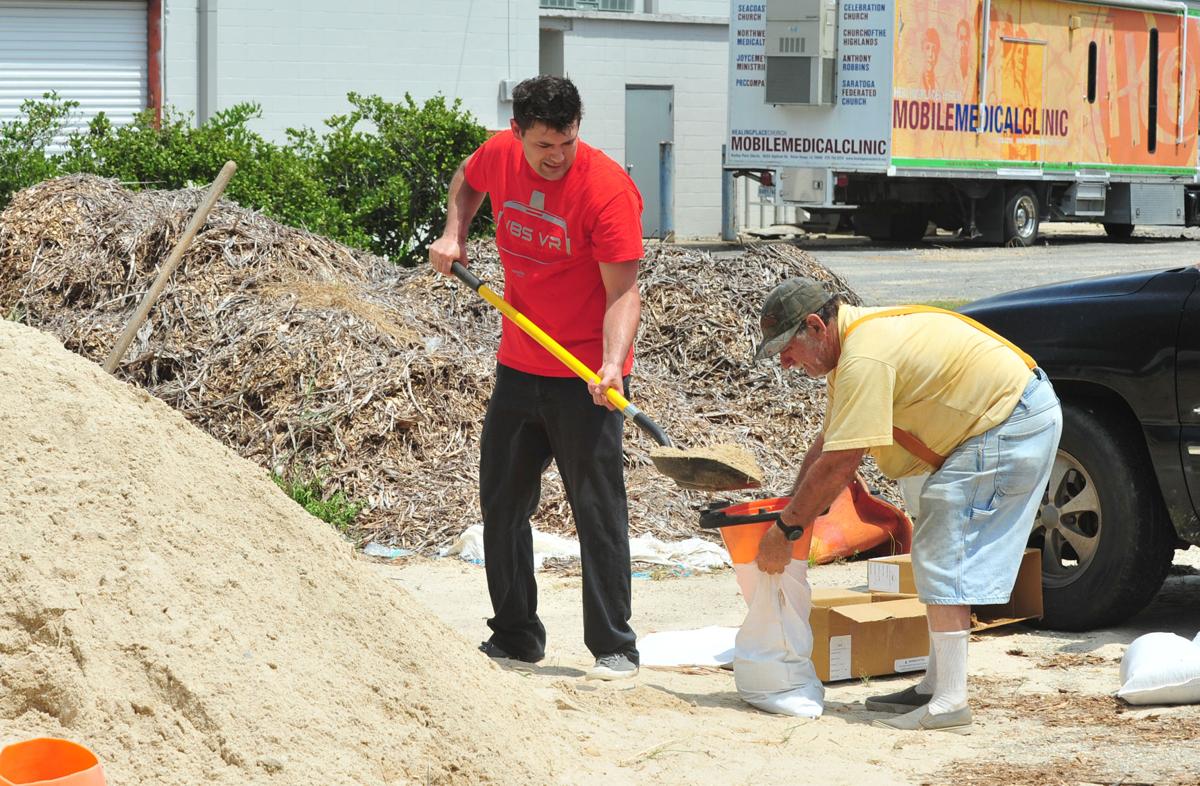 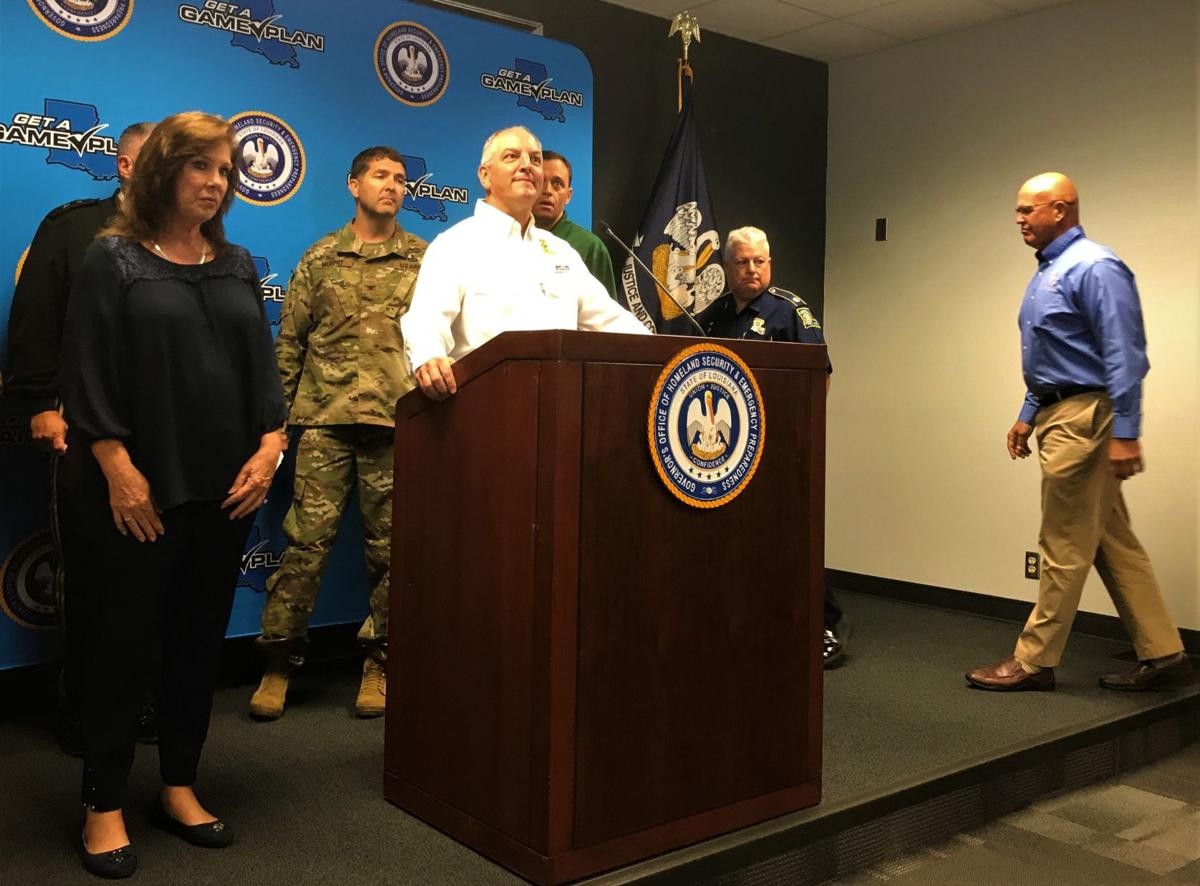 Louisiana Gov. John Bel Edwards expects up to 15 inches of rain on Friday and Saturday and expects some Mississippi River levees to be overtopped south of New Orleans.

“This is going to be a very significant weather event. It would be, in and of itself, but if you look at the fact that we got the elevated Mississippi River and we’ve had more rainfall in Louisiana over the last several months than normal, you know that it makes it much harder to deal with events of this type,” Edwards at a Wednesday morning briefing from the state Office of Homeland Security and Emergency Preparedness in Baton Rouge.

“It’s going to be a heavy rainfall event,” he said, adding that he has not yet decided whether to open evacuation shelters.

Shortly after lunch, the governor declared a state of emergency for the impact of the low-pressure system, called Invest 92L. The order sets in motion several sets of laws, such as limiting increases in gasoline prices, not normally enforced. The order shall remain in effect from July 10, 2019, to August 8, 2019, unless terminated sooner. Edwards said administration officials are looking at requesting a federal declaration, which opens avenues to disaster aid, prior to the rain coming ashore.

Edwards, who cut short a campaign tour around the state, spent Tuesday night and Wednesday morning getting briefed on weather predictions and disaster preparedness in what is expected to be fairly rough weekend for south Louisiana.

Nasty weather bands already are hitting the New Orleans area and the southern coast from a storm is forming in the Gulf of Mexico.

The storms in New Orleans is not being caused by the offshore storm that will impact the state this weekend, Edwards said.

Depending on how far off shore the eye forms, the system could become a tropical storm, maybe even a hurricane. At the very least the system is expected to dump inches of rain, even feet in some areas, from Wednesday through the weekend.

An area of low pressure in the Gulf is expected to drift slowly westward over the warm waters near the coastline over the next few days. The National Hurricane Center predicts a 90% chance of development. The system likely will be named a tropical depression Wednesday and could be tagged as Tropical Storm Barry by Thursday.

The Mississippi River levels have been higher than usual for 257 days. The river’s flood stage will exacerbate the storm’s impact on Louisiana, particularly if the brunt hits the southeastern part of the state as many of the tracking models suggest, Edwards said.

The potential storm surge could raise water levels up three feet in the New Orleans and could overtop river levees in Plaquemines Parish, the governor said.

Officials are looking at the most vulnerable spots as being south of Oakville, about 6 miles downriver from Belle Chasse on La. Hwy. 23, on the West Bank and south of Caernarvon near the St. Bernard State Park across from English Turn on La. Hwy. 46 on the East Bank.

“Right now, we believe any overtopping of the levees will be of relatively short duration, about 12 hours, but that is still a very, very significant hazard,” Edwards said.

Plaquemines Parish officials are deciding now if and when to evacuate.

Memories are still fresh from the August 2016 storm that dumped more than 20 inches of rain in several south Louisiana parishes from Lafayette to Baton Rouge to Hammond. Thirteen people died and tens of thousands of homes and businesses flooded, particularly along the Amite and Comite river systems.

“The fact of the matter is if mother nature dumps between 10 and 15 inches of rain over 24 hours we’re going to have flooding,” Edwards said. “We will know much better in 24 hours, we believe, on what we can expect in terms of storm intensity. We’ll have a better idea of tracking and so forth.”

Disaster preparedness officials will convene again Thursday morning and the governor will give another public briefing around 12:30 p.m.

Edwards said he wants disaster relief in place prior to the storm’s arrival in Louisiana.

FEMA is already on the ground, Edwards said.

And the National Guard is moving high water vehicles and manning up command posts primarily in Plaquemines Parish and southeast Louisiana. In addition to soldiers, Wildlife & Fisheries agents, Fire Marshals, state troopers and other state personnel are being placed prior to the storm’s arrival.

John Bel Edwards declares state of emergency; Louisiana preparing for up to 15 inches of rain by Saturday

Louisiana Gov. John Bel Edwards expects up to 15 inches of rain on Friday and Saturday and expects some Mississippi River levees to be overtop…

Sterling Ford was named by Ford Motor Company as one of only 323 dealers in the United States to earn the brand’s 2018 President’s Club Award,…

A Creole-speaking Texan with music skills that cover traditional, contemporary zydeco — and then some — is set to lead the Zydeco Capital Jam …