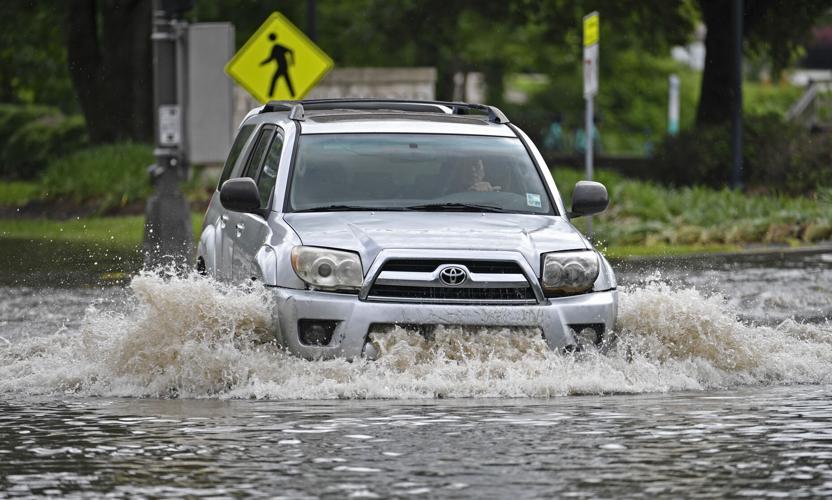 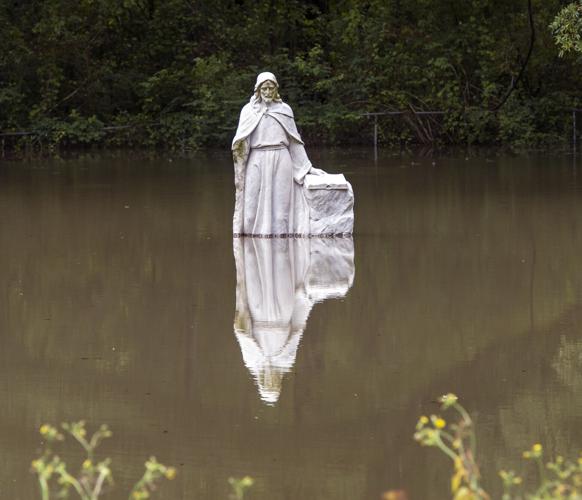 A statue of Jesus is reflected in the flood waters covering the cemetery hiding the markers on Old Jefferson Hwy near Azalea Lakes Tuesday May 18, 2021, in Baton Rouge, La. 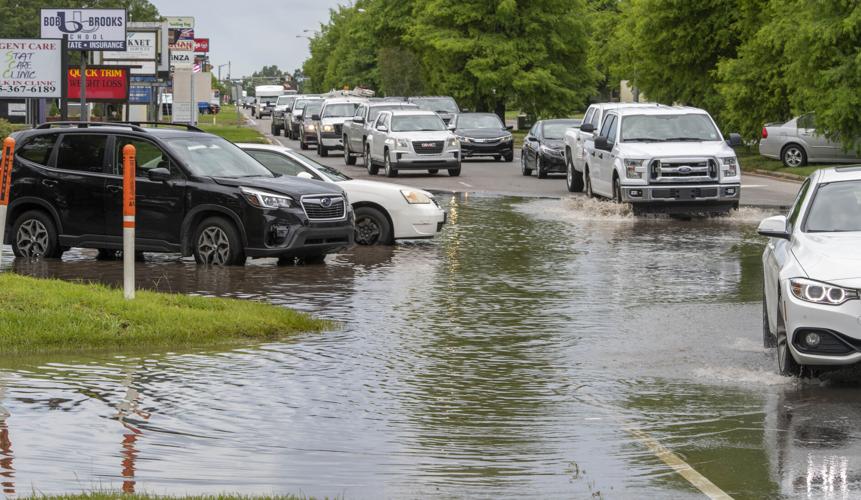 Traffic travelling north on Sherwood Forest Boulevard in Baton Rouge merges into one lane to go through the high water and around the two dead cars because of flooding Tuesday. 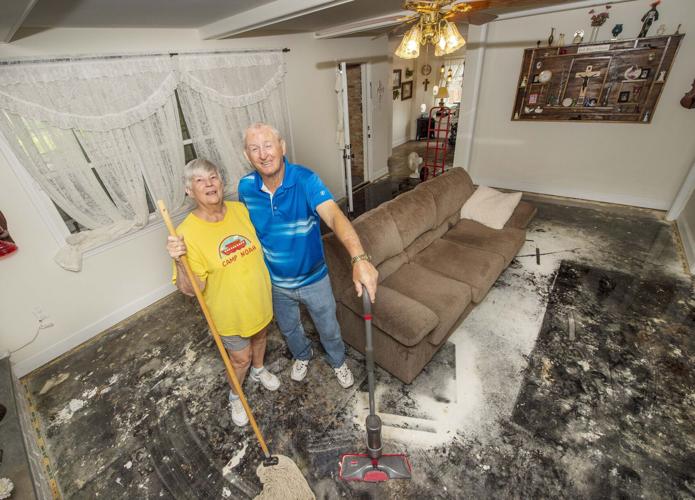 Holding mops, Jan and John Intres stand in the water laced livingroom after removing the soaked carpet and padding in their flooded home Tuesday May 18, 2021, in Baton Rouge, La. 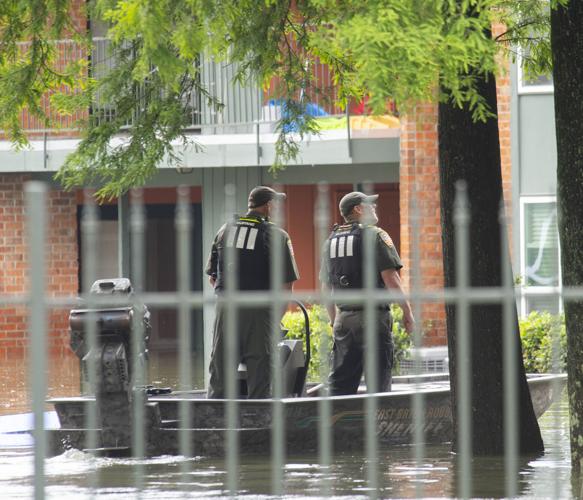 East Baton Rouge Parish Sheriff's Dept. deputies in a boat call out for any last people at the Siegen Calais Apartments, where residents trapped by high water flooding the parking lot of the complex were ferried out by boat on Tuesday, May 18, 2021, after Monday night's deluge of rain. 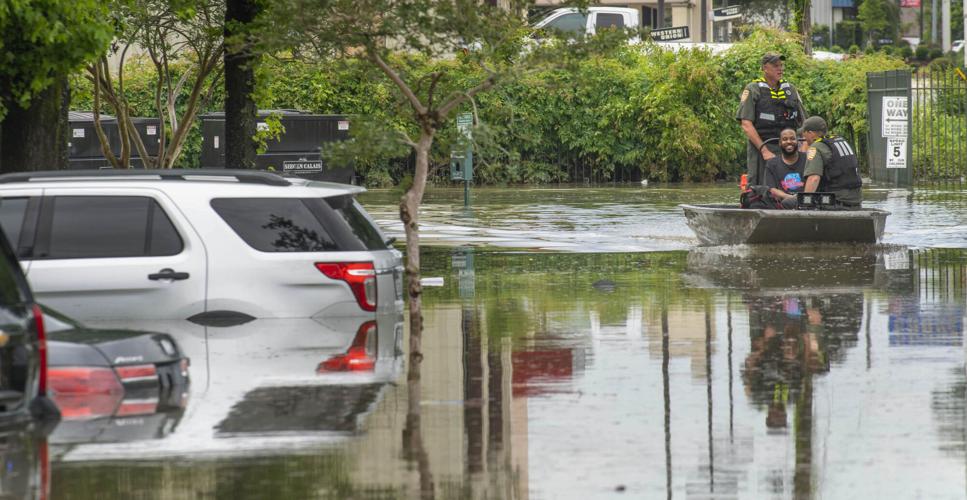 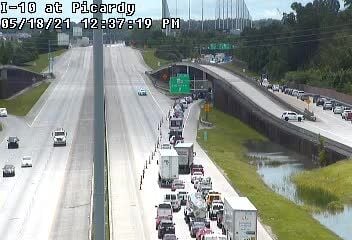 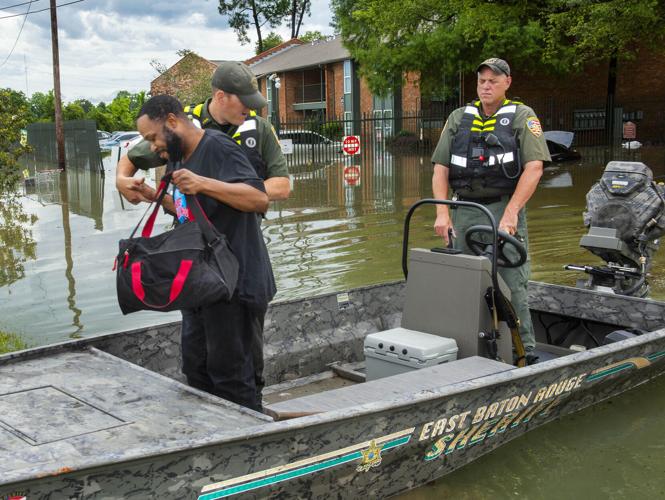 A statue of Jesus is reflected in the flood waters covering the cemetery hiding the markers on Old Jefferson Hwy near Azalea Lakes Tuesday May 18, 2021, in Baton Rouge, La.

Traffic travelling north on Sherwood Forest Boulevard in Baton Rouge merges into one lane to go through the high water and around the two dead cars because of flooding Tuesday.

Holding mops, Jan and John Intres stand in the water laced livingroom after removing the soaked carpet and padding in their flooded home Tuesday May 18, 2021, in Baton Rouge, La.

East Baton Rouge Parish Sheriff's Dept. deputies in a boat call out for any last people at the Siegen Calais Apartments, where residents trapped by high water flooding the parking lot of the complex were ferried out by boat on Tuesday, May 18, 2021, after Monday night's deluge of rain.

The first flash flood warning to pop up on his cellphone didn’t much faze Bobby Simmons.

“I didn’t really think anything of it,” he said. “I didn’t think it was going to be that severe.”

But over the next few hours that brought late Monday to early Tuesday, the stormwater at Siegen Calais Apartments in Baton Rouge kept “rising and rising,” the 35-year-old tenant recounted.

“It got past the air conditioners,” he said, “and before you knew it, it was past the first floor.”

That’s when some of his ground-level neighbors came knocking on his second-story unit. “When I saw them run upstairs,” he said, “I knew it was really serious.”

Baton Rouge is no stranger to seasonal deluge — some places are still recovering from the unprecedented flood that displaced thousands of people in 2016. But the 13.7 inches of rainfall that doused parts of the capitol region over a few-hour span early this week took even storm-weathered residents off guard.

By meteorological measure, it was a once-in-a-century rainfall — that is, one with just a 1% likelihood of occurring in a given year.

The fast-falling rain from a slow-moving storm overwhelmed roadside drains, causing flash floods that swallowed up cars and left hundreds of people stranded.

In East Baton Rouge Parish alone, firefighters say they brought more than 250 people to higher ground and a few dozen to a temporary shelter at the airport.

Some parts of Southeast Baton Rouge Parish and surrounding areas saw as much as 13.7 inches of rain Monday night, the National Weather Service…

Cars stalled by rising waters were abandoned on both sides of I-10 and neighborhood streets, blocking traffic well into the next day.

One person died in a submerged car on Bluebonnet Boulevard, by the Mall of Louisiana. Another driver died after crashing into a canal in West Baton Rouge, Gov. John Bel Edwards said in a Tuesday afternoon press conference.

Two other casualties stemmed from medical equipment failures amid power outages, he said.

“Our hearts are truly breaking,” Edwards told reporters as rain began picking up after a sunny, hours-long lull in the storm. “I’m sorry that you are having to deal with this again.”

“As we prepare for the potential of more rains, I want to ease your fears,” Broome said. “We’re not under the same threat as we were in 2016 at this time.”

‘I've never seen so much water’

This time, she wasn’t so lucky.

The 47-year-old mother of six said her house in the Westminster neighborhood off of I-10 took on about 5 inches of water as the clock struck midnight between Monday and Tuesday. When the sun rose about six hours later, it illuminated a street choked by stalled vehicles and lawns strewn with trash, family photos and other personal mementos.

“I’ve never seen so much water here,” she marveled the next morning, as volunteers zipped in and out of her house to clear debris and retrieve valuables.

Drainage outlets at nearby Ward’s Creek have flap gates that normally prevent water from backing up in Punkay’s neighborhood, she noted. Once they close, however, the water stops draining until the creek lowers.

On Baker Drive, where Punkay lives in a 60-year-old house across from her in-laws, the flood hovered about hip-high until about 1:30 a.m. Tuesday. Then, she said, it began to recede. By mid-morning, the water had retreated; the cleanup commenced.

‘They can't raise the whole city’

John and Jan Intres had just cozied up in bed to watch a TV show when they heard the gurgling water. “I said, ‘Oh my, that’s a familiar sound,’” 73-year-old Jan Intres recalled.

It took no more than 20 minutes before the water was knee-deep in their yard and seeping into their Buckingham Avenue home, just off Old Hammond Highway, where much of the neighborhood suffered during the ’16 floods.

The waters rose and fell before daybreak as frustration and heartache kept mounting, the Intreses said.

“It’s a mess and it will continue to be a mess,” Jan Intres lamented.

In apartments north of LSU, people wake up to flooded streets, overflowing canals

Makayla Johnson, 22, just finished a two-week COVID quarantine and looked forward to going out for the first time Tuesday. But when she left h…

Some of her neighbors still live in trailers five years after being flooded out of their homes.

“There’s not a whole lot the city can do,” Jan Intres reflected. “They can’t raise the whole city.”

Other residents wondered whether someone could have at least given them more warning.

The waters rose so fast at Siegen Calais Apartments that Francisco Cerda said he only had time to rescue his wife. Everything else — medicine, cash, immigration papers, Social Security cards — he left behind as the flood overtook their first-floor unit.

Cerda, 61, showed up the next morning to survey the damage.

From the sidewalk outside the black iron fence of Siegen Calais, he said he didn’t understand why they didn’t hear any guidance on when and how to evacuate. He also questioned why the landlord wasn’t more forthcoming about past flooding at the property.

“They know it’s going to happen one day again,” he said. “They need to do something about it.”

Last time the area flooded, Cerda said, the waters rose even higher. So, when the rain intensified late Monday, he said somebody should have given them some direction.

“Why did they not explain to you and say, ‘Please leave your apartment, and just lock it and you could come back later,’” he asked. “I don’t know why they didn’t do that – why? Because this isn’t the first time it happened.”

At least his loved ones are safe, Cerda added. Right now, he’s figuring out where he and his wife will stay. He’ll worry about the material things later.

That’s the message Roy Walker was trying to impart.

The 47-year-old principal of Baker Middle School rushed to the waterlogged apartment complex early Tuesday after a resident near and dear to him called for help.

“Well, I got a call from my nurse — my school nurse,” said Walker, clad in rubber boots, camo pants and a black T-shirt. “She needed to be rescued. She knew I had a boat. So, I didn’t hesitate. She took care of my babies at school, so I take care of her.”

No tally yet on flooded Baton Rouge homes, but 2021 is nothing like 2016, mayor says

By mid-morning, Walker estimated that he helped more than a dozen people out of the apartments. Since some residents remained unaccounted for at the time, he continued circling the property in his boat. “When I go around, I blow my horn,” he said, “and that’s bringing people out.”

While boating people back-and-forth to retrieve clothing and medicine, he said he’s been telling them that “this is a double-edged sword, a blessing in disguise.”

“Because they’re still here,” he explained, “and this materialistic stuff, they’ll get it back.”

Even so, Bobby Simmons said, it’s overwhelming to think about. Though his house is spared because he lives on the second floor, he said his car’s totaled.

“Debt is going through my mind right now — what type of debt I’m going to be in,” he said after hopping off Walker’s boat, as sirens blared in the distance.

He said he’s going to have “a lot of making-up” to do.

But he said he really feels for other people, the families with kids, his downstairs neighbors, the ones who lost everything.

Baton Rouge flooding: how the rain got so bad, how it stacks up to 2016, and what's coming next

The bands of rain that pummeled the Baton Rouge region Monday night and Tuesday morning, causing widespread flash flooding, were expected to c…