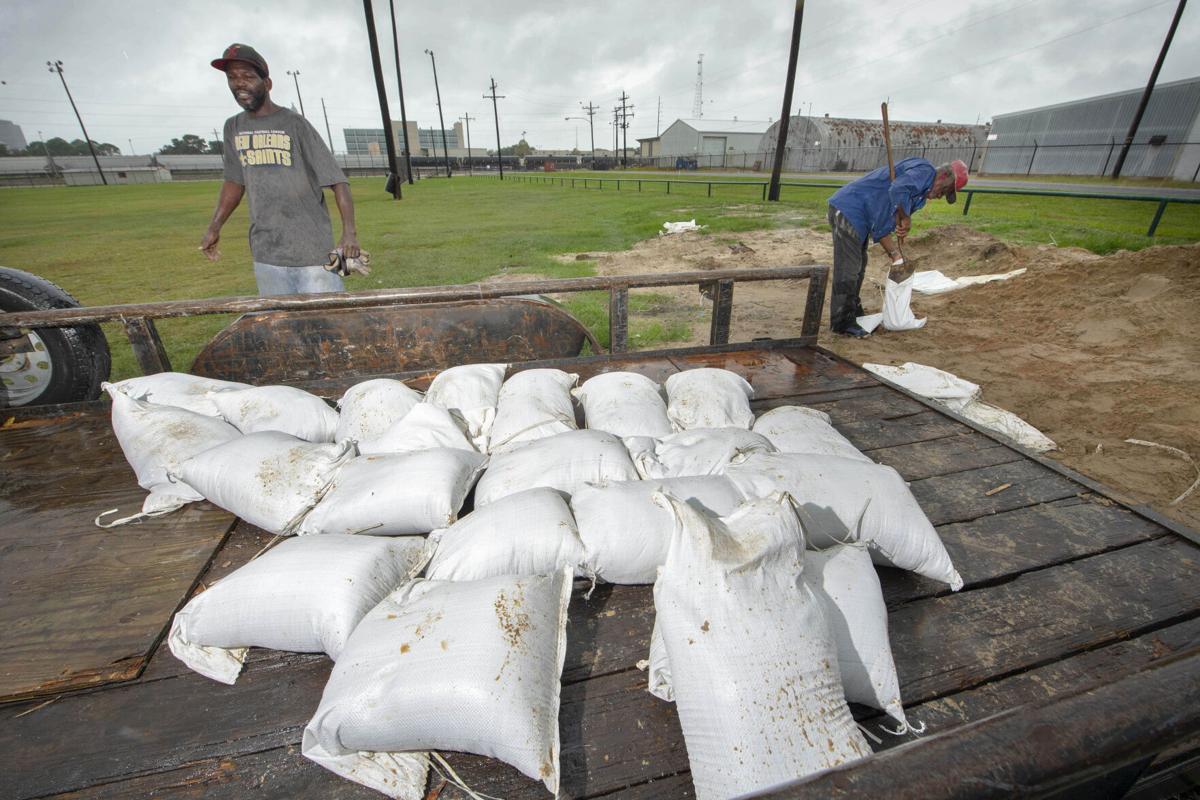 Curtis Youngblood, left, loads sandbags onto a flatbed trailer outside BREC's Memorial Stadium, to place strategically around his home, with help from Joseph Burden, right, Wednesday, Oct. 28, 2020 in advance of the arrival in the Baton Rouge area of Hurricane Zeta. 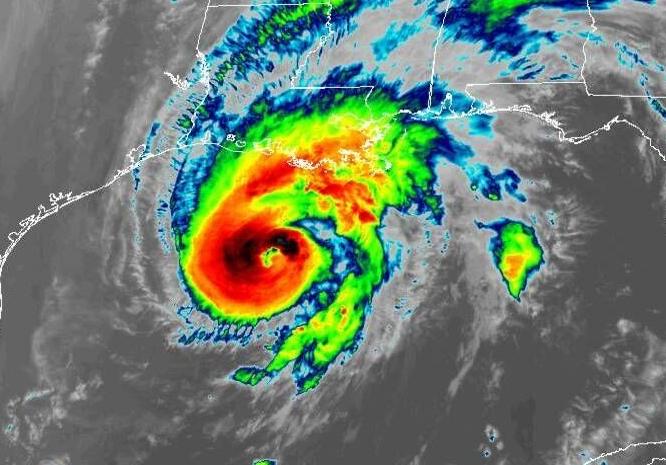 Hurricane Zeta is seen on satellite at 11 a.m. Wednesday. (Image via NOAA) 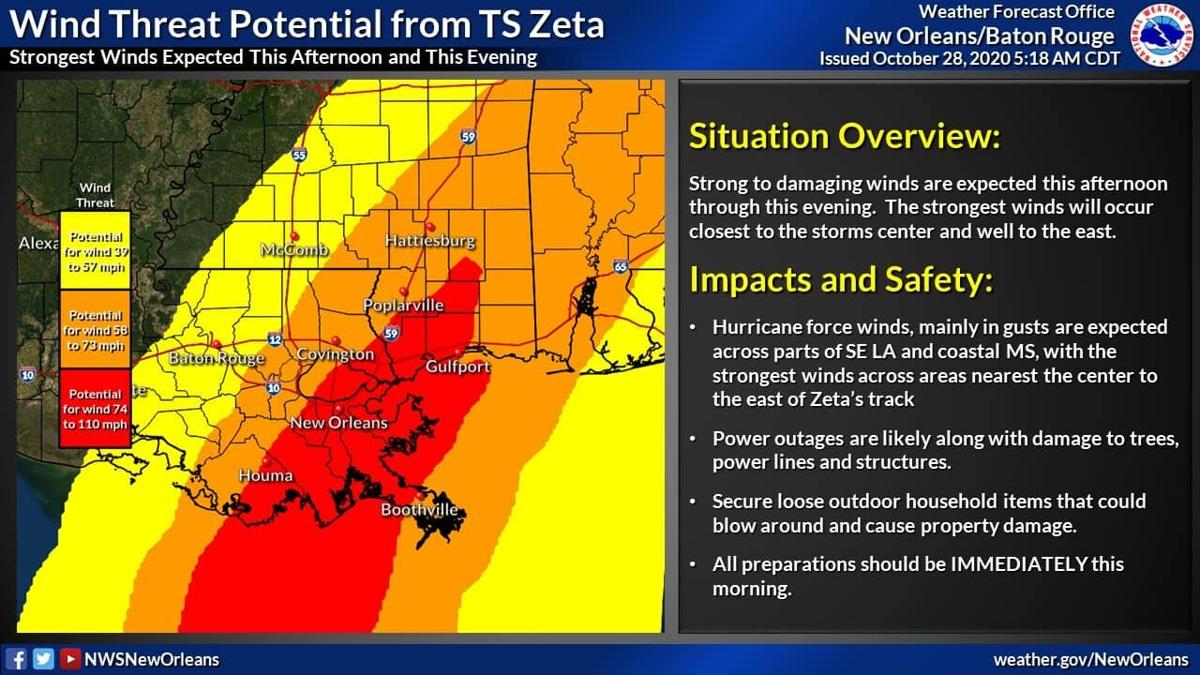 Curtis Youngblood, left, loads sandbags onto a flatbed trailer outside BREC's Memorial Stadium, to place strategically around his home, with help from Joseph Burden, right, Wednesday, Oct. 28, 2020 in advance of the arrival in the Baton Rouge area of Hurricane Zeta.

Hurricane Zeta is seen on satellite at 11 a.m. Wednesday. (Image via NOAA)

The central part of Baton Rouge can expect some wind and rain, but Category 2 Hurricane Zeta will reserve its most severe impacts on the metro area for suburban and outlying parishes to the south and east, the National Weather Service says.

Portions of Ascension, Assumption, Livingston, St. James and Tangipahoa parishes can expect sustained winds of 40 to 50 mph per hour or greater in spots as Zeta makes landfall around 4 p.m. Wednesday as a possible Category 2 storm.

The hurricane is expected to cut across eastern New Orleans and parts of St. Bernard and Plaquemines parishes.

"You're gonna see some wind, probably some rain," said Bob Wagner, a meteorologist with the National Weather Service office in Slidell. "But any of the real bad conditions, people in Baton Rouge proper probably aren't going to see a whole lot. But they aren't going to have to go very far east to find it."

Even parts of far eastern East Baton Rouge Parish could see winds of 30 to 40 mph, he said.

Overnight, the National Hurricane Center increased the forecast wind intensity of Hurricane Zeta, upping its rating from a Category 1 storm to possibly a Category 2 storm by landfall.

Under the Saffir-Simpson scale, storms gain the Category 2 rating when sustained winds range from 96 to 110 mph.

As of 1 p.m. Wednesday, Zeta had fulfilled that earlier forecast and became a Category 2 storm with sustained winds reaching 100 mph. Gusts had reached 115 mph.

The National Hurricane Center said wind intensity also varies significantly by quadrant, with the worst in the northeast sector. The storm's quick moving bands also pose the risk of spinning off tornadoes.

Wagner added that Zeta is moving quickly, about 18 mph currently, and so won't have a lot of time to weaken over cooler waters in the northern Gulf of Mexico. In addition, expected wind sheer, which tends to weaken a hurricane's power, hasn't materialized as expected.

"And one thing hurricane experts will tell you, intensity is the toughest portion of a hurricane to forecast accurately," Wagner said.

The increased wind intensity for Zeta sparked adjustments Wednesday morning by local governments and schools that had expected to be east of the Zeta's forecast track and to have avoided its worst effects.

East Baton Rouge Parish and Livingston schools announced Wednesday morning that classes would be dismissing early due to the expected earlier arrival time for winds, which could affect transportation. Livingston schools are also planning to delay the start of school Thursday by one to assess possible damage.

Wednesday's meeting of the East Baton Rouge Parish Metro Council has been cancelled due to Hurricane Zeta.

Officials in the city-parish and Ascension Parish governments announced they were closing offices early, at midday. The city-parish has also partially activated its emergency operations center.

St. James is one of four parishes in the greater Baton Rouge area under a hurricane warning. The others are Ascension, Assumption and Livingston parishes, the National Weather Service says. Southern Tangipahoa Parish is also under a storm surge warning.

Ascension officials said in a statement they expected the parish to begin feeling the effects of Zeta by midday and for the parish to receive about six hours of tropical storm force winds from the afternoon to the evening.

"While hurricane force winds are not expected, strong gusts cannot be ruled out," the statement says.

Rain has been less of a concern with Hurricane Zeta, but it will bring some.

The central portions of East Baton Rouge Parish could see less than an inch of rain, while Ascension, Assumption, St. James could see around 1 to 3 inches, Wagner said. Tangipahoa could see 2 to 3 inches.

Wagner added that if a hurricane band sets up over an area, rainfall totals could be significantly higher.

CONVENT — St. James Parish government will open an evacuation shelter noon Wednesday inside the Lutcher High School gym due to the increased i…