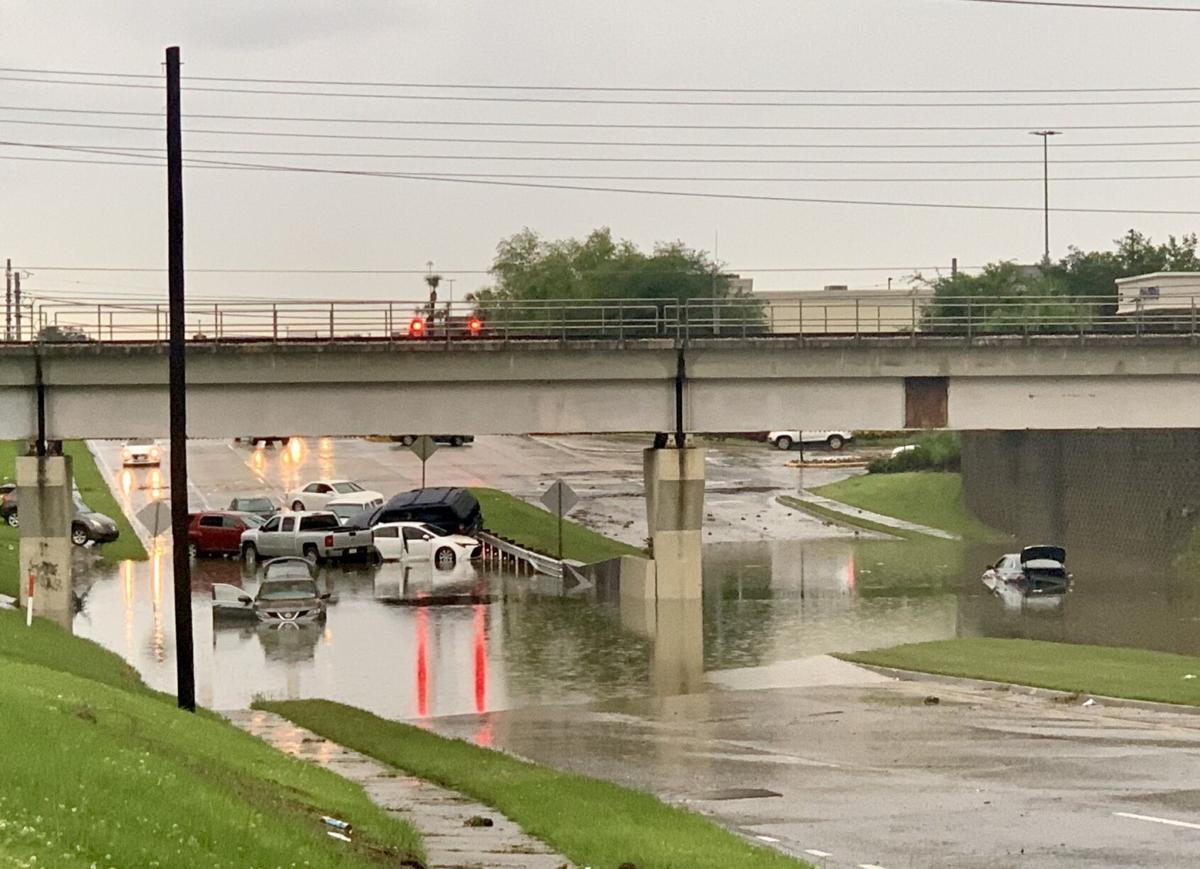 Empty cars pile up near a flooded underpass on Bluebonnet Boulevard in Baton Rouge. Some parts of the city saw 13+ inches of rain, the National Weather Service said. 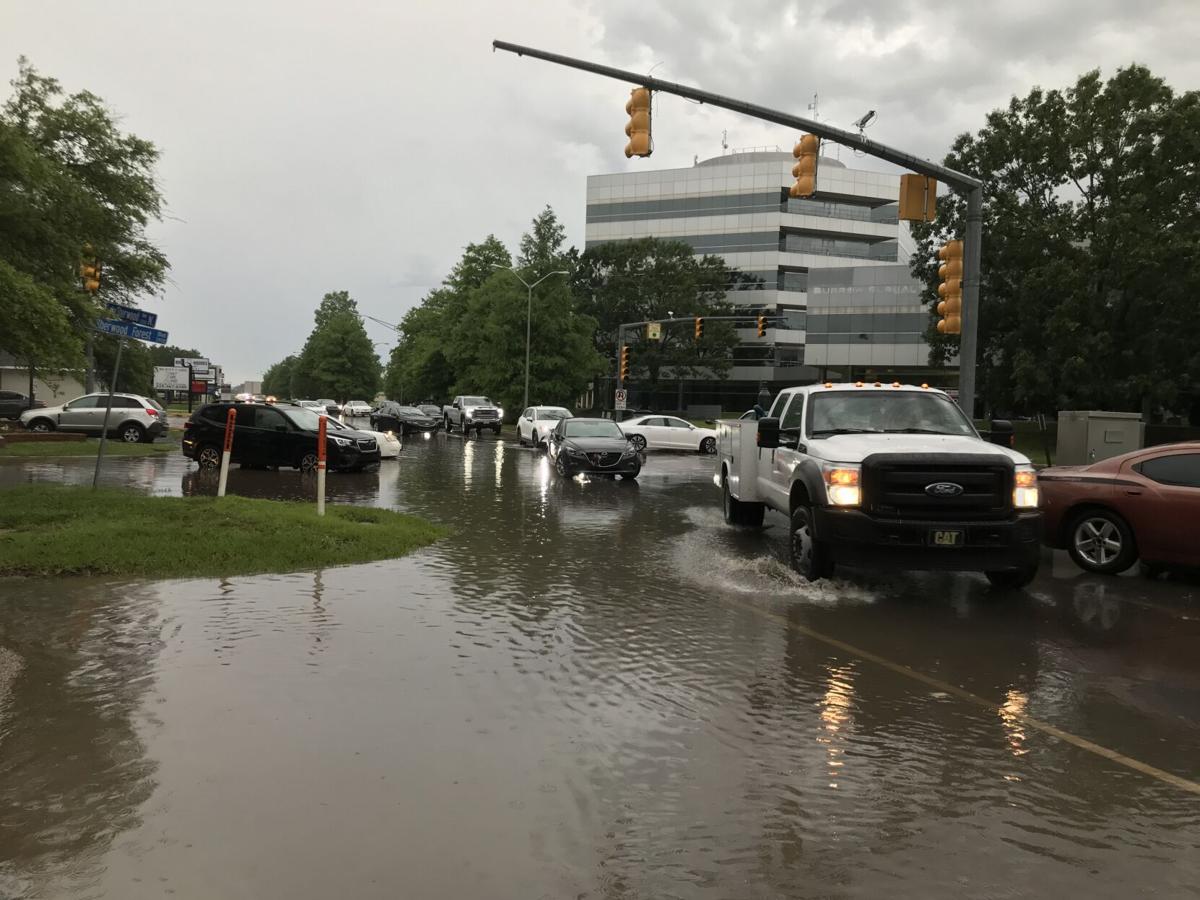 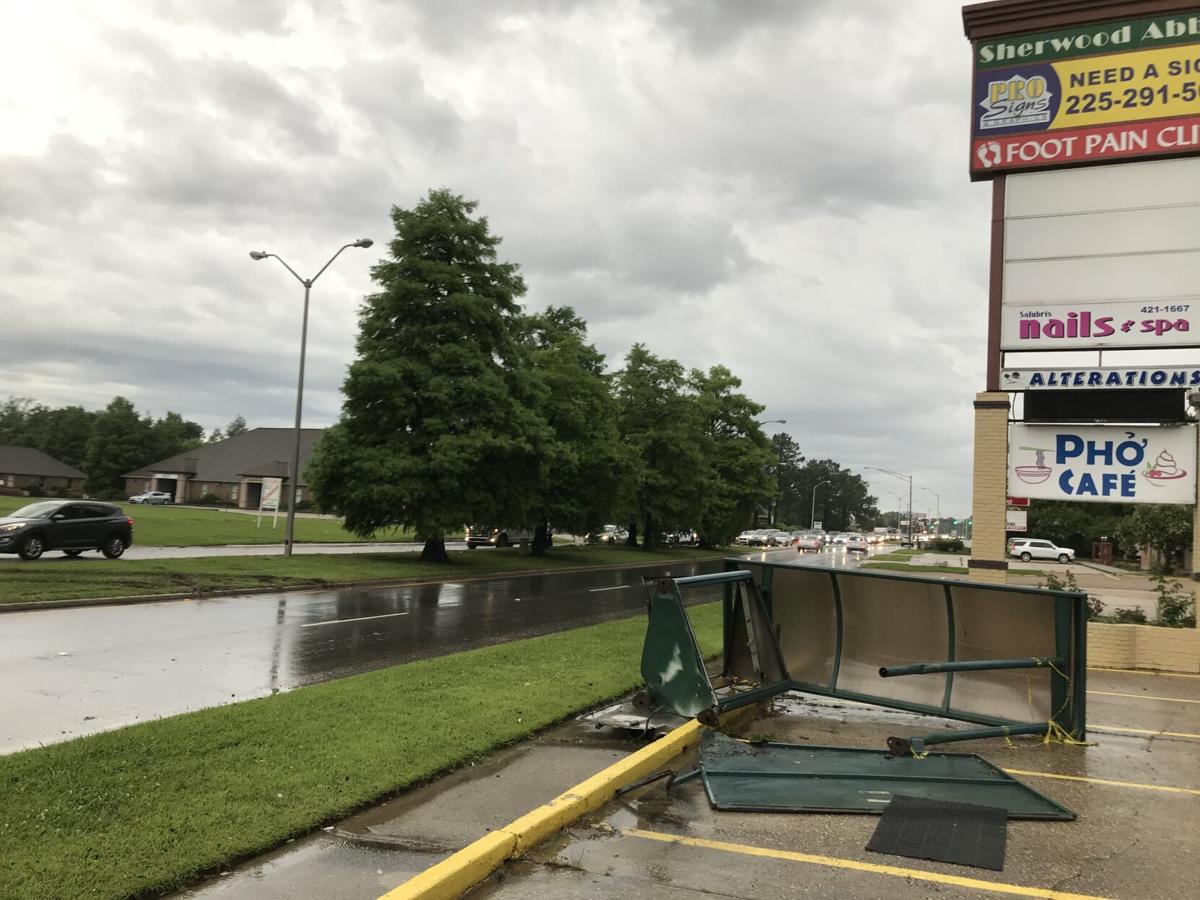 A bus stop covering was torn from its footings on South Sherwood Forest Boulevard sometime Monday or Tuesday, May 17 or 18, 2021, during the severe rain storm. Traffic was backed early Tuesday due to lingering high water and stranded cars.

Empty cars pile up near a flooded underpass on Bluebonnet Boulevard in Baton Rouge. Some parts of the city saw 13+ inches of rain, the National Weather Service said.

A bus stop covering was torn from its footings on South Sherwood Forest Boulevard sometime Monday or Tuesday, May 17 or 18, 2021, during the severe rain storm. Traffic was backed early Tuesday due to lingering high water and stranded cars.

Some parts of Southeast Baton Rouge Parish and surrounding areas saw as much as 13.7 inches of rain Monday night, the National Weather Service estimates.

Highwater rescue crews responded to more than 300 calls in East Baton Rouge Parish overnight that saw some 250 people brought to higher ground, according to the Baton Rouge Fire Department.

Fire spokesman Curt Monte said the calls were a mix of people trapped in cars and people who needed to be rescued from homes and apartments that were taking on water.

Nearly three dozen people were brought to the regional airport, which had been set up as a temporary refuge.

The East Baton Rouge Parish Sheriff Office has also been out most of the morning conducting water rescues.

“We activated our [marine response team] and brought out four of our shallow-water boats to bring flooded residents to safety,” Sheriff Sid Gautreaux said. “Some of these Seigen Lane apartment complexes have water almost reaching the second floor.”

Though the high water in many areas had receded within a few hours of the rain stopping, Monte said rescue crews were doing secondary sweeps of hard-hit areas.

”It was just the rapid onset,” he said of the rain.

The highest rainfall levels in East Baton Rouge and upper Ascension parishes, at 13 inches or so, were equivalent to a 100-year rainfall event for a 24 hour period, National Weather Service estimates show. That's a rainfall event that has a 1% chance of happening in any year.

The deluge was the result of a strong and slow-moving storm. It flooded streets throughout the region, shutting down I-10 between Siegen and Highland.

Some residents posted pictures and videos on social media of their streets and, in some cases, their homes flooding.

"We want people to stay off the roadways as are clearing stalled vehicles and other debris. We got 13 inches of debris near the (I-)10-12 split, more than any drainage system can handle. The drains are flowing, but they’re overwhelmed at the moment," he said early Tuesday.

He added the city-parish assisted 250 people, got them to higher ground and about 35 people went to the reception center.

Some places saw about 6 inches fall in just four hours, between 4:00 and 8 p.m., the NWS estimated. Those numbers have yet to be officially confirmed by rain gauges.

In Ascension Parish, USGS rain gauges picked up between 4 and 13 inches of rain.

The heaviest amount was at the Alligator Bayou gauge along Bayou Manchac with 13.04 in the past 24 hours, according to the U.S. Geological Survey. Other gauges in northern Prairieville and in Duplessis were 6 to 8 inches. Heavy but less rain was recorded in Gonzales, Sorrento and Donaldsonville.

Ascension Sheriff Bobby Webre said probably more than 40 roads were closed with standing water early Tuesday and some house flooding was reported in Southwood Village and along La. 74 near Grand Goudine Bayou.

Webre added he was checking Alligator Bayou and Manchac roads early Tuesday along Bayou Manchac for high water. The area receives rainfall runoff from southern Baton Rouge and the roads, which serve as levees, have been overtopped in past storms, sending water into the Spanish Lake and Bluff Swamp areas where homes are located along the fringes.

Webre said there was still a few feet of clearance before Manchac levels reached the road in Ascension. Drainage gates for the swamp basins were closed due to high water in the bayou.

In Livingston Parish, heavy rain was reported but no house flooding so far, sheriff's deputies said.

More rain is on the way. Forecasters say 4-6 inches could fall during the daylight hours Tuesday, which could worsen the flooding.

This is a developing story. Check back later for updates.