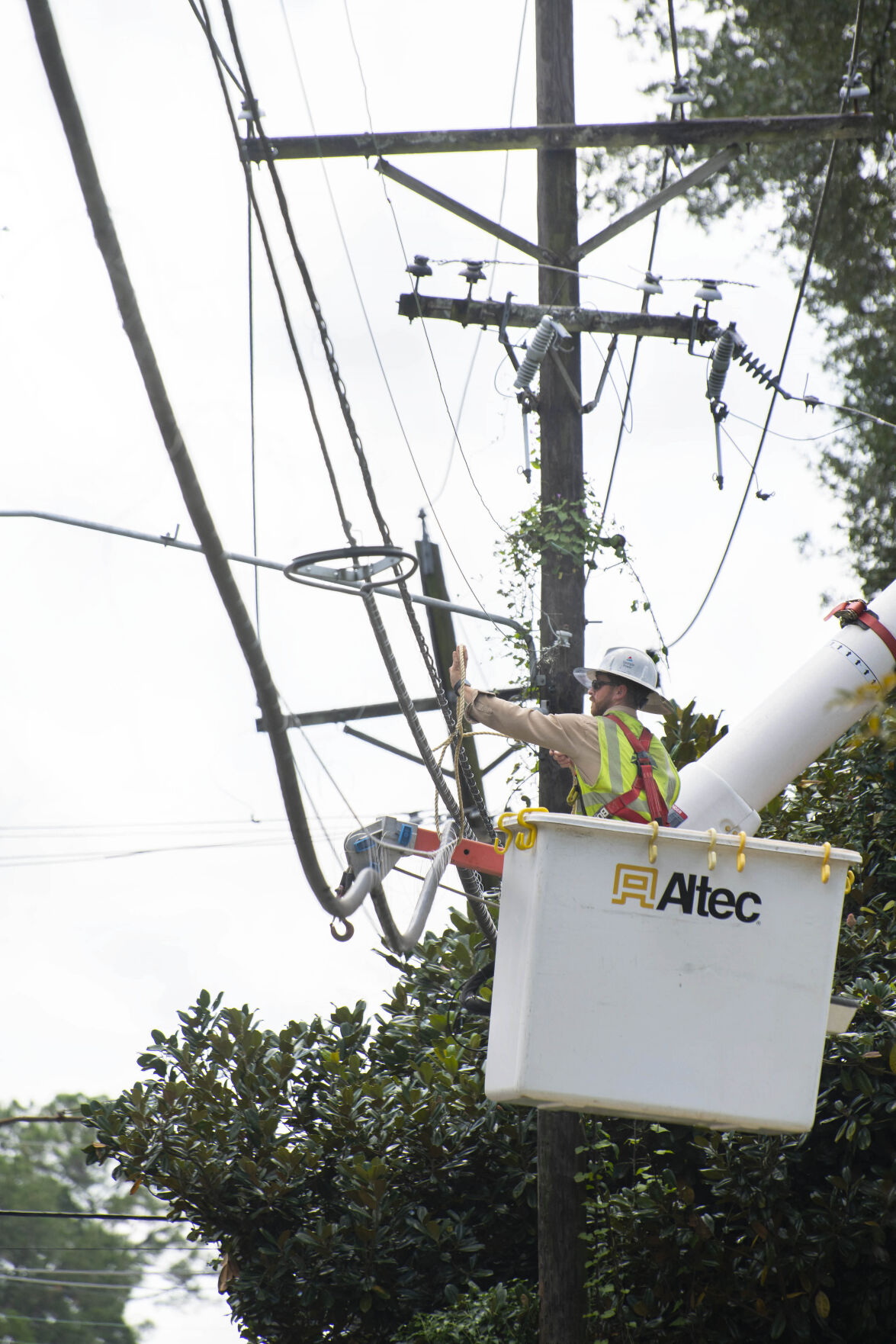 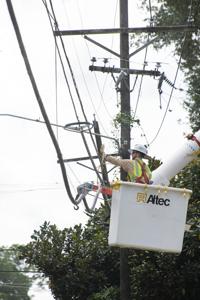 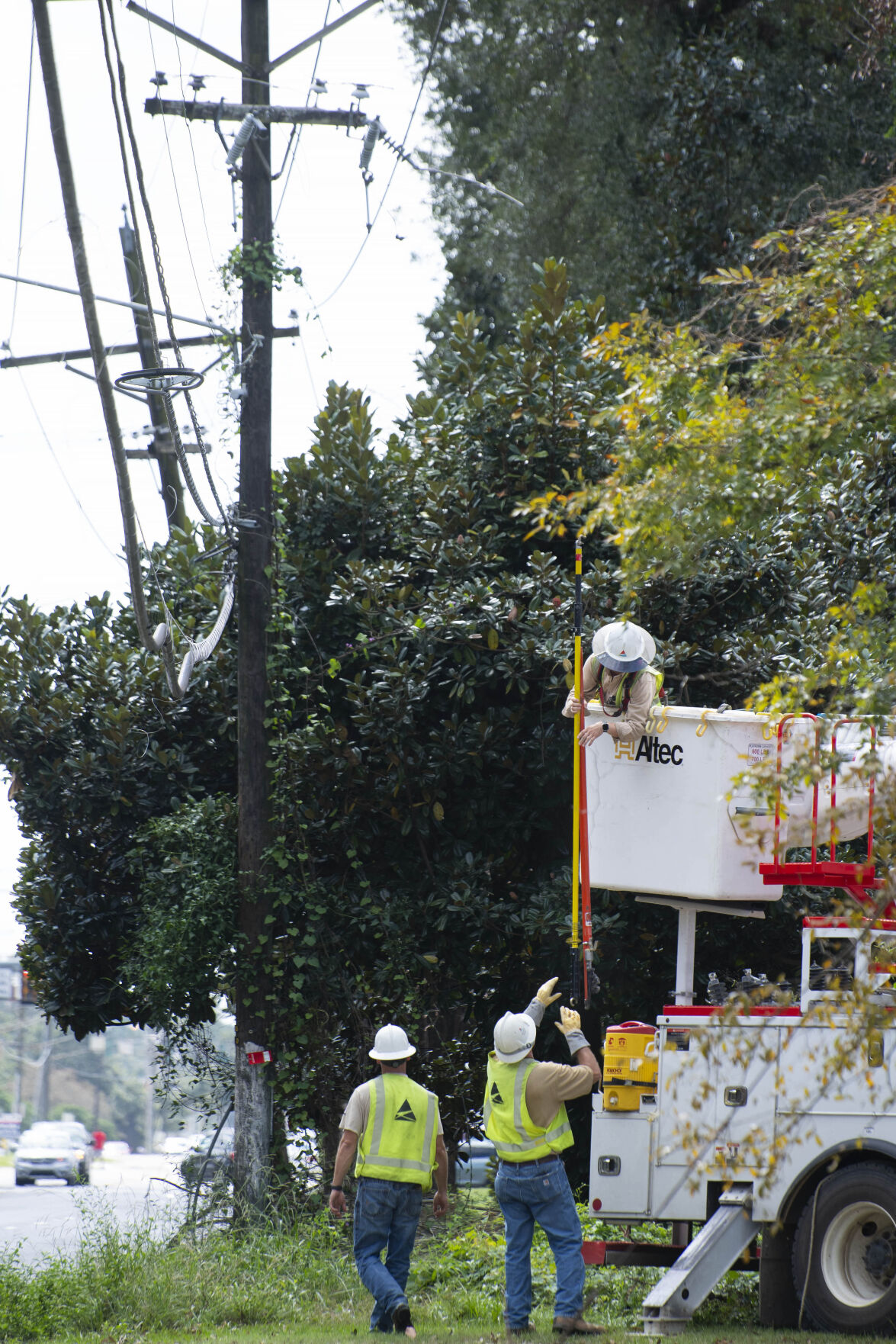 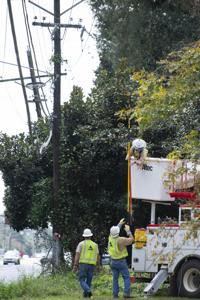 A little more than 2% of the nearly 216,000 electrical customers in East Baton Rouge Parish remained without power Monday evening, roughly three days after Hurricane Delta tore through the state.

That works out to about 4,750 customers of Entergy and Dixie Electric Membership Cooperative in the state's largest parish by population, according to company tallies.

The utilities, as well as PC Electric, another electrical cooperative in the Baton Rouge area, continued to reduce the number of outages after Delta had caused more than 680,000 outages statewide.

Delta created the largest power outage in Louisiana since Hurricane Isaac in 2012, topping out even more than the devastating Category 4 Hurricane Laura earlier this year.

By 5 p.m. Monday, around 9,050 customers remained without power in the 12-parish Baton Rouge region. Among those parishes, East Baton Rouge had the most customers without power. While many other parishes in the area had a few dozen or even single digit outages Monday evening, progress on restoring power was slower elsewhere.

In raw tallies, both parishes had the most customers without power in the area after East Baton Rouge but their numbers represented a far larger share of the lightly populated communities than did those in East Baton Rouge.

Delta was hard on the heavy tree canopies as West Feliciana Parish officials had described Saturday that so many trees were falling Friday night they impeded their ability to reach and evacuate a West Feliciana sheriff's deputy injured in a car crash.

West Feliciana President Kenny Havard said authorities had to cut their way through the downed trees to reach the injured deputy, later identified as Sgt. Bryan Herrin, and then cut their way out afterward.

Herrin had been returning from a call when a tree fell across the road in front of his vehicle. He swerved to miss that tree but struck another, sheriff's office spokesperson Erin Foster said in a news release Monday.

Arriving EMS workers spent the next two hours driving Herrin to the hospital — a trip that would usually take six minutes — due to fallen trees and high wind, Foster said.

Hurricane Delta: More than 90,000 in East Baton Rouge without power, half a million statewide

Hurricane Delta knocked out power to thousands of homes in the Baton Rouge area late Friday, a serious and somewhat unexpected blow to the loc…

Herrin was treated for a concussion and a cracked nose in addition to lacerations on his head and tongue.

Sheriff Spillman was hit on the head by a falling tree as he walked back to his vehicle from crash, Foster said. He was apparently knocked unconscious for a moment, then regained consciousness and called for assistance.

Spillman was also hospitalized and treated for a concussion and severe cuts to the top of his head. Both officers stayed overnight at the hospital but were released over the weekend, Foster said.

More than 75,000 homes had still been without power Saturday afternoon in East Baton Rouge, or about 35% of customers in the parish, according to data from the Louisiana Public Service Commission.

Entergy officials said Sunday evening that in Baton Rouge area parishes, the majority of customers who can receive power would be restored Monday, with a few customer outages extending into Tuesday.

Myron Lambert, general manager of PC Electric, said that fewer than 50 customers in Pointe Coupee Parish would be without power by Monday evening while all customers in Iberville and West Baton Rouge parishes should have power restored.

Nearly half a million Louisiana customers without power: See latest for Lafayette area

In East Baton Rouge Parish, city-parish officials also warned that anyone who hires a private contractor to cut down trees must ensure the contractor hauls away the debris.

Any tree debris cut by a private contractor and left on the side of the road will not be picked up by the city-parish.

An estimated 6,125 customers in East Baton Rouge Parish were still without power mid-morning Monday after Hurricane Delta tore through the met…