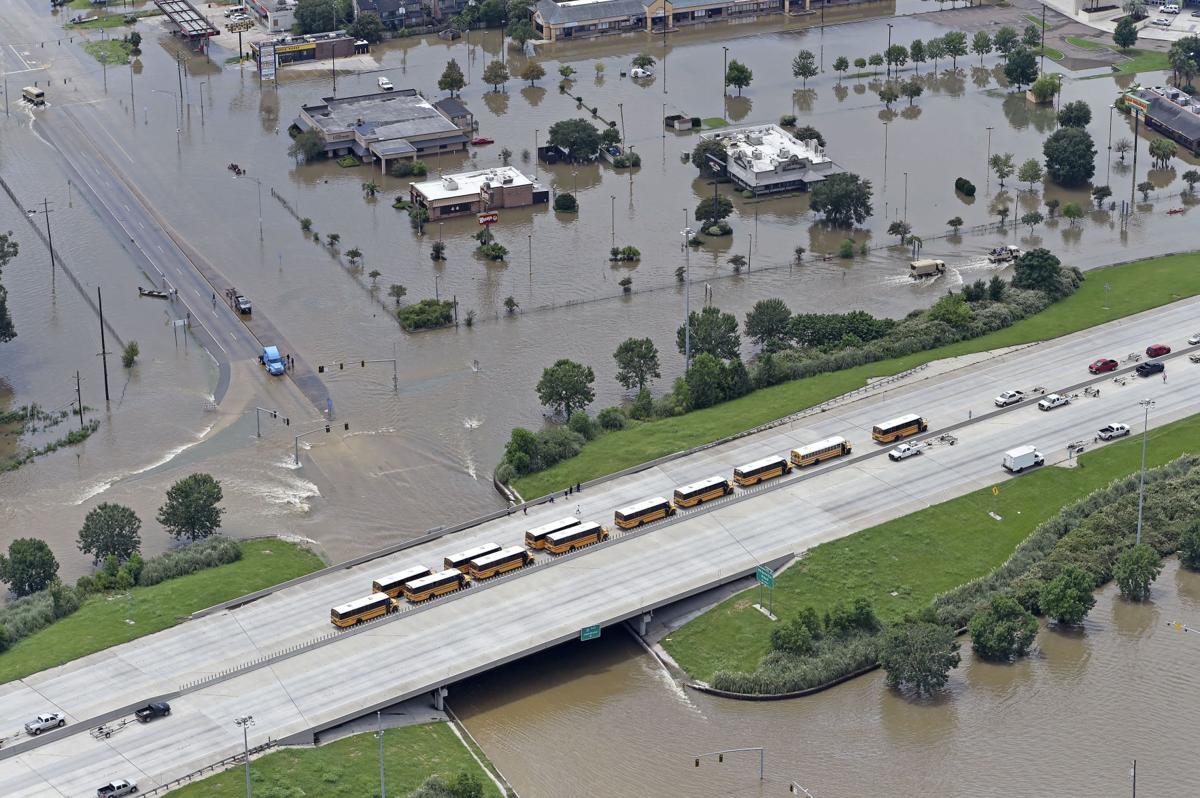 School busses wait to evacuate people as businesses take on water on O'Neal Lane looking south toward I-12 in the Baton Rouge area during severe flooding in East Baton Rouge Parish on Sunday August 14, 2016. 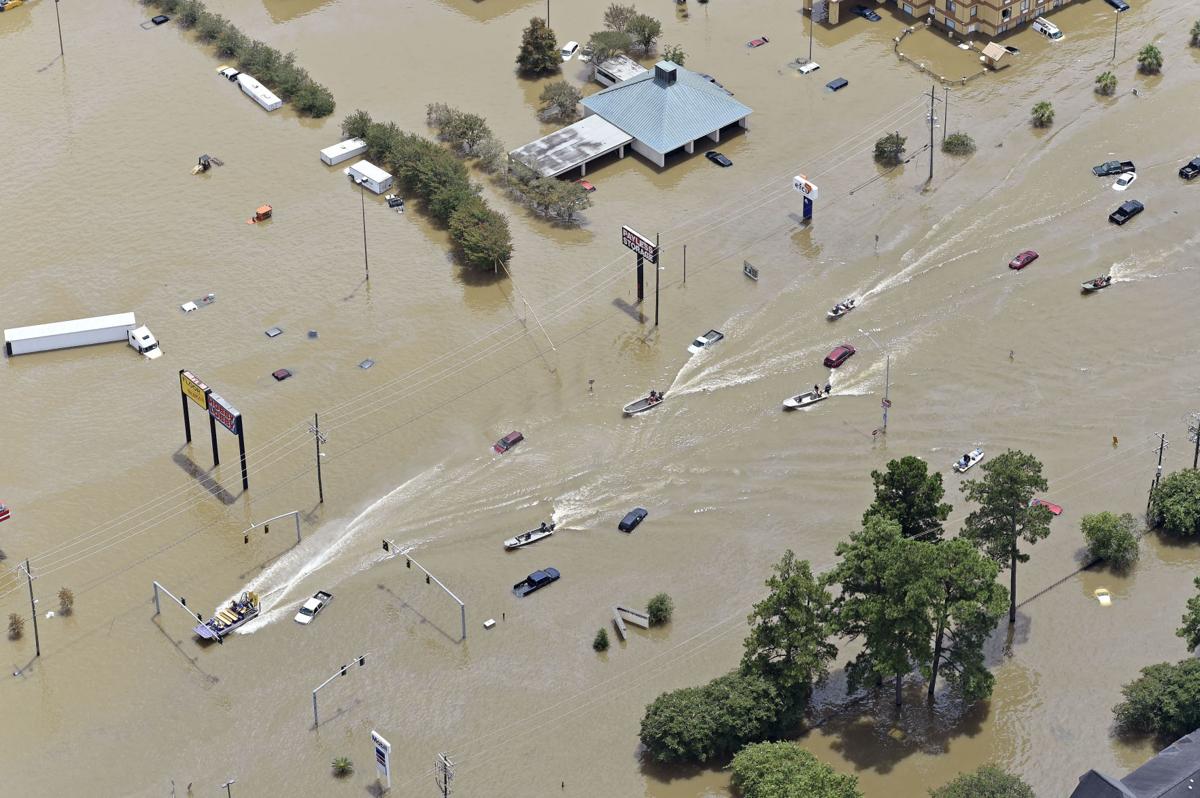 Boats make their way up a flooded O'Neal Lane just north of I-12 during severe flooding in East Baton Rouge Parish on Sunday August 14, 2016. 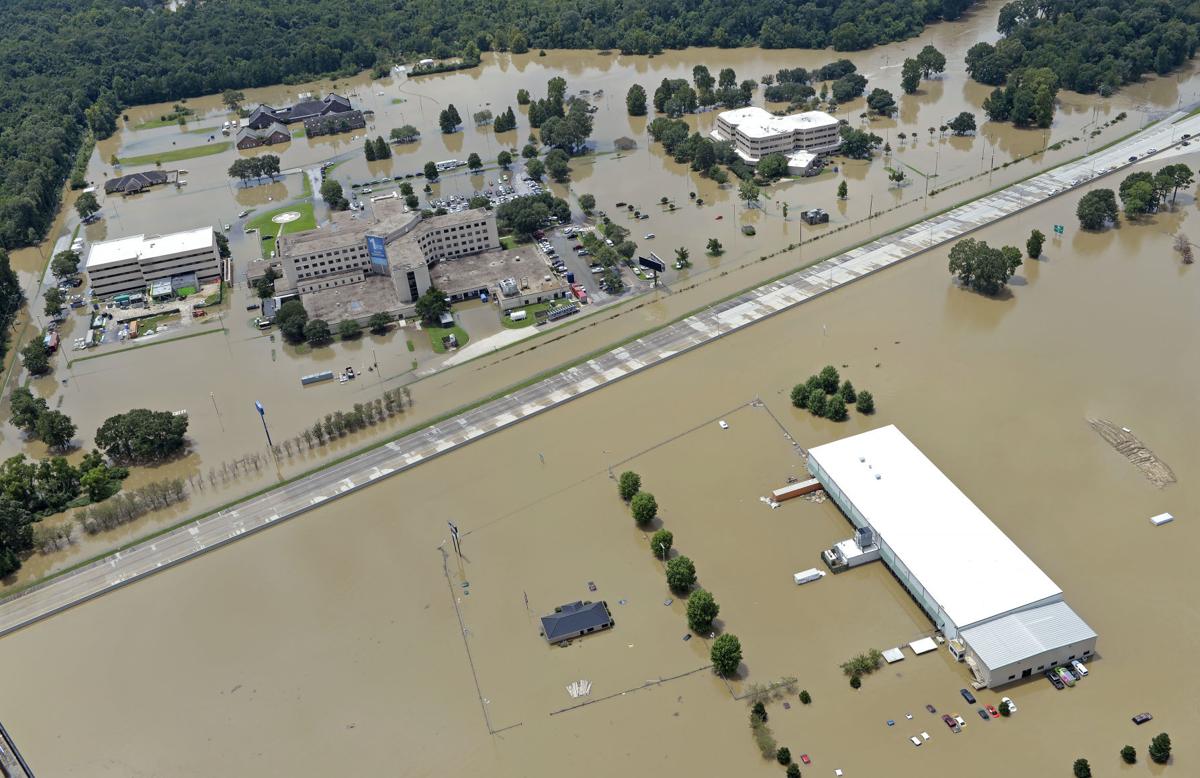 Businesses take on water and Ochsner Hospital is surrounded on O'Neal Lane looking south toward I-12 in the Baton Rouge area during severe flooding in East Baton Rouge Parish on Sunday August 14, 2016.

School busses wait to evacuate people as businesses take on water on O'Neal Lane looking south toward I-12 in the Baton Rouge area during severe flooding in East Baton Rouge Parish on Sunday August 14, 2016.

Boats make their way up a flooded O'Neal Lane just north of I-12 during severe flooding in East Baton Rouge Parish on Sunday August 14, 2016.

Businesses take on water and Ochsner Hospital is surrounded on O'Neal Lane looking south toward I-12 in the Baton Rouge area during severe flooding in East Baton Rouge Parish on Sunday August 14, 2016.

East Baton Rouge Parish remained a patchwork of dark water and dry spots across its 472 square miles on Monday, days after the capital city was hit with record flooding.

About 20,000 people have been rescued in the parish since the floods began Friday, said Baton Rouge Fire Department spokesman Curt Monte, with likely more people having left their homes on their own. Rescue efforts slowed Monday in the northern part of the parish where water slowly receded, but were in full force on the southern end with areas of new flooding, he said.

Some people decided after days of waiting it out that it was time to go.

"The loss of AC and the need for more cigarettes made me and my wife finally decide to leave," said Bill Williamson, moments after a rescue boat dropped him off on dry land on O'Neal Lane near the Deer Lake subdivision.

Williamson summoned a friend with a boat to pick him up where he lives in the Shadows Lake subdivision off South Harrells Ferry Road.

"Most people got out early Friday morning when the water started to flood in," he said. "I live on higher ground in the back and told my wife there was no way we'd get water in the house."

But three feet of floodwaters pushed into his home over the weekend. Most of his neighbors fled the community fearing their homes would be overtaken by water. They were right, he said.

Water also made it difficult to get around certain areas of the parish, particularly Airline Highway, which was cut off around Highland Road. Around noon Monday, state Department of Transportation and Development crews were trying to perform a "parting of the pond" by pushing floodwaters off Airline, said agency spokesman Rodney Mallett.

Workers were trying to fill inflatable Aqua Dam that would keep water off the road.

DOTD said the goal was to have the dam in place along a quarter-mile stretch by Tuesday so State Police could re-open the roadway.

Another challenge for both city workers and residents on Sunday had been spotty communications. The lack of phone service -- particularly when AT&T cell service was down for much of Sunday -- created two major problems, one with officials trying to coordinate with first responders and another with people being trapped in their homes and unable to call for help, said city-parish Chief Administrative Officer William Daniel.

"It has been very frustrating trying to call people, set things up, get resources to places when you can't get anybody on the telephone," Daniel said. "I don't want to oversell it, but it was very much a disaster in its own right."

An AT&T spokesman said in a statement Monday that wireless service was restored to "the vast majority" of customers and that the company is working "around the clock" and deploying additional equipment to make repairs and help emergency responders.

Glimpses from a helicopter Monday showed Zachary had mostly dried up, with Baker still submerged in parts. North Baton Rouge was underwater in the Plank and Hollywood Road areas, and only the rooftops were visible on houses off of Joor and Greenwell Springs Roads. Further south, Florida Boulevard was flooded at Flannery Road and the Monticello, Millerville Road and O'Neal Lane areas were lake-like.

For some in Central, Monday marked the first day of ripping out floorboards and other aspects of dumping and rebuilding.

That city, which had been inaccessible for days because of flooded roads, dried out dramatically. Water lines could be seen on homes and businesses illustrating the depths of the flood damage -- some higher than five feet.

The East Baton Rouge Parish Sheriff's office used a helicopter to deliver medicine in Central to Sgt. Bruce Simmons, who was one of six law enforcement officers injured in a shooting last month.

Liz Wright, a veterinarian at Central Animal Hospital on Hooper Road, was trying to salvage records on Monday at the office, which had taken four feet of water. Furniture had been violently thrown around the lobby and soggy piles of animal food covered the ground.

Like hundreds of others, Wright said people working at the clinic never dreamed of such flooding. In fact, they'd boarded animals belonging to people evacuating because of the flood.

"As a silly precaution, we put all the animals in the highest cages," she said. "But we never imagined we'd flood."

But on Saturday morning, when water began rushing in, Wright and a few others orchestrated a dramatic rescue of five animals left at the hospital.

They waded through chest-deep water down Hooper Road and broke a window to get inside the clinic. Four dogs and a cat, which were still alive, were loaded into kennels and onto a kayak about half a mile away against the strong current and rapidly rising water.

Eventually the kayak got too heavy, so the team abandoned some of the crates and held some of the dogs in their arms through the water. All were safely delivered to Sherwood Forest Animal Hospital

"I just know if it were my pet, I'd want someone to make the effort," Wright said.

On a Sunday there was apparently a temporary disagreement between Mayor-President Kip Holden and Gov. John Bel Edwards about whether to open the Baton Rouge River Center as a shelter. Edwards said Sunday that Holden was initially concerned about opening the River Center. They discussed the need to shelter people closer to home, the governor said, noting that the mayor agreed.

Daniel, the city-parish official, said leaders initially did not realize on Sunday how many people would be needing shelter, and that they thought Celtic Media Centre could accommodate everyone.

"The River Center is an important asset to the city-parish and right in the middle of our business district," Daniel said. "We were just hesitant to expose everybody coming downtown to that, but ultimately, the mayor realized it made sense to do it."

Daniel said the city-parish already has a contract in place for emergency debris pickup, but that rescuing people is the highest to-do item on the priority list right now.

"Words don't even describe how people have stepped up to help people that they don't know," Daniel said. "They have put their money and their energy into helping people, they have helped provide for their pets, their children. I can't even put into words how wonderful the people of this parish are."

Close to 5,000 people staying in BR shelters, many with pets, as volunteers try to lift spirits

LSU coach Les Miles on historic flooding in Baton Rouge area: 'It's been everything but normal'

LSU tight ends coach Steve Ensminger and his family evacuated their home over the weekend as it experienced flooding, and at least two LSU foo…

Sammy Parrino was alone for about an hour in his house as the flood waters pooled around his feet.