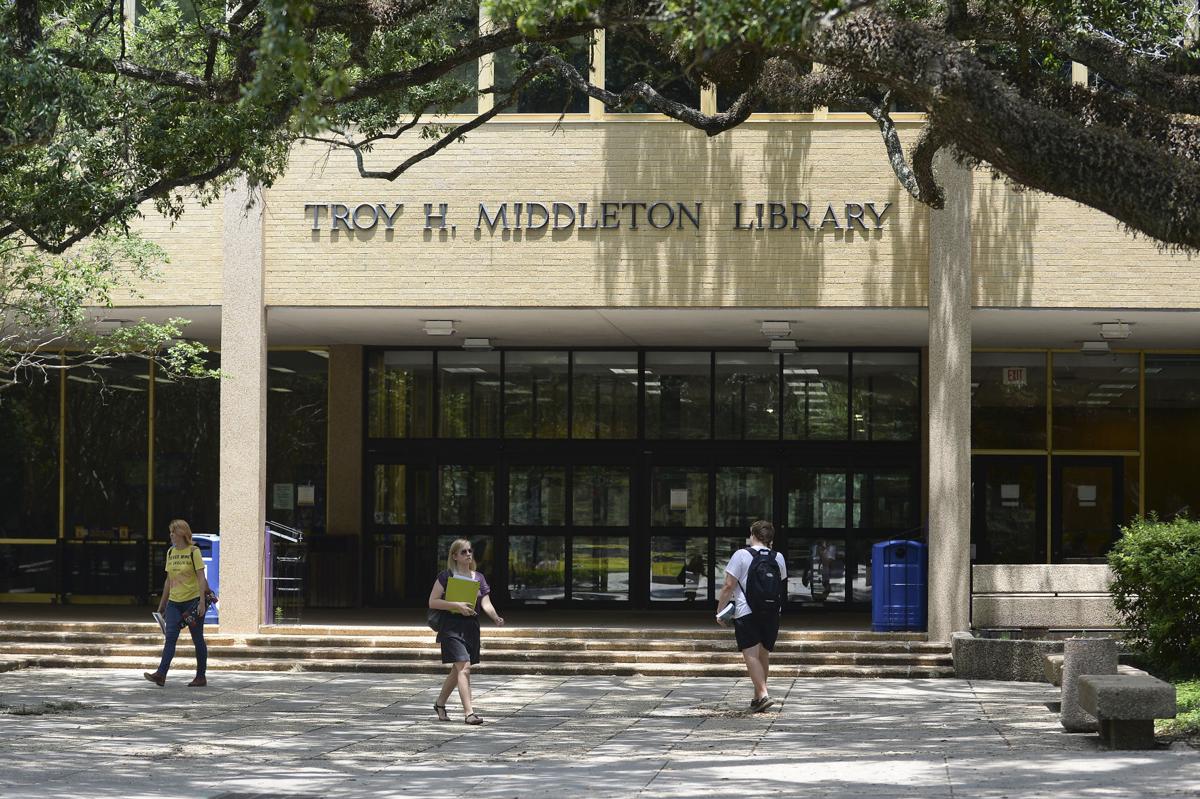 Students walk through the quad in front of Middleton Library on LSU's campus in 2014. 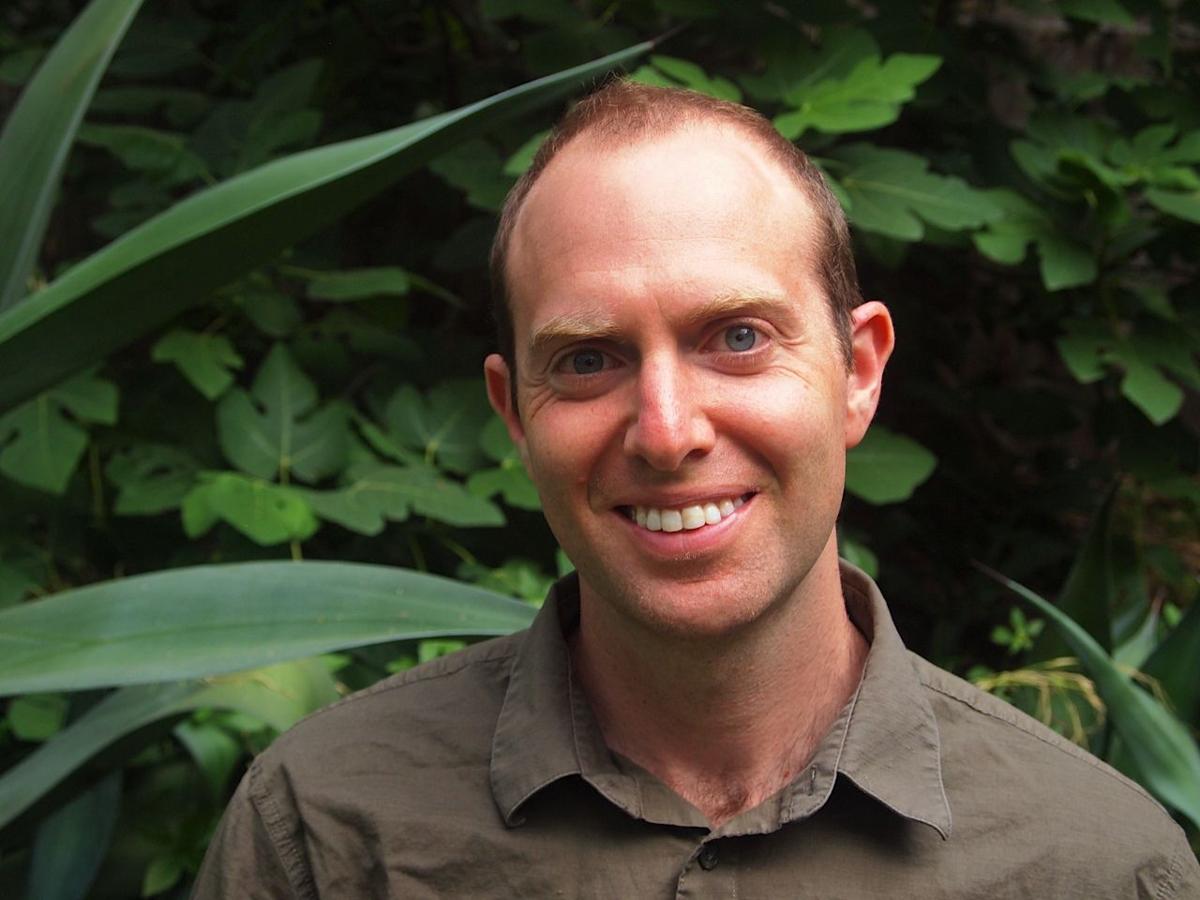 Students walk through the quad in front of Middleton Library on LSU's campus in 2014.

When the LSU Tigers take the field this August, many members of the football team will be African-American. But once upon a time, the university president for whom the central library is named was determined not to allow black athletes to represent the university.

In the popular history of LSU, Troy Middleton, the university’s president in the late 1950s and early 1960s and the namesake of the university’s largest library, was a war hero who dutifully enforced desegregation after the U.S. Supreme Court’s Brown v. Board decision.

“While Middleton, like most white Louisianans, was in favor of segregation, as the university president his responsibility was to uphold the laws of the state and nation, and his intention was to do just that,” explains a Wikipedia page that glosses over the tortured annals of desegregation.

Actually, a document I recently uncovered as part of a book I’m writing about football great Earl Campbell reveals Middleton to have been an out-and-out racist, one baldly committed to maintaining a segregated system at his university as long as he was in power. Campbell, a running back who grew up in segregated East Texas, went to the University of Texas shortly after African-Americans were allowed on the squad and as a pro finished his career with the New Orleans Saints in the mid-1980s.

In October 1961, as the University of Texas found itself facing lawsuits — as well as student and faculty pressure to integrate its dormitories — the university’s chancellor wrote administrators at a number of other universities across the South to ask them how they had handled issues of desegregation.

Middleton, then president of LSU, was among those to write back.

“Though we did not like it, we accepted Negroes as students," Middleton wrote UT chancellor Harry Ransom on Oct. 27 of that year.

"At no time,” the letter continues, “has a Negro occupied a room with a white student. We keep them in a given area and do not permit indiscriminate occupancy."

The letter goes on: "Our Negro students have made no attempt to attend social functions, participate in athletic contests, go in the swimming pool, etc. If they did, we would, for example, discontinue the operation of the swimming pool."

Middleton’s letter concludes this way: “Since we have not had a Negro request that he be permitted to participate in athletics, we, of course, have not had to make a decision. If one should apply between now and February 1, 1962, (date for my retirement), I think I could find a good excuse why he would not participate. To be specific — L.S.U. does not favor whites and Negroes participating together on athletic teams.”

The letter is, of course, stomach-turning and deeply disturbing, both rhetorically and practically speaking. It also reveals the machinery of segregation on university campuses in this post-Brown period. Like so many football programs in the South, LSU’s didn’t play an African-American on the varsity squad till the early 1970s. 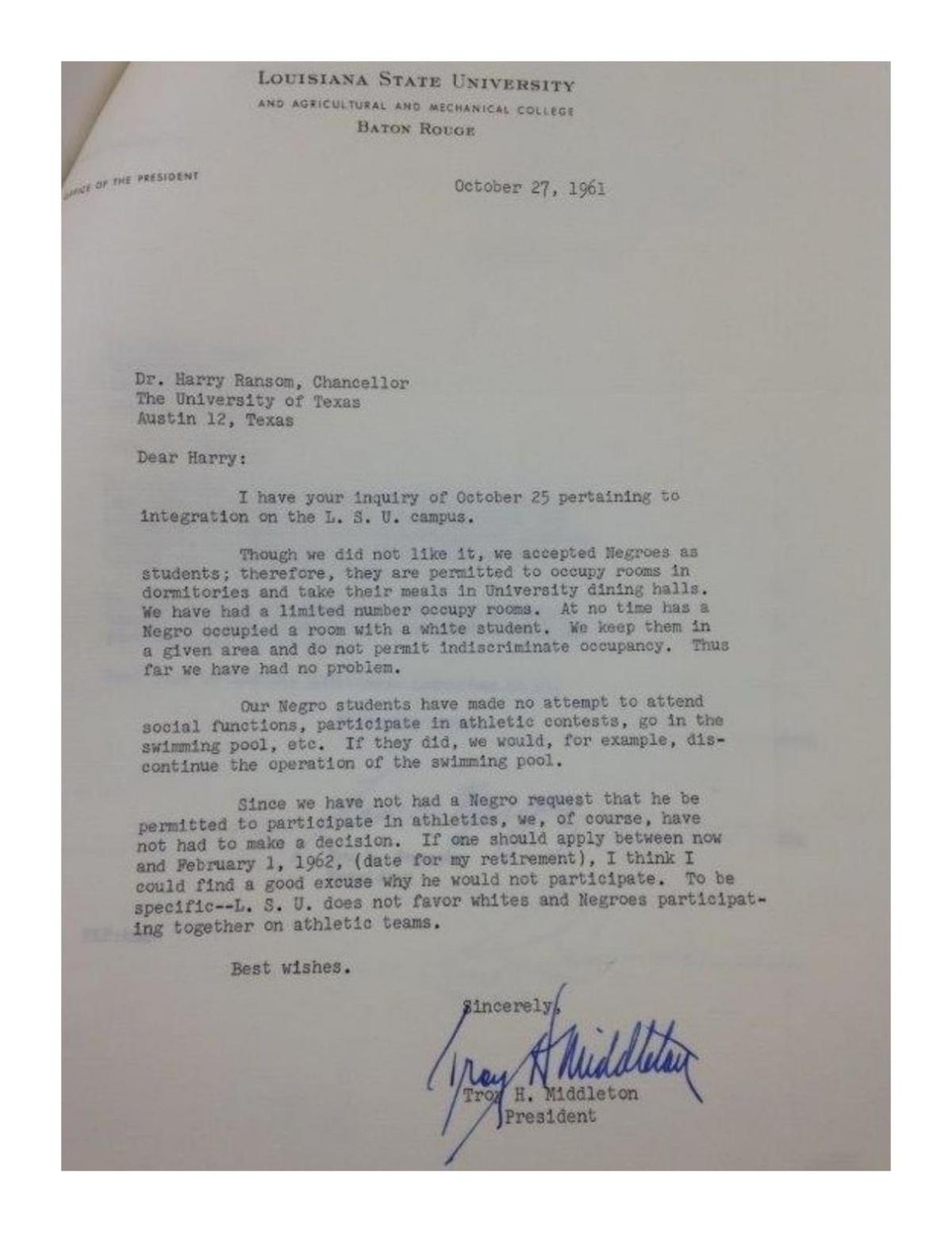 Even as some university administrators managed to avoid the sort of standing-in-the-schoolhouse-door moments that caught the attention of Americans across the country, the Middleton letter speaks to the behind-the-scenes mindset of those in power. As a Texas journalist who stumbled across this document, I can’t speak to the long history of integration at LSU. But the letter illuminates the intransigence of the university’s most powerful administrator, a man widely venerated on campus and off it, on the issue of race.

Two years after his retirement, Middleton was appointed by Louisiana’s governor, John McKeithen, as chair of the Commission on Human Relations, Rights, and Responsibilities, a biracial panel aimed at keeping the peace following the passage of the 1964 Civil Rights Act. By 1966, the National Conference of Christians and Jews selected Middleton for its annual brotherhood award. That year, the Louisiana Association of Broadcasters awarded Middleton a bronze plaque, honoring him as the Louisianan of the Year for his accomplishments in racial peace-keeping.

Had Middleton at all really changed his personal views? Impossible to say. But what we glean from this private letter to the UT chancellor are his feelings during a crucial period of desegregation, a period in which he held power as the university’s president — one in which he was clearly committed, in the starkest terms, to denying African-Americans the ability to swim in the pool with their white counterparts or play football — in short, to denying African-Americans opportunity.

For those who attend any university, student government groups can be a great way for young people to get a basic introduction to the realitie…

I recently posted a picture of this letter on social media — and bringing it to the light of day clearly hit a nerve.

This fall, the LSU football team is scheduled to play against the University of Texas Longhorns, Earl Campbell’s old team. Even as both these universities grapple with their past — UT in recent years has removed a number of statues of Confederate figures from campus — the teams on the field, diverse as they are, will represent a defiant break with the sort of racist policy that Middleton espoused and enforced.

Asher Price is a reporter with the Austin American-Statesman and the author of the forthcoming "Earl Campbell: Yards After Contact." He is also a fellow at the University of Texas Energy Institute.

I was dismayed to read the recent commentary by Asher Price, a Texas journalist, in which he condescended to deliver his opinion, based upon a…