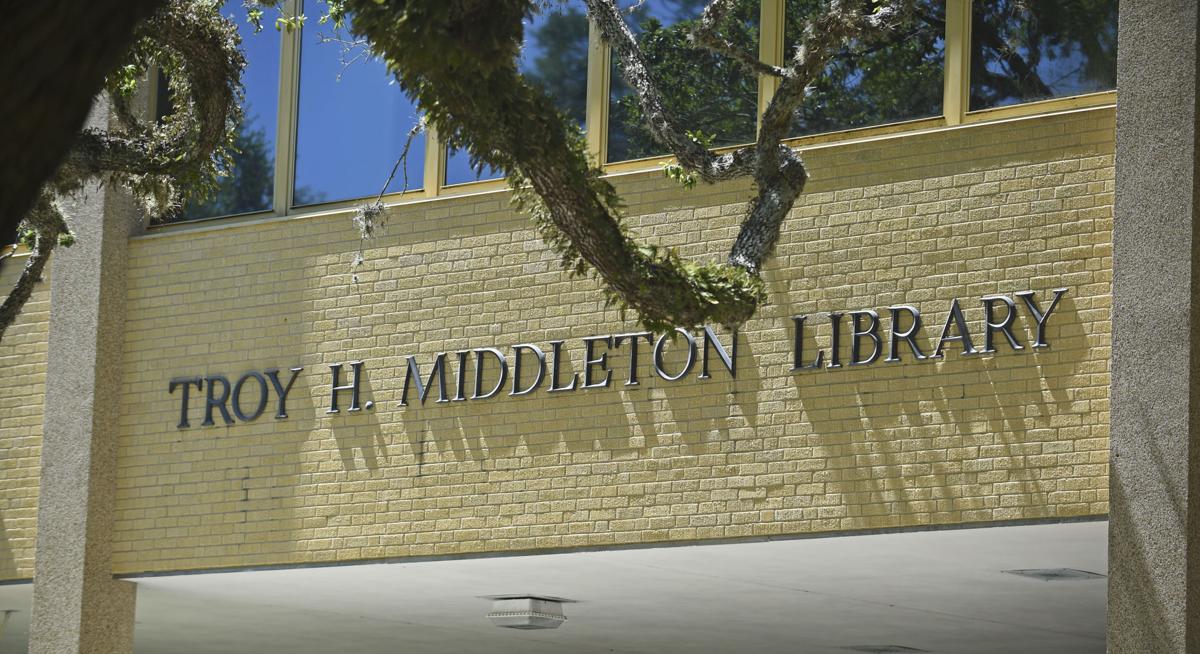 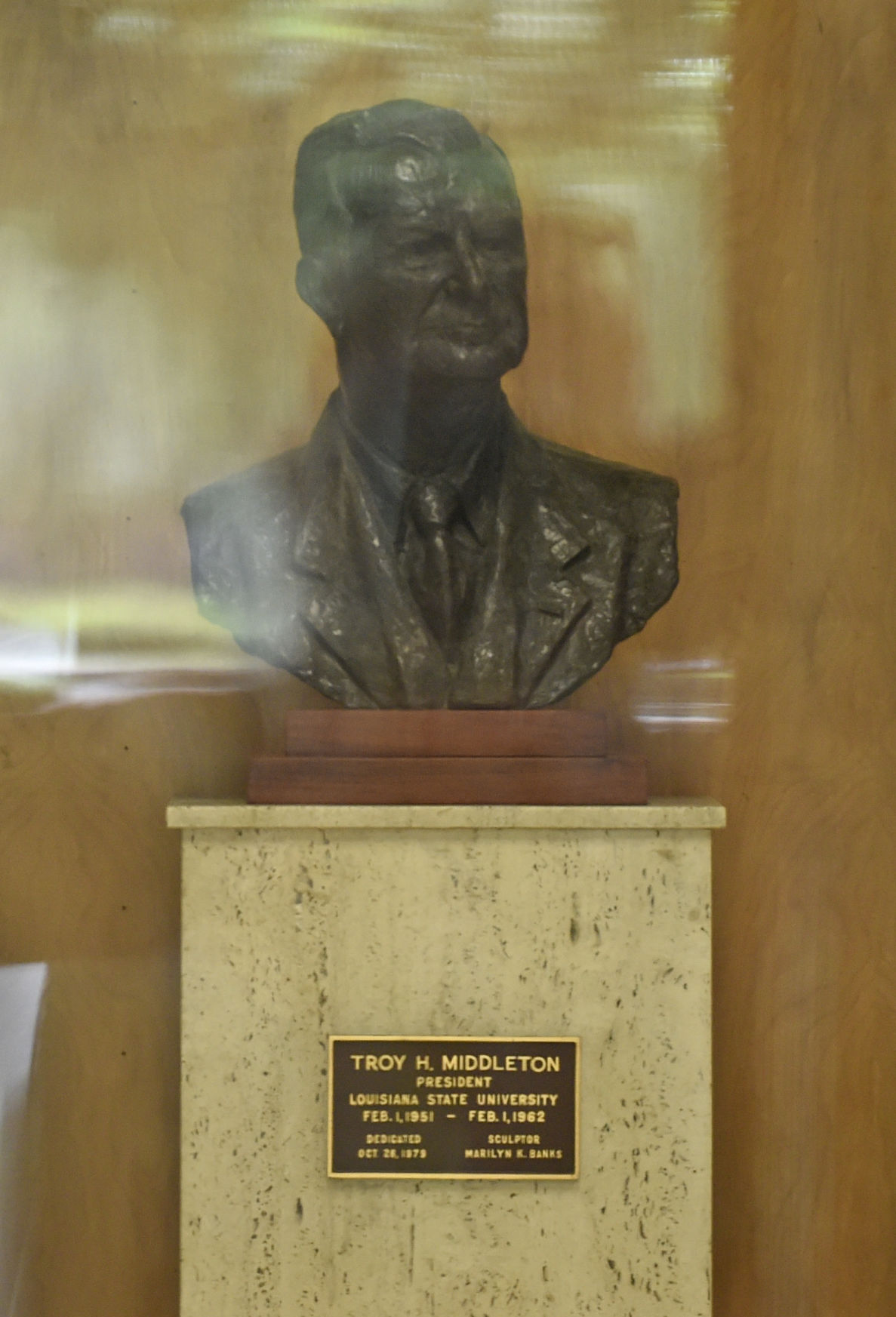 A bust of former LSU president Troy H. Middleton sits on display in the lobby of the library named after him, located in the quad, photographed Thursday, June 11, 2020, on campus in Baton Rouge, La.

A bust of former LSU president Troy H. Middleton sits on display in the lobby of the library named after him, located in the quad, photographed Thursday, June 11, 2020, on campus in Baton Rouge, La.

If academics are famous for anything, it is talking. There are committees upon committees, reports and papers; talking is the product, abstraction an outcome.

Except in political panics, in which academics can be as weak and intellectually dishonest as ordinary folk.

Exhibit A: The soon-to-be-erased name of Troy H. Middleton from the front of the library he desperately fought to get funded from the 1950s segregationist know-nothing Legislatures he had to deal with as president of LSU, 1951-1962.

Middleton’s name has been besmirched because he wrote a mean-spirited 1961 letter to a University of Texas colleague, about maintaining segregation on campus — the law of Louisiana at the time, and his directions from the LSU Board of Supervisors, his political masters.

When the LSU Tigers take the field this August, many members of the football team will be African-American. But once upon a time, the universi…

While it cannot be proven, there is at least some lore on campus that Middleton was unsympathetic with segregation. In the State-Times of Baton Rouge, as the nation was debating the Brown v. Board of Education ruling desegregating public schools, Middleton was quoted as telling his board that he would not tell students to flout the law: “When we depart from the law, we are headed for anarchy.”

That may be the authentic voice of a conservative white Southerner and moreover of the old Regular Army, the long-segregated institution in which he served. Middleton had immense prestige in Louisiana as a hero in both the world wars, fought against German imperialism and Nazi racism.

In retrospect, if he really did not believe in segregation, he could have been a strong, or stronger, voice against it.

And the key words, in retrospect.

Today’s frantic rush to judgment to purge Middleton’s name from the library — what are they going to do, throw out a million volumes stamped “Middleton Library”? — is the opposite of how responsible academic leaders should approach the difficult problems of retrospective moral judgment.

Other than the 1961 letter, unearthed by a researcher in Austin, has there been any real research into Middleton’s record? The record has not been explored at all. Interim LSU President Tom Galligan has been no Atticus Finch in this story; he’s made decisions without intellectual due process. The latter is something a former law school dean ought to hold dear.

Descendants of Troy H. Middleton — the man for whom LSU's main library is named — want to meet with school officials before they officially dr…

Key questions are unanswered because the political leadership of LSU is desperate to show themselves in touch with the moment after the horrendous killing of George Floyd in Minneapolis. Galligan would not have attacked Middleton’s legacy without explicit approval from the board, which has held zero public meetings on the issue. A former officer in the Army, Gov. John Bel Edwards, happily piles on without qualm. Was he consulted privately by his appointees to the LSU board? Don’t bet against it.

Politics in the dark, sacrificing the reputation of a dead general and public servant for urgent political cover for Galligan and the board.

Retrospective moral judgments are difficult. What did Middleton know? What should he have known? The answers to some of those questions are not in favor of the general. When most black soldiers were relegated to service companies, Middleton certainly did not object if those troops took up rifles against the Germans during the Battle of the Bulge. Surely, he knew better than to enforce segregation in the battle line in 1944.

Perhaps, and there may be no way to know, Middleton made a political judgment to keep quiet so that he could get the board and lawmakers behind the library project that the growing university desperately needed. His public statements tended to toe the dishonest party line of “separate but equal.”

There is good reason to argue, if LSU and Galligan were intellectually honest enough to probe the record and the issues, that Middleton was more wrong than right on segregation. But today's episode is completely a political panic and not a reasoned judgment.

Even if there is a case against Middleton, does that erase the war record of the man? It ought not, but the military is not held in high esteem in many elite circles, including academia. Pacifism would have been madness for this country in 1918, or the 1940s.

For different reasons, heroism in war will not prevent the tumbling of statues of Confederate generals. But surely a searching level of honest inquiry is needed when Galligan seeks to make a nonperson out of a distinguished servant of this country in the United States Army.

I value student leaders like Devin Woodson, co-chair of the LSU Black Male Leadership Initiative, on the 57th anniversary of the assassination…