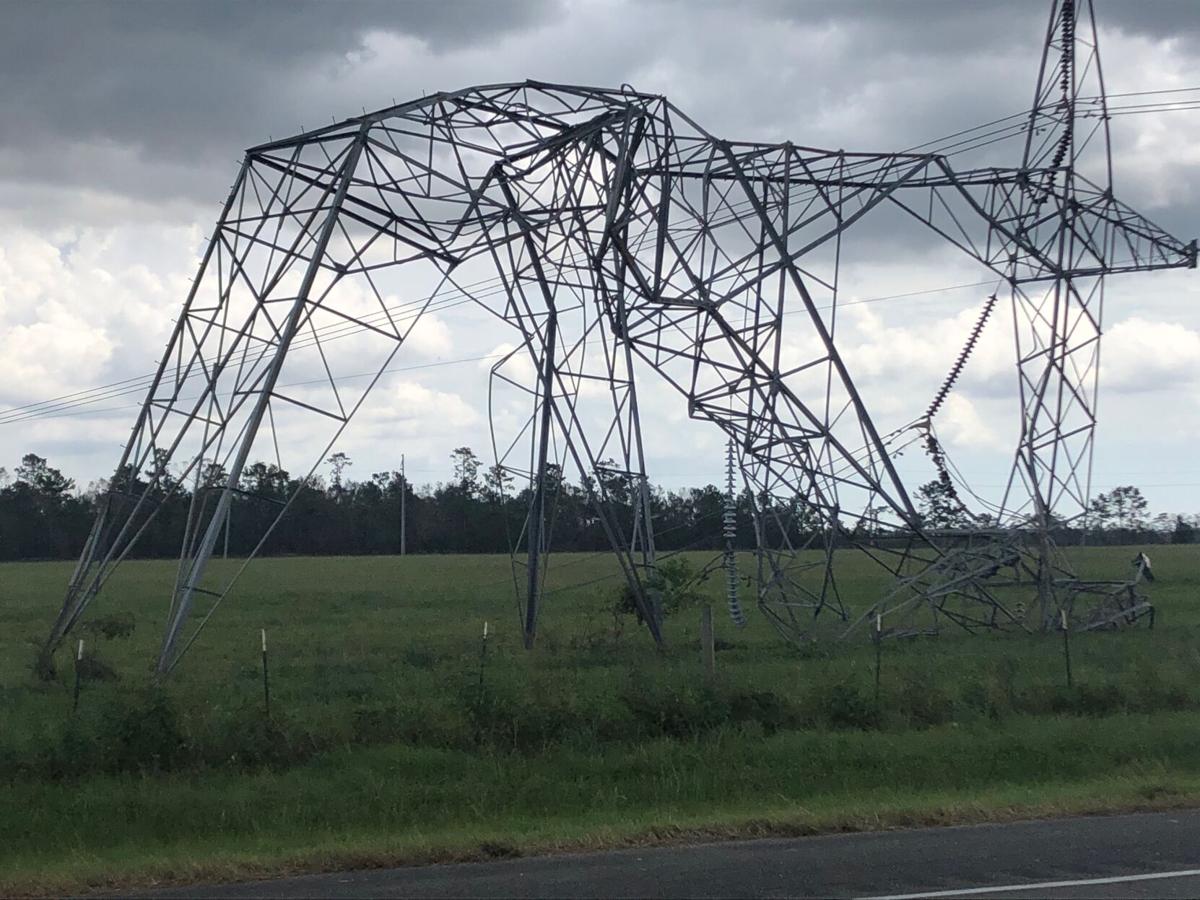 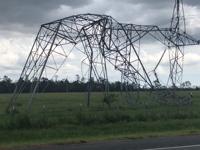 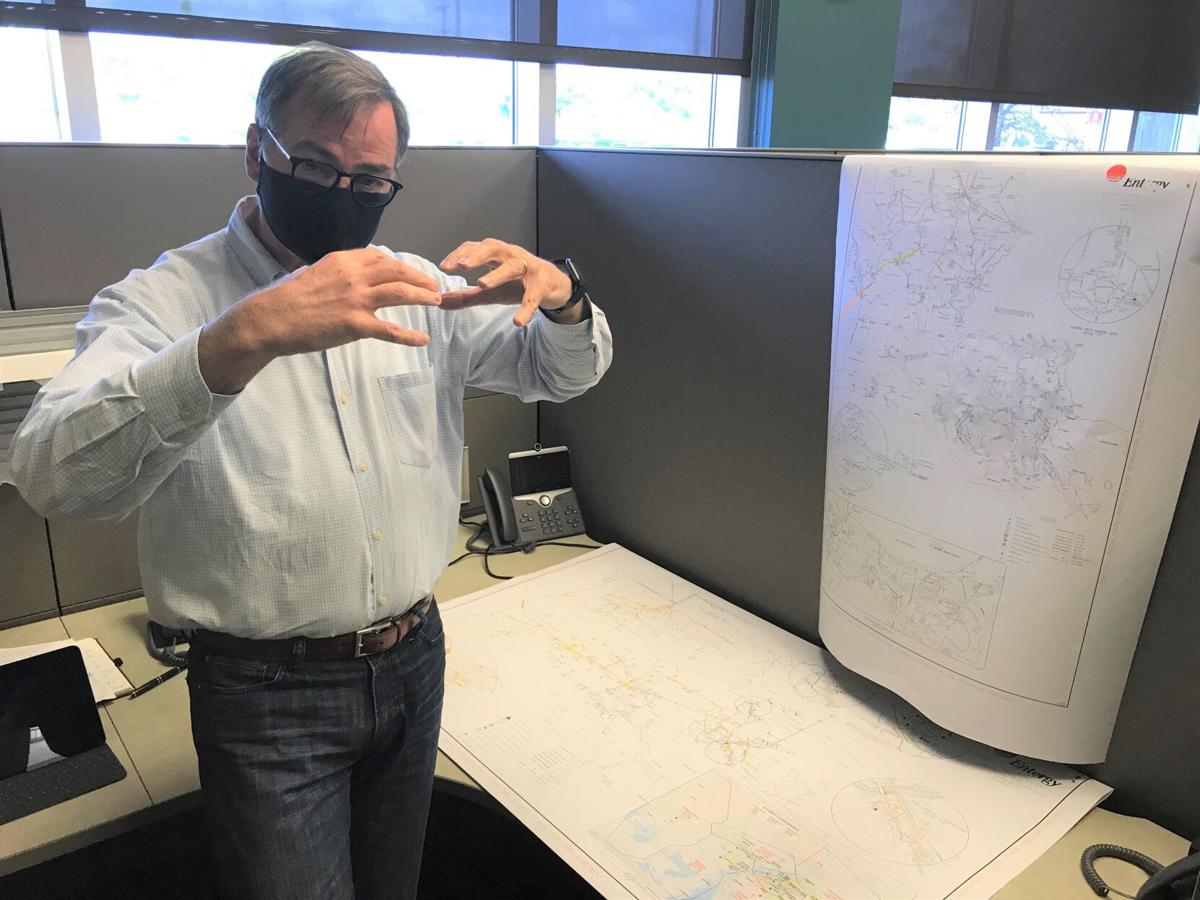 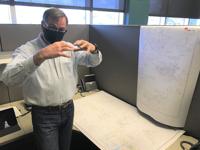 Phillip R. May, president and chief executive officer of Entergy Louisiana, at the utility's emergency operations center in Baton Rouge on Thursday, Sept. 3, 2020.

Phillip R. May, president and chief executive officer of Entergy Louisiana, at the utility's emergency operations center in Baton Rouge on Thursday, Sept. 3, 2020.

A week after Hurricane Laura came ashore near Cameron with 150 mile-per-hour winds, the head of Entergy Louisiana, Phillip May, has found himself in the eye of a storm of sweaty, often homeless, southwest Louisiana residents wondering just when they’ll be able to turn on their lights again.

Two-to-three weeks for much of Lake Charles is May’s short answer. No estimates for how long it’ll take to get the whole system back to normal.

“It’s not a restoration, it’s literally a rebuild of our system,” May said.

Unlike most storms, Laura basically wiped out the electrical grid for the area. Entergy counted about 1,000 destroyed transmission structures; 6,637 broken poles; 2,926 damaged transformers; and 338 miles of downed distribution wire.

Entergy is the largest but isn’t the only damaged utility operating in southwest Louisiana.

These Louisiana parishes have been granted Hurricane Laura aid; another 14 are told to 'be patient'

With nearly 600,000 Louisiana residents without access to clean water, and hundreds of thousands still without power, the federal government g…

Laura wasn’t nearly as forceful in those places as near Lake Charles, where its eye passed over an Entergy generating plant as a Category 3 hurricane. An Oklahoma expert accompanying Gov. John Bel Edwards on a helicopter tour of the region said the damage looked similar to a tornado, only dozens of miles wide and a 100-miles long.

“I am an engineer, not only in training but in personality too,” May said Thursday, poring over maps in a gray-walled office cubicle he coopted at Entergy’s operations center from which he issues orders and receives reports.

The most animated this buttoned-down executive got was when describing the meetings with engineers spitballing ideas about getting around obstacles. “The innovation; the creativity; the emails at 2 in the morning: ‘What if we try this?’”

With transmission down and the generating plants no longer making electricity, the engineers cobbled together a way to bring in enough power from Texas — the shortest distance — to restart one of the Lake Charles generating plants and slowly send the electricity out to the residences and businesses as they can safely accept it.

Very generally, electricity is made at generating plants. Electricity can’t be warehoused for later use, so is uploaded into high capacity transmission lines, then sent hither and yon to wherever power is needed.

May likens transmission lines to an interstate highway, carrying lots of traffic at high speeds from the generating plants. The interchanges in this analogy are the substations, off which some of the vehicles (power in this case) exit the freeway and slow down to join the streets, or distribution lines that connect to businesses and homes.

Once transmission from Texas is up, Entergy will jump-start its 20-year-old facility in Sulphur, then produce enough electricity to match the repaired distribution to homes and businesses. As more of the system comes online, more power can be generated.

Meanwhile, the transmission lines will be fixed allowing Entergy to reconnect with its power plants in the southeastern part of the state as well as its main conduit to the rest of the nation’s power grid.

Each of the 100-foot-high towers weigh about 40,000 pounds and have lattice frames so large that three 18-wheelers are needed to transport each one. The four feet of each tower sit on concrete pads that also need replacing.

“We’re looking, frankly, all over the world,” to find the towers, May said.

May said neither he nor his bosses have given a moment’s thought to the cost of all this. But rest assured at some point the bill will become due and all of Entergy Louisiana’s customers will be required to pay, including those in Baton Rouge and suburban New Orleans who watched the storm on television in air-conditioned homes.

In 2014, restoration charges from five recent storms added $8.15, increasing the monthly bill roughly 9% to $96.91 for a home using 1,000 kilowatt hours of electricity. The typical residential customer uses 1,300 kilowatt hours. In August, Entergy customers had paid off the debt for a couple of past storms but were still paying $2.74 extra for getting the lights on after other storms.

Hurricanes Katrina and Rita in 2005 cost about $1 billion together.

Laura did more damage, but in a more concentrated area, said Brandon Frey, secretary of the Public Service Commission, adding that replacing transmission is very expensive. “And this is the worst damage to the transmission grid ever,” he said.

Even in a place as storm-battered as the Louisiana Gulf Coast, where the names of prior hurricanes serve as waypoints that divide the past int…