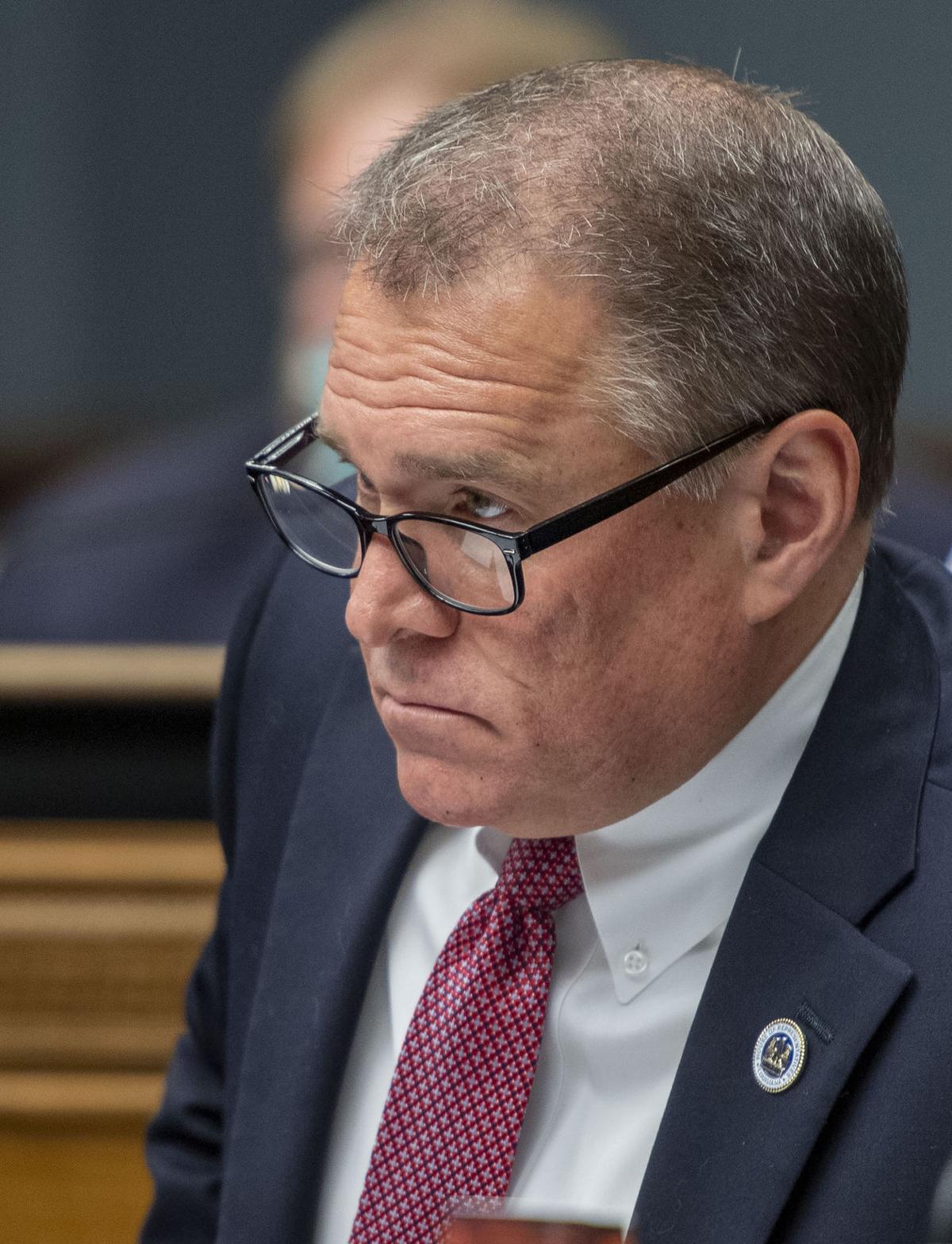 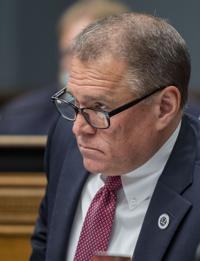 Rep. Alan Seabaugh, R-Shreveport, listens to the presentation as the House Committee on Civil Law and Procedure takes up SB418 concerning liability insurance operating budget Tuesday May 26, 2020, in Baton Rouge, La. Legislation that supporters say will lower auto insurance rates and opponents contend will seriously limit an injured personÕs ability to seek redress in courts cleared House committee 10-5 setting up a final vote later this week and a possible attempt to override an expected gubernatorial veto. 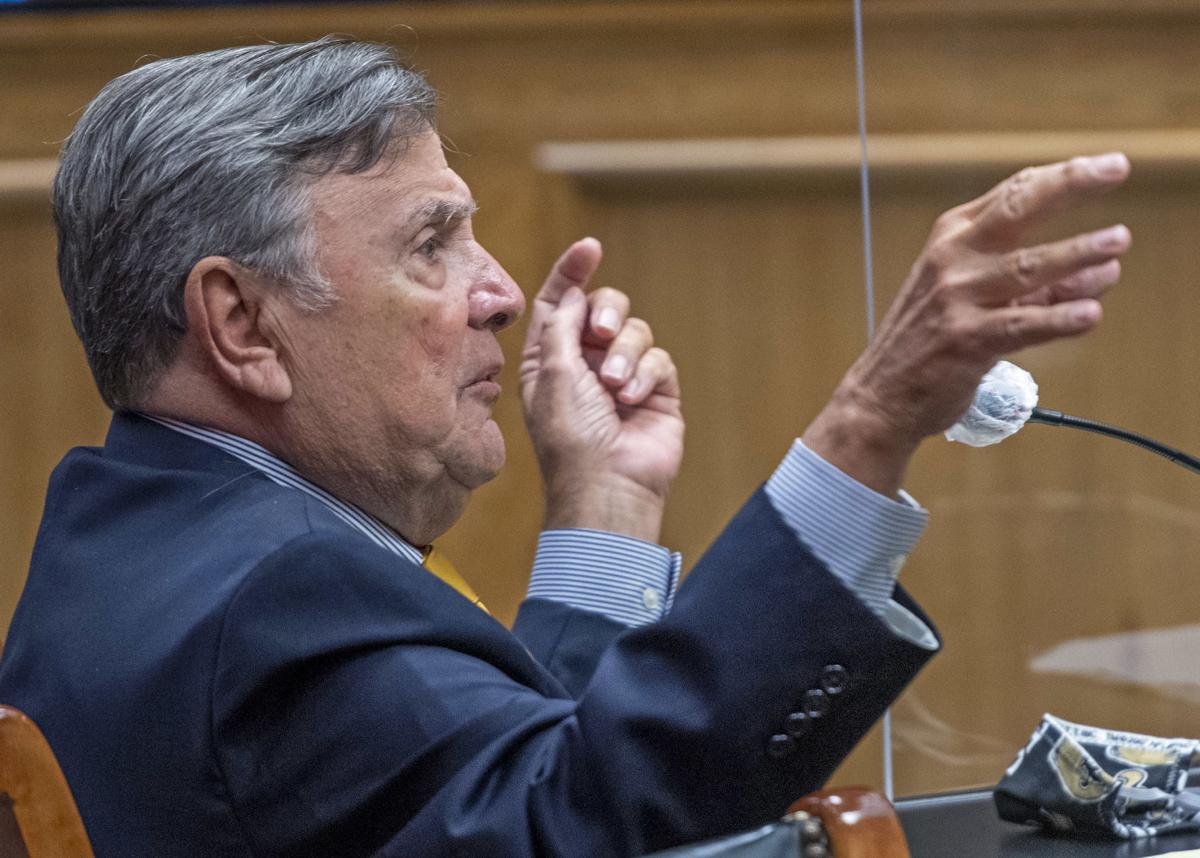 Rep. Alan Seabaugh, R-Shreveport, listens to the presentation as the House Committee on Civil Law and Procedure takes up SB418 concerning liability insurance operating budget Tuesday May 26, 2020, in Baton Rouge, La. Legislation that supporters say will lower auto insurance rates and opponents contend will seriously limit an injured personÕs ability to seek redress in courts cleared House committee 10-5 setting up a final vote later this week and a possible attempt to override an expected gubernatorial veto.

Louisiana’s Republican legislative leaders and the Democratic governor’s top assistants have gathered to discuss how far to upend the state’s civil justice system in pursuit of lower auto insurance rates.

But like the Paris peace talks of the late 1960s, early 1970s, as top-level leadership negotiates the multiple points of an omnibus treaty — now embodied in the Speaker’s Civil Justice Reform Act of 2020 — insurgents trotted down little used paths to set up for guerrilla warfare should the talks falter.

Six resolutions are headed for full votes by each chamber that would suspend each of the laws that the insurance and business community seek to change in their two-year fight over what they call “tort reform.”

Gov. John Bel Edwards on June 12 vetoed last session’s version of the Omnibus Premium Reduction Act, which would have changed five technical evidence and procedure provisions, writing that the bill is “neither a compromise nor is it a mandate to decrease rates.”

The effort to lower auto insurance prices by curtailing litigation will have to begin again as Gov. John Bel Edwards on Friday vetoed the legi…

Five omnibus bills were filed in special session as compromises and three more were basically rewrites of the vetoed legislation. But the Senate has said they want a single measure and that’s the more accommodating one sponsored by House Speaker Clay Schexnayder, R-Gonzales.

Six more resolutions were filed that would workaround a governor’s veto and the necessity of a two-thirds majority to override, which doesn’t seem likely.

The resolutions require a simple majority but not the governor’s assent to temporarily suspend existing laws. To keep a particular law suspended over the years, Republican legislators would have to renew the resolutions annually, which they plan to do until some governor is willing to sign omnibus legislation.

“This seems like you’re bringing a suicide vest to the situation,” House Civil Law & Procedure Committee Chair Gregory Miller, R-Norco, quipped at one point in the debate.

“I’d prefer a bill to be signed and stop having to do this. But if he’s going veto the bill, this is really only one of the bullets left in the gun,” Republican Shreveport Rep. Alan Seabaugh said at another point.

Wading back into the attempt to lower auto insurance prices, the Louisiana House Monday passed two bills taking different tacks to limit an in…

The resolutions address three of the five points in the omnibus bills: the amount of money that triggers a jury trial rather than a judge deciding the issue, called jury threshold; lifting the rule that forbids the court from finding out if the injured party wore a seat belt; and requiring a lawsuit not to identify the insurance company backing the defendant driver, called direct action.

Initially, omnibus supporters also wanted to extend the time available to file a lawsuit from one year after the incident to two, called prescription, in hopes of spurring more settlements before litigation is required. The governor was OK with this, but many in the business community want the earlier notification. Prescription is off the table.

The most contentious issue is called collateral source. Supporters want a law to limit the injured party to recover only what was actually paid for treatments, rather than what was charged. (Plaintiffs who bought good enough medical insurance often are treated after an accident by their own physicians, many of whom have contracted discounts with insurers.)

But collateral source is not a law that can be suspended by resolution. Rather, collateral source is a series of legal decisions stretching back to 1854. The U.S. Supreme Court then had ruled the ship that had caused the accident shouldn’t benefit because the other ship had insurance enough to cover its losses.

The three resolutions caused considerable consternation, but not enough to deter the Republican majorities on the House Civil Law committee and the Senate Judiciary A panel, which approved their own versions of the same three resolutions.

For instance, House Concurrent Resolution 20 would suspend the law that sets the jury threshold at $50,000 immediately upon passage by both chambers. Litigants could then demand jury trials on any personal injury claim, even those already filed, until August 9, 2021.

Court personnel, city court and state district court judges howled about the chaos such a decision would cause to the judicial system.

“Turmoil” was the word 24th Judicial District Judge Glenn Ansardi used. Back when he was a Republican legislator representing Kenner, Ansardi chaired the House Civil Law committee and he said couldn’t recall a time when resolutions were used in such a sweeping way.