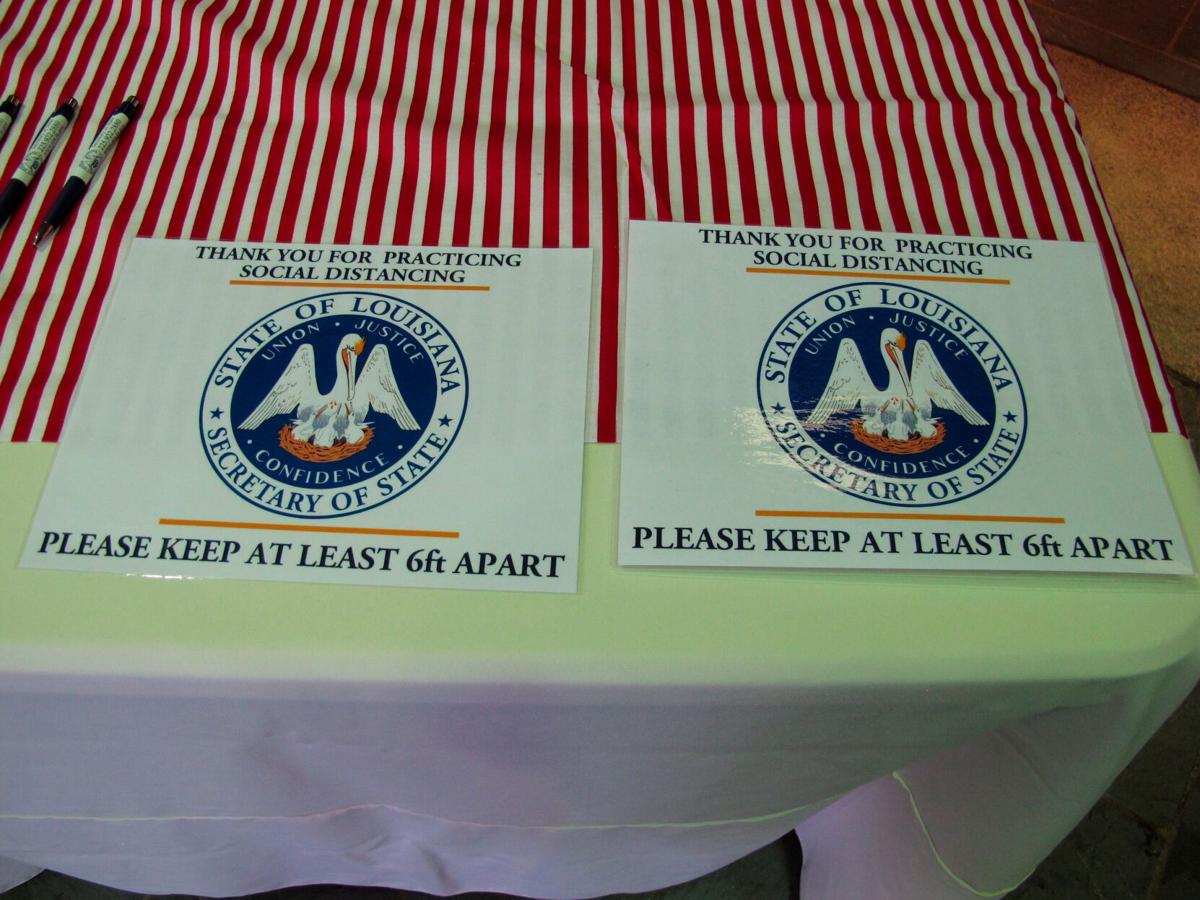 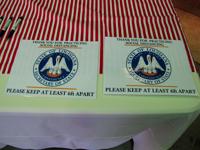 Shreveport Mayor Adrian Perkins, a Democrat, signs the registration book as he qualified for the U.S. Senate race, on Thursday, July 23, 2020, in Baton Rouge, La. Perkins is challenging Republican incumbent Bill Cassidy for the Senate seat. 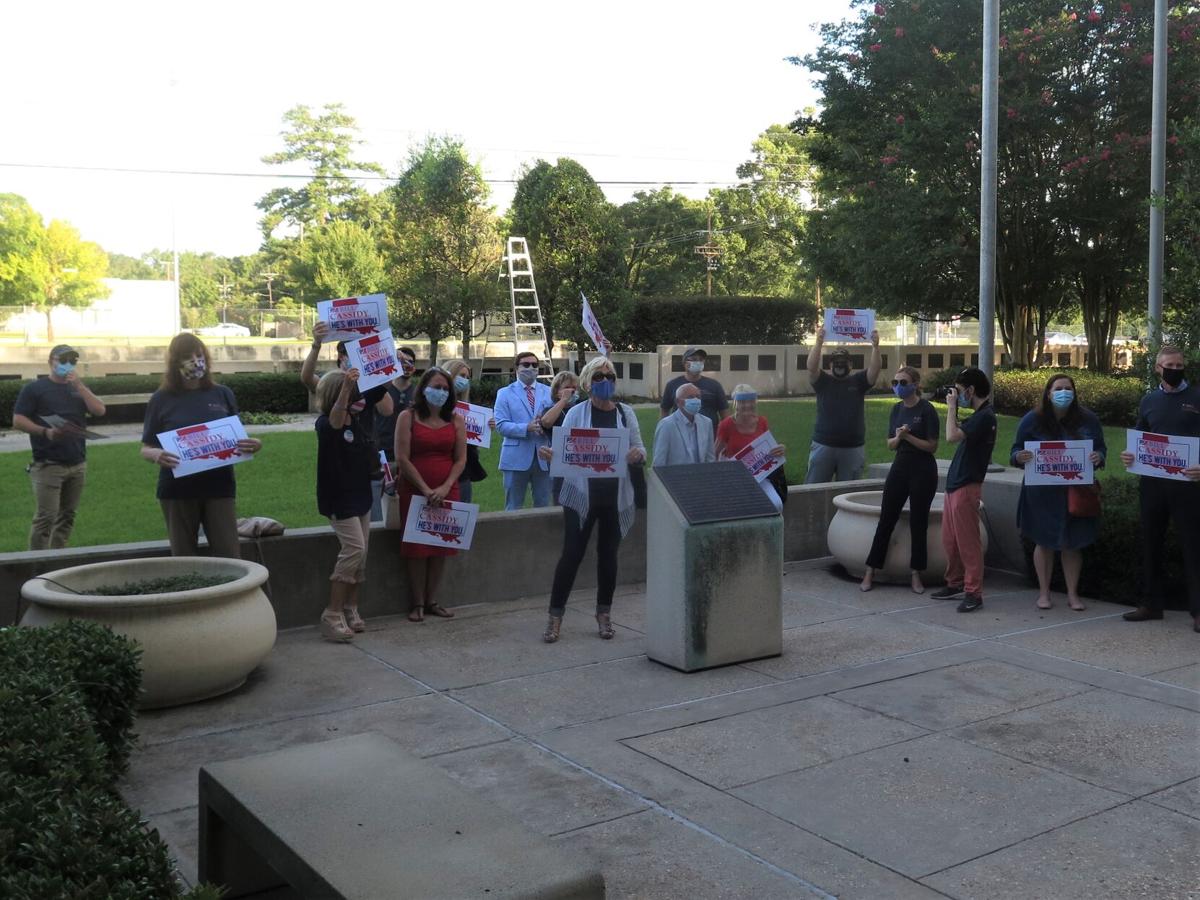 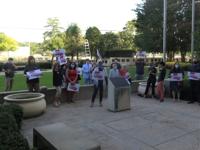 Supporters gather outside the State Archives building on Friday, July 24, 2020, to cheer U.S. Bill Cassidy, R-Baton Rouge, who arrived to qualify for reelection on the Nov. 3 ballot.

Shreveport Mayor Adrian Perkins, a Democrat, signs the registration book as he qualified for the U.S. Senate race, on Thursday, July 23, 2020, in Baton Rouge, La. Perkins is challenging Republican incumbent Bill Cassidy for the Senate seat.

Supporters gather outside the State Archives building on Friday, July 24, 2020, to cheer U.S. Bill Cassidy, R-Baton Rouge, who arrived to qualify for reelection on the Nov. 3 ballot.

The script calls for the candidate to express shock at the emotions displayed — so deep that he or she can’t help but be moved, like Cincinnatus, to selflessly lay aside the plow and put themselves forward in gallant service.

“They better be wearing masks,” Secretary of State Kyle Ardoin said flatly when informed that operatives were arranging for a spontaneous crowd scene outside his State Archives building.

The facility was specifically chosen to qualify candidates for the Nov. 3 election because it’s large enough to spread out for proper social distancing. Ardoin set up hand-washing stations and sanitizer, gloves for those who wanted them, masks for those without one.

In the name of safety, Ardoin also clipped another staple scene from traditional political imagery: adoring family standing around the candidate as the challenge is formally picked up, which nowadays requires filling out forms and writing a check. The coronavirus pandemic limited the entourage to only one other person.

When time came to greet the public in the moments after qualifying, instead of cheering supporters — it always looked crowded because the room was so small — candidates are ushered into a large auditorium. Most of the seats are roped off and only a handful of reporters are there, primarily ensuring the candidate's name is spelled correctly, along with photographers griping about the lighting.

Yes, November 2020 will be a much different election.

This doesn’t include the campaigning part in which politicians won’t be able to hold rallies or shake the hand of every diner in a restaurant. This is about the mechanics of actually staging the election.

Before the quick spread of COVID-19 required extraordinary precautions, national demographers and statisticians were predicting that, in the words of The New York Times' Nate Cohn: “The 2020 presidential election is poised to have the highest turnout in a century, with the potential to reshape the composition of the electorate in a decisive way.”

An elections technocrat turned politician when his boss had to resign in 2018, Ardoin said he wondered intellectually how the safety requirements, spiking infection rates, hospitalizations and death numbers would impact what clearly was an election that was the topic of many a conversation.

He estimated a 10% turnout for Louisiana’s July 11 primary elections. Postponed twice since April, the Democratic and Republican parties had settled on their presidential candidates months ago.

And yet, 21.2% of the roughly 3 million registered Louisiana voters participated, surprising Ardoin.

“The intensity is still there. The electorate is still polarized enough that they are going to participate regardless,” Ardoin said, adding that in the 2016 presidential election, 67.8% of the state’s 3 million registered voters participated.

“Turnout may go well beyond 70% this time,” Ardoin said.

Voters in Louisiana still like voting in person albeit an increasing number choose to cast their ballots during the early voting period.

What Ardoin noticed in the July 11 primary is that mail-in, absentee balloting was about 18% of the total vote, which is up from the usual 4%.

Political operatives are saying the number of mail-in ballots is a sea change in the political sphere, requiring a shift in timelines and strategies.

Ardoin thinks it's fleeting. Once the virus passes and life gets back to normal, the number of voters wanting to cast ballots by mail will drop back to the percentages prior to the pandemic.

Nationally, the talk is about consolidating precincts, trying to make it easier to vote in person safely.

The St. Joseph’s Academy lobby where Baton Rouge’s Ward 1, Precinct 8, cast ballots on July 11 couldn’t accommodate more than two of the 865 registered voters at one time. Lines of green tape signified 6-foot intervals on which voters could stand safely away from fellow voters. The lines trailed down the sidewalk and well into a nearby parking lot — all without cover.

Unlike the national trend, Louisiana wants to keep all the precincts, consolidate none, to provide voters familiarity, Ardoin said. “I like to walk to my precinct. … It makes me feel, I don’t know, more American.”

But Ardoin’s staff is looking to see if precincts have a larger venue on-site that could be used election day.

For instance, he’s trying the gauge the willingness of judges to give up a courtroom for the day, rather than set up the precinct’s voting machines in the usually smaller courthouse lobby. That should help keep the voters out of the elements but still space them far enough apart while waiting for their chance in the voting machine. He's buying a lot of masks, sanitizer and plexiglass to distribute at the precincts.

“No doubt about it, we’re treading into uncharted territory here,” Ardoin said.

In Louisiana's elections, technology is playing a huge role in campaigning amid coronavirus

In his bid to be elected chief prosecutor in the west bank parishes of the Baton Rouge metro area, Tony Clayton planned to hand out Krispy Kre…