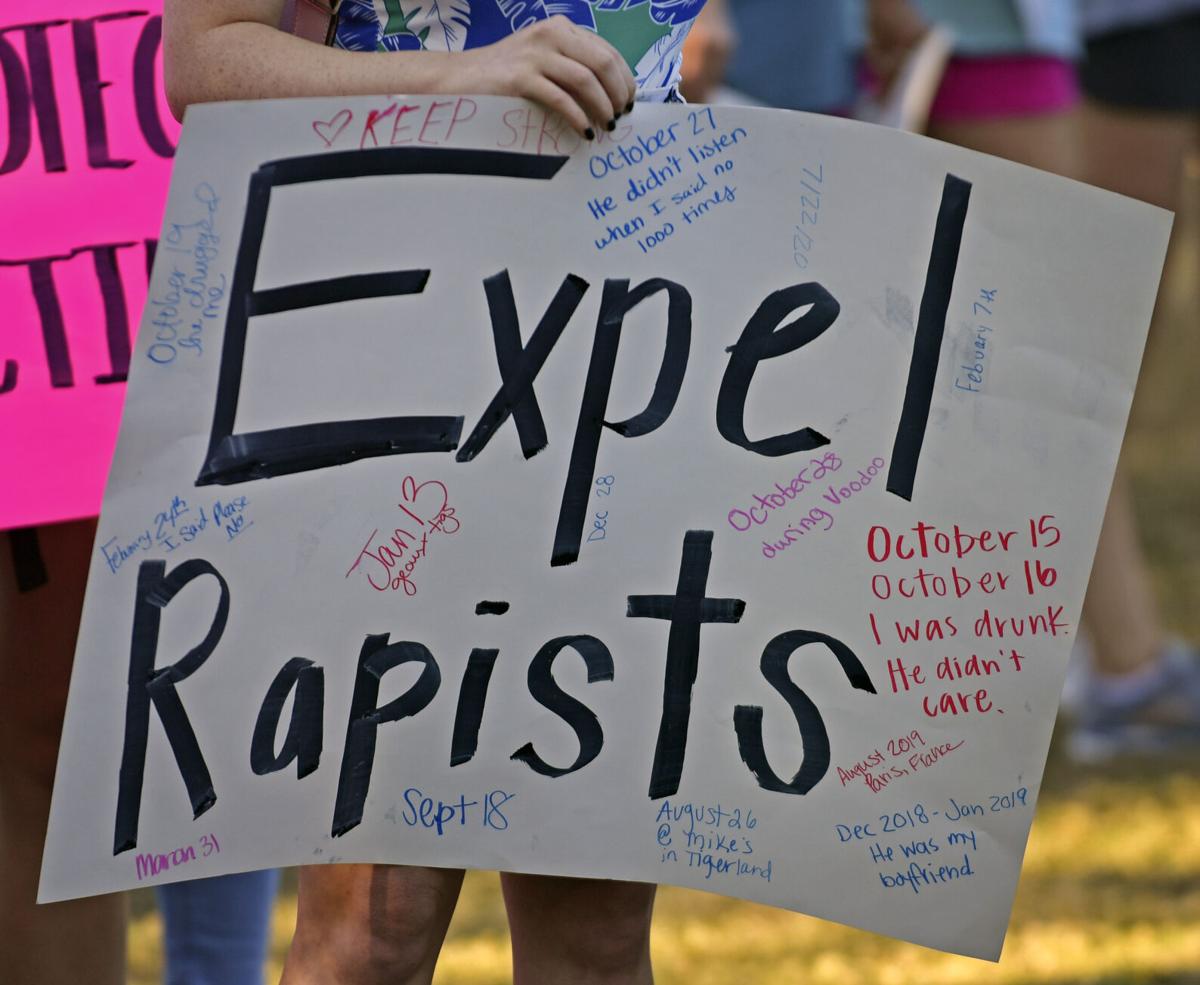 Students and community members gather on the Parade Grounds before marching to the PMAC in protest over the school's handling of sexual assault, Friday, November 20, 2020, on LSU's campus in Baton Rouge, La. 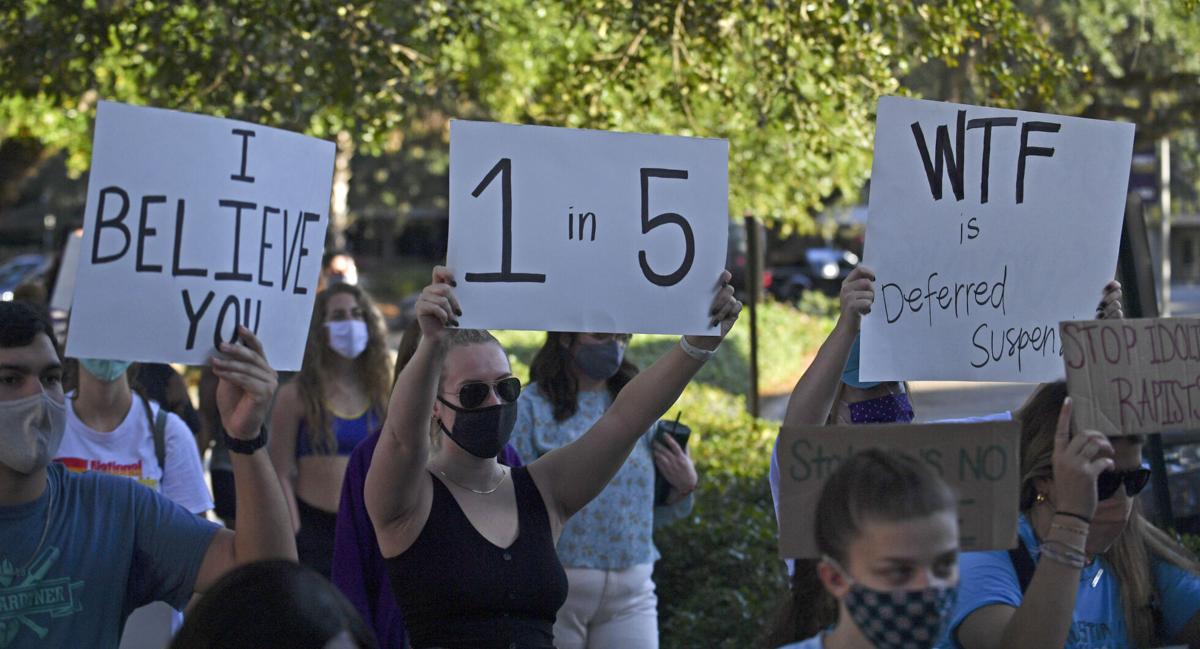 Students and community members march from the Parade Grounds to the PMAC in protest over the school's handling of sexual assault, Friday, November 20, 2020, on LSU's campus in Baton Rouge, La.

Students and community members gather on the Parade Grounds before marching to the PMAC in protest over the school's handling of sexual assault, Friday, November 20, 2020, on LSU's campus in Baton Rouge, La.

Students and community members march from the Parade Grounds to the PMAC in protest over the school's handling of sexual assault, Friday, November 20, 2020, on LSU's campus in Baton Rouge, La.

The people choosing LSU’s next leader talk a lot about diversity and inclusion, creating an environment where young students can thrive regardless of race, gender and background.

“We want males, females, a wide diversity of races, creeds, you name it,” in the pool of candidates, said Lester W. Johnson, a vice chancellor in Monroe and one of 20 members on the LSU Presidential Search Committee.

The panel’s task is to find and recruit someone for the big job of running LSU’s system of universities, colleges and medical schools along with being chancellor of the flagship Baton Rouge campus. The post has remained open since December when F. King Alexander resigned to become president of Oregon State University.

A lot of good words, but in practice what has LSU done about young girls who claim to have been sexually assaulted on campus?

LSU mishandled sexual misconduct complaints against students, including top athletes, according to an investigation by USA Today.

Not much, according to a report last week by USA Today. The exposé detailed how LSU coaches and administrators pretty much ignored allegations against nine athletes and others on the Baton Rouge campus — despite federal and state laws that requires reporting, police intervention and further investigation.

LSU declined to make available 10 coaches and administrators involved. USA Today had to sue LSU to get access to the police reports. One woman has filed a lawsuit, scheduled to be heard Monday in Baton Rouge’s 19th Judicial District Court, to get access to complete LSU records involving her own case.

But the university did issue a statement: “We are unwavering in our commitment to respond promptly to any reports of misconduct, to investigate these reports in a manner that is fair and equitable, to support victims of sexual assault, and to protect the privacy of our students according to the law.”

The search committee didn’t mention the scandal Friday when meeting with its headhunters, Parker Executive Search of Atlanta, to describe the attributes they would like to see in LSU’s next chief executive.

Last week started with Samantha Brennan’s image being published in newspapers across the country as she spoke out for the first time, saying L…

One of the search committee members, Verge Ausberry, executive deputy director of athletics and executive director of external relations for the university, was one of those officials whose actions raised questions about how tightly LSU sexual assault policies are embraced. Ausberry was texted by one of the football players after beating up his girlfriend and did nothing, according to The Advocate | The Times-Picayune. Ausberry said that during a phone call the athlete retracted his confession. Ausberry didn’t pursue the matter further.

Should Ausberry continue to serve on the committee that will choose the next LSU leader?

“Absolutely,” James Williams, the New Orleans lawyer chairing the LSU President Search committee, said in an interview Thursday. Williams would not say why and couldn’t say if the sexual assault revelations would make his committee’s task more difficult to recruit the proper candidate.

John Bel Edwards 'extremely troubled' by LSU abuse investigation, but no calls for ousters yet

Gov. John Bel Edwards on Thursday declined to call for the ouster of any LSU officials in the wake of a scathing investigation that showed sch…

Gov. John Bel Edwards declined comment Thursday. But he did say, ”We cannot tolerate any instances where someone might willfully turn a blind eye to credible allegations of this type of violence and abuse. If that happened, we need to know about it.”

Edwards’ appointees now control the LSU Board of Supervisors, which makes hiring and firing decisions of administration, including athletics.

Baton Rouge businessman Richard Lipsey, a super-donor who isn’t on the search committee, also voiced concern but placed the blame on former President Alexander, whom he opposed, since the activities happened on Alexander’s watch.

With Texas A&M, Florida State, Wake Forest and host of other universities looking for new leadership, would possible issues in handling sexual assault complaints play a role in attracting a top-flight candidate?

Lipsey says no. Many institutions around the country are dealing with the same issue. National surveys, like the one done by Inside Higher Education last year, found that 13% of college students experienced non-consensual sexual contact and that common problems include underreporting and nonresponsive school procedures that often require victims to seek redress in court.

As sexual assault allegations on campus are ubiquitous, Lipsey said the search committee should focus on finding an executive with experience running large institutions, promoting research, and inspiring faculty, students and the community.

Lori L. Martin, a sociology professor on the search committee, came closest Friday to addressing how LSU’s long tradition of insularity could influence the mechanics of finding a new leader.

“I think what would also be important for a successful candidate is that they recognize that while there is an interest in expanding diversity, equity, inclusion on campus, there’s also a great bit of resistance, both on the campuses and externally. And so, we really need someone who is able to navigate that situation.”

One of Louisiana’s leading advocacy organizations for sexual assault survivors asked LSU to work more closely with the group for years, but it…