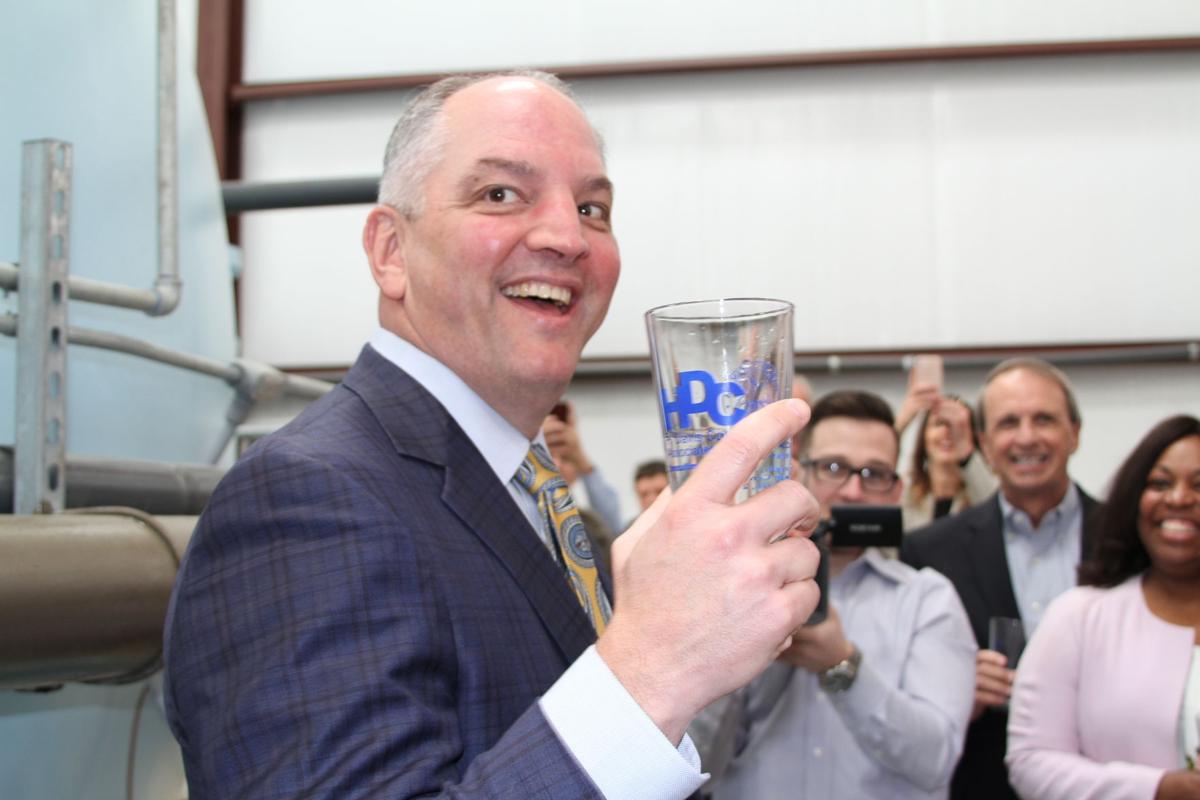 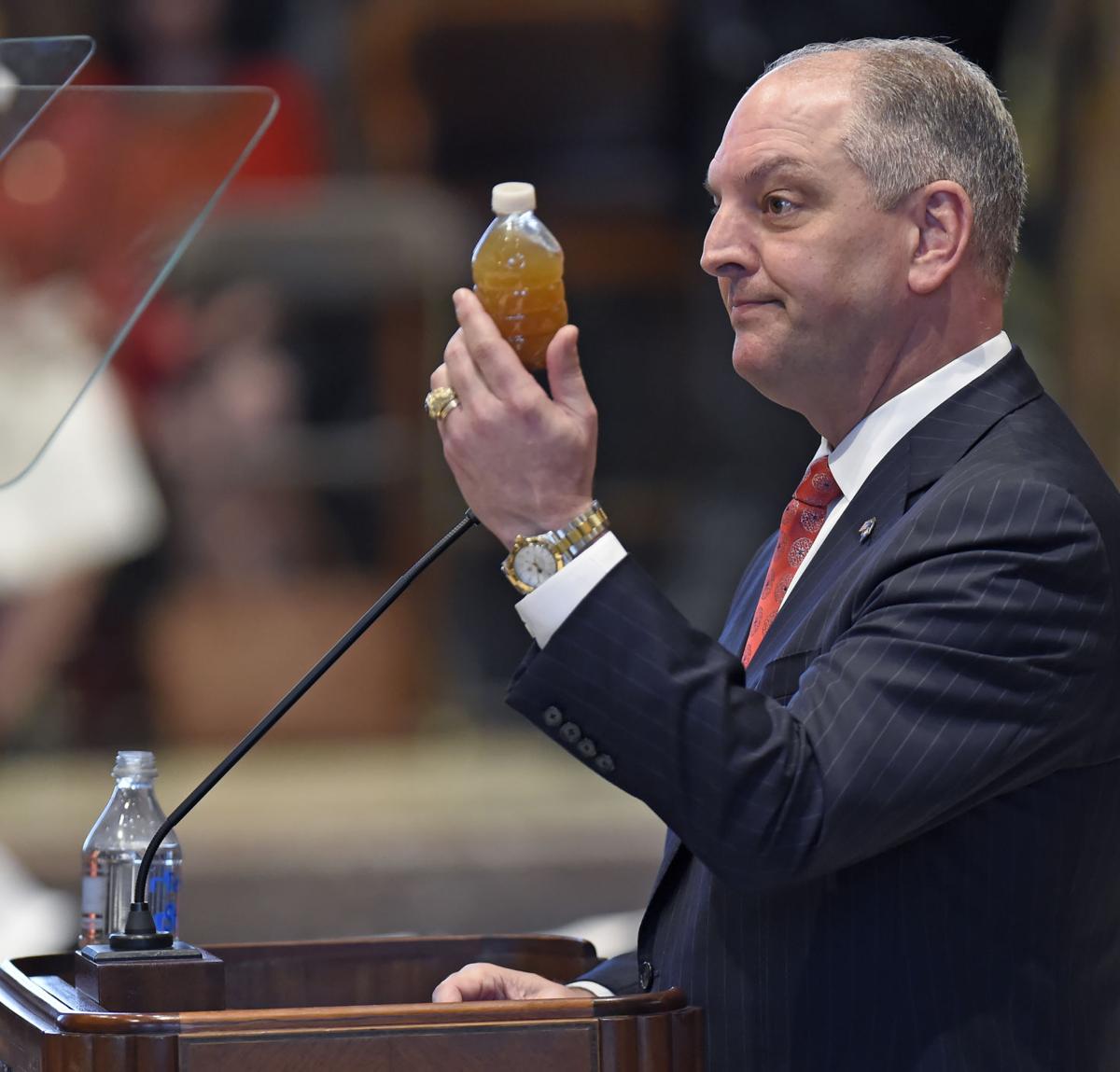 Gov. John Bel Edwards makes a point about water infrastructure with a brown bottle of water from the town of St. Joseph, La., before their water system was repaired while speaking to the joint session of the Legislature April 8, 2019, in Baton Rouge.

Gov. John Bel Edwards makes a point about water infrastructure with a brown bottle of water from the town of St. Joseph, La., before their water system was repaired while speaking to the joint session of the Legislature April 8, 2019, in Baton Rouge.

The brand-new $9 million system Louisiana taxpayers bought so that the 900 or so citizens of the northeast Louisiana town of St. Joseph could drink water without dangerous levels of lead and copper has developed another health issue that will be expensive to fix.

Despite new pipe and a state-of-the-art filtration system, the water still comes from an underground aquifer that has so much mineral content that chemical treatments are required. Those treatments have accumulated byproducts — TTHMs, or total trihalomethanes, and HAA5, or Haloacetic acids — that can cause cancer with long-term exposure.

Our Views: Many St. Josephs are out there

After more than a year of work, and a bailout of about $9 million in state and federal funds, the water in a small Tensas Parish town is once …

The water is safe for the time being, said Dr. Jimmy Guidry, the state’s health officer, but the likelihood of cancer over the long term means St. Joseph, again, is out of compliance with safe drinking water laws.

State health officials and engineers are trying to come up with a way to fix the problem, Guidry said.

For state Rep. Jack McFarland, however, St. Joseph is the canary in the mine of Louisiana’s most pressing problem that the gubernatorial candidates haven’t discussed. True, the campaign has been so filled with bumper sticker bromides that no real issues have been explored. After all, the first question of the first time all three major gubernatorial candidates appeared together to talk about issues — two weeks before early voting starts — was about vaping.

But a fast depopulating rural Louisiana is leaving communities on the edge of health and safety crises. The time has come to stop talking rhetoric for the base and focus on a problem that will soon engulf all the state’s taxpayers, said McFarland, R-Jonesboro.

“Nobody is even talking about rural, north Louisiana,” McFarland said. “We’re going to be a burden on the state.”

More to the point, McFarland points out, about half of St. Joseph’s residents live on fixed incomes, mostly retirees receiving social security. Among the younger folk, unemployment rates are in double digits, largely because no work is available. So, the costs of fixing St. Joseph again likely will fall to all the state’s taxpayers.

Gubernatorial candidates natter on about residents leaving Louisiana in the broad daylight. But a more accurate picture is younger people are leaving small towns north of Interstate 10 and going to Baton Rouge, New Orleans and Lake Charles, where good paying jobs are plentiful. As they leave, so are the businesses, and the tax base that pays for services, such as drinking water and law enforcement, dries up as well, McFarland says.

The state has taken over four communities because of failing finances, pushing elected officials out of the way with court-appointed administrators with near-dictatorial power to raise taxes and fees, rearrange government structures and fire government employees. Two other towns are in the process of appointing a fiscal administrator.

Another 18 towns are at the precipice, according to a Louisiana Legislative Auditor watchlist.

The state moved Monday evening to take over two more fiscally strapped municipalities, bringing to seven – the most ever – the number of towns…

McFarland has backed several bills that would increase state participation in efforts to attract investment as well as ease loans for businesses wanting to expand in the small towns. But in a Legislature dominated by the New Orleans and Baton Rouge caucuses, those efforts have gone nowhere.

The 43,795 residents in Bienville, Jackson and Winn parishes, which make up the core of McFarland’s district, could all sit comfortably on the east side of Tiger Stadium. And those populations have declined by 5 percent since 2010, according to the U.S. Census Bureau.

Shortly before Christmas the U.S. Census Bureau reported that Louisiana was one of nine states that lost population with 10,840 fewer people a…

“I’d like to see LED (the state’s economic development arm) in rural Louisiana. I’d like to see some investment,” McFarland said, adding that the state has no plan. “We have to reevaluate where we are going because, inevitably, the state is going to have to pay.”

Without guidance from the top, state officials are stumbling along a path that would consolidate services, where possible, between the struggling towns and parishes. But that alone is not the answer. The state looked at merging St. Joseph with Tensas Parish’s water system but found building a new system was cheaper.

Dissolving a town’s incorporation and absorbing the population is a burdensome legal task that in the end leaves parish police juries with a population that requires services without contributing much to the tax structure.

“We’re going down the Big Brother road,” said state Sen. Mike Walsworth, R-West Monroe. “We need to decide if that’s the route we want to go. ... Voters need to struggle with that.”

Lanny Keller: There's a crisis in small-town Louisiana -- and it's only getting worse

Maybe the population numbers are not that big, and that’s one of the problems, but there is a crisis in small-town Louisiana.