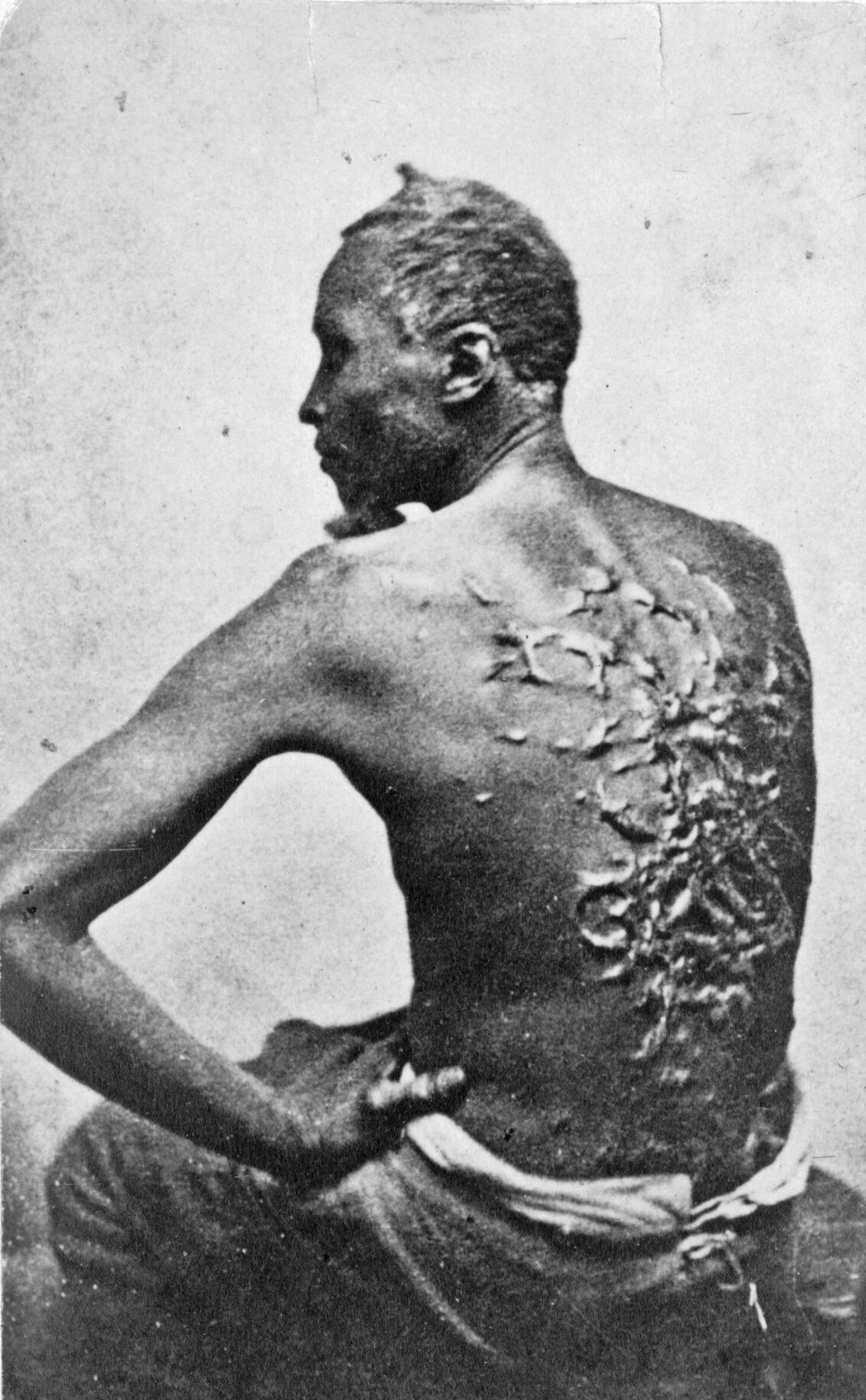 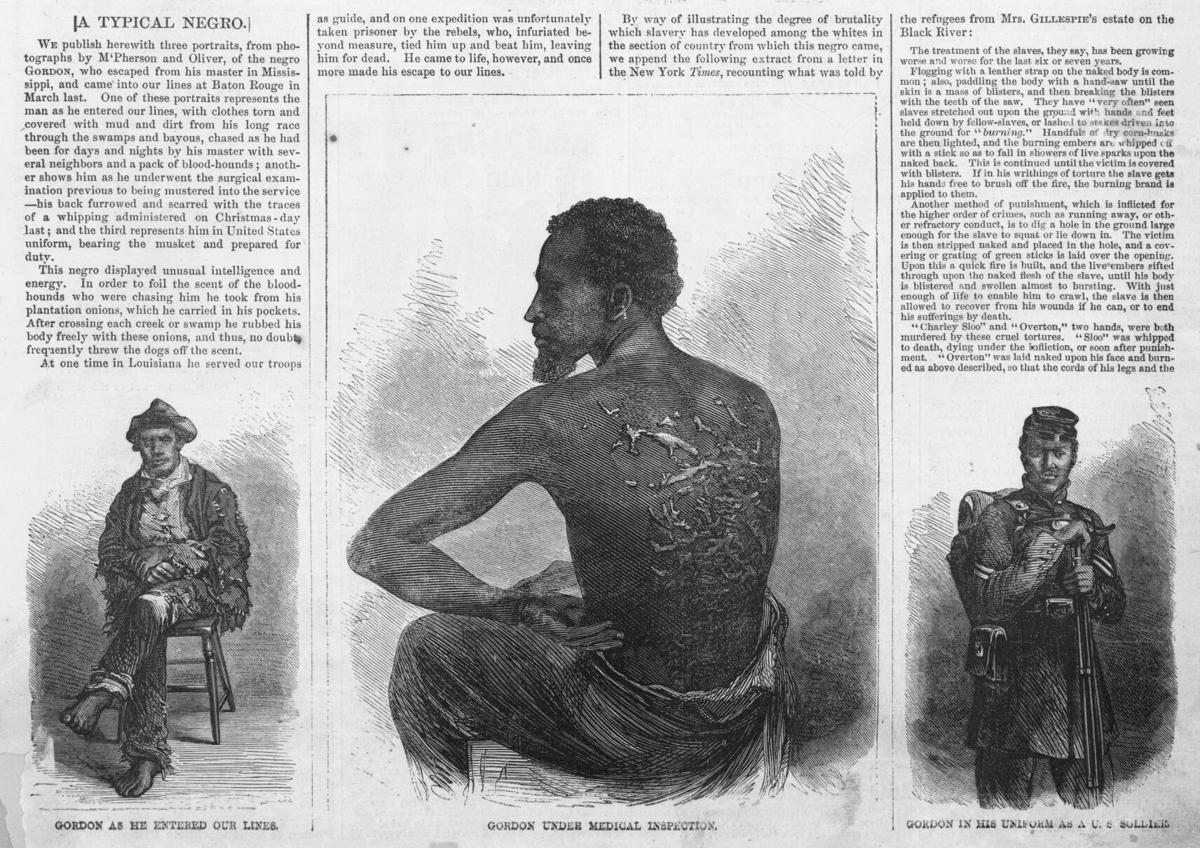 Pictured is a Harper's Weekly edition published on July 4, 1863. Three illustrations show an escaped slave named Gordon in tattered clothing upon his crossing of Union lines, welts from being whipped upon his back, and in uniform after he had joined the Union Army. Text describes his escape as well as forms of brutal punishment suffered by slaves. 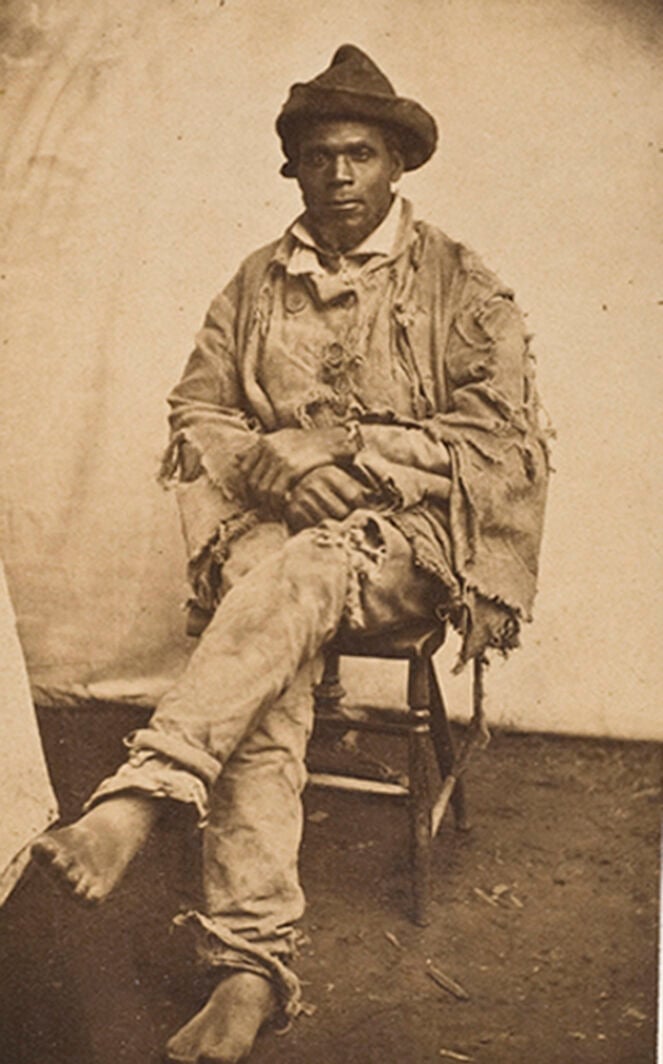 Gordon in pictured here 1863 by photographers William D. McPherson and his partner Mr. Oliver, just after he reached a Union Army camp in Baton Rouge, Louisiana.

Pictured is a Harper's Weekly edition published on July 4, 1863. Three illustrations show an escaped slave named Gordon in tattered clothing upon his crossing of Union lines, welts from being whipped upon his back, and in uniform after he had joined the Union Army. Text describes his escape as well as forms of brutal punishment suffered by slaves.

Gordon in pictured here 1863 by photographers William D. McPherson and his partner Mr. Oliver, just after he reached a Union Army camp in Baton Rouge, Louisiana.

How about a statue of “Whipped Pete”?

Like characters in a Eugene O’Neill play, Louisiana continually pushes down its past sores, hoping they’ll go away, only to see the unreckoned memories periodically burst out, causing despair. Signs are clear for another such outbreak over Louisiana’s Confederate and segregationist past.

Baton Rouge Mayor Sharon Weston Broome’s Commission on Racial Equity and Inclusion report downplayed how to handle Confederate-named streets. She wants to focus on removing systemic economic barriers that would help minority firms expand their businesses, create jobs, and on education, rather than get tied down in a round-robin rumble over names on streets that are symbolic reminders of the city’s racist legacy.

Eugene Collins, president of the local chapter of the NAACP, praised the 60-page report, then criticized the section on infrastructure, saying, “that portion on street names just took a softball approach to achieving racial equity.”

New criticisms are emerging over the effort to consider changing Baton Rouge street names honoring Confederate generals, with the head of the …

Much of the focus is on a residential avenue in the Shenandoah neighborhood named for Nathan Bedford Forrest. He was a Memphis slave trader who became one of the Confederacy’s most successful generals. He also commanded troops who murdered more than 300 Black soldiers who had surrendered at Fort Pillow in Tennessee. After the Civil War, Forrest joined the Ku Klux Klan and became its leader as later did his grandson.

Unlike Baton Rouge, which has a convoluted political process for changing street names that is full of cul-de-sacs, only nine members of the Board of Supervisors are needed to change the names of buildings and roads and remove statues on LSU campuses. Later this month, a committee charged with researching who the university has memorialized will be turning over its report to the Building Name Evaluation Committee. That panel will recommend a sheaf of changes to the supervisors, whose decision surely will be met with a storm of protest.

Which brings us back to a statue memorializing “Whipped Pete” from the Civil War. “Whipped Pete” is the name of a widely distributed photograph. His real name was Gordon and the image of welts on his back is credited with persuading the North to make ending the South’s peculiar institution a war goal.

“We’re talking about the history, and that’s part of the history. Gordon is more closely connected to Baton Rouge and Louisiana history than Nathan Bedford Forrest,” said Albert Samuels of Southern University. He backs the idea of a statue, particularly in Louisiana where reminders of the old Confederacy are easy to find but almost nothing acknowledges slavery.

“We haven’t just shied away from the topic of slavery; we’ve lied about it. We’ve said it wasn’t that bad," said Samuels, who teaches political history.

The most popular publication at the time, Harper’s Weekly, in its July 4, 1863, edition ran an account of what happened.

Gordon ran away in March 1863 from the Lyons plantation on the Atchafalaya River, a little north of what is now Krotz Springs. Rubbing onions on his body to throw off his pursuer’s dogs, Gordon walked barefoot through swamps — now traversed in about half hour on elevated U.S. 190 — before running into Union troops who ferried him to Baton Rouge. It took about 10 days.

While getting a medical examination, Yankee doctors were shocked by the sight of his back, though one wrote that he had seen dozens that just like it. The famous photograph was taken in the doctor’s tent about where Florida Street now crosses Interstate 110 at the edge of downtown Baton Rouge.

“It was the first viral image of the brutality of slavery that the world saw,” Antoine Fuqua told the Hollywood trades in June 2020. He is directing a movie starring Will Smith about Gordon, which begins production later this year.

“You can’t fix the past, but you can remind people of the past and I think we have to, in an accurate, real way. … We have to face our truth before we can move forward,” Fuqua added.

As president, Donald Trump repeatedly criticized the movement to remove Confederate monuments and flags. At a June 2020 rally in Tulsa, Oklahoma, Trump said: "This cruel campaign of censorship and exclusion violates everything we hold dear as Americans.”

He spoke a few days after the 99th anniversary of the June 1, 1921, racial rampage, during which a White mob stormed through the Greenwood District of Tulsa, burning businesses, killing hundreds of Black residents, injuring hundreds more.

Sadly, much of America learned about the Tulsa race massacre from the Netflix mini-series “The Watchman,” rather than in school.

But did you know about the Thibodaux massacre of November 1887? Black farm workers went on strike seeking a pay increase to $1.25 daily, payable in cash rather than script that could only be used in the company store. Planters sent White paramilitaries to terrorize Blacks, killing several hundred, including children. Hundreds more were injured or left homeless. That's also not mentioned in school books.

In defending Confederate monuments, political editor and commentator John Daniel Davidson wrote in The Federalist, a conservative publication: “A more mature society would recognize that the past is always with you and must always be kept in mind. There’s a reason Christians in Rome didn’t topple all the pagan statues and buildings in the city or raze the Colosseum.”