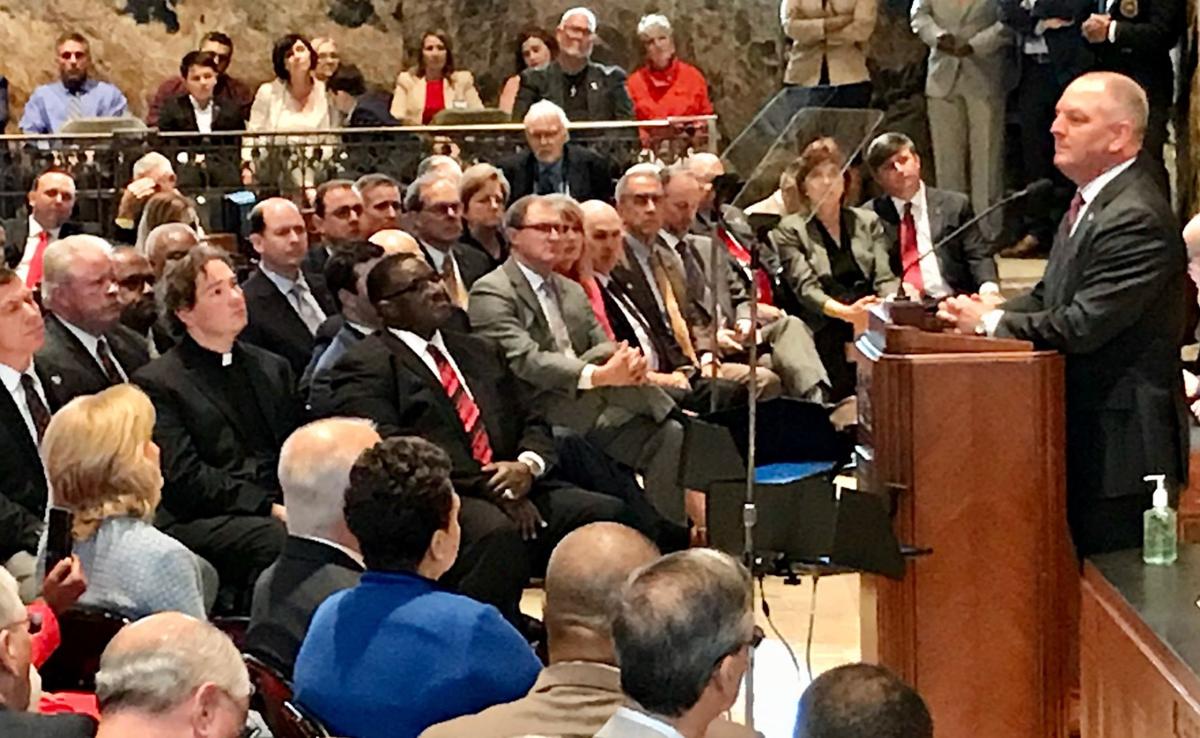 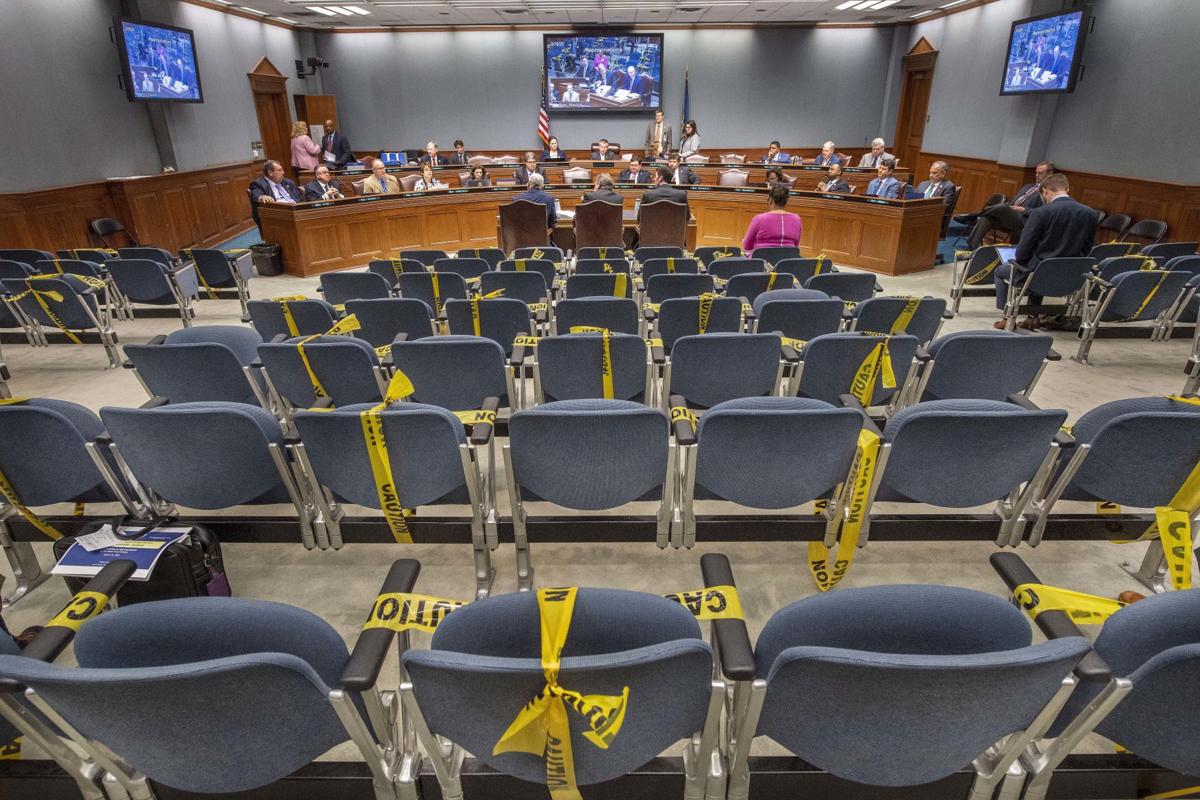 Seats in the House Appropriations Committee room were taped off to prohibit people from sitting next to each other at the State Capitol in an early effort to fight the expansion of the coronavirus Monday March 16 in Baton Rouge. Ultimately, the Legislature suspended its session. 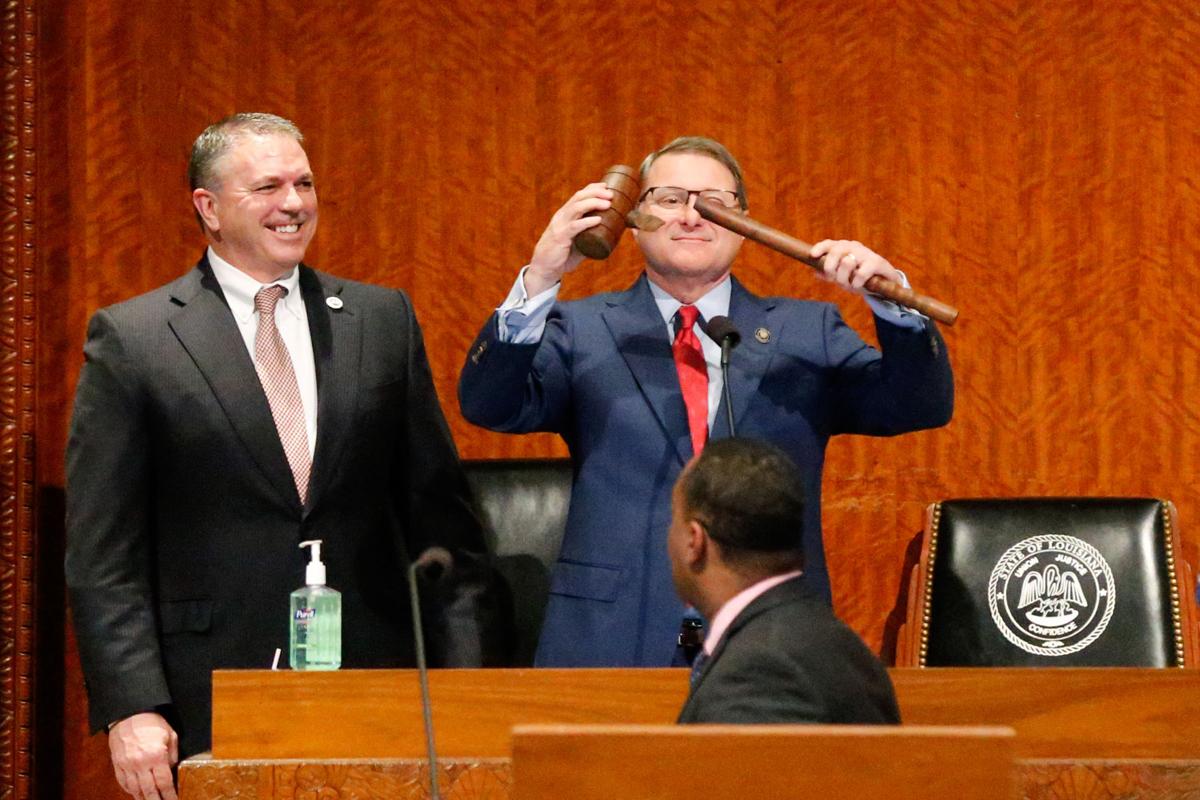 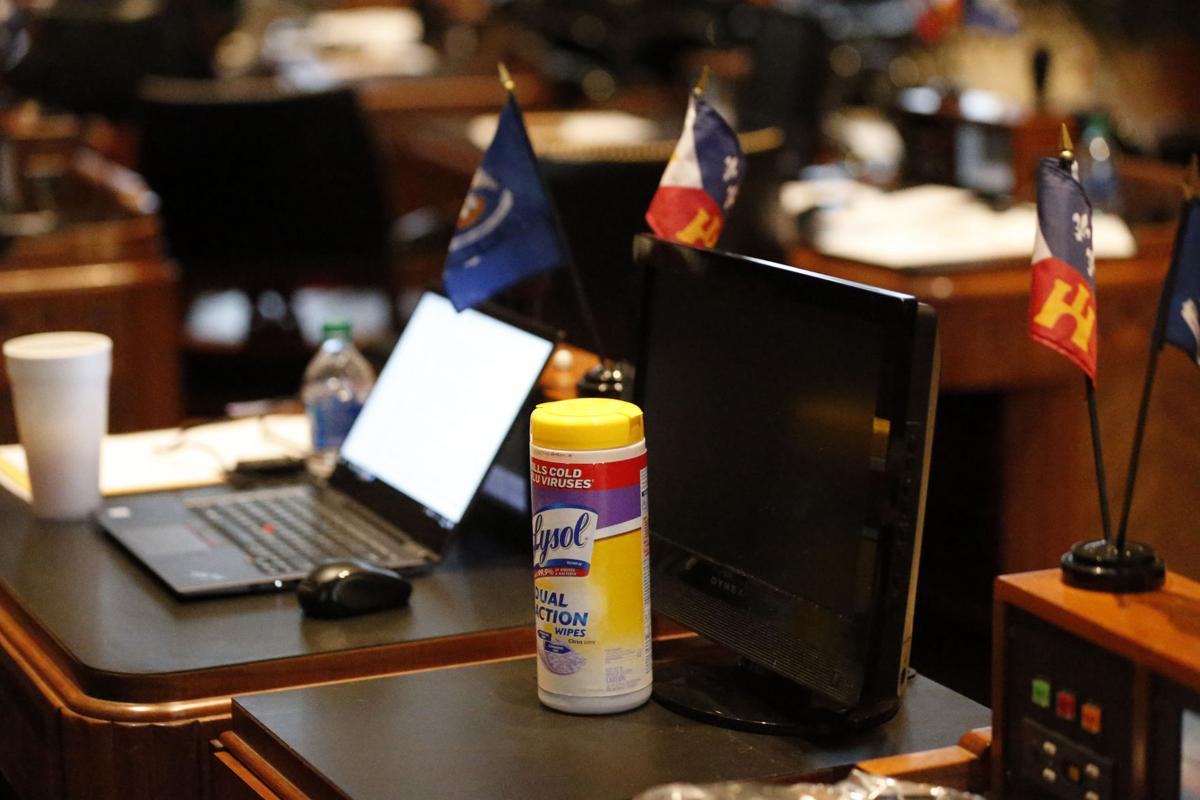 A container of disinfectant wipes sits next to the desk of Rep. Jerome Zeringue, R-Houma, during the start of the 2020 general legislative session in Baton Rouge, La., Monday, March 9, 2020. Gov. John Bel Edwards announced at the session that the state's first confirmed case of the COVID-19 Coronavirus was discovered today in Jefferson Parish. (AP Photo/Gerald Herbert)

Seats in the House Appropriations Committee room were taped off to prohibit people from sitting next to each other at the State Capitol in an early effort to fight the expansion of the coronavirus Monday March 16 in Baton Rouge. Ultimately, the Legislature suspended its session.

A container of disinfectant wipes sits next to the desk of Rep. Jerome Zeringue, R-Houma, during the start of the 2020 general legislative session in Baton Rouge, La., Monday, March 9, 2020. Gov. John Bel Edwards announced at the session that the state's first confirmed case of the COVID-19 Coronavirus was discovered today in Jefferson Parish. (AP Photo/Gerald Herbert)

Remember a few weeks ago when the Louisiana Legislature was gearing up for a big fight on tort reform?

A lot of business people received a good many free lunches and free drinks as “grassroots” groups held dozens of “forums” around the state. They all followed pretty much the same routine as the Feb.13 “Crisis Point” luncheon at the City Club of Baton Rouge. The soirees featured “expert” speakers who started with an awkward homage to the LSU football champions — at “Crisis Point,” Sherman Joyce, of the American Tort Reform group in Washington, D.C., played on his nickname, “Tiger” — to pivot to the need for teamwork to defeat “trial lawyers.” They argued that tort reform would lead to less expensive auto insurance.

On the other side, lawyers held their own “grassroots” events, saying tort reform would limit injured individuals from filing and winning lawsuits against businesses and insurance companies. They pushed competing legislation that would restrict use of certain demographic information, like whether the customer still has a spouse, when calculating rates.

The big game expected March 9 when the Louisiana Legislature convened was postponed March 16 with the session’s suspension and is now a distant memory because of the novel coronavirus.

Legislators will return to Baton Rouge on Tuesday to hit the legal timelines for new bills and make provisions for passing a budget for spending beyond June 30, then adjourn until April 13 to coincide with the governor’s “shelter in place” directive.

At least that is the plan being discussed.

Provided the governor doesn’t extend his directive — a distinct possibility — the Legislature is left with 48 calendar days before the constitutionally mandated June 1 end. They could call a special session in June to pass an operating budget in time. Theoretically, they also could work every single day of the 48 without running afoul of the constitutional timeline that permits 60 days in session during 85 days on the calendar.

Legislators often put in long hours in the final days of a session, but the usual schedule is lawmakers sliding into the State Capitol on Monday, leaning into the work on Tuesday and Wednesday, leaving early on Thursday for a three-day weekend.

“We can work on Fridays and Saturdays to get a lot of the bills done,” said state Sen. Barrow Peacock, the Shreveport Republican who chairs the Senate Judiciary A, which had planned to take up tort reform at its next meeting prior to the session’s suspension.

Peacock still wants to hold hearings and take testimony from both sides on tort reform, which he supports. But a lot of that depends on the safety rules in place next month.

River Ridge Republican Sen. Kirk Talbot, the chief sponsor of that sweeping tort reform proposal, Senate Bill 418, is sanguine about the measure he has been pushing for a couple of years now.

“A lot of chairmen are looking at seeing what can wait until next year,” Talbot said.

He believes enough legislative time and will is available for tort reform but acknowledges that his colleagues’ minds are now elsewhere.

“Nobody woke up and said, ‘Maybe my car insurance isn’t that expensive.’ But obviously (COVID-19) is sucking a lot of air out of the room,” Talbot said.

It’s not just tort reform. The annual effort to establish a higher minimum wage was expected to generate controversy.

New Orleans Democratic Sen. Troy Carter says on the one hand, hourly workers need a boost, now more than ever, as do the recently laid off. “But I’m also sensitive that this is going to be a challenging time for businesses as well,” he said. The federal stimulus package includes additional requirements, such as paid sick leave, that a lot of small businesses will struggle to pay.

Bills aimed at helping people recover will dominate legislators once they get back into full swing, said Stephen Waguespack, the state’s chief business lobbyist.

“We are in uncharted waters,” said Waguespack, president and CEO of the Louisiana Association of Business and Industry. LABI is a prime pusher of tort reform and spent hundreds of thousands of dollars last fall to elect legislators who would vote for the measure. It still needs a hearing, he said.

“Butterfly naming bills are not right for 2020 anymore,” Waguespack said. Two bills are ready for a vote in each chamber naming the Gulf Fritillary as the official state butterfly.

“We shouldn’t waste time on those games. This is going to be a wartime session. No popping rubber bands and the usual shenanigans. We need to focus on jobs, investment, and deal with the intense pinch right now.”

In fight over car insurance rates, Republicans hope to reach a deal with John Bel Edwards

Louisiana can handle a few weeks of coronavirus closures. Any longer could cause budget problems.

A mere two weeks ago, Louisiana legislators headed to pre-session parties with their biggest fiscal worry being how much of the surplus would …