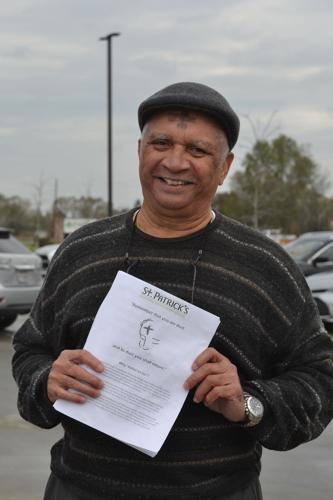 Edgar Cage, an organizer with Together Baton Rouge and Lay Eucharist minister at St. Patrick’s Church assists in Ashes to Go Wednesday, Feb. 26, 2020, and offers education material on Ash Wednesday to patrons at Community Coffee House. 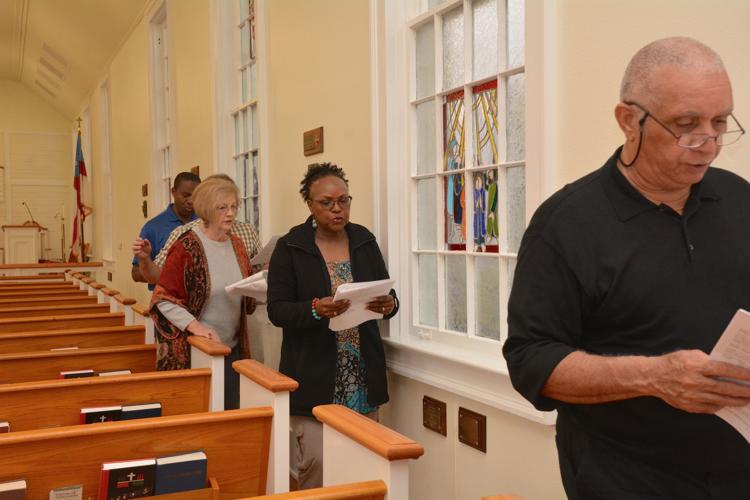 Edgar Cage leads the group to the next Station of the Cross at St. Patrick Episcopal church in Zachary on Friday.

Edgar Cage, an organizer with Together Baton Rouge and Lay Eucharist minister at St. Patrick’s Church assists in Ashes to Go Wednesday, Feb. 26, 2020, and offers education material on Ash Wednesday to patrons at Community Coffee House.

Edgar Cage leads the group to the next Station of the Cross at St. Patrick Episcopal church in Zachary on Friday.

“I feel like David but they’ve reduced the size of my stone to a grain of sand,” Cage said after leaving a Louisiana House committee hearing considering one of many bills that favor business but remove revenues from local governments.

Seventy-nine opponents had emailed their testimony because they couldn’t come to the State Capitol during the coronavirus pandemic. Rather than reading the emails aloud, as Cage wanted, the missives were attached en masse “in the official” record. Less than a minute later the committee voted.

Make no mistake, Cage knows the score when facing the Goliath of business and energy special interests. And he doesn’t fool himself into thinking that most in the Republican-dominated Legislature would vote against business interests. But, legislators in the session that ends June 1 have had little opportunity to hear the other side.

“If those people (email senders) were here, they would have to been allowed to testify and (committee members) would have had to listen,” said Cage, of Together Louisiana. “My big problem is that this is supposed to be a democratic process.”

75% in attendance and many without masks: Louisiana legislature reconvenes amid coronavirus

The pandemic caused by an airborne virus that often causes death necessarily requires keeping people apart during a gathering that usually decides policies up close and personal in crowded halls and hearing rooms. That social distancing has come at the cost of creating an echo chamber where legislators’ preconceived notions are reinforced by lobbyists and partisans. That isolation is what is fueling so much legislation that expand tax breaks, Cage said.

It’s the flood of bucket-list bills that led Senate health committee chair Fred Mills to take the mic last week in a passive-aggressive scolding of the House for sending to the upper chamber about 40 health-related bills that probably could have waited to a future session. The problem, according to the Parks Republican, is that many handicapped and vulnerable people are going to want to attend committee hearings.

“These people have called me from all over the state basically saying I do not want to come to the Capitol and my voice will not be heard,” Mills said.

On the other hand, after a seven-week holiday when COVID-19 closed the Capitol, legislators are trying to find some way to continue government during emergencies. The state Constitution requires continuity of government but also that the Legislature does its business at the State Capitol.

They have come down to a handful of measures that would change the laws requiring elected officials to make policy decisions at public meetings with public input.

Two of those bills — House Bill 798 and Senate Bill 466 — would give the Legislature the ability to debate and vote in teleconferenced hearings. Both have passed their chamber of origin and could be headed to the governor’s desk by the end of the week.

To avoid 'catastrophic cuts,' Louisiana could use $1B in federal funds to balance budget

Slidell Republican Sen. Sharon Hewitt, chief sponsor of SB466, is planning to propose a constitutional amendment next year, but said this session’s legislation would put the framework in place.

“It’s the greatest thing since sliced bread. What I really fear is going backward,” said State Treasurer John Schroder, who as chair of the Bond Commission already has held three meetings virtually. He points out that more people tune into the broadcast than attend the regular meetings. The commission decides loans for government projects, via the sale of bonds on Wall Street. Arguably, few rank-and-file citizens watch.

Democratic Alexandria Sen. Jay Luneau was troubled by the bill’s “difficult to hold a meeting” wording. He noted how difficult it is to drive to Baton Rouge from all over the state. “I don’t want to see us resorting to that for convenience’s sake,” he said.

“We can see how this is going to be beneficial,” state Sen. Gary Smith, D-Norco, said of SB466. “I just want to make sure that, just off of a whim, public bodies decide that this is our new way to meet; because it will make it difficult for the public to participate more than they do now when they can come to a meeting.”