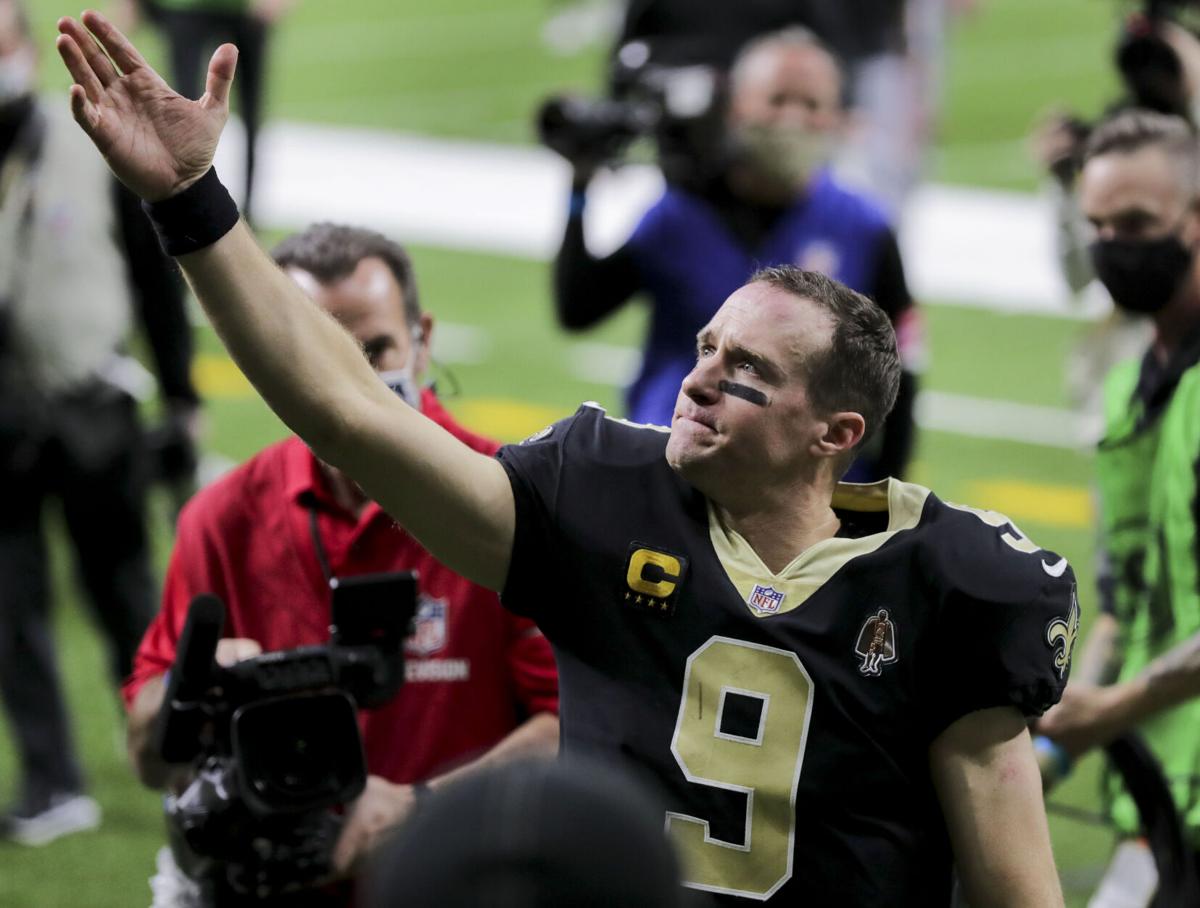 New Orleans Saints quarterback Drew Brees blows kisses to his wife and kids as he runs off the field after the 30-20 loss to the Tampa Bay Buccaneers. 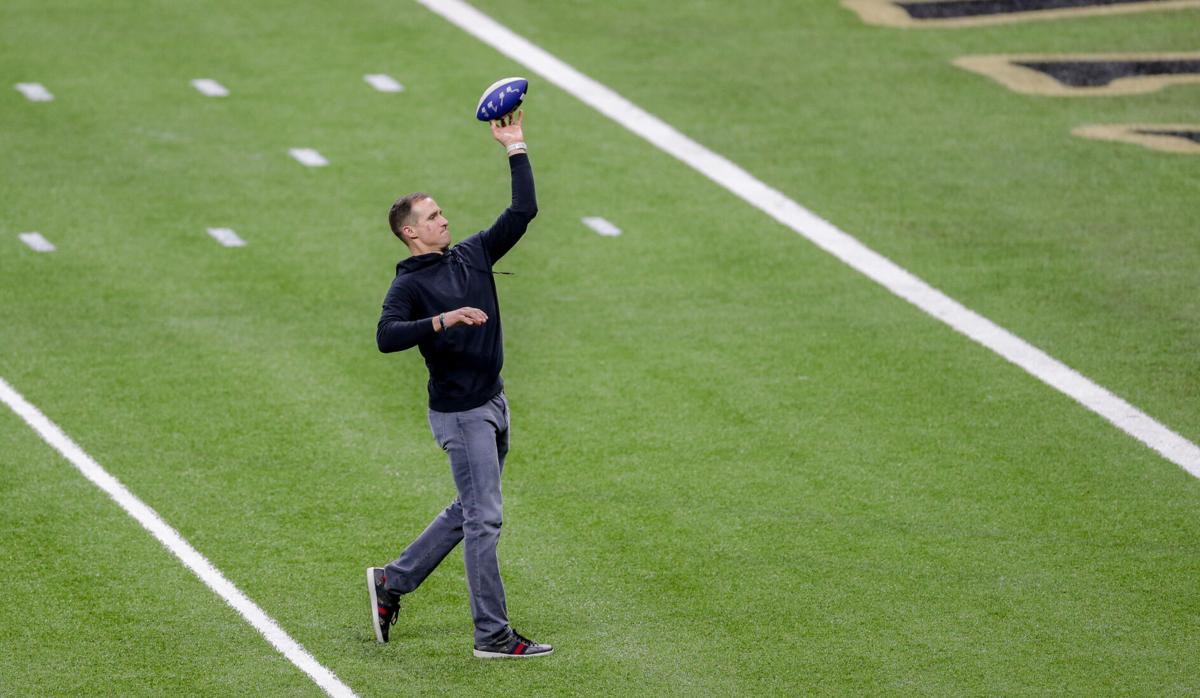 New Orleans Saints quarterback Drew Brees (9) throws a football to his boys after the game against the Tampa Bay Buccaneers at the Mercedes-Benz Superdome in New Orleans Sunday, Jan. 17, 2021. (Photo by David Grunfeld, NOLA.com | The Times-cases.Picayune | The New Orleans Advocate) 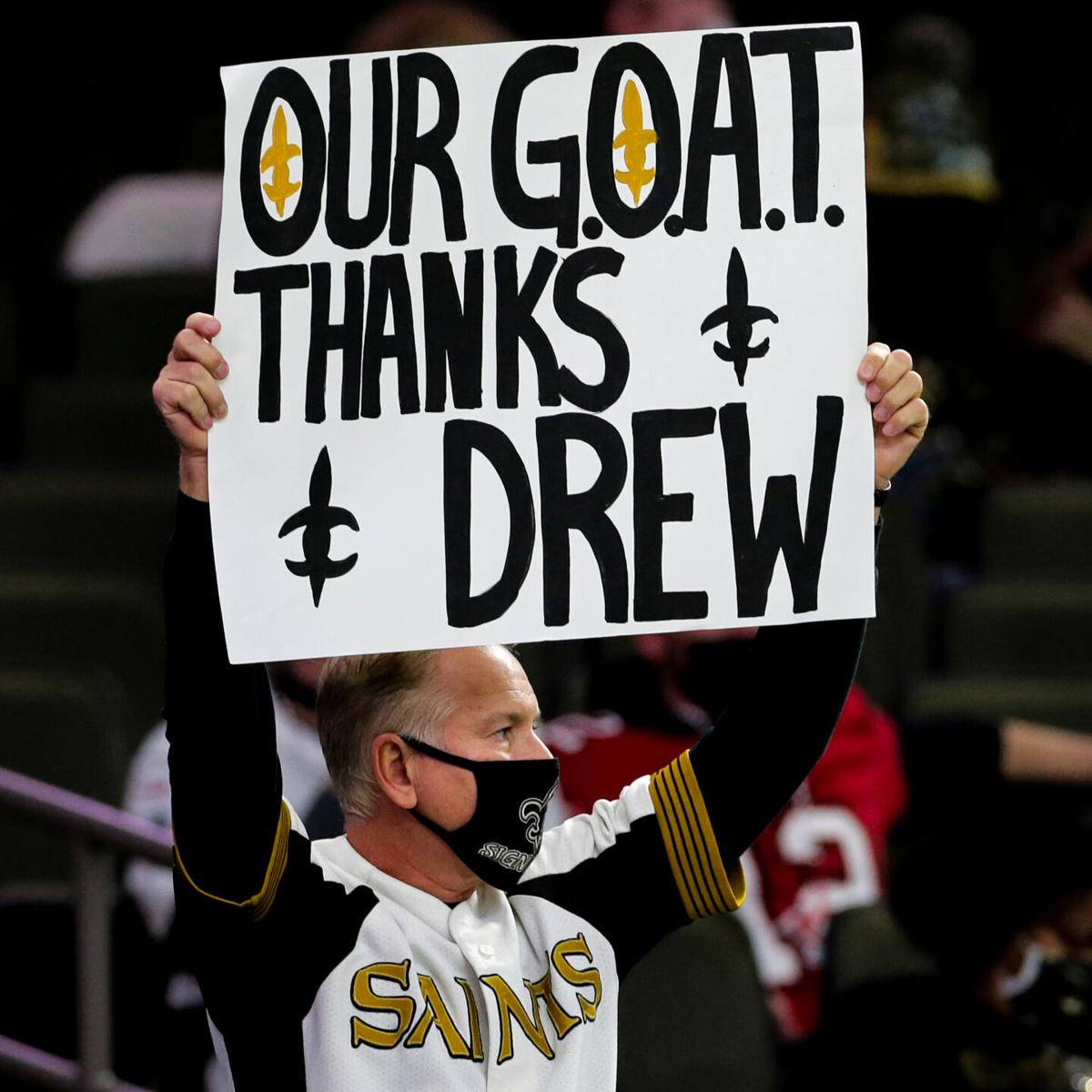 New Orleans Saints quarterback Drew Brees blows kisses to his wife and kids as he runs off the field after the 30-20 loss to the Tampa Bay Buccaneers.

New Orleans Saints quarterback Drew Brees (9) throws a football to his boys after the game against the Tampa Bay Buccaneers at the Mercedes-Benz Superdome in New Orleans Sunday, Jan. 17, 2021. (Photo by David Grunfeld, NOLA.com | The Times-cases.Picayune | The New Orleans Advocate)

That’s what everyone calls him. Not Drew Brees, although it’s hardly a mouthful, or Brees, according to the custom of referring to athletes by their last names. Just Drew. Like he’s someone we all know, even the vast majority of us who’ve never met him.

To an extraordinary extent, we do know him, because he shared with us not only his stellar skills and deep drive, but his heart, and his struggles. Fresh off a 2005 devastating shoulder injury that brought his time with the San Diego Chargers to a close, Brees came to a city broken by Hurricane Katrina to play in a stadium that had been ripped open by nature and made a symbol of despair by human ineptitude. Rather than being put off by the devastation, he felt a visceral kinship, rolled up his sleeves, and like everyone around him, got down to work.

What happened next, a spectacular 15-year run that ends with Brees’ retirement from the Saints, is much bigger than sports. It’s the tale of a quarterback and a community making a truly profound bond. Like New Orleans, Brees knew what it was to be dismissed as too small to be big league, too badly damaged to get another chance. He also knew what it was to hope and believe, and to prove the naysayers wrong.

When he rose to the highest heights, he took us there with him, through the emotional Monday Night Football reopening of the Superdome, to the exhilarating Super Bowl win 11 years ago, to a series of smashed individual career records more recently. There were epic disappointments, too, bad calls and game-ending blunders and missed chances for another shot at a ring. During his final playoff appearance against division rival Tampa Bay, Brees could no longer will his battered 42-year-old body to greatness. He is, after all, human.

And that’s really at the heart of the remarkable connection. Brees enjoyed the trappings of elite stardom, but he and his wife Brittany embraced their adopted community, and gave generously to it. He led by example, and on the rare occasions when his words landed wrong, he vowed to do better. If he ever pined for the greener pastures of a larger market, he never let on.

Brees didn’t get the full-throated tribute he deserved after his final game due to COVID-19; the Superdome faithful will surely get their chance once the pandemic is over.

Still, after the loss to the Bucs, he left fans with a parting image that encapsulated his tenure: Drew and Brittany playing with their four kids on an empty field in a quiet stadium, visiting briefly with victorious QB Tom Brady (who is somehow still going), taking his time and soaking it all in. There was no visible sadness on his face, just appreciation for all had happened, and everything it had meant.

To him. And to the fans who were lucky enough to accompany him on this unforgettable journey.