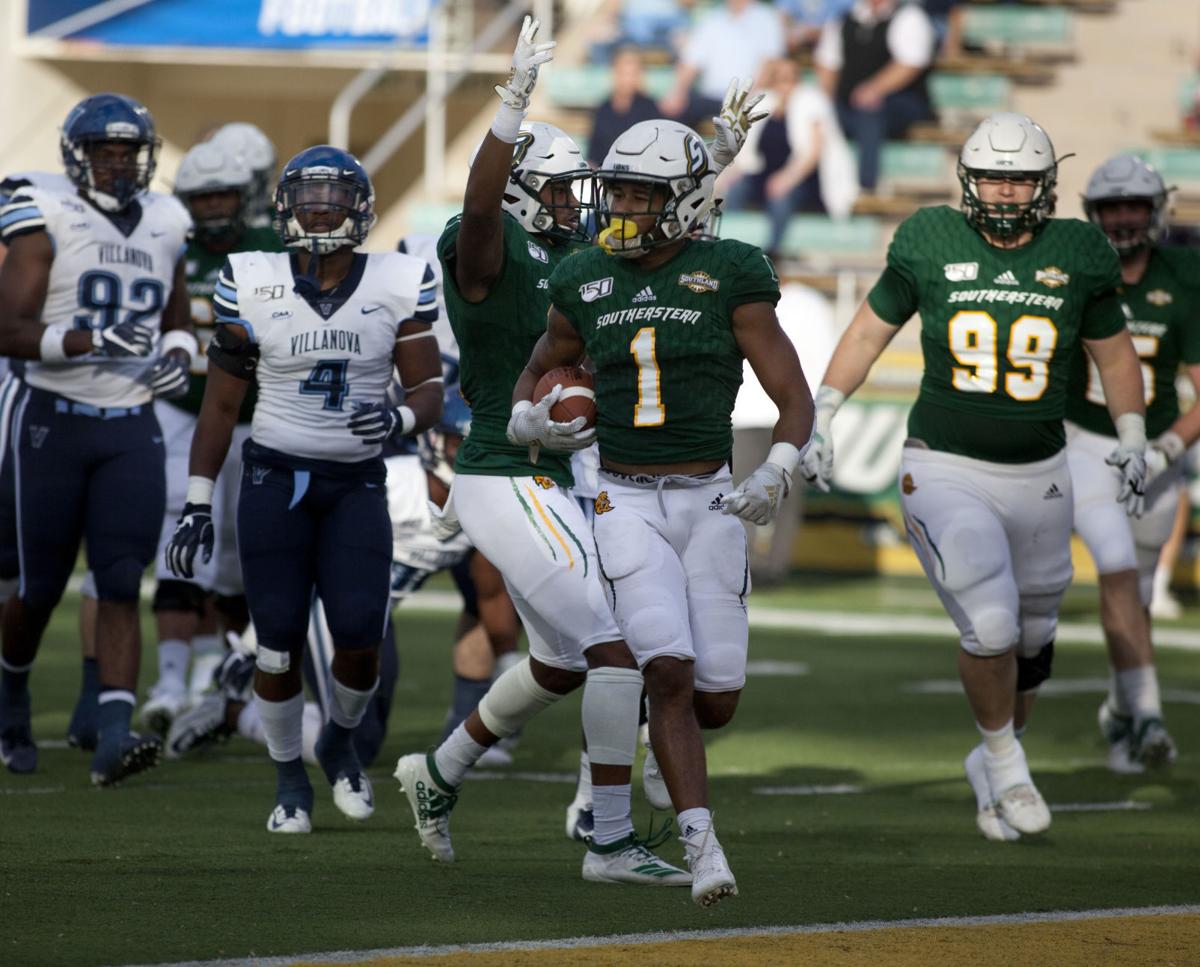 Photo provided by Randy Bergeron/SLU Sports Info - Southeastern running back Devonte Williams steps into the end zone in the first half against Villanova Saturday, Nov. 30, 2019 at Strawberry Stadium in Hammond. 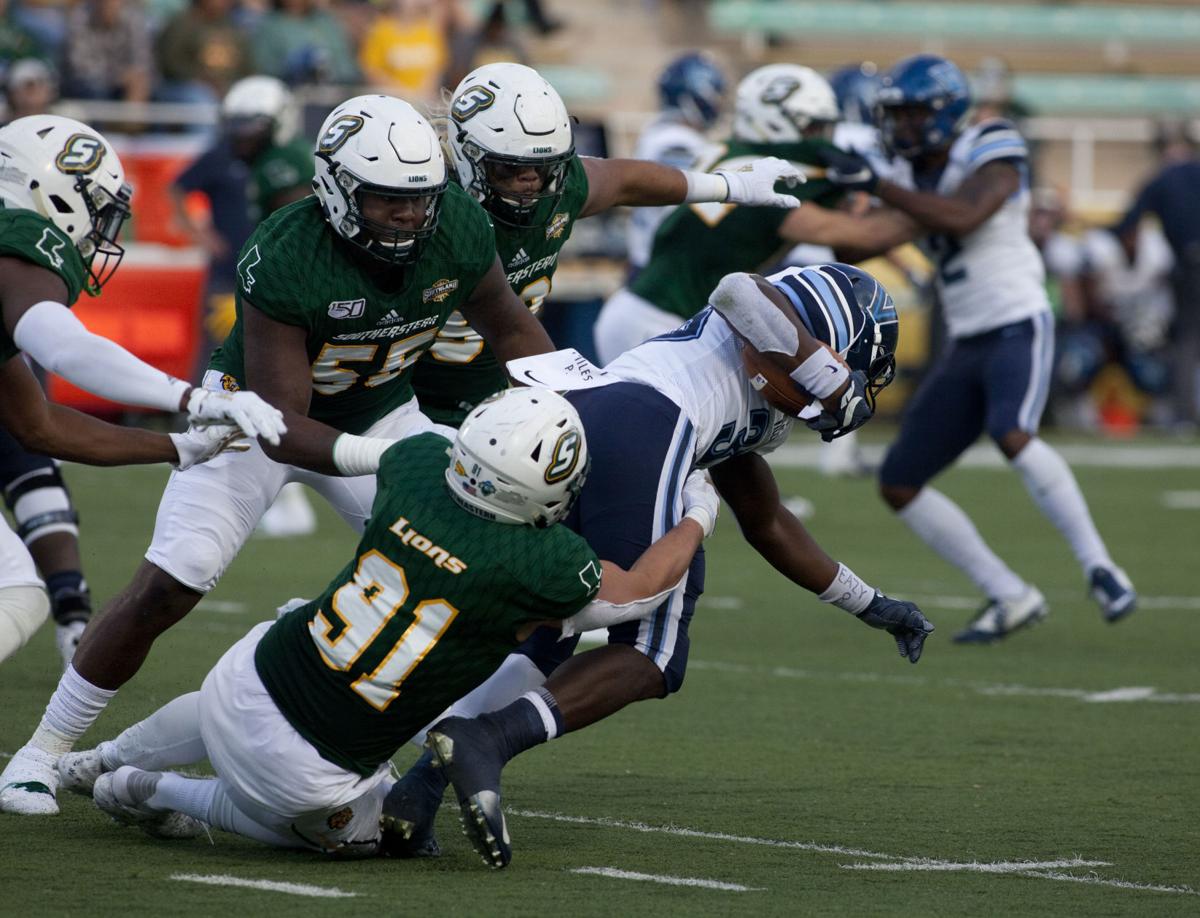 Photo provided by Randy Bergeron/SLU Sports Info -Southeastern defensive lineman Issac Adeyemi-Berglund brings down Villanova running back TD Ayo-Durojaiye in the first half Saturday, Nov. 30, 2019 in the first round of playoffs at Strawberry Stadium in Hammond. 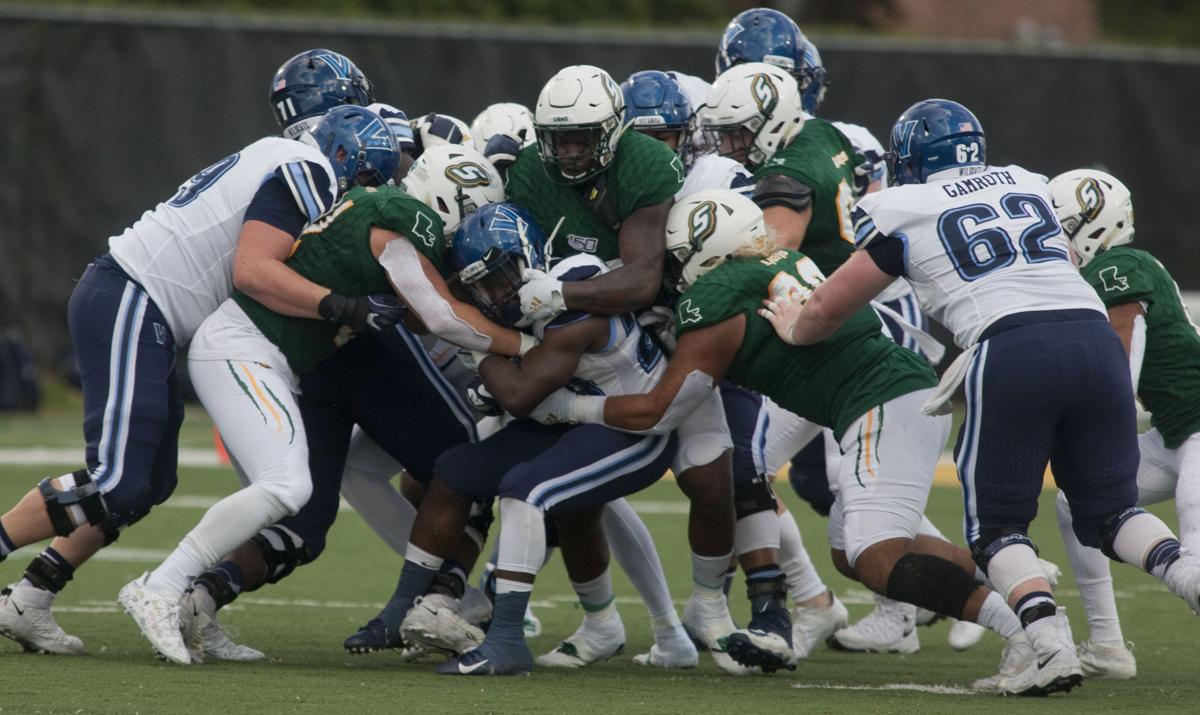 Photo provided by Randy Bergeron/SLU Sports Info -Southeastern defenders swarm Villanova running back DeeWil Barlee in the first half Saturday, Nov. 30, 2109 in the first round of playoffs at Strawberry Stadium in Hammond.

Photo provided by Randy Bergeron/SLU Sports Info - Southeastern running back Devonte Williams steps into the end zone in the first half against Villanova Saturday, Nov. 30, 2019 at Strawberry Stadium in Hammond.

Photo provided by Randy Bergeron/SLU Sports Info -Southeastern defensive lineman Issac Adeyemi-Berglund brings down Villanova running back TD Ayo-Durojaiye in the first half Saturday, Nov. 30, 2019 in the first round of playoffs at Strawberry Stadium in Hammond.

Photo provided by Randy Bergeron/SLU Sports Info -Southeastern defenders swarm Villanova running back DeeWil Barlee in the first half Saturday, Nov. 30, 2109 in the first round of playoffs at Strawberry Stadium in Hammond.

HAMMOND — They’ll talk about this one for a long time around here, not just the 4,173 who were actually in Strawberry Stadium Saturday, but those Southeastern Louisiana fans who wish they had been — or will maybe claim they were.

They’ll talk about how the Lions were down and seemingly on their way to being out at halftime of their FCS first-round playoff game against Villanova rallied to tie it in the third quarter, only to twice fall behind again in the fourth quarter.

And they’ll talk about how SLU drove to the Wildcats’ 8 in the closing minutes, when Chasson Virgil and CJ Turner connected on a tying fourth-down touchdown pass in which Turner was the fourth read.

And they’ll talk about how kicker Bryce Broussard, whose missed extra point in last week’s game against Nicholls State was the deciding margin in a defeat that cost the Lions a share of the Southland Conference championship, came through this time, giving the Lions a one-point edge — although the kick was tipped.

And they’ll talk about how, after a Villanova touchdown pass was negated by offensive pass interference, the visitors’ final pass from the Lions’ 39 fell incomplete, leaving Southeastern with a 45-44 victory and a trip to the second round next Saturday at sixth-seeded Montana.

“I heard it hit somebody’s hands,” Broussard said of his game-winner. “But I had the support of my entire team getting it over.

"It’s amazing. This team is a 60-minute team that will always fight to the end.”

The Lions, making their first playoff appearance since 2014, trailed 31-14 at halftime, giving up big plays by Villanova quarterback Daniel Smith, a 53-yard touchdown run and a 57-yard TD pass to Jaaron Hayek, plus a 78-interception return by Elijah Glover.

Villanova (9-4) did not punt in the first half and was getting the ball back to start the second.

“Nobody was down,” SLU coach Frank Scelfo said. “We just weren’t doing a good job on defense, especially against the run, and we weren’t capitalizing on our opportunities on offense.

“Those were the things we talked about. We said, ‘Stop the run’ and ‘Score touchdowns.’ ‘Do that, and we’ll be fine, which is exactly what happened.’ ”

The Lions did turn things around in the third quarter, forcing three straight punts, then converting them into touchdown drives of 90 and 85 yards plus a 25-yard field goal by Broussard for bring things to an improbable 31-31 tie heading into the fourth.

“We just came out and started executing on both sides of the ball,” said Virgil, who threw for a career-high 474 yards and three touchdowns. “The defense did a good job of kickstarting everything and getting us the ball back and we started making plays like we should on offense.”

SLU had the momentum, but Villanova was far from done.

The Wildcats drove 79 yards, and Smith's 1-yard TD toss to Todd Summers put them back in front.

SLU countered with Virgil’s 4-yard scoring pass to Turner to tie it again. But Villanova retook the lead with Smith’s 50-yard TD pass to Hodge with 4:36 left.

However, the Wildcats missed the PAT, leaving things open for a final scoring drive by SLU.

They got it on Virgil’s pass to Turner from the 8 and Broussard’s PAT with 1:45 left.

“I was pretty cool, calm and collected right there,” Virgil said. “We’ve had times this year when the game was on the line, but we failed.

“But those failures taught us to get to the point where it was time for us to get one.”

In a game with 89 points and 1,103 yards, there was plenty of time remaining — almost too much from SLU’s perspective.

Smith hit three straight passes to get Villanova to the Wildcats’ 40. His next pass went to Hayek in the end zone, but Hayek was called for pass interference against Xavier Lewis.

Pushed back its 45, Nova got back to the 39 in three plays forcing fourth down.

Wildcats coach Mark Ferrante said he did not believe kicker Drew Kresge, who had not attempted a field goal longer than 49 yards all season and who had just missed the PAT, could make a 56-yarder, so he went for a long completion to set up a shorter try if not another TD.

But the Lions got pressure on Smith and his final throw was incomplete, setting off a joyous SLU celebration.

“There were times in the game when we were juggling things around and not really sure where we were going,” said SLU senior linebacker Isaac Adeyemi-Berglund, who led the Lions with 11 tackles. “But we were due for this. When you see things all come together like this, it’s really beautiful.”

And now, SLU is bound for Missoula, Montana, where things in the Grizzlies’ outdoor stadium should be considerably cooler than the 82-degree weather Saturday’s game began in,

Adeyemi-Berglund, who is from Dartmouth, Nova Scotia, had some advice for his teammates who might not be as used to colder climes as he is: “Bundle up!”