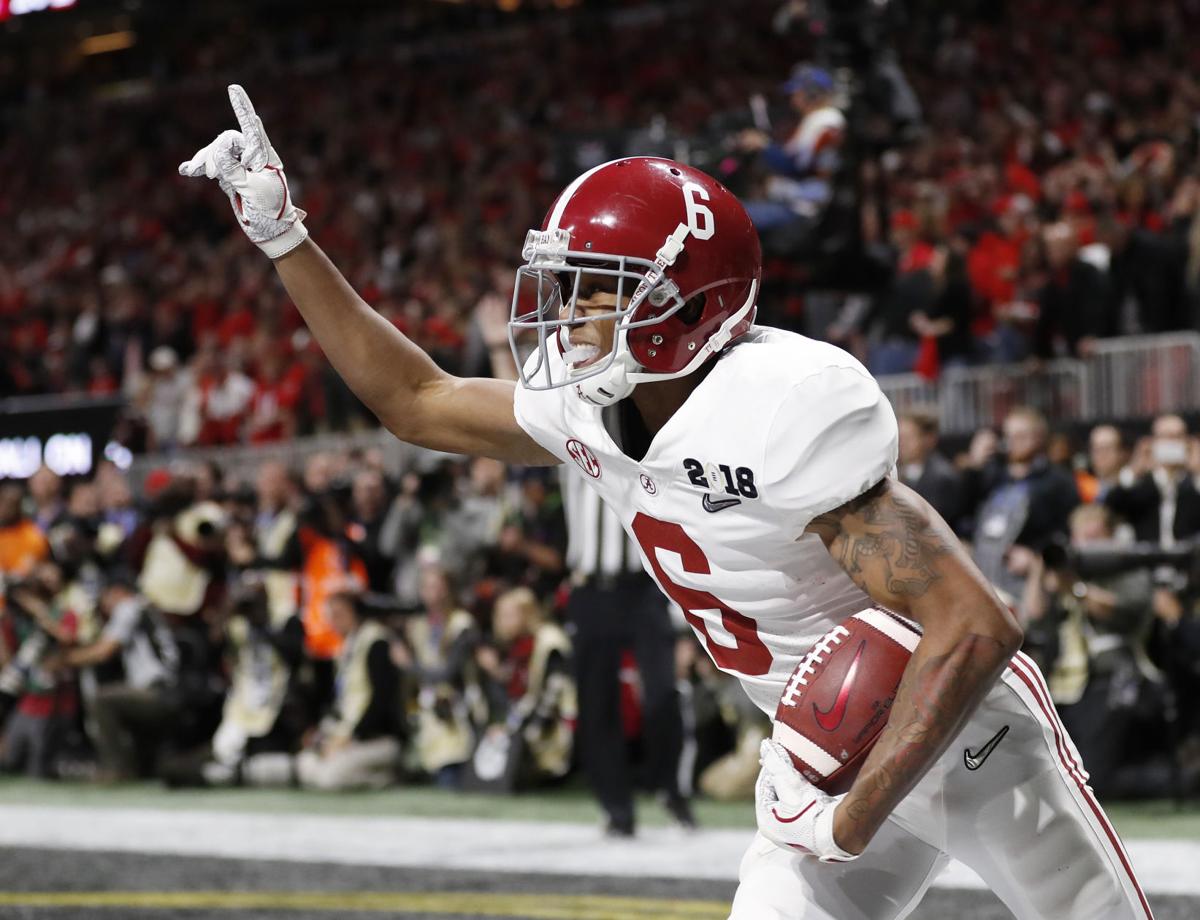 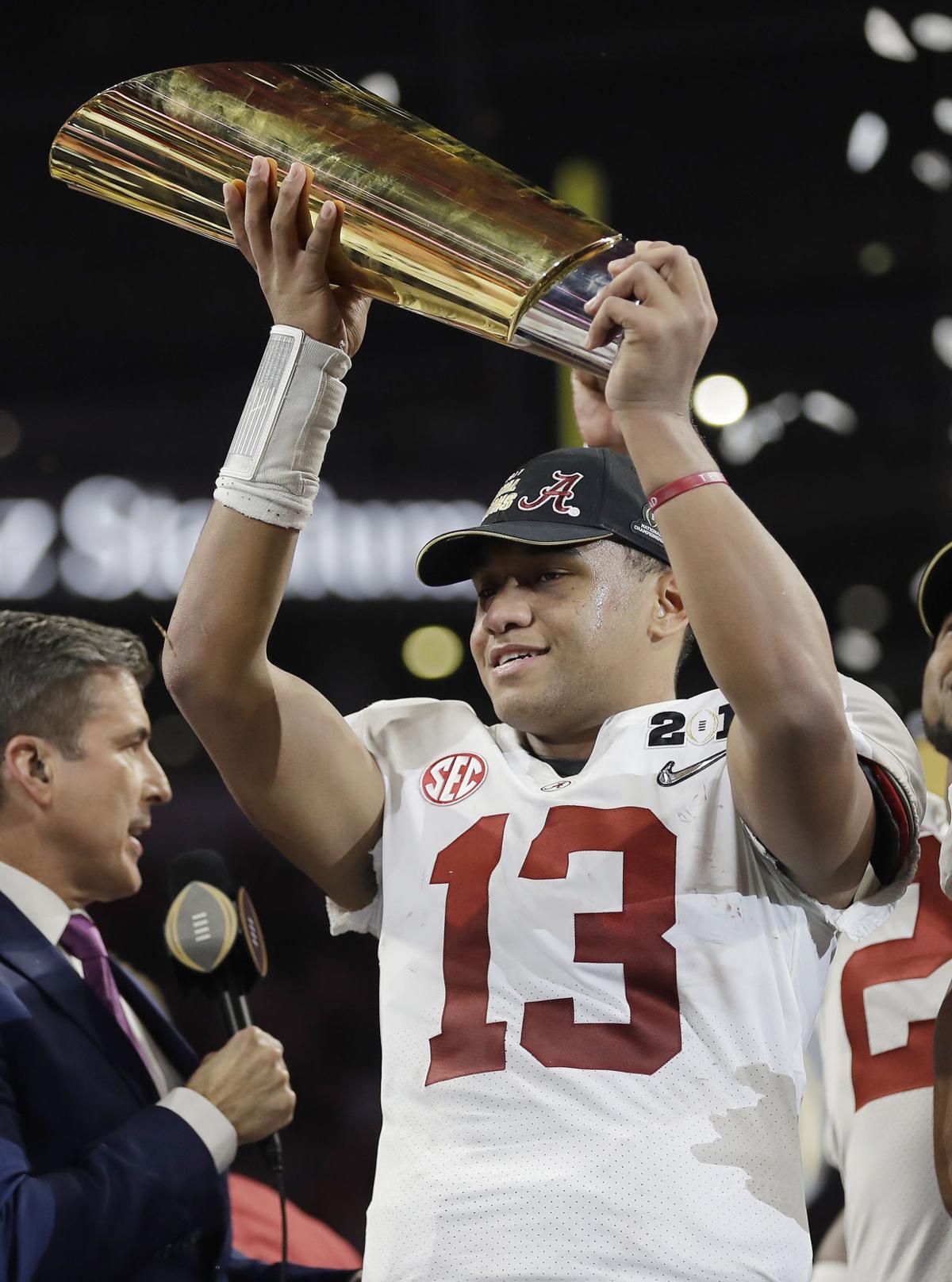 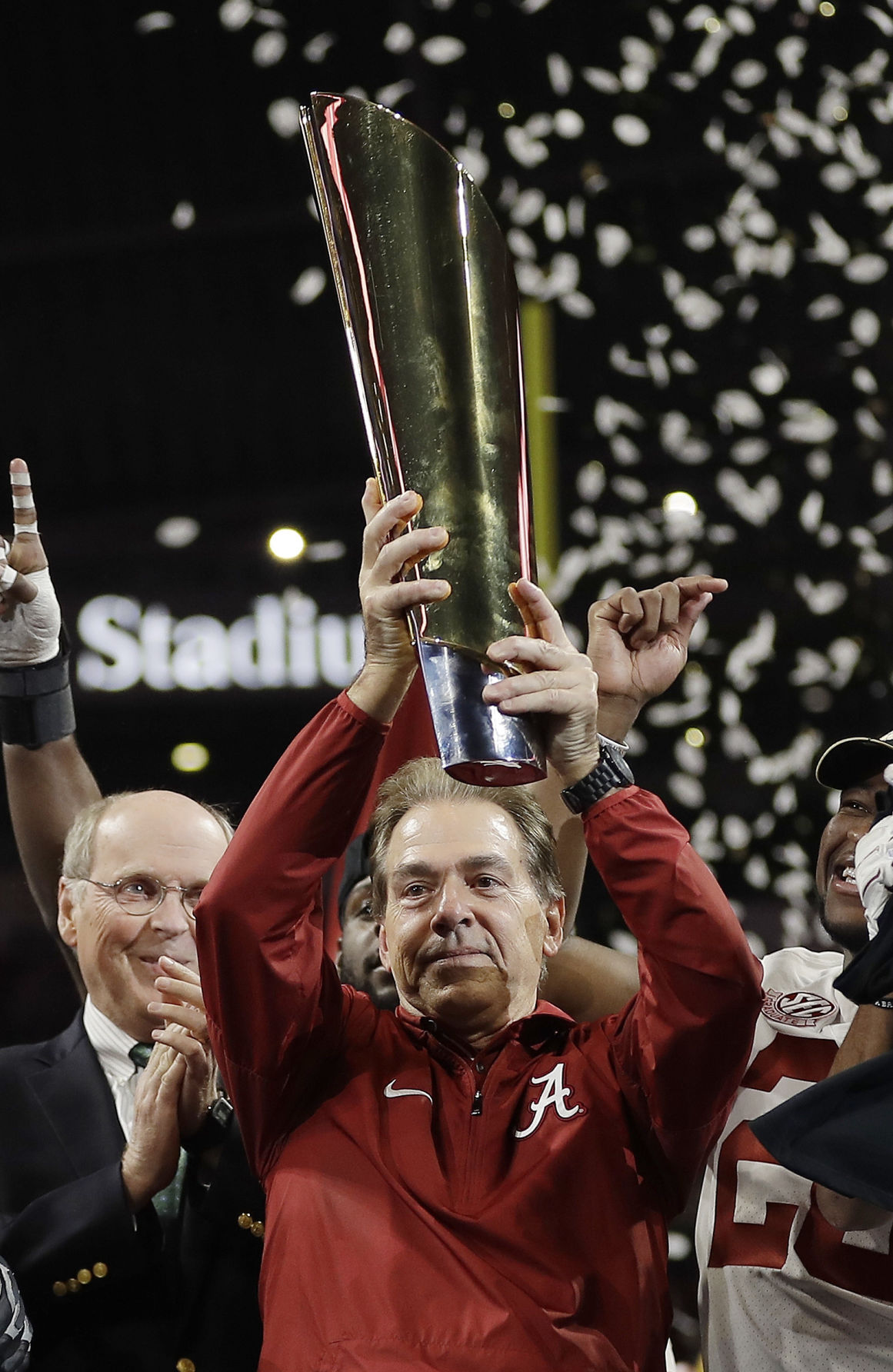 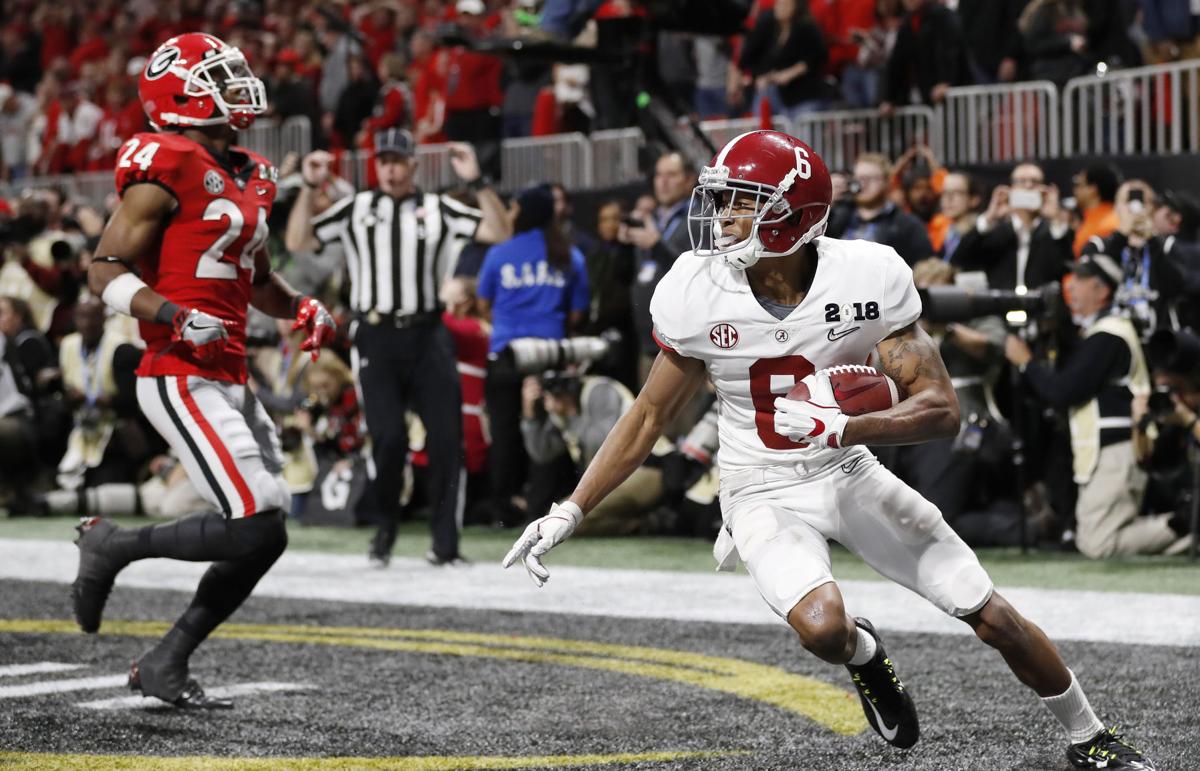 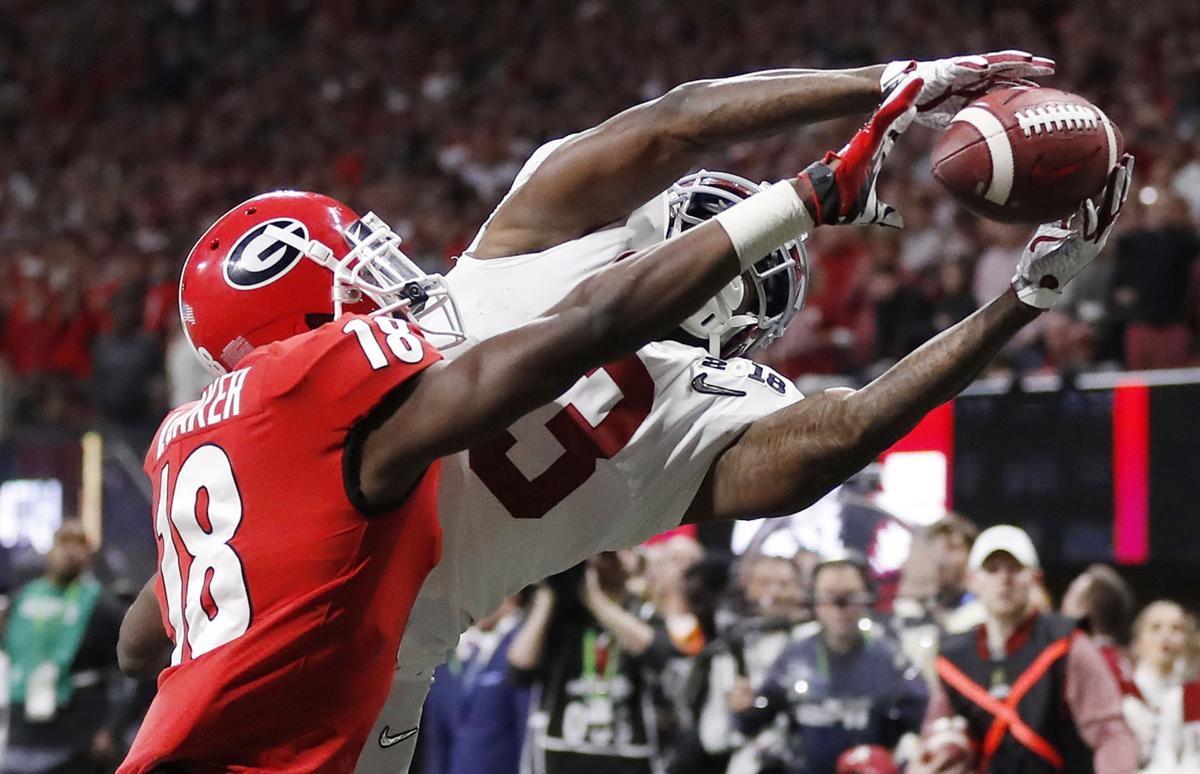 Georgia's Deandre Baker knocks the ball away from Alabama's Calvin Ridley during the second half of the NCAA college football playoff championship game Monday, Jan. 8, 2018, in Atlanta. (AP Photo/David Goldman) 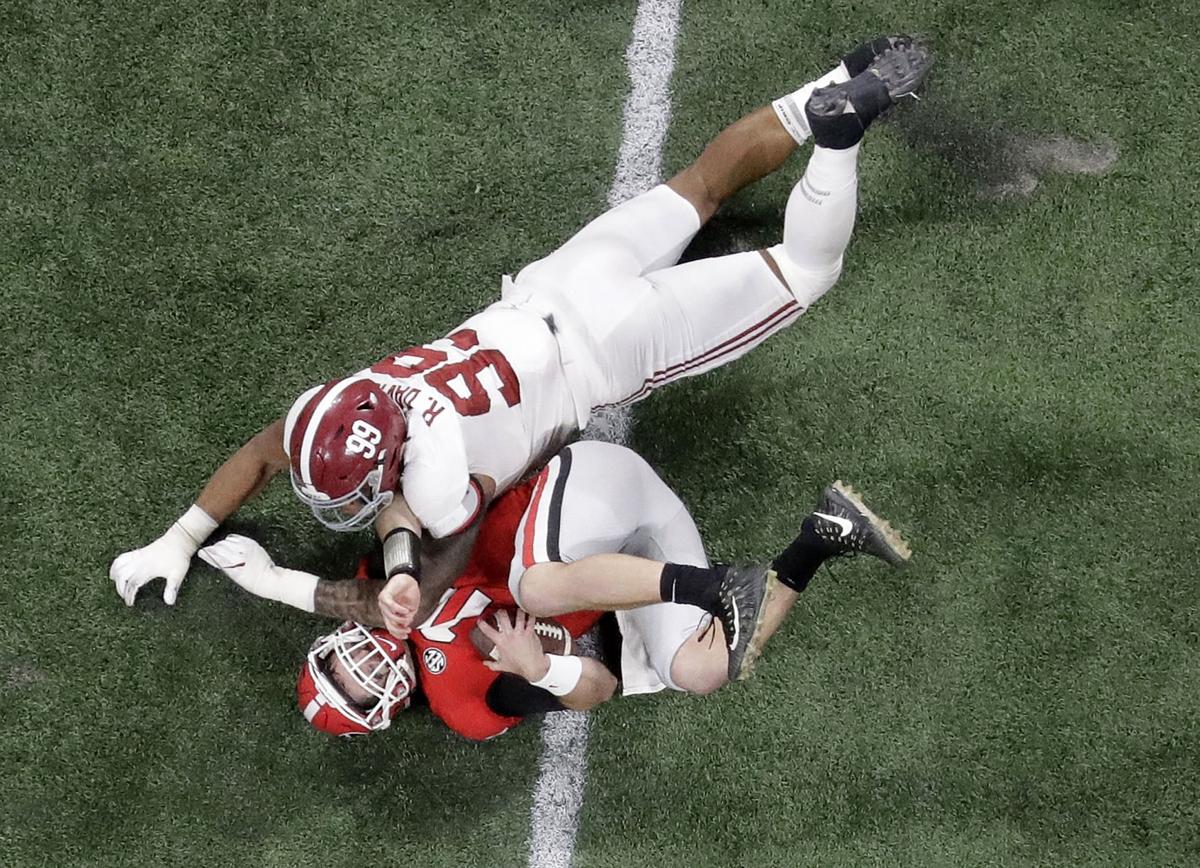 Georgia's Deandre Baker knocks the ball away from Alabama's Calvin Ridley during the second half of the NCAA college football playoff championship game Monday, Jan. 8, 2018, in Atlanta. (AP Photo/David Goldman)

ATLANTA (AP) — Tua Tagovailoa threw a 41-yard touchdown to DeVonta Smith to give No. 4 Alabama a 26-23 overtime victory against No. 3 Georgia to win the College Football Playoff national championship Monday night.

Tagovailoa entered the game at halftime, replacing a struggling Jalen Hurts, and threw three touchdown passes to give the Crimson Tide its fifth national championship since 2009 under coach Nick Saban.

"He just stepped in and did his thing," Hurts said. "He's built for stuff like this. I'm so happy for him." The Tide might have a quarterback controversy ahead, but first Alabama will celebrate another title.

For the third straight season, Alabama played a classic CFP final. The Tide split two with Clemson, losing last season on a touchdown with a second left.

What was Saban thinking as the winning pass soared this time?

Smith streaked into the end zone and moments later confetti rained and even Saban seemed almost giddy after watching maybe the most improbable victory of his unmatched career. A few hours later, Alabama was voted No. 1 in the final AP college football poll for the 11th time, three more than any other program.

For the fourth year in a row, The Advocate's Ross Dellenger is one of 60 national sports reporters voting in the Associated Press college foot…

After Alabama kicker Andy Pappanastos missed a 36-yard field goal that would have won it for the Tide (13-1) in the final seconds of regulation , Georgia (13-2) took the lead with a 51-yard field goal from Rodrigo Blankenship in overtime.

Tagovailoa took a terrible sack on Alabama's first play, losing 16 yards. On the next he found Smith, another freshman, and hit him in stride for the national championship.

Tagovailoa was brilliant at times, though he had a few freshman moments. He threw an interception when he tried to pass on a running play and all his receivers were blocking. He also darted away from pass rushers and made some impeccable throws, showing poise of a veteran. Facing fourth-and-goal from the 7, down seven, the left-hander moved to his left and zipped a pass through traffic that hit Calvin Ridley in the numbers for the tying score with 3:49 left in the fourth quarter.

He finished 14 for 24 for 166 yards. The winning play was, basically, four receivers going deep.

"After the sack, we just got up and took it to the next play," Tagovailoa said. "I looked back out, and he was wide open. Smitty was wide open." Freshmen were everywhere for the Alabama offense in the second half: Najee Harris at running back; Henry Ruggs III at receiver; Alex Leatherwood at left tackle after All-American Jonah Williams was hurt. It's a testament to the relentless machine Saban has built.

But this game will be remembered most for his decision to change quarterbacks trailing 13-0.

"I just thought we had to throw the ball, and I felt he could do it better, and he did," Saban said Tagovailoa. "He did a good job, made some plays in the passing game. Just a great win. I'm so happy for Alabama fans. Great for our players. Unbelievable."

With President Trump in attendance, the all-Southeastern Conference matchup was all Georgia in the first half before Saban pulled Hurts and the five-star recruit from Hawaii entered. The president watched the second half from Air Force One.

"I don't know how Coach Saban found me all the way in Hawaii from Alabama," Tagovailoa said. "Thank God he found me and we're here right now."

The Tide trailed 20-7 in the third quarter after Georgia's freshman quarterback, Jake Fromm, hit Mecole Hardman for an 80-yard touchdown pass that had the Georgia fans feeling good about ending a national title drought that dates back to 1980.

Rabalais: It's meltdown city for Georgia, and Alabama is there to scoop up another title

Fromm threw for 232 yards and for a while it looked as if he was going to be the freshman star of the game, the first to true freshman to lead his team to a national title season since Jamelle Holieway for Oklahoma in 1985.

"I mean, if you want to find out about Jake Fromm, go ask those guys on the other side of the ball, and they'll tell you because that's a really good defense he just went against," Georgia coach Smart said.

A little less than a year after the Atlanta Falcons blew a 25-point lead and lost in overtime to the New England Patriots in the Super Bowl, there was more pain for many of the local fans. Two years ago, Georgia brought in Smart, Saban's top lieutenant, to bring to his alma mater a dose of Alabama's Process.

Smart, who spent 11 seasons with Saban — eight as defensive coordinator in Tuscaloosa — quickly built 'Bama East. It was Georgia that won the SEC this season. Alabama had to slip into the playoff without even winning its division.

With the title game being played 70 miles from Georgia's campus in Athens, Dawgs fans packed Mercedes-Benz Stadium, but it turned out to be sweet home for Alabama. Now Saban is 12-0 against his former assistants.

But not without angst.

Alabama drove into the red zone in the final minute and Saban started playing for a winning field goal to end the game. A nervous quiet gripped the crowd of 77,430 as 'Bama burned the clock. With the ball spotted in the middle of the field, Pappanastos lined up for a kick to win the national championship. The snap and hold looked fine, but the kicked missed badly to the left.

For the second straight week, Georgia was going to overtime. The Bulldogs beat Oklahoma in a wild Rose Bowl in double overtime to get here, and after Jonathan Ledbetter and Davin Bellamy sacked Tagovailoa for a big loss on the first play, Alabama was in trouble — second-and-26.

Not for long. Tagovailoa looked off the safety and threw the biggest touchdown pass in the history of Alabama football.

The bitter taste of defeat in the College Football Playoff championship game in January didn’t stay with Jake Fromm all that long.