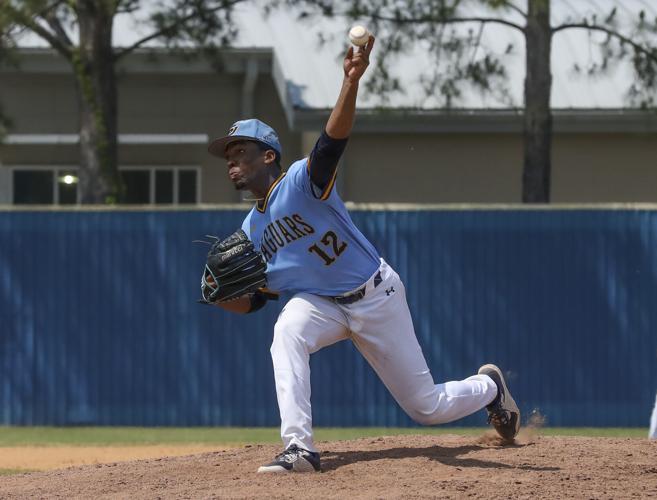 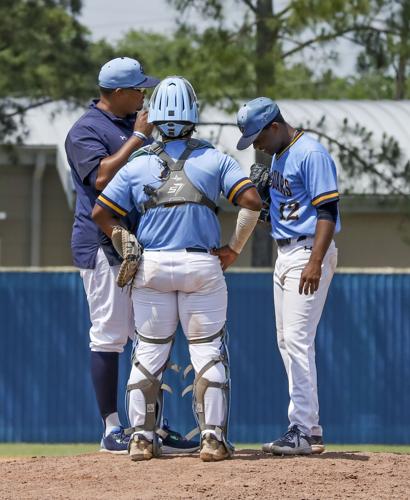 Southern University head coach Chris Crenshaw meets with pitcher Christian Davis (12) and catcher Taj Porter (2) during a meeting on the mound during a SWAC conference game against Prairie View at Lee-Hines Field in Baton Rouge, La., on Sunday, May 15, 2022. 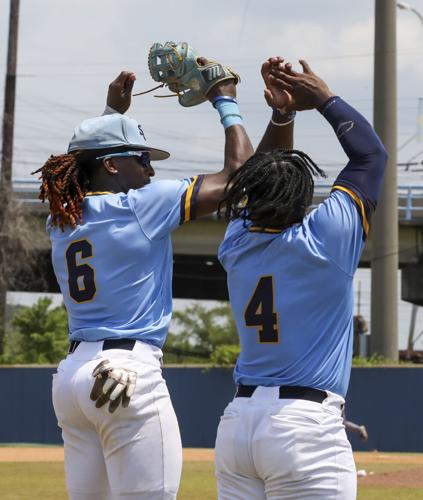 Southern University head coach Chris Crenshaw meets with pitcher Christian Davis (12) and catcher Taj Porter (2) during a meeting on the mound during a SWAC conference game against Prairie View at Lee-Hines Field in Baton Rouge, La., on Sunday, May 15, 2022.

By the time the Southern baseball team got to the second game of Sunday’s doubleheader, its third overall of the weekend, there was a wealth of pitching riches available.

In the first game, Southern needed just two pitchers as it clinched a Southwestern Athletic Conference series win with a 9-4 win over Prairie View. Southern used four hurlers in the nightcap, a 7-5 win that finished off a sweep of the Panthers.

“I still didn’t use all of the guys we normally use on Sunday,” Southern coach Chris Crenshaw said.

All three games combined, Southern limited Prairie View to 19 hits and 11 runs. The Jaguars pounded out 33 hits and scored 24 runs.

Southern hosts Alcorn State (2-35, 2-24) next week for its final SWAC series of the regular season.

“(The sweep) was big,” Crenshaw said. “When we started the year one of our goals was to win the West and right now it's sitting right there for us to go get it.”

Hunter Tabb’s bases-clearing double was the highlight of a four-run fourth that gave Southern a 5-2 lead. The Jaguars added two runs in the fifth, and used three pitchers to close out the game after starter Khristian Paul tired.

Nicholas Wilson came on in the ninth to shut the door, recording two strikeouts before getting a grounder to short to end the game.

“He’s been pitching as the set up man for our closer,” Crenshaw said of Wilson. “Today was his chance to close it out for us.”

At the plate, Tabb was Southern’s leading hitter for the day going a combined 6 for 7 with two doubles, three RBIs and three runs scored.

In the first game, Southern picked up where it left off on Saturday. The Jaguars got solid starting pitching from Christian Davis, and their offense kept the pressure on all game.

Davis was shaky to start the game, issuing four walks in the first three innings. He stayed out of big trouble by keeping Prairie View from coming up with key hits.

The Panthers had runners in scoring position in three of the first six innings, but came up with only one run. That run came across in the third when Demarie Smith walked and later scored on a throwing error.

Southern put up runs in three of the first four innings to take control.

Tremaine Spears and Michael Laulas each had RBI hits in the first inning. After picking up a run in the third, Southern added three runs in the fourth. O’Neill Burgos’ two-run single was the big blow.

Southern finished with 14 hits including five doubles. Burgos was 3 for 3 with two doubles while Hunter Tabb went 4 for 4 with a double.

Four weeks ago, Southern looked like a scuffling baseball team. The Jaguars were five games behind first place Prairie and looking like they w…