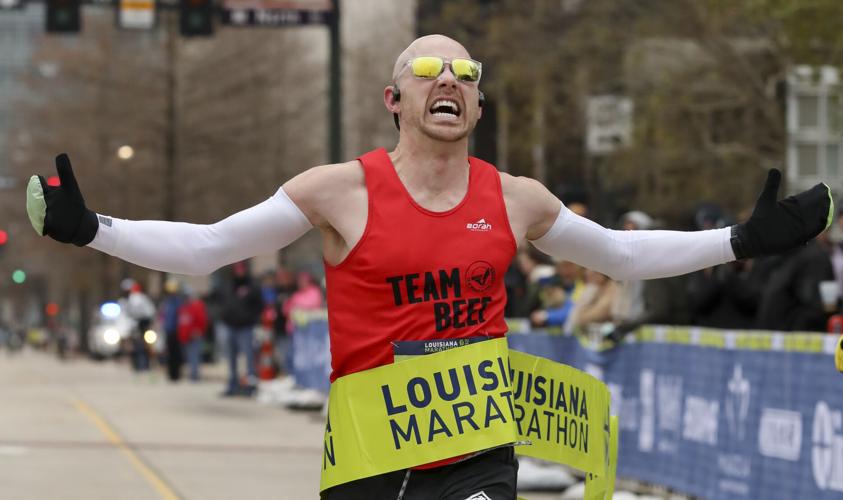 Chris Free of Virginia Beach, Virginia, celebrates as he crosses the finish line to win the Louisiana Marathon in downtown Baton Rouge, La., on Sunday, January 16, 2022. 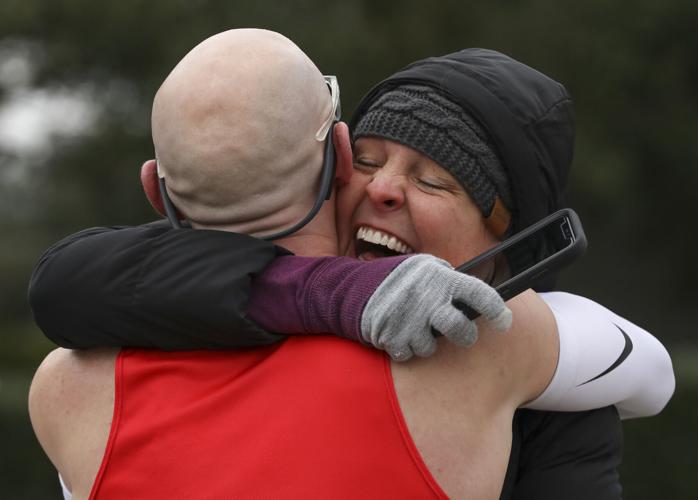 Chris Free of Virginia Beach, Virginia, celebrates as he crosses the finish line to win the Louisiana Marathon in downtown Baton Rouge, La., on Sunday, January 16, 2022.

The announcer of the Louisiana Marathon said that the leaders had begun mile 24, and Jenna Free glanced up at the clock over the finish line. It was a cold Sunday morning in downtown Baton Rouge, and the wind blew in Free’s face as she did some backwards math. She got excited: If her husband, Christopher Free, had met his goal, he’d be near the front of the pack.

Sure enough, Christopher, 36, broke through the tape about 12 minutes later, finishing first in the Louisiana Marathon’s 11th running. He completed the 26.2 mile race in two hours and 38 minutes, shattering his previous personal best by six minutes. This was his 15th marathon run, and first marathon win.

When he learned his time, Christopher shook his head and smiled.

Christopher grew up in Chillicothe, Ohio, and he and Jenna live in Virginia Beach, Virginia. He’s the director of education and communications at the Joshua Fund, “a nonprofit educational and charitable organization that works closely with Jewish and Christian allies in Israel and the Middle East.”

Christopher almost missed out on running the marathon. He was originally signed up to run the Jekyll Island race in Georgia, but a storm on the East Coast canceled the event only a few days before it was scheduled. Christopher and Jenna scrambled. They called their hotel, shifted their reservations to Baton Rouge and hopped on a flight to Louisiana. Christopher had to race.

“I knew I may not ever get this fit ever again in my life,” he said, “so I wanted to get a race.”

A few days later, Christopher posed triumphant, arms wide at the foot of the Louisiana State Capitol Building, an unlikely place for the highlight of his career, itself an unlikely journey that began on a hill in Athens, Ohio.

How did Christopher begin running? His story is unconventional.

Jenna, his now wife, was a “gifted” runner in high school. She continued running in college, where she met Christopher. The two began to date, but as Christopher puts it, “(Jenna) then decided that she didn’t have time for me.”

“I realized that she went out running for about an hour every day,” Christopher said, “and I decided I was gonna be a runner so I could get some time with her.”

Soon, Christopher ran up that hill with Jenna — “a weak little hill” — and his lungs were burning. He felt like he would vomit. But soon, after a few more runs, Christopher’s stamina improved, and he and Jenna were running races together. Sixteen years and two children later, they haven’t stopped.

Christopher even has a coach, 2020 Olympic Trials qualifier Dylan Belles. He credits Belles with his development of multiple “gears” — Christopher said he used to have one, slow, steady pace; now he knows when to increase his speed and tempo. That adjustment helped him win the Louisiana Marathon.

Jenna stood as a spectator behind the barricades along the route. After all those runs with her husband, she sensed that he was in the lead — from two miles away.

After Christopher crossed the finish line, Jenna squealed in excitement. The two met for a warm embrace after a cold, windy run.

“We’re at our best when we’re running together,” Christopher said. “It feels like everything’s right in the world.”