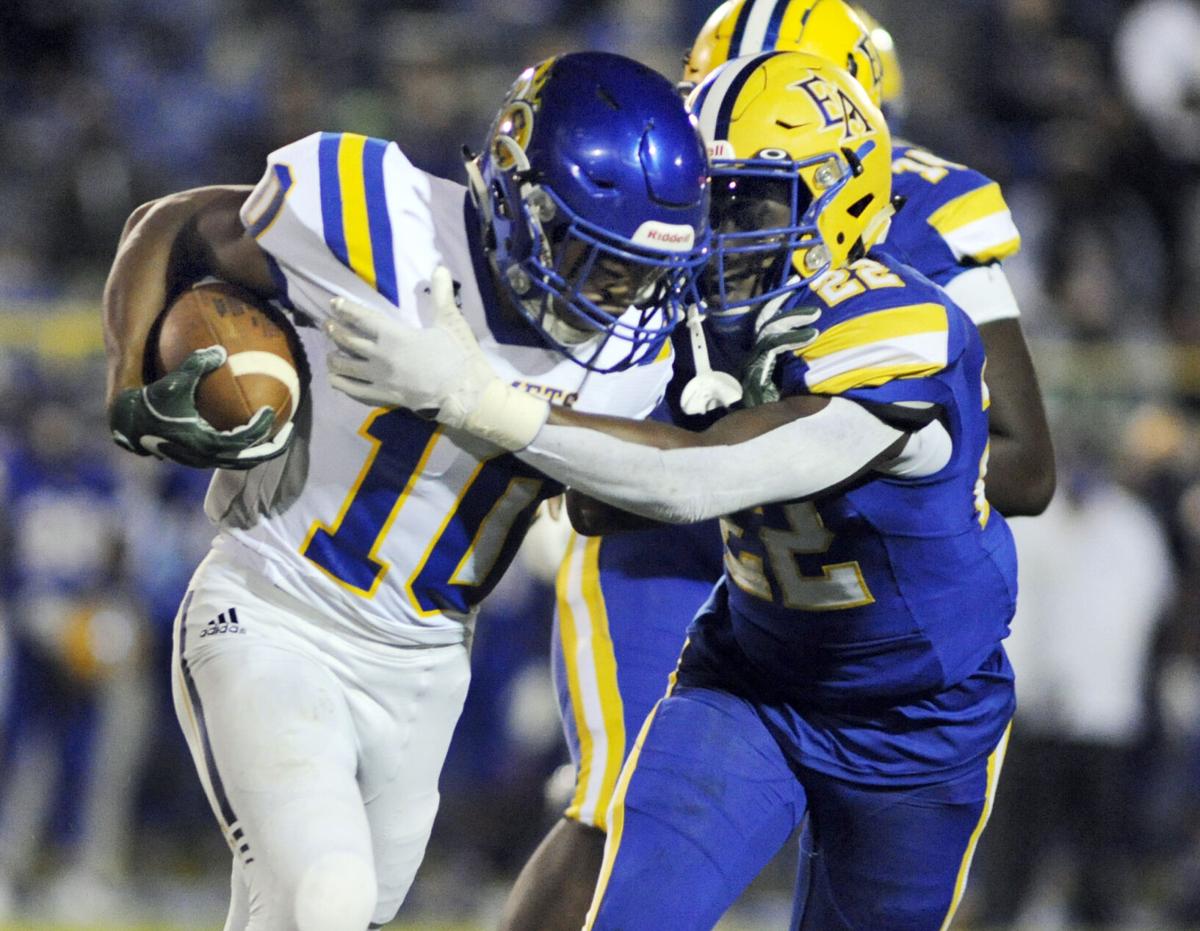 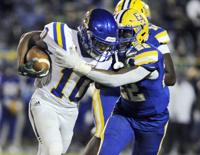 St. Charles Catholic's Mandel Eugene is tackled by East Ascension's Walter Samuel as he returns an interception against the Spartans on Friday night at East Ascension. 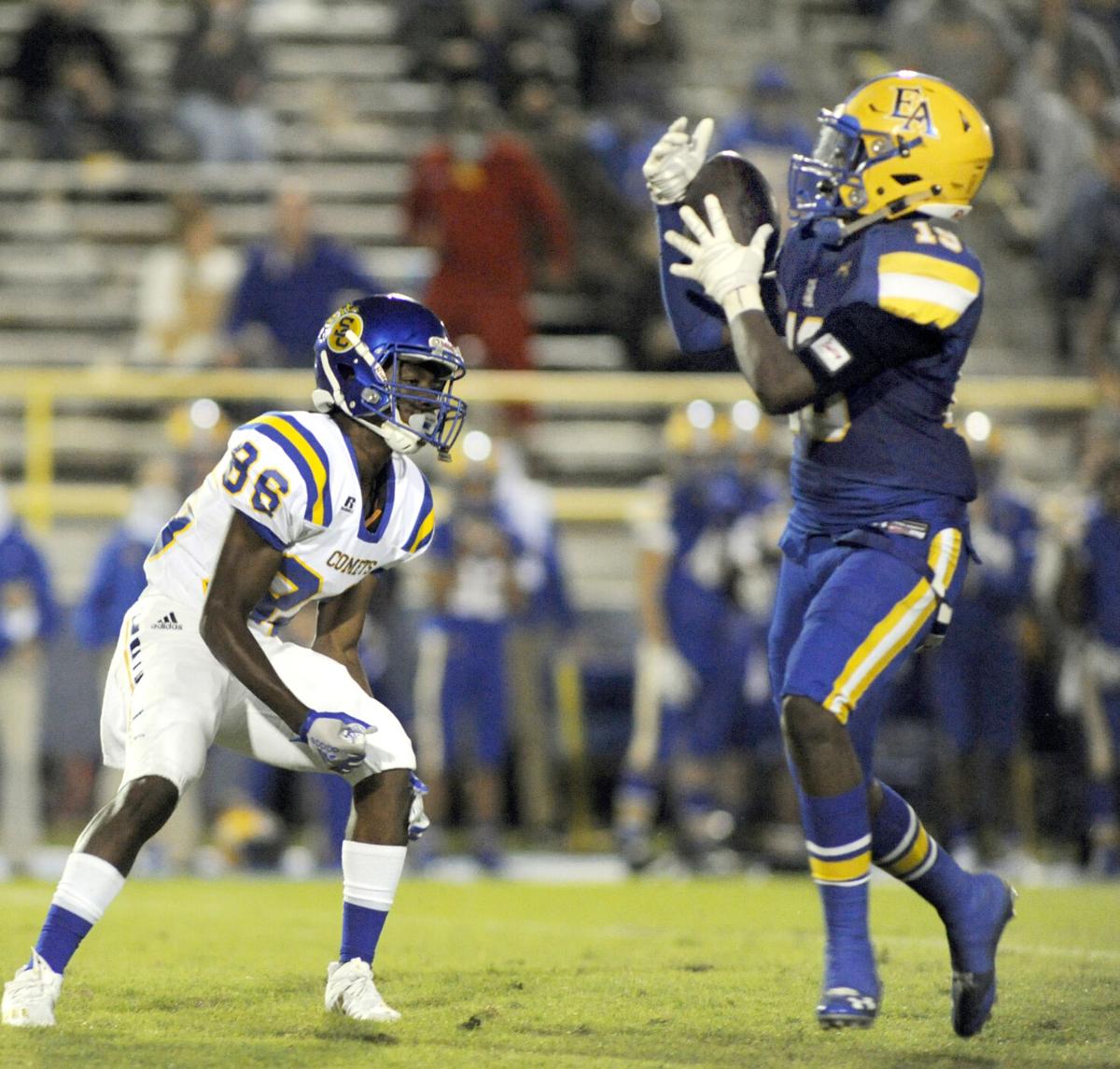 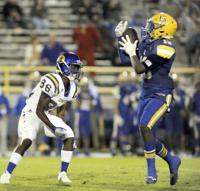 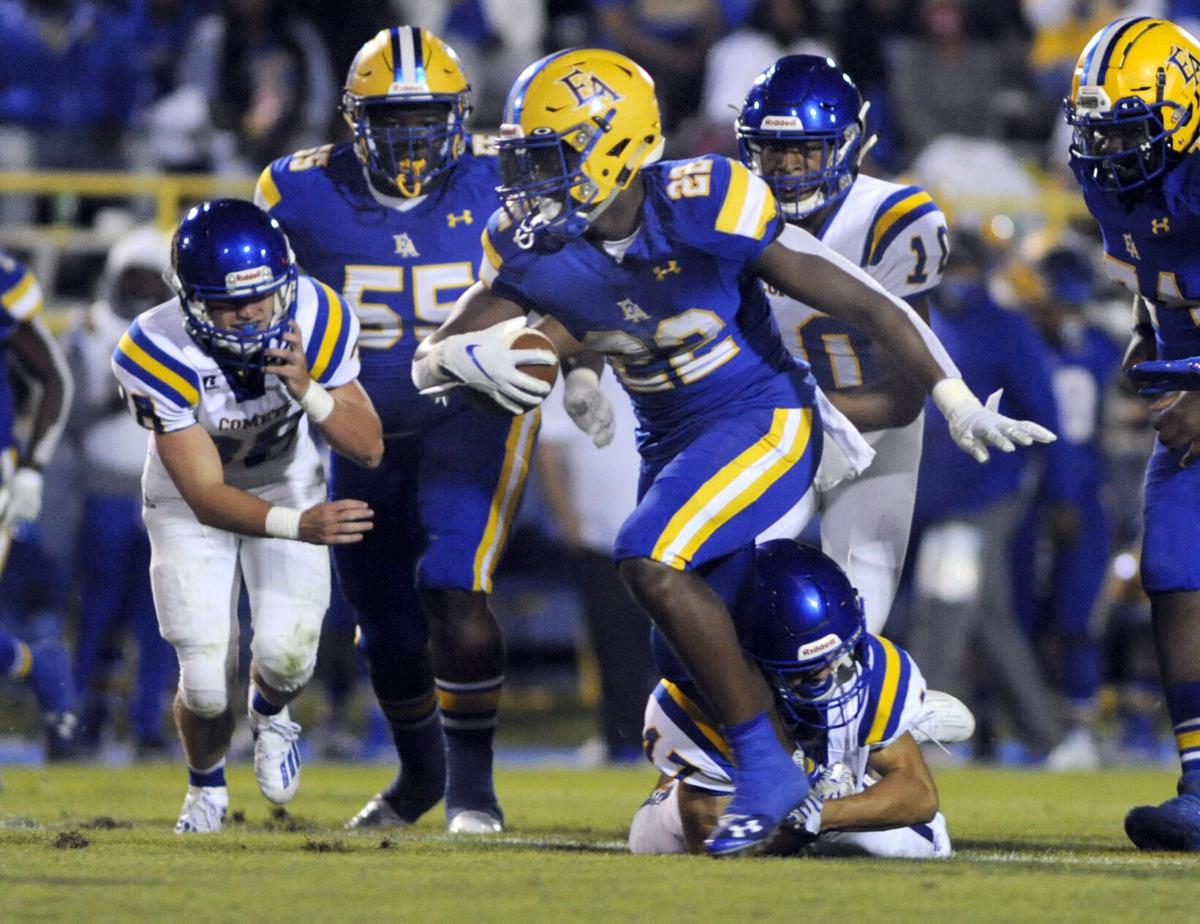 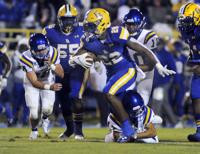 East Ascension's Walter Samuel breaks away for a nice run up the middle against St. Charles Catholic on Friday night at East Ascension.

St. Charles Catholic's Mandel Eugene is tackled by East Ascension's Walter Samuel as he returns an interception against the Spartans on Friday night at East Ascension.

East Ascension's Walter Samuel breaks away for a nice run up the middle against St. Charles Catholic on Friday night at East Ascension.

GONZALES —  St. Charles defensive back Regdrick Hackett returned an interception 99 yards for a touchdown with 39 seconds left and the Comets held off one final push to claim a 17-9 victory against East Ascension on Friday at Spartan Stadium.

A 47-yard completion from EA’s Kullen Wheat to Navell Chopin with 23 seconds left gave the home team a chance to score and tie the game with a two-point conversion. But Wheat’s short, desperation pass was caught by Kael Babin for a yard gain and time ran out before the Spartans could get off another snap.

Comets quarterback Zack Vicknair rushed for 140 yards on 16 carries, including a 75-yard run on the first play of the second half to break a scoreless tie. Carter Chauvin kicked a 32-yard field goal to make it 10-0 early in the fourth quarter.

Wheat came off the bench to complete 8 of 10 passes for 127 yards, including a 14-yard TD throw to Chopin. Jaquel Mack caught six passes for 87 yards and Walter Samuels had 68 yards rushing on 11 tries.

After Wheat’s TD pass cut the lead to 10-7, the Comets found themselves backed up deep in their territory. On fourth down from the 10, coach Frank Monica elected to surrender an intentional safety to free kick from the 20.

Kael Babin’s 29-yard free kick return put the ball at the SCC 42 with 2:07 left. Wheat then hit Mack with a 23-yard pass for a first down at the 14. With 56 seconds left, Wheat tried an alley oop pass to Jordan Goodlow, but Hackett stepped in front of it and ran for the clinching score.

The Comets also had an interception and fumble recovery in the first half and had a goal-line stand with EA having the ball first-and-goal at the 5. The Spartans’ Logan Kern missed a 19-yard field goal attempt at the end of that drive.

Vicknair had a tough night throwing with three interceptions but was the only consistent offensive threat on quarterback keepers and scrambles. He broke several tackles and made a good fake and a good cut on his touchdown run. The last player with a shot was EA’s Kendrick Broussard at midfield.

Vicknair also helped avert disaster by recovering two errant center snaps that went over his head and ran seven times for 30 yards on the drive that led to Chauvin’s field goal and a 10-0 lead. EA held SCC’s leading rusher Keenan Gauff to 13 yards on 17 carries.

Frank Monica, St. Charles coach: “We knew we were outmanned and running the football would be a chore. I told the kids when the game was 10-0 it was not over. We were resilient.”

Darnell Lee, East Ascension: “We hung in there and gave ourselves a chance to win but I blew it. We were in position for the field goal (down 10-9 before interception). I thought we’d take a quick shot thinking it would be incomplete, stop the clock and kick the field goal. We started slow but they had a lot to do with that.”

The Comets had their streak of scoreless quarters snapped at 11 after shutting out their first two foes.