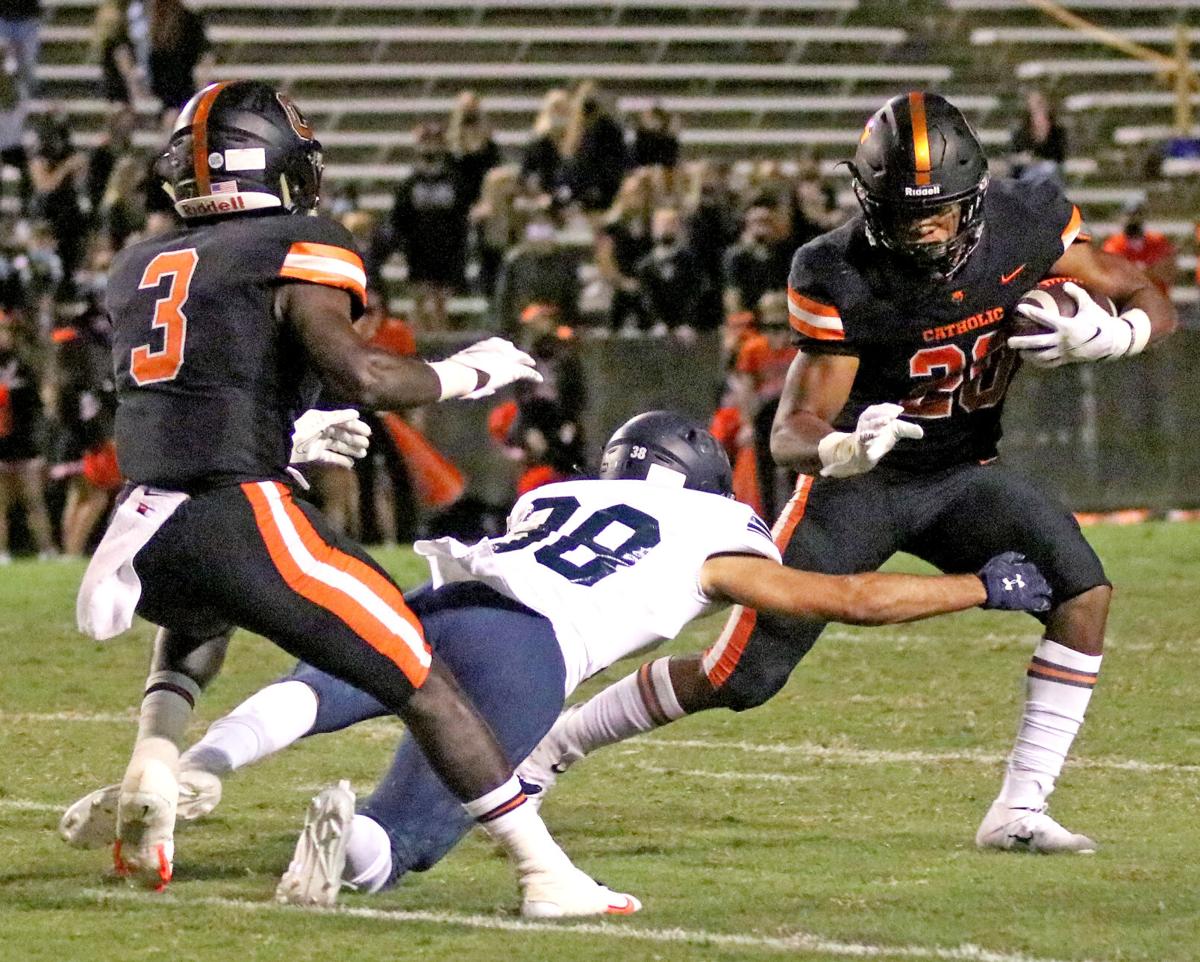 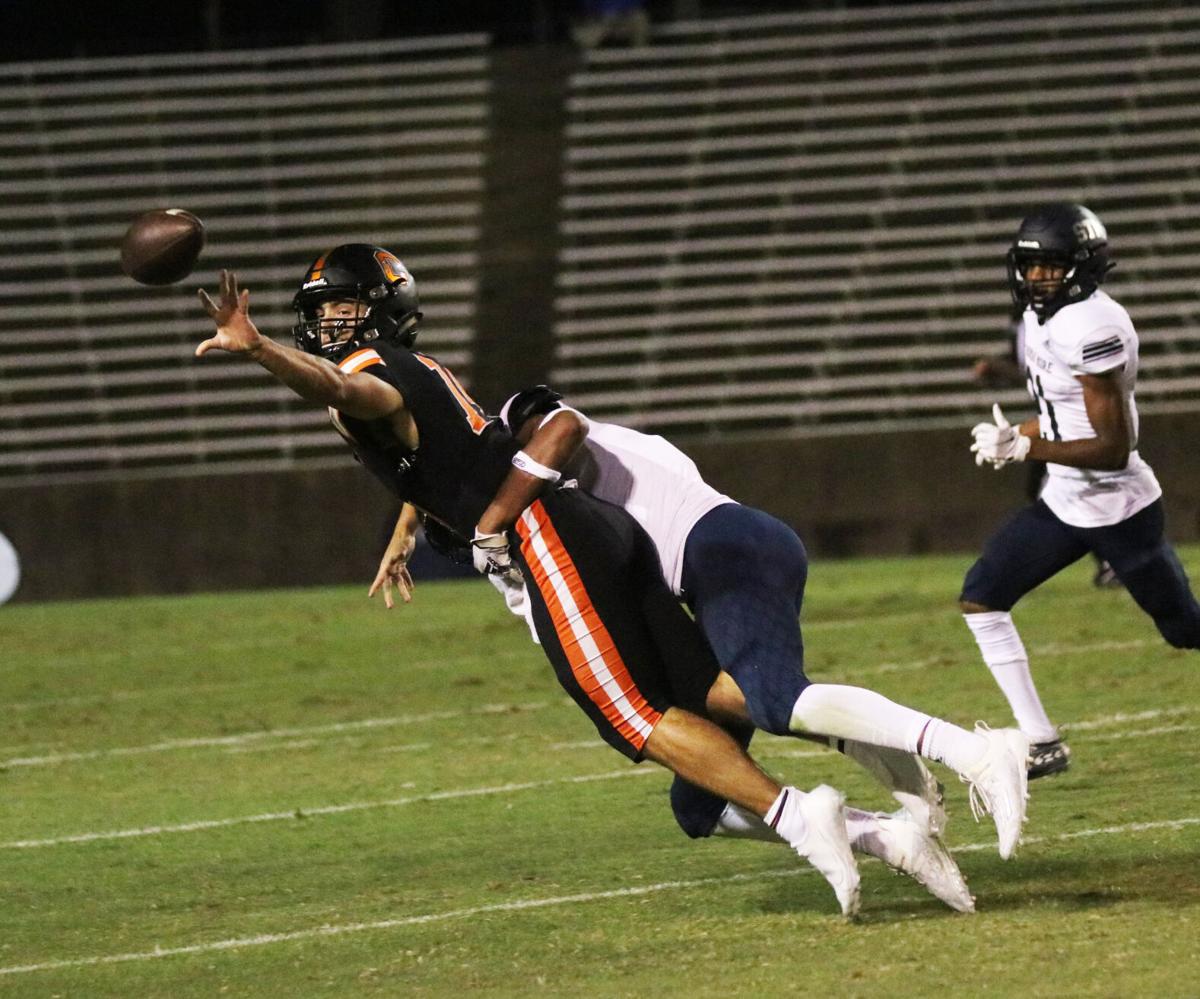 Catholic’s quarterback Landon O’Connor passes the ball as St. Thomas More’s Nicholas Beckwith brings him down during the match up held at Memorial Stadium on Friday. 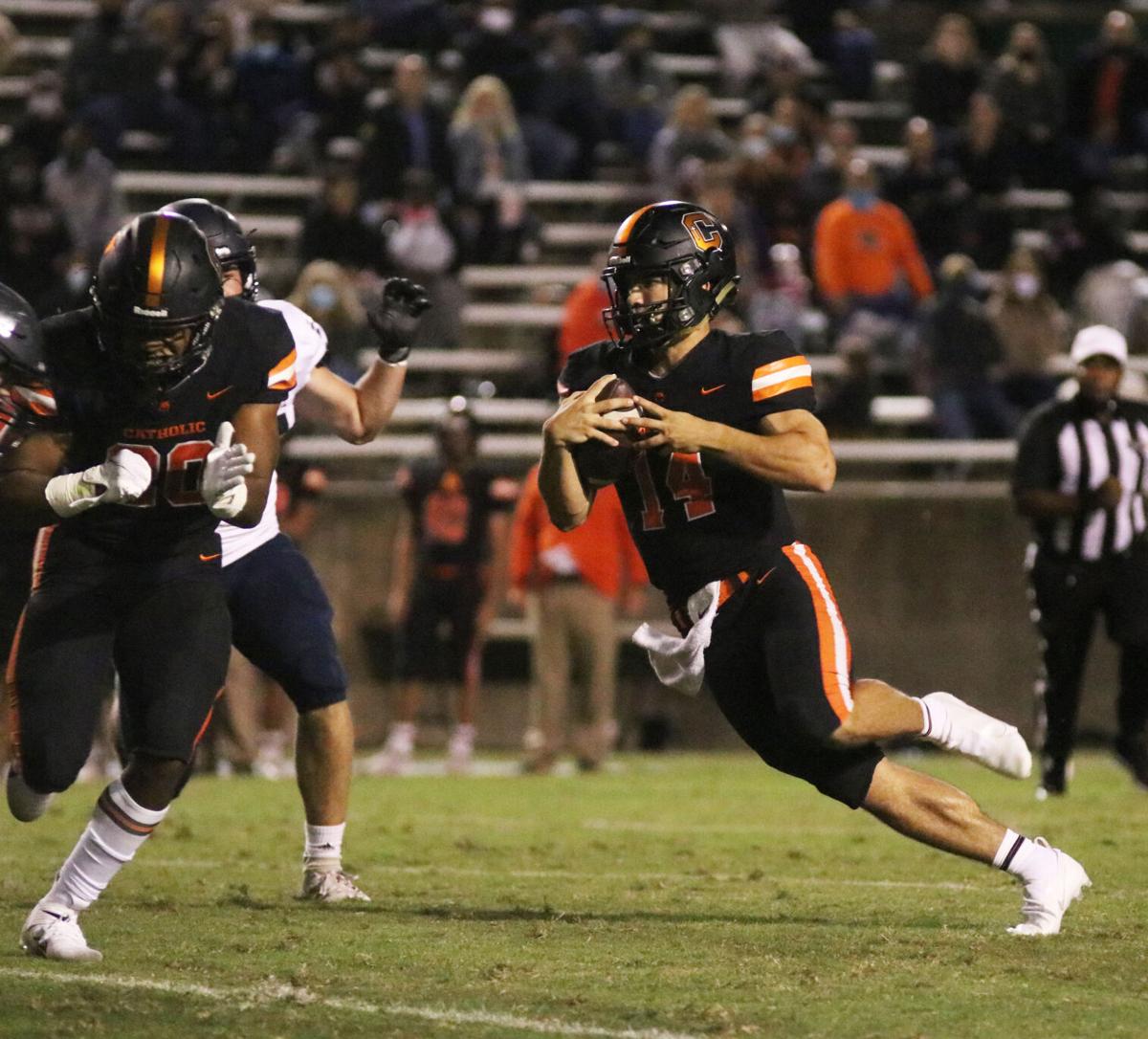 Catholic’s quarterback Landon O’Connor runs the ball on a quarterback keep against St. Thomas More during the match up held at Memorial Stadium on Friday.

Catholic’s quarterback Landon O’Connor passes the ball as St. Thomas More’s Nicholas Beckwith brings him down during the match up held at Memorial Stadium on Friday.

Catholic’s quarterback Landon O’Connor runs the ball on a quarterback keep against St. Thomas More during the match up held at Memorial Stadium on Friday.

There was a feeling of déjà vu when Catholic High kicker Kylan Dupre trotted on the final with 32 seconds remaining. A year earlier, a Dupre field goal gave the Bears a two-point win over St. Thomas More.

This time, soon after Dupre’s 53-yard field missed the mark, STM was able to celebrate a 39-38 come-from behind victory over Catholic at Memorial Stadium on Friday night.

The game between the top-ranked Cougars of Class 4A and No. 3 Catholic of 5A had three lead changes, 859 yards of total offense and plenty of big plays.

LSU commitment Walker Howard passed for 390 yards and five touchdowns, and Jack Bech caught 9 passes for 196 yards and 2 TD for STM (3-0). Corey Singleton ran for 113 yards on eight carries and scored the go-ahead TD for Catholic (1-2) with 9:46 remaining.

Catholic coach Gabe Fertitta second-guessed some decisions he made but said bringing Dupre on to try what would have been a career-long field goal was not one of them.

“That’s a really tough kick, but (Dupre) is capable of it,” Fertitta said. “We got the ball back and had a chance to win at the end, which is what you want.

“There were other chances we missed. I should have called for us to go for 2 after that touchdown down here (by Singleton). It was a great game. We’re playing a lot of young kids, and they will learn from it.”

It was the second straight loss for Catholic, which lost to the other 4A No. 1, Edna Karr, last week.

“It felt a lot like last year,” STM coach Jim Hightower said. “It didn’t end until the it (field goal) was over. You kind of hold your breath.”

The teams traded TDs in the third quarter. Catholic scored twice in the final quarter. A short drive ended with quarterback Landon O’Connor scoring on a 3-yard run with 11:52 to go in the game. Joshua Wax’s recovery of an STM led to Singleton’s 74-yard run down the STM sideline, which gave the Bears a 38-33 lead.

Howard’s 29-yard pass to Layton Avant was the big play before Bech caught an 8-yard TD pass that put STM ahead for good with 5:34 remaining.

“Jack and I have a connection,” Howard said. “But I have playmakers all around me. They all made plays.”

With 200 yards passing and three touchdowns in the first half, STM’s Howard displayed both arm strength and ability to complete touch passes. He connected with Bech on the fifth play of the game for a 63-yard touchdown.

The Bears countered with an 11-play, 70-yard drive that took 6 minutes and 8 seconds off the clock. O’Connor kept and scored on a 9-yard run for Catholic, tying the score at 7-7 with 4:38 to go in the first quarter.

It was the start of an offensive game of cat and mouse the two teams played in the opening half. The difference? The Bears opted to go for it on fourth down and came up empty after STM had extended its lead in the second quarter.

O’Connor’s 33-yard option pitch to Tae Nicholas set up a 2-yard O’Connor-to-Prince Edwards touchdown pass with 24 seconds left in the first quarter. The Bears led 14-13 at that point. O’Connor completed a 38-yard pass to Shelton Sampson Jr. to set up a 29-yard field goal in the closing seconds of the half hat cut STM’s lead to 26-17.

What happened in between was crucial. Howard tossed an 8-yard scoring pass Carter Domangue and a 3-yard touchdown pass to Paxton Perret made it 26-14.

Both coaches still have losses on their minds.