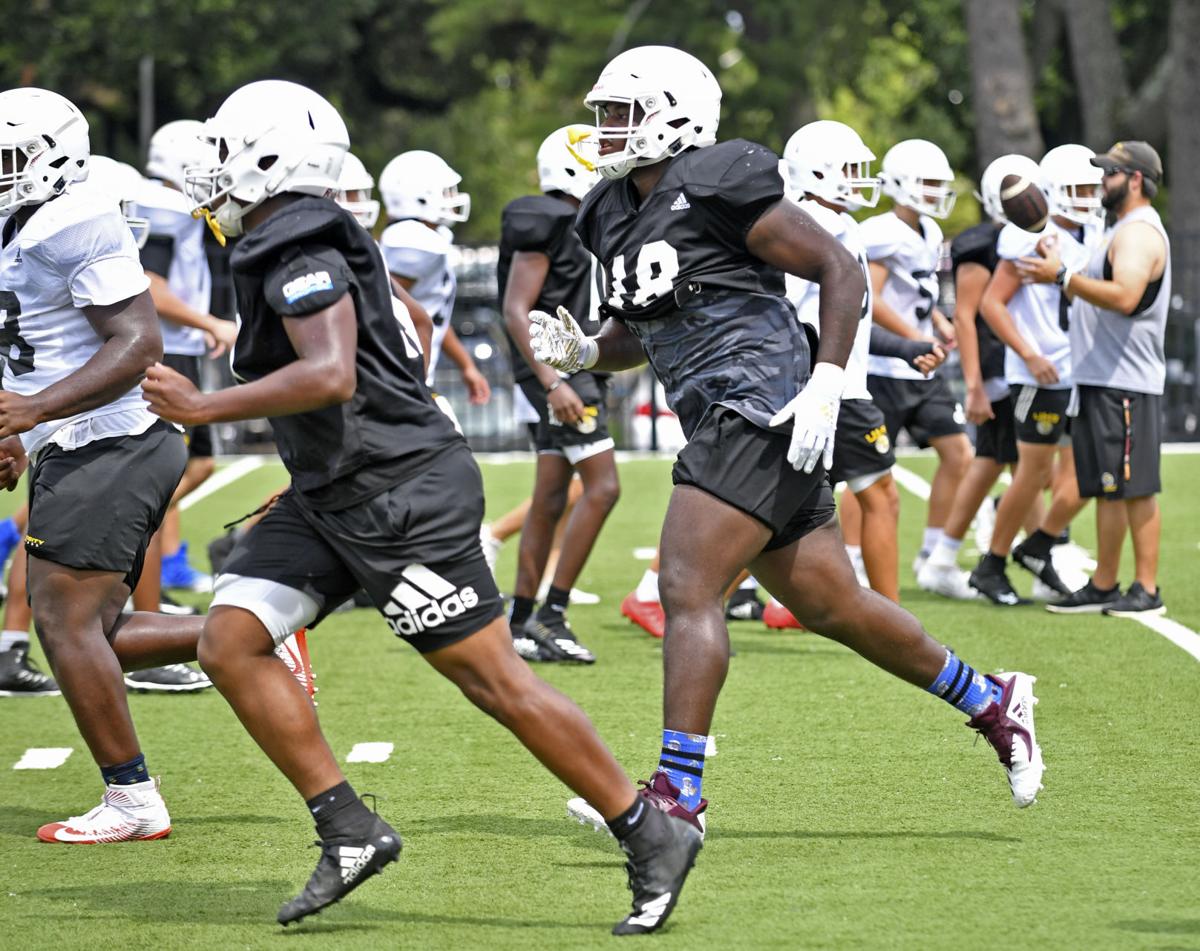 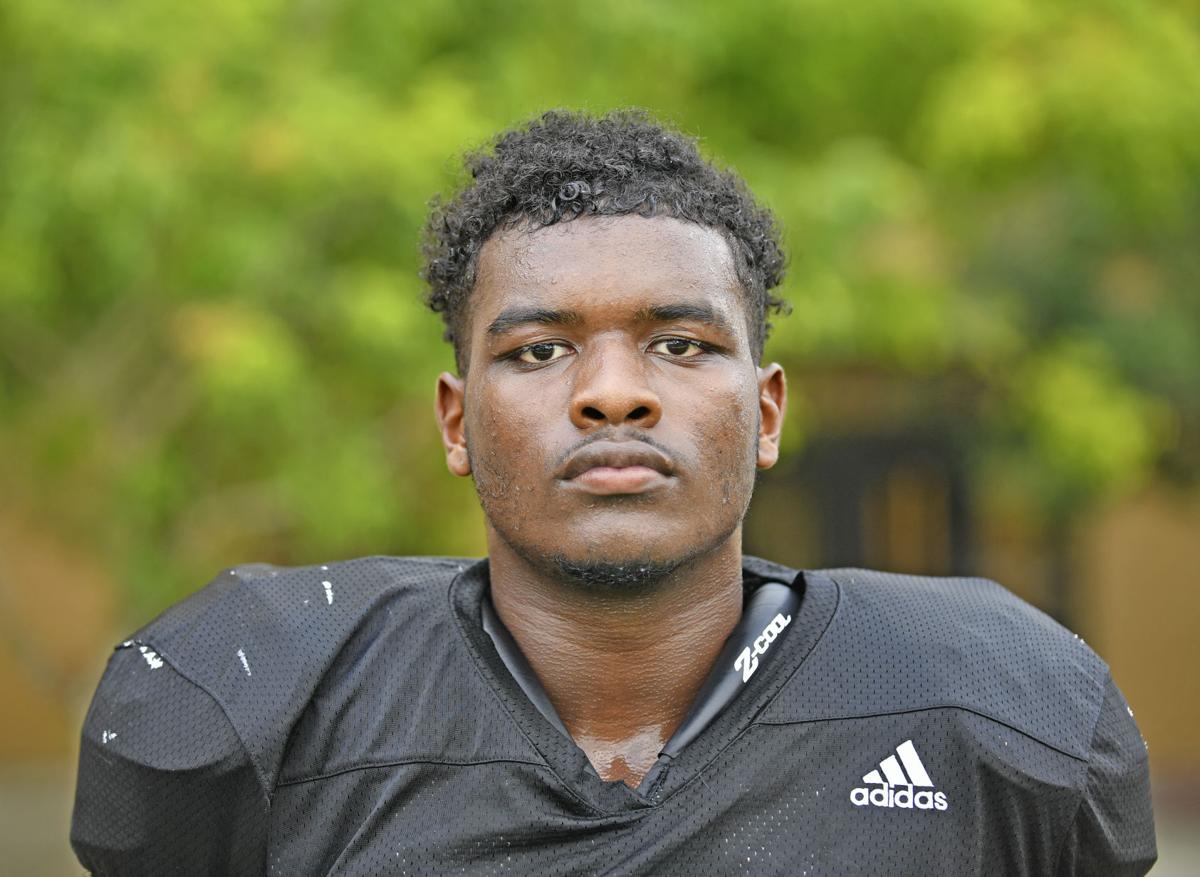 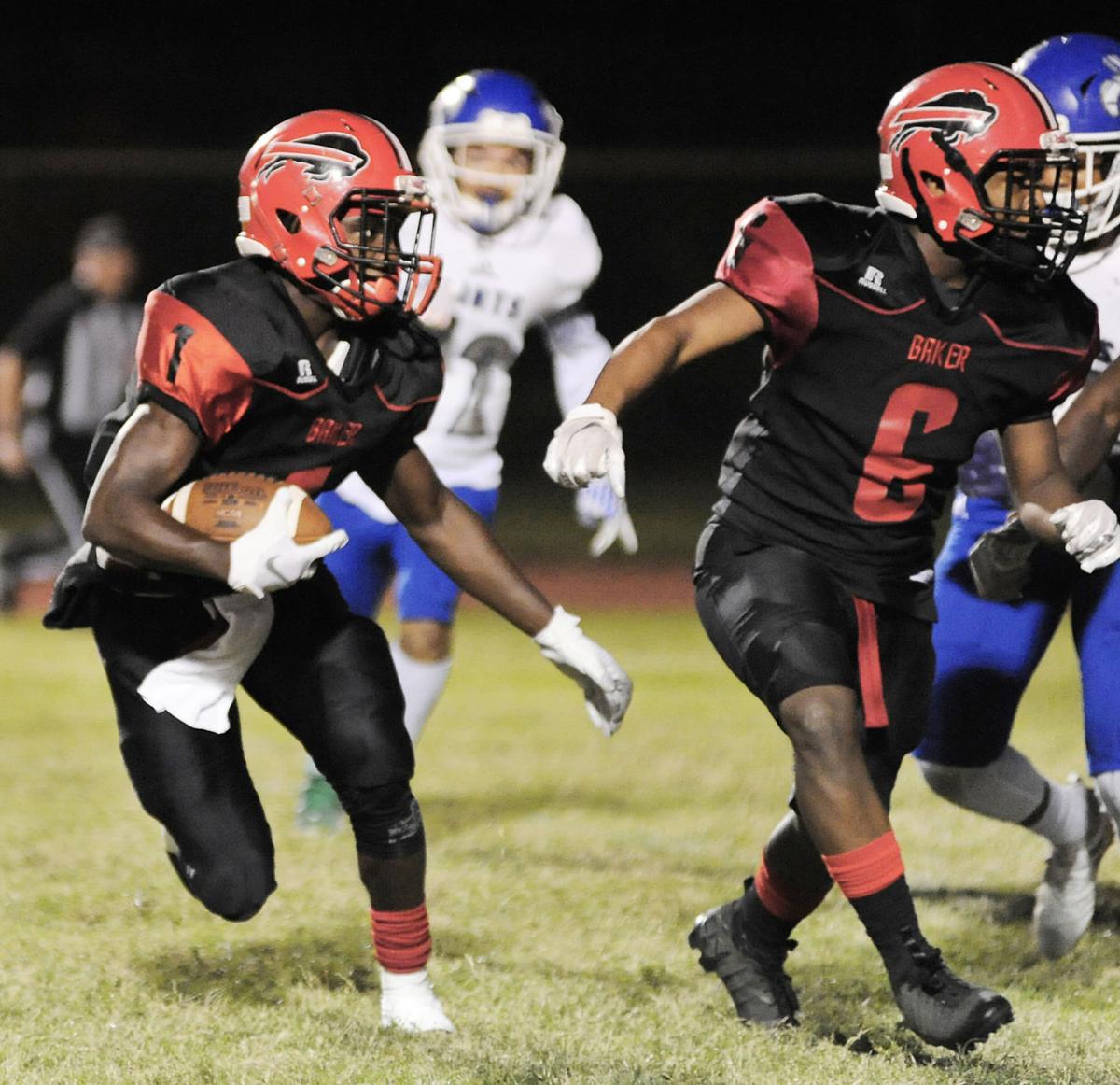 Baker's Desmond Windon follows his blocker Javarious Knox as he runs for a long gain on Friday night against West Feliciana at Baker. 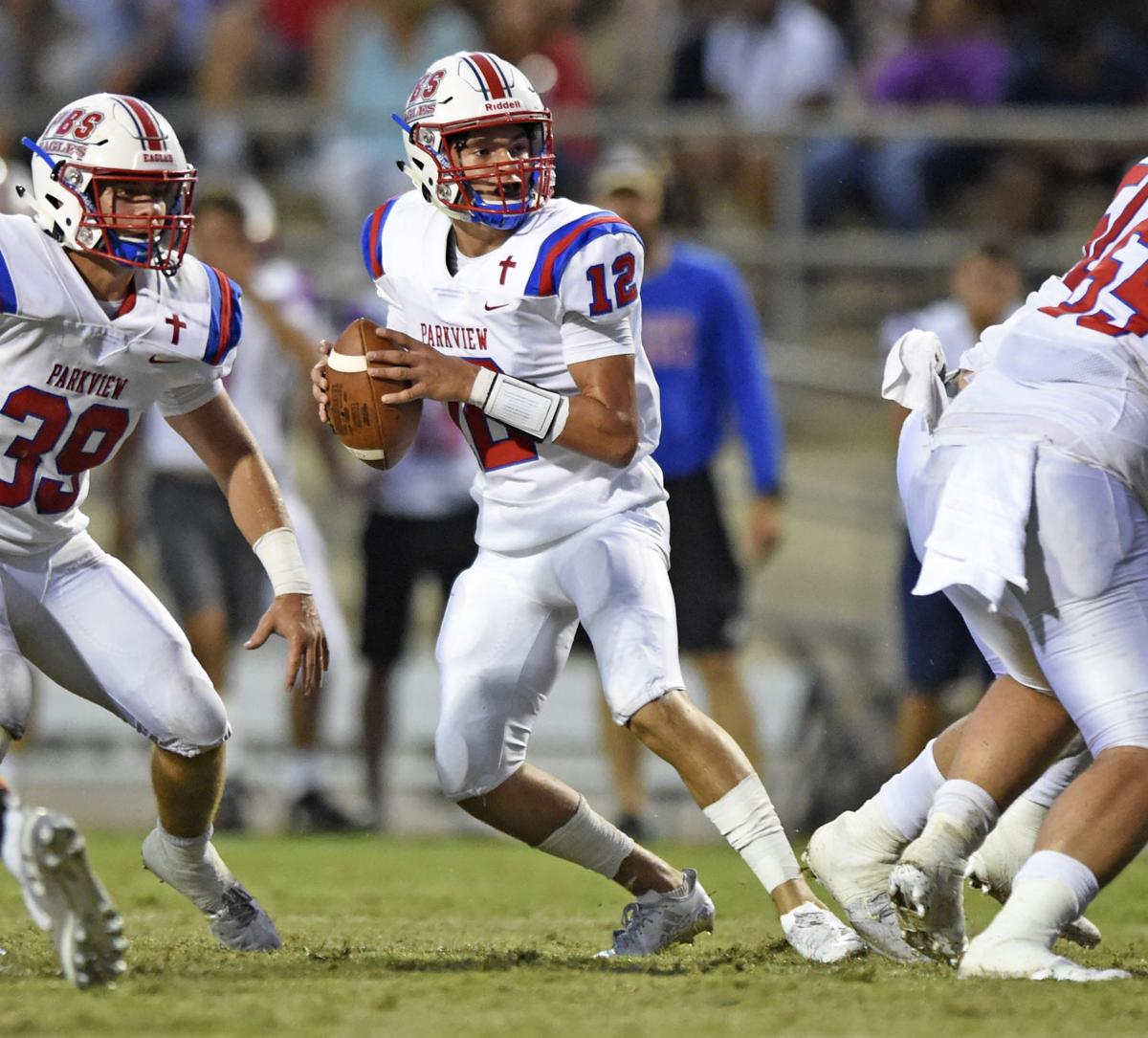 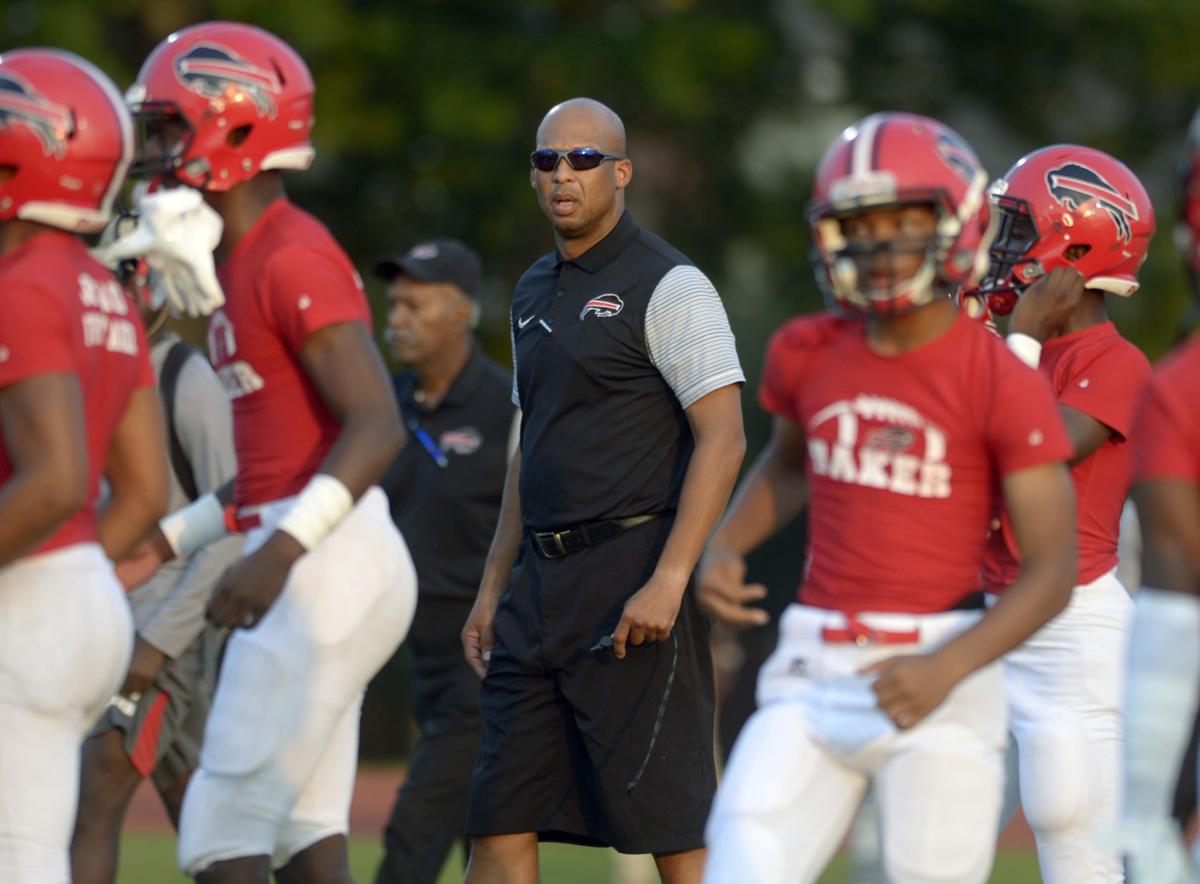 Baker head coach Eric Randall walks with his players as they warm up before playing Tara, Friday, August 24, 2018, during the Broadmoor Jamboree at Broadmoor High School in Baton Rouge, La. 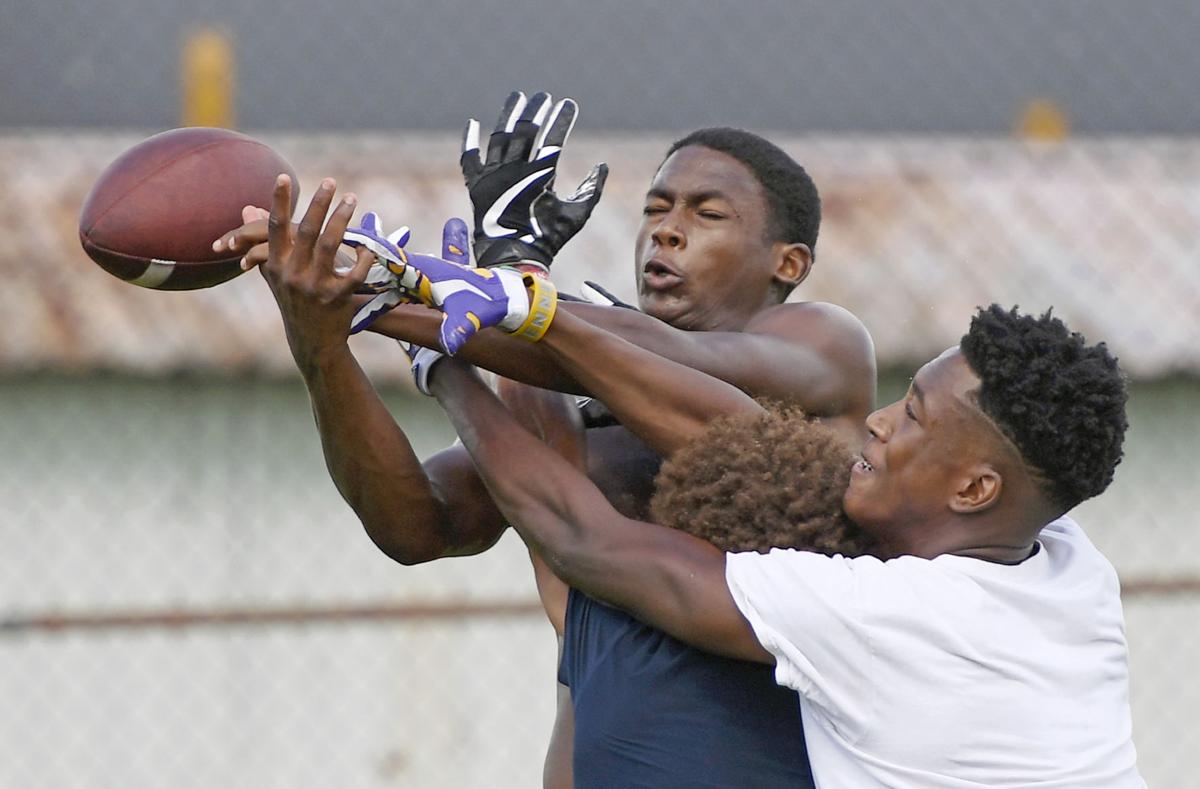 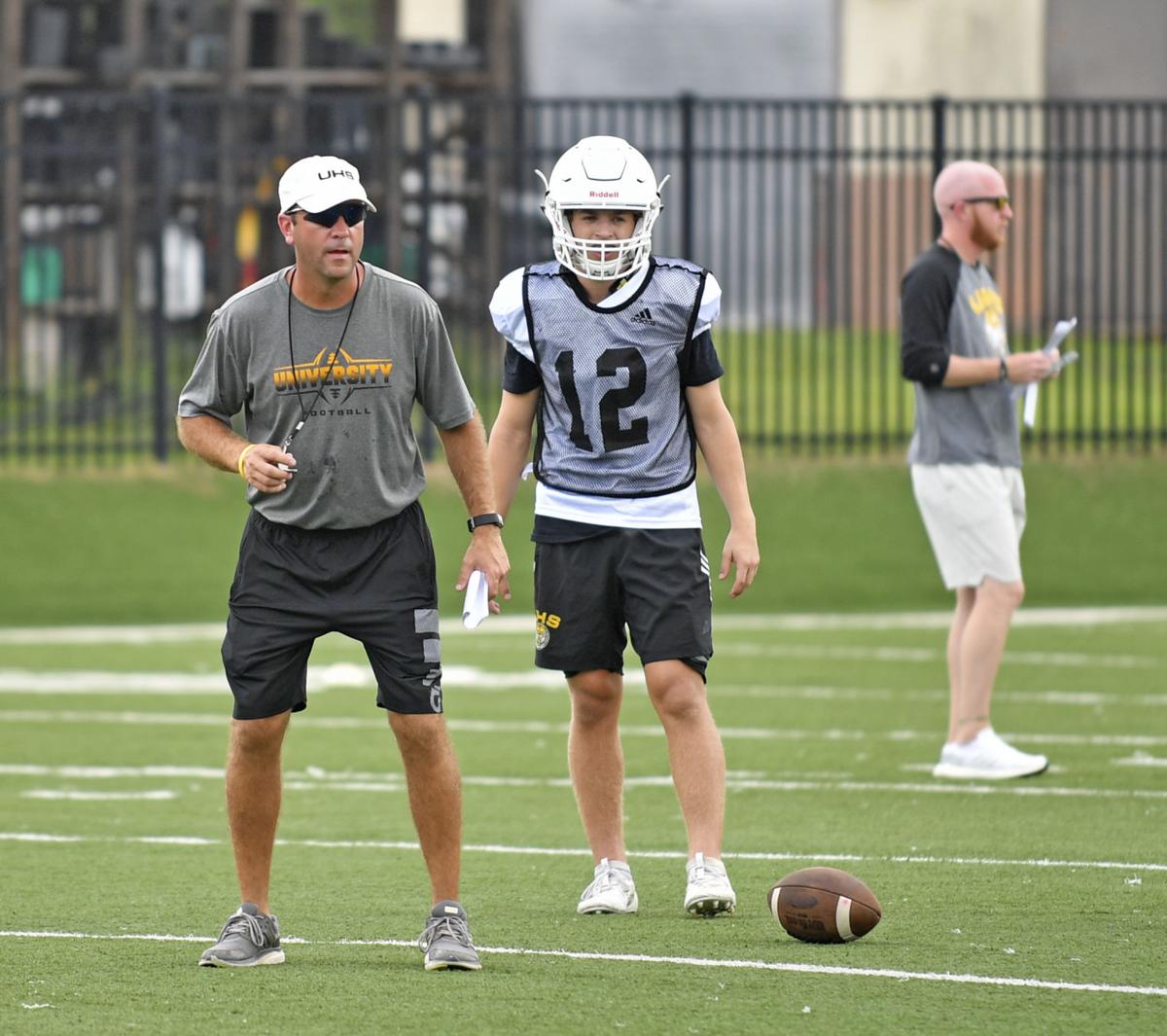 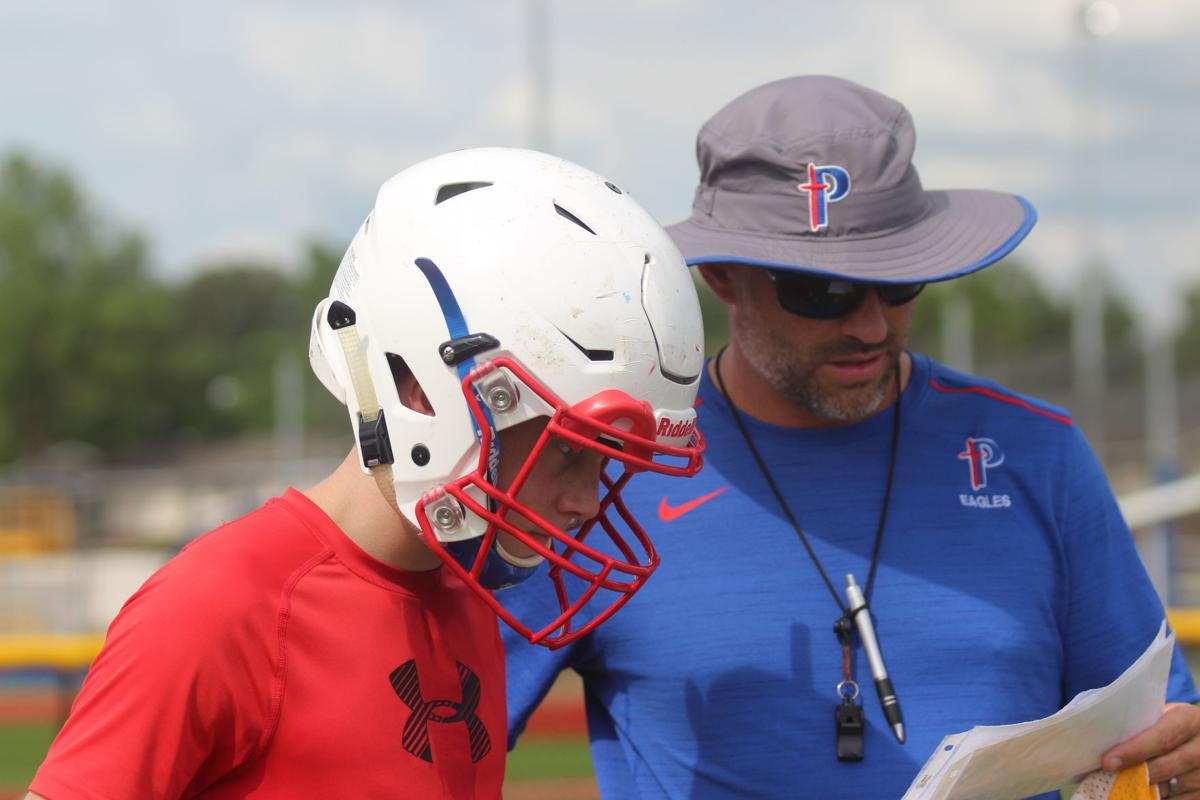 Baker's Desmond Windon follows his blocker Javarious Knox as he runs for a long gain on Friday night against West Feliciana at Baker.

Baker head coach Eric Randall walks with his players as they warm up before playing Tara, Friday, August 24, 2018, during the Broadmoor Jamboree at Broadmoor High School in Baton Rouge, La.

There are enough changes in District 7-3A to spice an already competitive league. However, some things do remain the same.

University High is riding a 26-game winning streak that includes two LHSAA Division II select championships. Despite graduating a talented senior class from a team considered to be among the best to ever play in Baton Rouge, the Cubs are the favorite to win 7-3A according to a preseason poll of the coaches.

But the race should be a close one. Baker placed second a year ago and returns most of its starters. Madison Prep also returns 15 starters after advancing to the 3A quarterfinals. Parkview Baptist drops back down from Class 4A to provide another top-tier team. West Feliciana is two years removed from winning a 3A title.

“You’ve got to put U-High first because they’ve proven it,” said Baker coach Eric Randall, whose Buffaloes were undefeated in district play last year until a 43-0 loss to the Cubs in Week 10. “Until someone knocks them off the top, they get the nod. I like our chances, but you’ve got to come ready to play.”

In addition to the Cubs and Saints, Parkview Baptist (Division II in 2015) has a recent title. Madison Prep was the 2A runner-up in 2016.

“So far the transition has been pretty seamless,” Martin said of his new role. “It's my 10th year here and a lot of the guys already know my expectations.”

U-High must replace 17 starters, including six players who signed with schools in a Power 5 conference. A seventh, quarterback John Gordon McKernan, is now a preferred walk-on at LSU.

But the Cubs do have Louisiana’s top player in the 2020 recruiting class in defensive lineman Jaquelin Roy, an LSU commitment to lead the way for a group of players looking to step into the spotlight.

“We’ll be young this year, but we’ve gotten to the point in our program where it's next man up,” Martin said. “We tell the next guy, ‘It's your time to perform.’ It's a place we always wanted to get this program to.”

Changing districts is just one of the challenges for Parkview, After years of running a speed option, LeFors’ Eagles are shifting to a spread offense that will feature much more passing.

“We have to be patient as coaches and take our time with what we want to put in,” said LeFors, who previously led Christian Academy of Louisville, Ky., to two Class 2A titles in the past three years.

“He was excited to try something different,” LeFors said of Mula. “What quarterback doesn’t want to throw it around a little bit? He’s got a lot on his plate, but he’s done a good job.”

Mula will only have three season games to acclimate himself before the seven-game district season begins. A ninth team, Collegiate Baton Rouge will not play a district schedule in its first year of varsity play this fall.

“This is one of the toughest districts in the state,” UHS’ Martin said. “You add in Parkview, then there’s Madison Prep with their talent, there’s Baker with one of their best teams in years, there’s West Feliciana, Brusly ... those teams are going to make it a dogfight every week. That’s what makes it exciting.”

MADISON PREP: Lost in 3A quarterfinals, 41-12 to Eunice

WEST FELICIANA: Lost in 3A first round, 28-6 to Church Point

“There won’t be any easy weeks in this district. I knew going in it would be a challenge. One of the parts of this job that was intriguing was the talent and level of play for high school football in this area of the country.”

PARKVIEW BAPTIST at U-HIGH, Oct. 3: Parkview has won its last two games against U-High including a 10-3 win in 2016, U-High’s last regular season loss.

U-HIGH at BAKER, Nov. 8: The Cubs ran away with a 43-0 win last year in a week 10 game that decided the district championship.

5 at Catholic at Memorial

FAST FACT: The closest game during the Cubs current 26-game winning streak was their 55-46 win over St. Thomas More in the 2018 D-II championship game.

BIGGEST STRENGTH: Line play on both sides of the ball.

BIGGEST STRENGTH: With eight starters returning on each side of the ball, the Buffaloes have experience.

FAST FACT: Parkview, which has won five state titles, last played for a title in 2016 losing in the DII championship to St. Thomas More.

BIGGEST STRENGTH: The Eagles will be more athletic overall than in recent years.

BIGGEST NEED: Line depth on both sides of the ball.

FAST FACT: After winning the 2016 2A championship, the Chargers have had two consecutive losing seasons.

BIGGEST NEED: Staying healthy will be vital with depth a concern.

BIGGEST NEED: Shake off a first-round playoff loss and regain the form that carried the Saints to the 2017 3A championship.

BIGGEST NEED: Experience in the defensive back seven where new starters at linebacker and in the secondary step in.

FAST FACT: Now beginning their fifth full season of play, the Sharks have only made the playoffs once.

BIGGEST STRENGTH: The Sharks have several big bodies on the offensive line.

BIGGEST NEED: Find a way to build on the program’s first victory, a 22-0 win over Glen Oaks in week 10 of last season.

FAST FACT: The Glen Oaks program has had three winless seasons in the last five years.

BIGGEST NEED: Touchdowns. The Panthers were shut out five times and scored only 50 points all of last season.