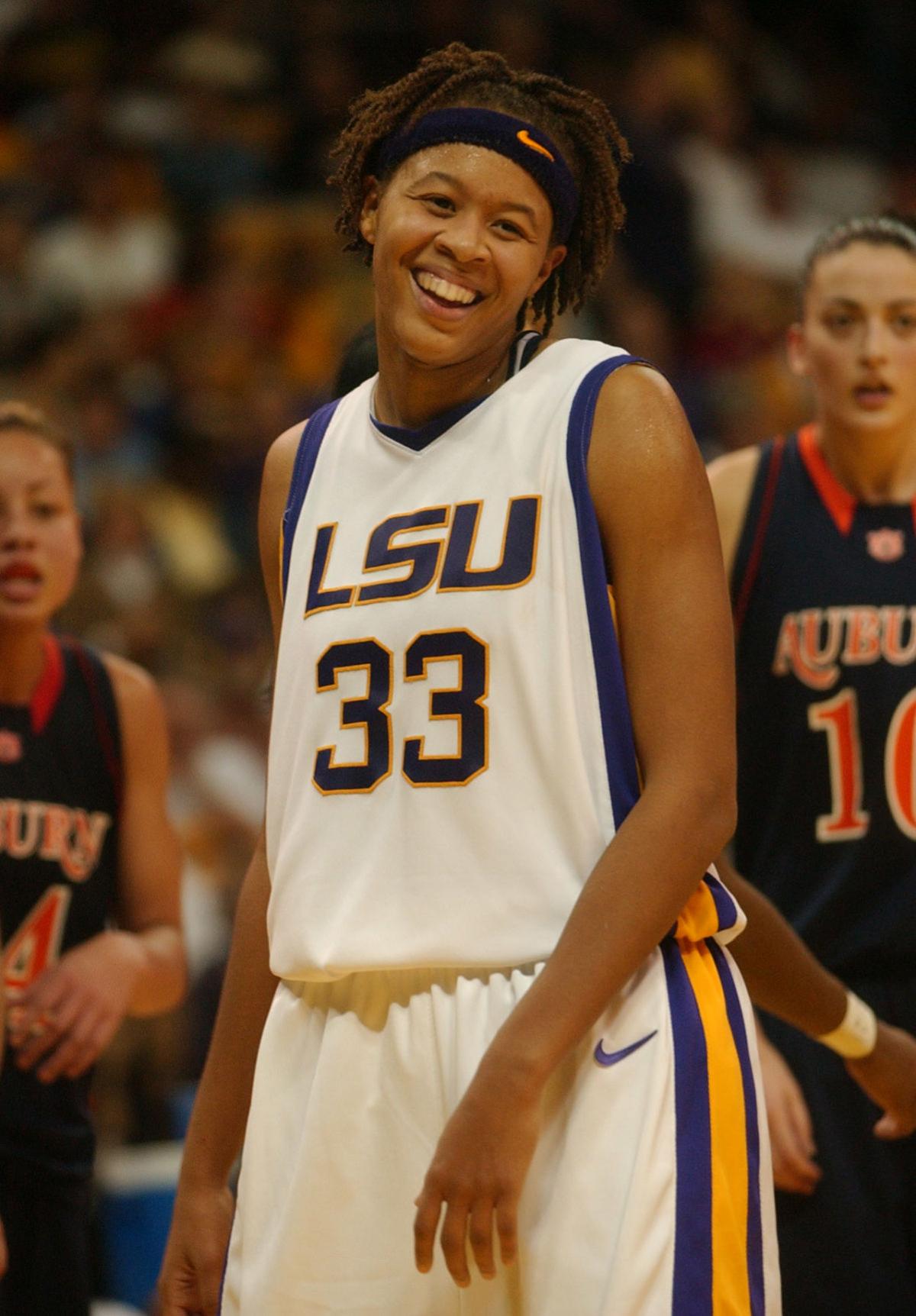 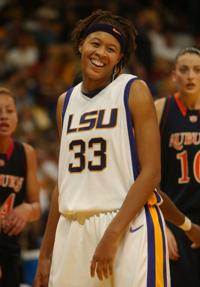 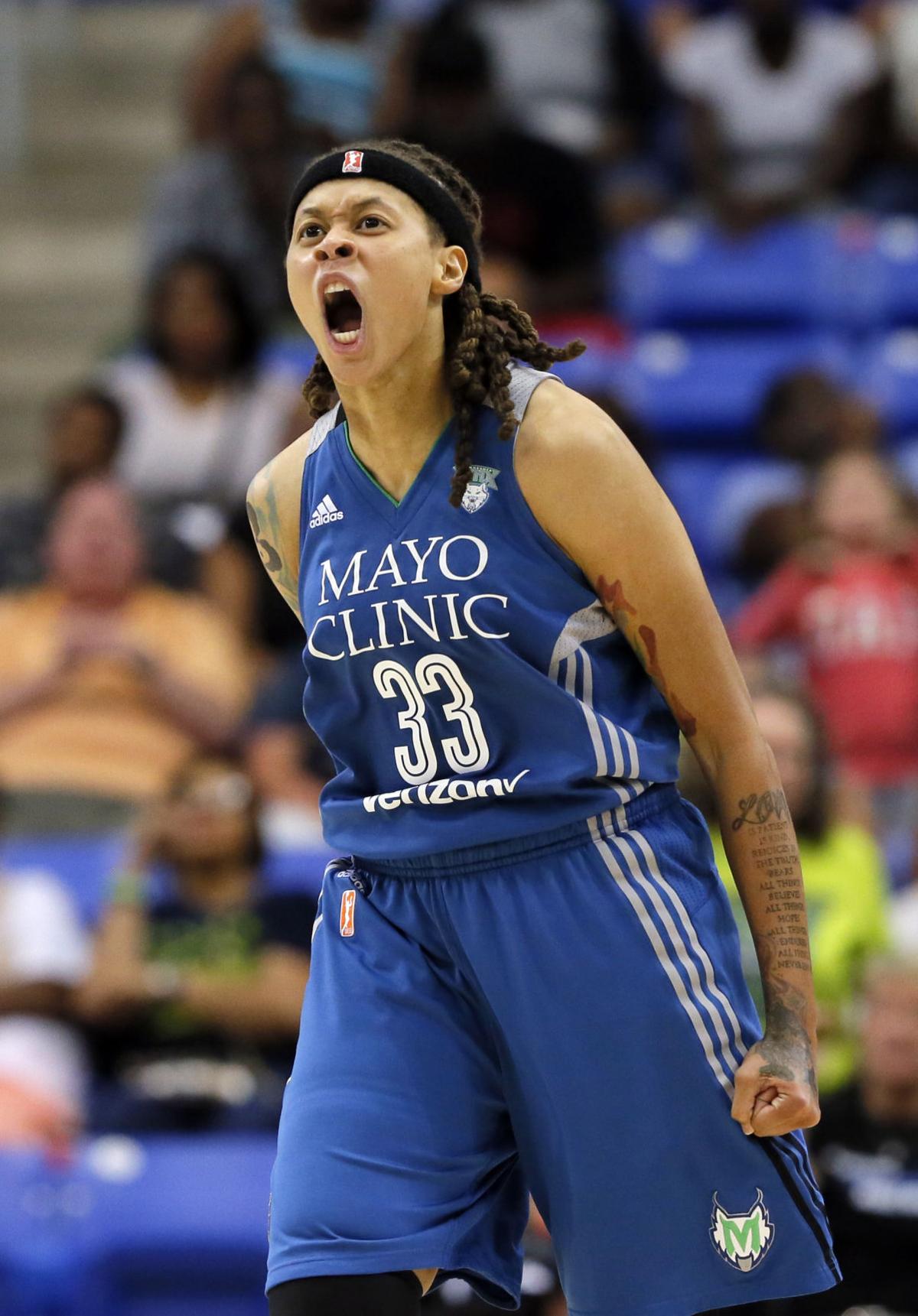 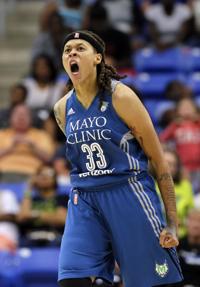 Minnesota Lynx's Seimone Augustus (33) celebrates after sinking a basket late in the second half of a WNBA basketball game against the Dallas Wings on Sunday, July 17, 2016, in Arlington, Texas. (AP Photo/Tony Gutierrez) ORG XMIT: TXTG110

Minnesota Lynx's Seimone Augustus (33) celebrates after sinking a basket late in the second half of a WNBA basketball game against the Dallas Wings on Sunday, July 17, 2016, in Arlington, Texas. (AP Photo/Tony Gutierrez) ORG XMIT: TXTG110

The Instagram post Seimone Augustus made last month from Minnesota has made the rounds. Instead of wearing practice gear or something in a Minnesota Lynx blue, Augustus wore her gold Capitol jersey.

“My wife called because she was so excited to see Seimone in that Capitol High jersey,” former Capitol coach Alvin Stewart said. “Seimone never forgets where she came from. She’s proud to be from Baton Rouge, Capitol and LSU and she shows it. And we’re proud of her. Those are her true colors, too.”

Augustus, who starred for Stewart at Capitol from 1998-2002, is part of a star-studded class being inducted into the National High School Sports Hall of Fame at 5 p.m. Sunday in Indianapolis. Former NFL star Derrick Brooks, Major League Baseball player and manager Dusty Baker and Indiana basketball legend Damon Bailey are in the class too.

While giving those other inductees their due, Augustus’ former teammates and those who watched her become the face of girls basketball in Louisiana contend she is the brightest star in the bunch.

“Seimone Augustus is one of a kind … there will never be another like her as far as I’m concerned,” former Glen Oaks coach Janice Walker Charles said. “She is so deserving of this award and everything she has won. Seimone changed girls basketball, not only in Baton Rouge, but in the state of Louisiana.

“I started coaching in Baton Rouge for a few years before she came along and you could not get people, especially men, to watch girls basketball. They thought it was slow and boring. Seimone elevated the game.”

At age 35, Augustus is being inducted into the high school hall of fame in her first year of eligibility. She is the first athlete from Baton Rouge inducted since the late Jim Taylor who starred at Baton Rouge High, LSU and the Green Bay Packers. Augustus is the third woman from Louisiana inducted, joining Hammond High/Louisiana Tech star Kim Mulkey, now the coach of NCAA champion, and the late Edna Tarbutton, a legendary coach at Baskin.

Some may think of Augustus as an LSU and WNBA star. She led LSU to three Final Four berths and was National Player of the Year twice. Augustus also is a three-time Olympic gold medalist and has four WNBA titles with the Lynx.

The pride Augustus shows as a Lion alum is matched by former teammates as they recall a golden era for their school.

“Those were the best times of our lives,” Adrian Blake, a former Southern player, said. “It has an impact all our lives to this day. I’ve had doors open for me professionally as a coach. Colleges came to recruit her, saw us and we got offers. People ask me now where I played and when I tell them Capitol they immediately say ‘Wait, you played with Seimone.’ You can see it in their eyes. They remember it was special.”

The hype began before Augustus reached high school. Years before social media, people knew about the girl who dunked in a junior high game — a feat she repeated during pre-game warm-ups for the first McDonald’s All-American Game for girls in 2002.

There was a cover shoot and story for Sports Illustrated for Kids, which asked “Is She the next Michael Jordan?” when Augustus was a freshman. Augustus averaged 27.4 points a game that year and went on to finish her career with 3,600 points, 1,728 rebounds and was a two-time Miss Basketball as a junior and senior. Capitol had a 138-7 during her four years, including 52 straight wins and two LHSAA Class 4A titles to close out her high school career.

It was an exuberant, surreal and heady time for Blake, her twin Ashley, and Carla Robinson. Every game attracted a sellout crowd. Capitol helped the LHSAA set attendance at two sites — Monroe and Hammond.

“Back then, if you didn’t get to the gym by 4 p.m. you didn’t get in,” Robinson said. “We had to put our parents’ names on a list to make sure they got in. There were times the boys actually played first because so many people wanted to see Seimone. I’d give anything to have just one more quarter to play.”

Augustus’ social media moniker of “Money Mone” had its beginnings back then. Augustus’ quiet demeanor and humble approach to the game belied the cross-over dribble and soft-arching jump shots fans cheered.

“Seimone wanted to be good, but she wanted all of us to be good, too,” Ashley Blake, also a former SU player, said. “She comes from a wonderful family that shaped her and helped shape us. There were times in high school when it was just me and Seimone in the gym. She taught me so much. She’s here for us now. Whether it’s a baby that comes or a wedding, if Seimone can’t be there, she reaches out.”

Stewart is now the dean of students at Capitol. Current students who see pictures of Augustus in his office, along with her awards banners, and those LHSAA title banners are awestruck too.

“Wait … you coached her,” to which Stewart responds, “Yes, I did. I use her as a role model today because she was good on and off the court.”

“In the press conference Seimone told everyone she dedicated her MVP award for the game to me because I played well. Who does that? It stuns me and touches me to this day,” Robinson said. “I remember thinking, ‘Are you for real, everybody knows you are the best player on the floor.’ Yes, Seimone is for real. She deserves this honor … she made us and the game better.”

On eve of Hall of Fame event, ex-Capitol and LSU star Seimone Augustus urges others to dream