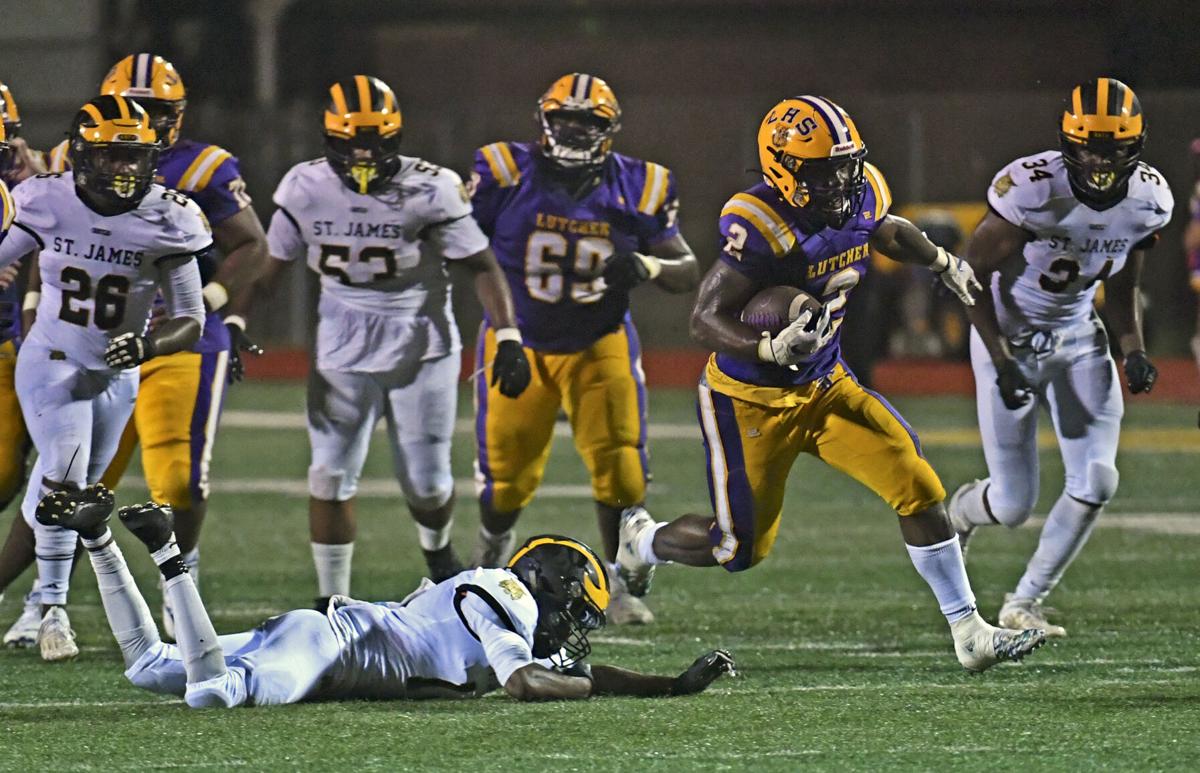 Lutcher's Ra'Shaun Storms (2) slips the tackle by St. James' J'Kory Ester (12) as he makes his way to the end zone for the touchdown, Friday, October 23, 2020, at Lutcher High School in Lutcher, La. 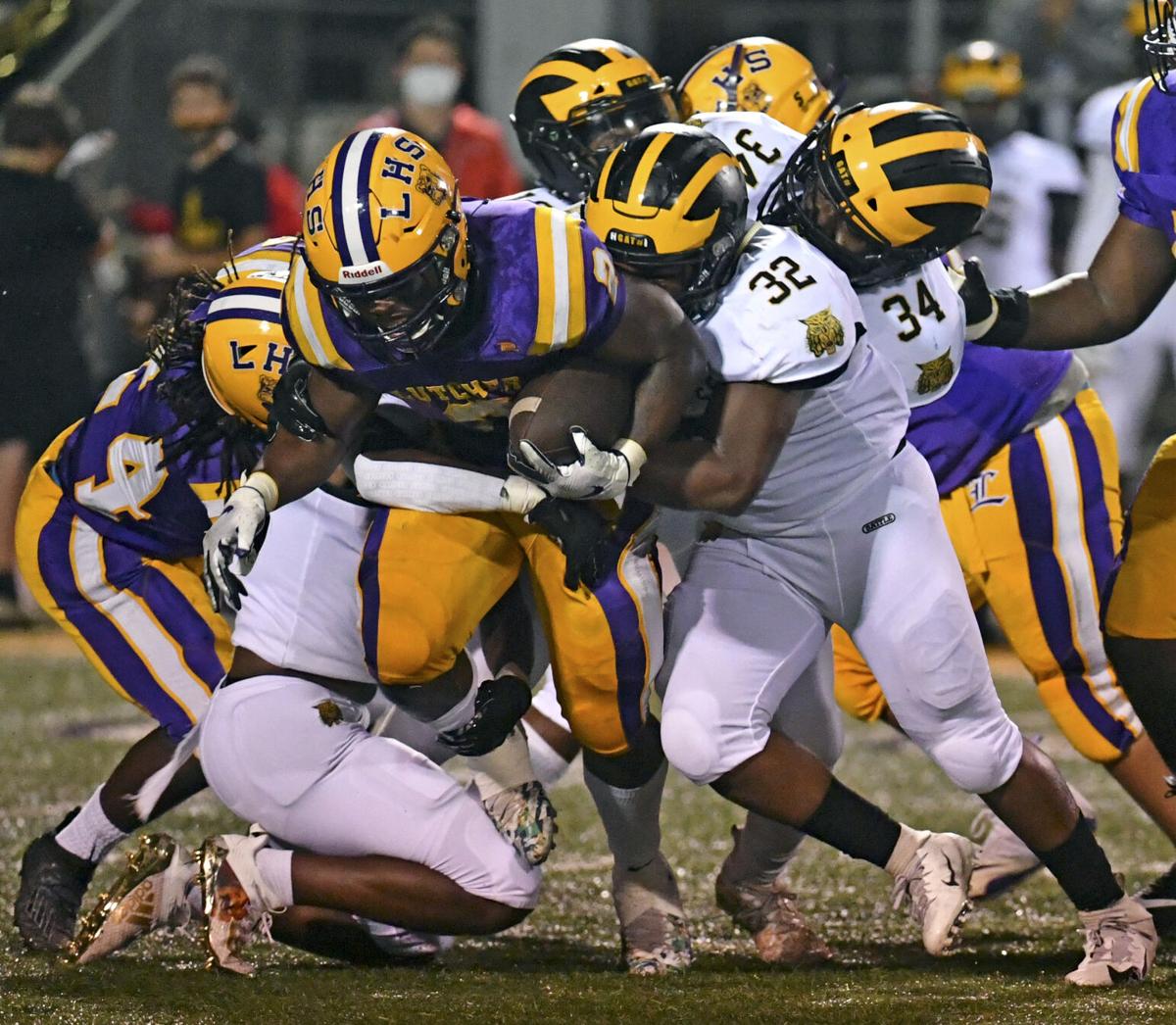 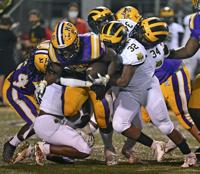 Lutcher's Ra'Shaun Storks (2) gets jammed up on the carry before the stop by St. James, Friday, October 23, 2020, at Lutcher High School in Lutcher, La.

Lutcher's Ra'Shaun Storms (2) slips the tackle by St. James' J'Kory Ester (12) as he makes his way to the end zone for the touchdown, Friday, October 23, 2020, at Lutcher High School in Lutcher, La.

Lutcher's Ra'Shaun Storks (2) gets jammed up on the carry before the stop by St. James, Friday, October 23, 2020, at Lutcher High School in Lutcher, La.

LUTCHER — It was a classic rivalry that played out more like a throwback to a different era.

Ultimately, a throwback few people expected — a 13-yard touchdown pass from Marquell Bergeron to Jonathan Wilson with 1:58 remaining — lifted St. James to a 17-14 victory over Lutcher on Friday night at LHS.

“There is always drama here in St. James Parish … we wouldn’t have it any other way,” St. James coach Robert Valdez said after watching Lutcher’s Noah Detillier miss a 38-yard field goal that would have the District 9-3A opener on the game’s final play.

Instead, Lutcher (2-2, 0-1) relied on running back Ra’Saun Storks and D’Wayne Winfield to rush for 208 yards on the night. Storks had a game-high 145 yards on 21 carries with one touchdown.

Winfield, the Bulldogs’ sophomore quarterback, leaped over the top on St. James defense on fourth-and-goal at the SJHS 1 to give Lutcher a 14-10 lead with 4:14 remaining. He ran for 63 yards on 18 carries. Kaden Williams led St. James with 75 yards on 16 carries.

“We are a work in progress,” Lutcher coach Dwain Jenkins said. “If I had to do over again, I’d put Noah Detillier out there to kick it. I believe St. James is one of the best teams in 3A. We fought and got back into it, but you’ve got to find a way to close out (the game).”

Instead of seeking out Preston with the game on the line, Bergeron looked away from Preston, who had just caught two passes to pick up first downs that kept the decisive drive alive.

Bergeron turned to his left and tossed the game-winning TD pass to Wilson, who missed most of St. James’ 2019 Class 3A title season with an injury.

“Here is a kid (Wilson) who has been through a lot with an injury,” Valdez said. “He came to me tonight and asked that we throw him the ball. I said we just had to stick to the game plan and see how it plays out. I’m so happy for him to get that chance.

“Our quarterback (Bergeron) had the option and made the decision to throw it to him (Wilson). That was a savvy decision.”

Winfield completed a 35-yard pass to Detillier on the first play after St. James took the lead for good. The Bulldogs had the ball at the SJHS 45. Storks and Winfield each got a carry in an attempt to break a long run before the final field goal try. St. James defensive lineman Saivion Jones, an LSU commitment, helped disrupt multiple plays on the final drive.

Holding penalties hampered both teams early. St. James intercepted a pass that was battled up in the air on the second scrimmage play. But a holding penalty nullified a TD run by Williams.

Another holding penalty erased a second potential TD on the Wildcats second possession. Three penalties took away TDs that could have put St. James in the driver’s seat.

Kicker Alec Mahler missed his first field goal try but booted a 34-yarder through that gave the St. James a 3-0 lead with 3:56 to go in the first quarter.

The Wildcats scored again on their next possession. Kaleb Brown’s 3-yard TD made it a 10-0 game with 6:25 remaining in the half. A first-half altercation between the two teams near the St. James sideline led to offsetting unsportsmanlike conduct penalties.

St. James held Lutcher’s Storks in check for much of the first half. On the Bulldogs’ fourth possession he broke a 20-yard run up the middle, followed by a 37-yard TD run through the heart of the Wildcat defense with 1:18 left. That cut St. James lead to 10-7 at halftime.