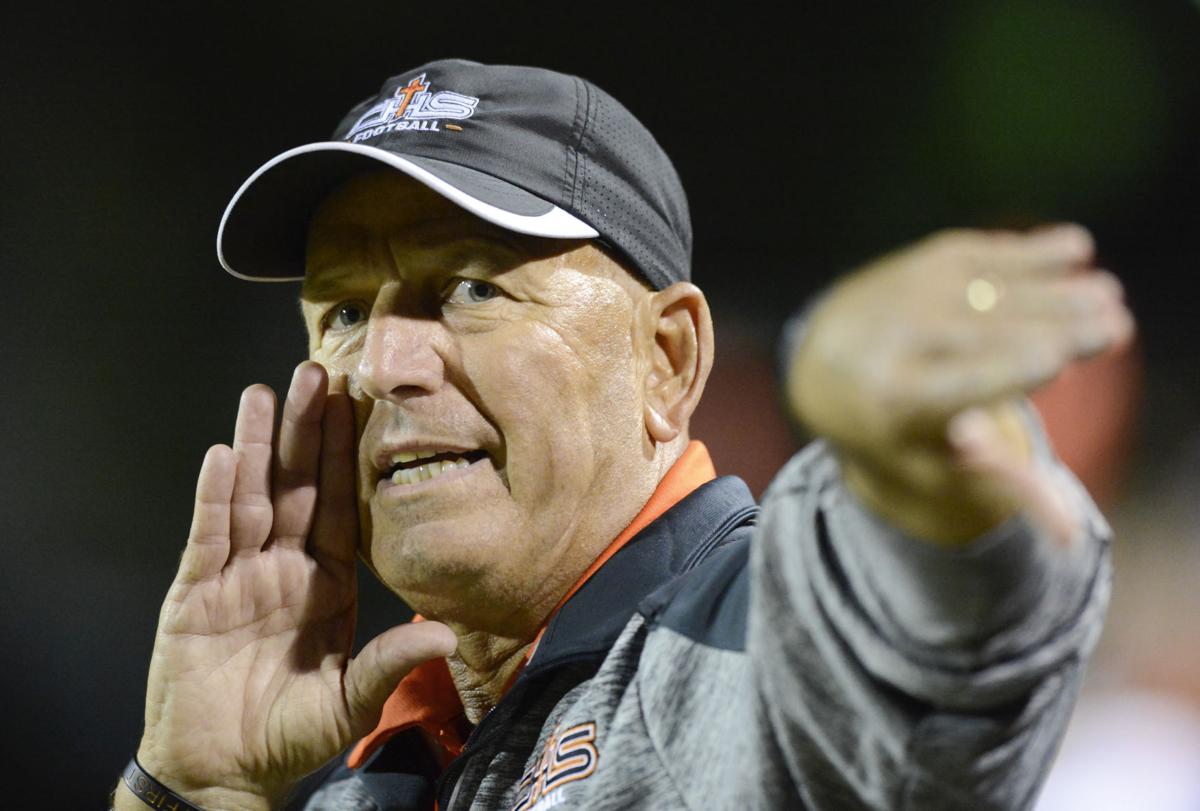 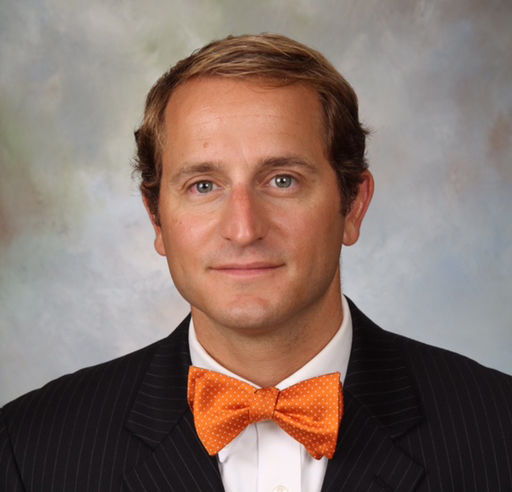 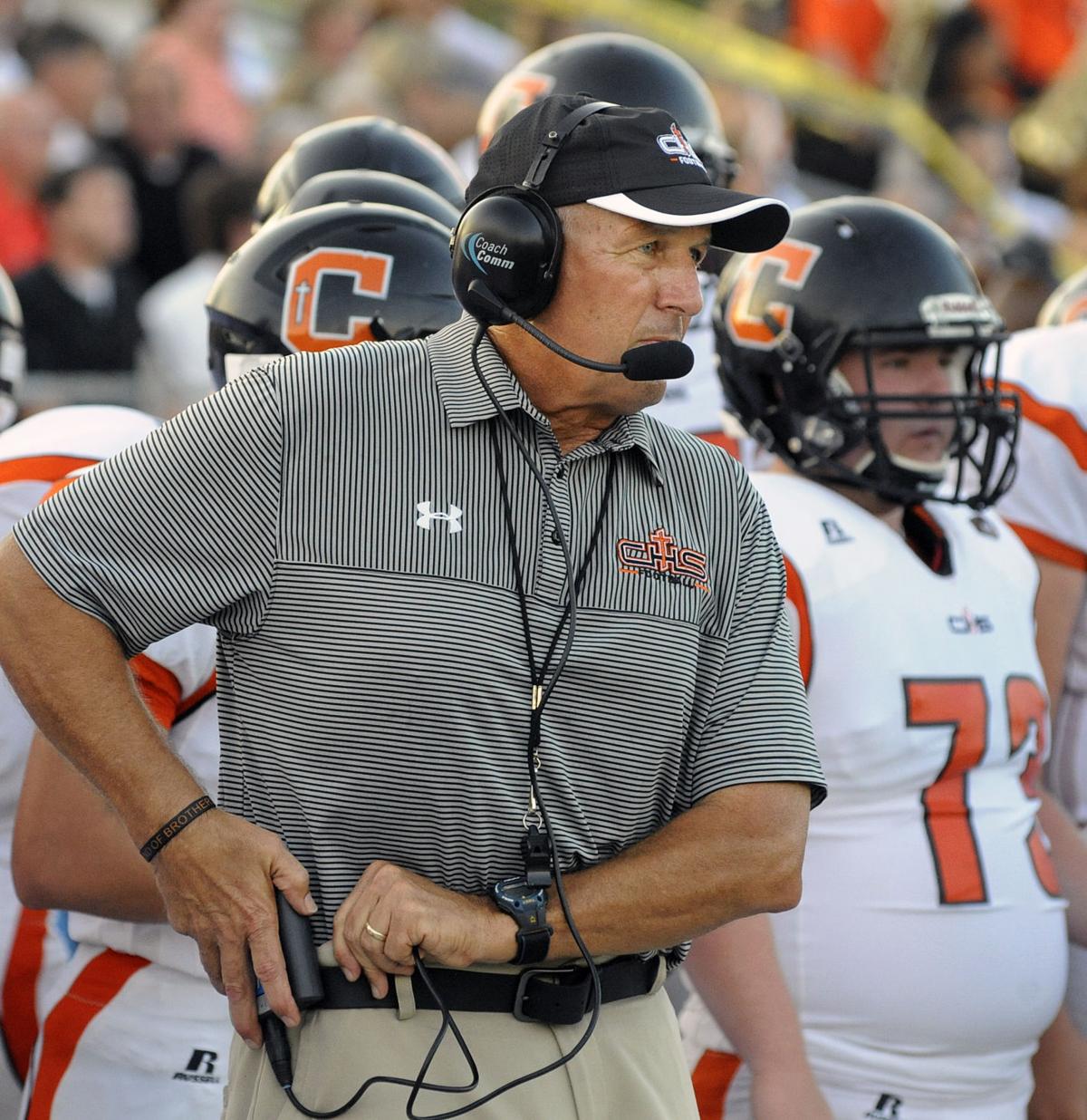 Catholic coach Dale Weiner adjusts his headset prior to the start of play against Parkview on Friday at Parkview. 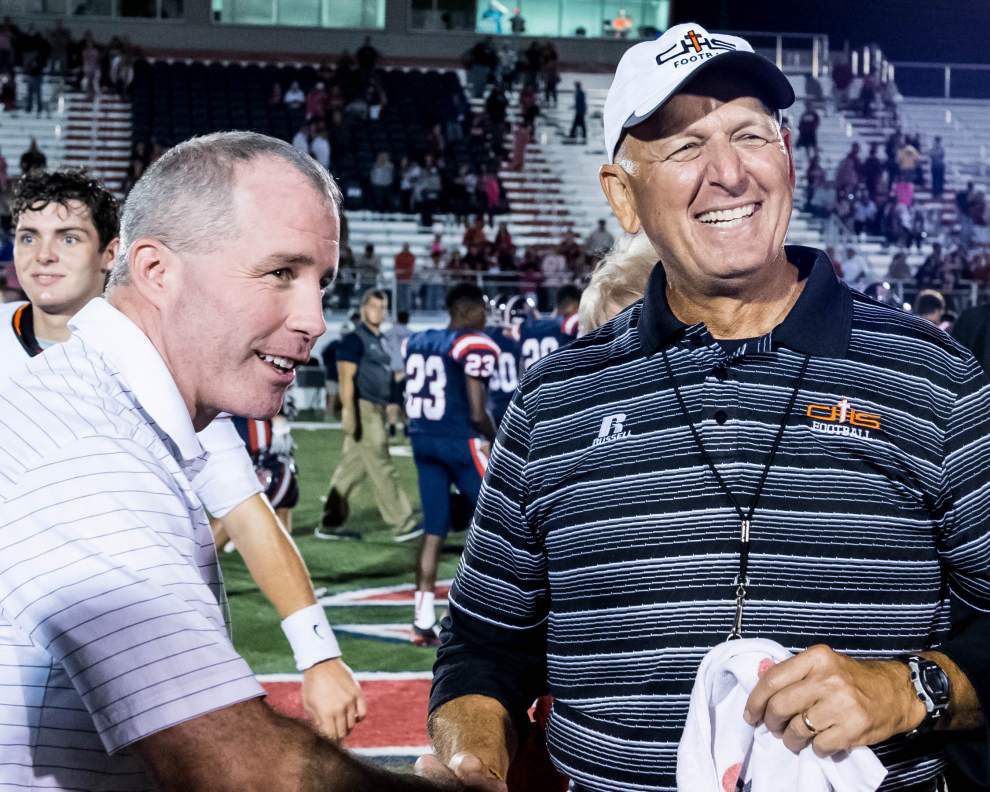 Catholic coach Dale Weiner adjusts his headset prior to the start of play against Parkview on Friday at Parkview.

In turn, Catholic made a call of its own, naming offensive coordinator Gabe Fertitta the Bears' new coach. Faculty, staff and the Catholic High players learned of Weiner's decision Monday afternoon.

“This is something I thought about and really prayed about,” he said. “The more I thought about it, I realized the time is right. I’m at peace with the decision and look forward to what is next. Gabe is going to do a fabulous job. I have all the confidence in the world in him and our other coaches.”

The 64-year-old Weiner spent 30 years as head coach at Catholic, compiling a 282-89 record, including a state runner-up finish in 1990 in Class 4A and the Division I select state title in 2015. Weiner's teams won 18 district titles, made 15 state quarterfinal appearances and had eight state semifinal appearances.

Weiner’s overall record of 317-110 in 36 seasons as a head coach ranks seventh on Louisiana’s all-time wins list. He spent 42 years as a head or assistant coach. He also was head coach at St. John, Catholic-Pointe Coupee and Trafton Academy.

Weiner will continue to teach at Catholic and will work with the Fellowship of Christian Athletes and other groups, he said.

Fertitta, 34, has been Catholic’s offensive coordinator for the past three seasons. Before that, he spent two seasons as head coach at St. Stanislaus in Bay St. Louis, Mississippi. Fertitta also spent three seasons at Catholic as an assistant, starting in 2007.

“First of all, I want to make it clear that this was 100 percent Dale Weiner’s decision,” said Catholic High athletic director J.P. Kelly, who also played for Weiner. “He came to me and we talked, and then he talked with his wife and made a decision. I’m not sure anyone has had a bigger impact on my life than Dale Weiner. He’s that kind of person. His contributions to this program and the school are so tremendous. You can’t replace a Dale Weiner.

In a news release, Catholic High Principal Lisa Harvey noted, “Dale has been an outstanding football coach at CHS for the past 30 years. More importantly, he is an outstanding man of character, and I am grateful that, even though he is retiring from the field, he will remain at Catholic High as a full-time faculty member."

Fertitta is a 2000 Holy Cross graduate who played wide receiver at Mississippi College and was a graduate assistant coach for the Choctaws. He was offensive coordinator at Locust Fork High School in Alabama before his first stint at Catholic, where he served as wide receivers and offensive line coach.

After a stint as offensive coordinator at Mississippi’s Itawamba Community College, Feritta moved to St. Stanislaus.

“From the first time I came to Catholic High in 2007, I absolutely knew this was a place I wanted to be,” he said. “I love the school, and I love the mission of the school. ... When I first came here, I was pretty confident in my abilities as a coach. Meeting Dale Weiner changed that. Just seeing the way he worked with kids and made football more than a game and the plays you run made an impact on me.

“It was the same with Pete Boudreaux, when I worked as an assistant track coach. Watching those two men use coaching as a tool to develop young men through sports has made a huge impact on how I coach.”

Sources also confirmed to The Advocate that Catholic defensive coordinator Matt Burmaster has resigned as part of the coaching transition.

Weiner was state Coach of the Year three times and district Coach of the Year 15 times. He has coached four high school All-Americans, had more than 140 athletes play college football and 16 players play professionally. Weiner is a member of the Louisiana Weightlifting Hall of Fame and Catholic’s Grizzly Greats Athletic Hall of Fame.

"Dale Weiner always did things the right way and for the right reasons," Hightower said. "He's a tremendous coach. He's the kind of coach I'd want my son to play for."

Dale Weiner, at a glance

42 years as a high school football coach; 36 as a head coach, including 30 at Catholic High