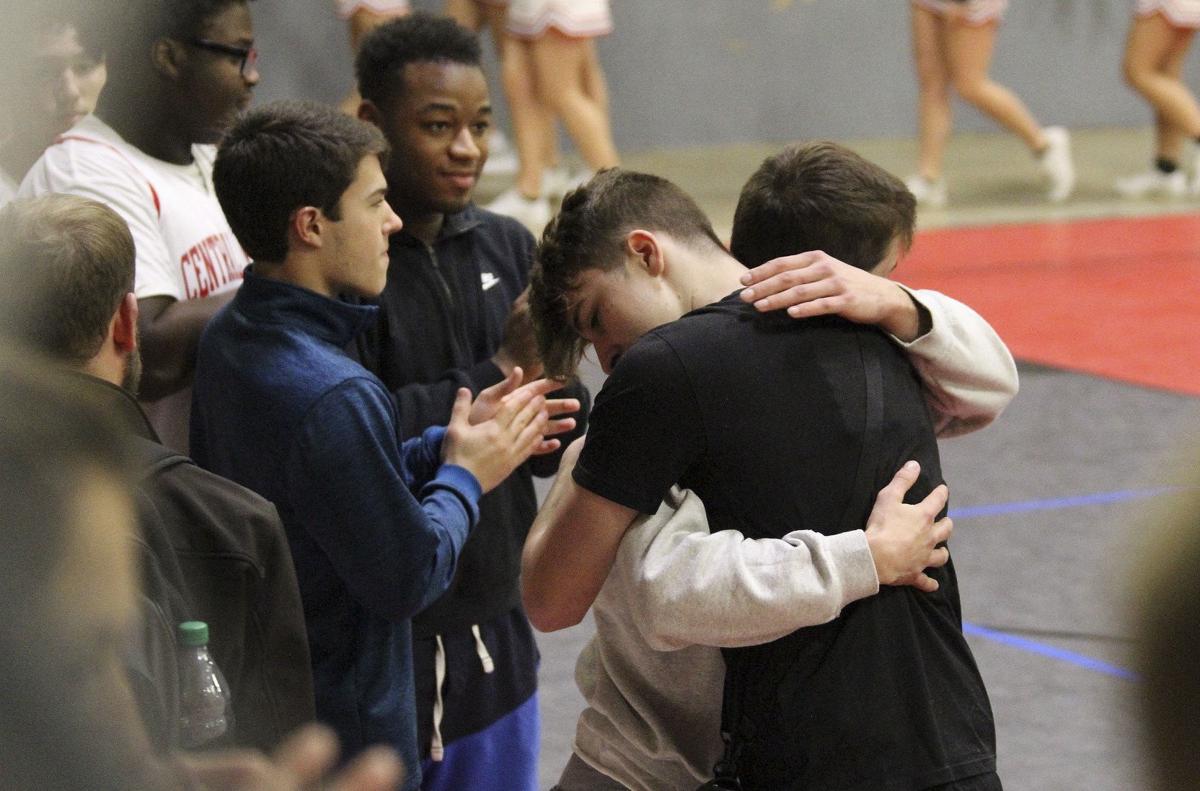 Central Private's Noah Martin is greeted by teammates after making surprise visit to team's game against Thrive Academy after being released from the hospital. 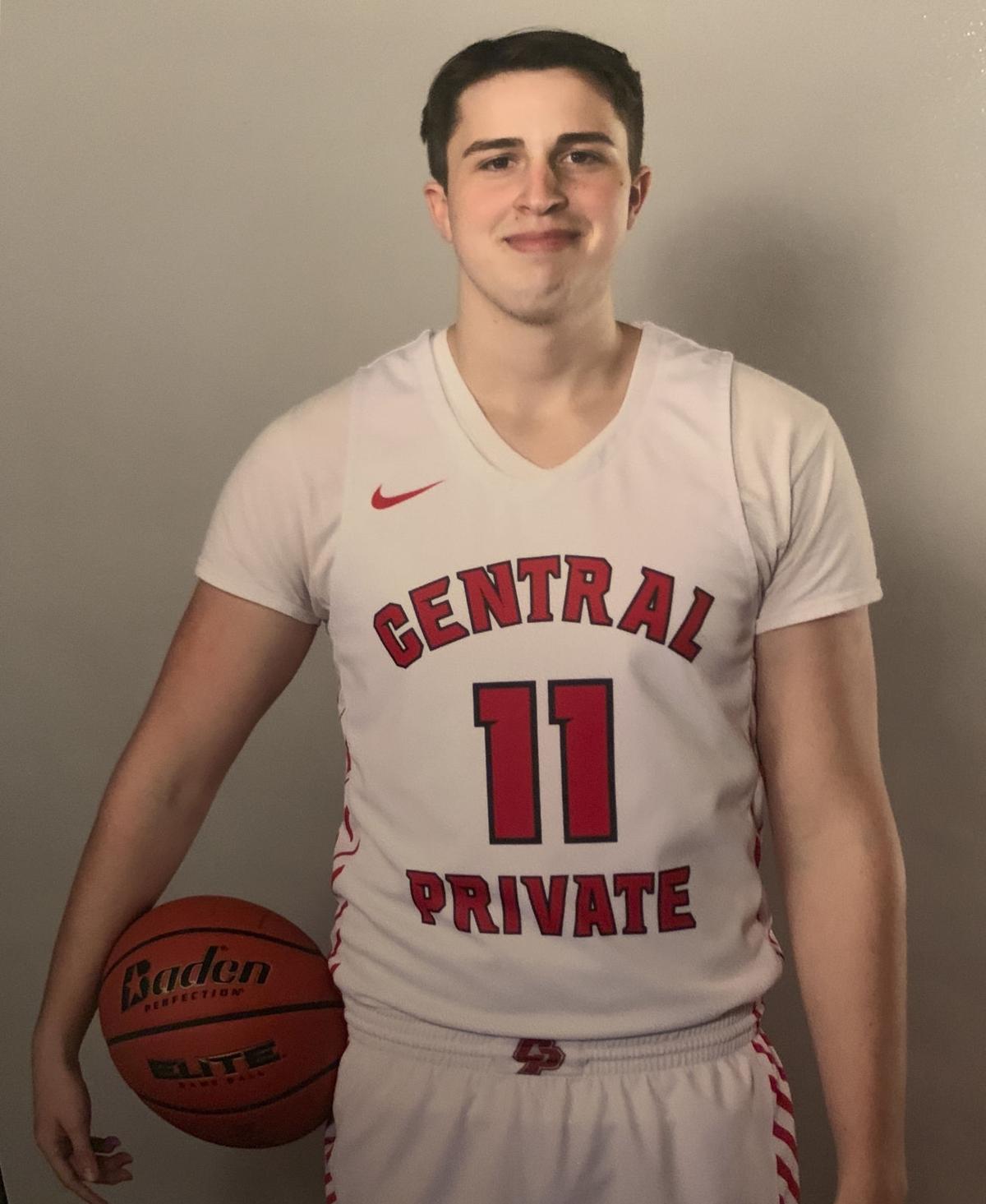 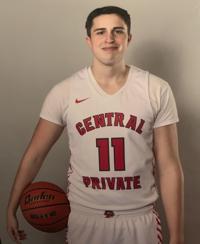 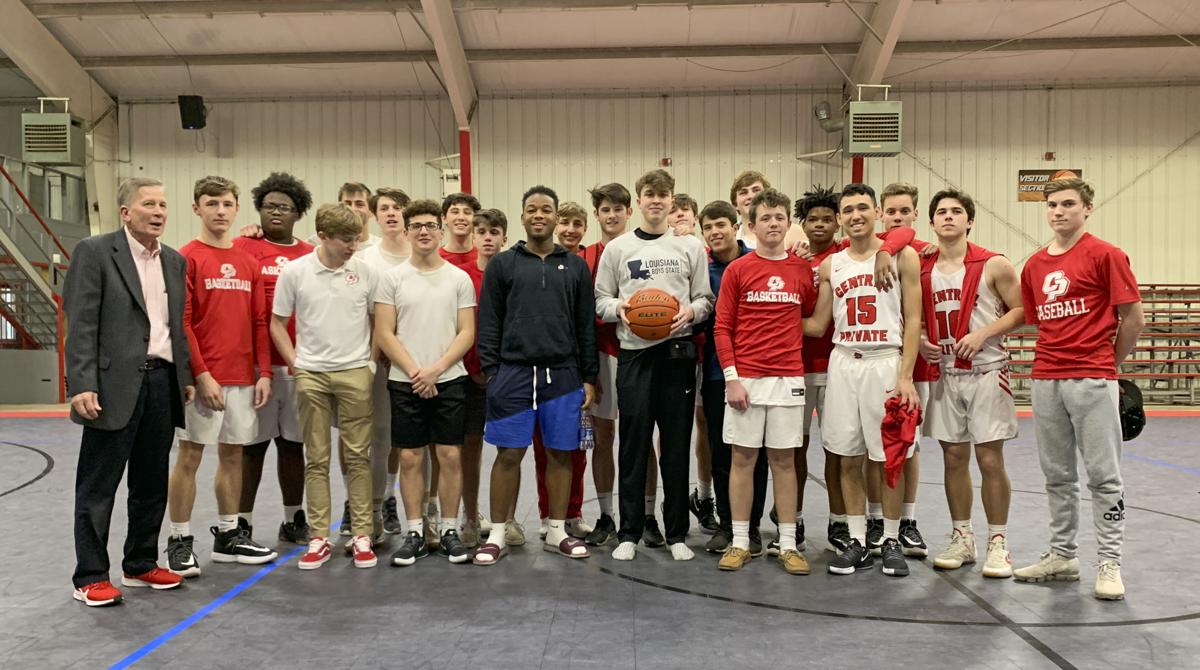 Central Private's Noah Martin, center, stands with his teammates after being given the game ball after making a surprise visit to the team's game victory against Thrive Academy after being released from the hospital. 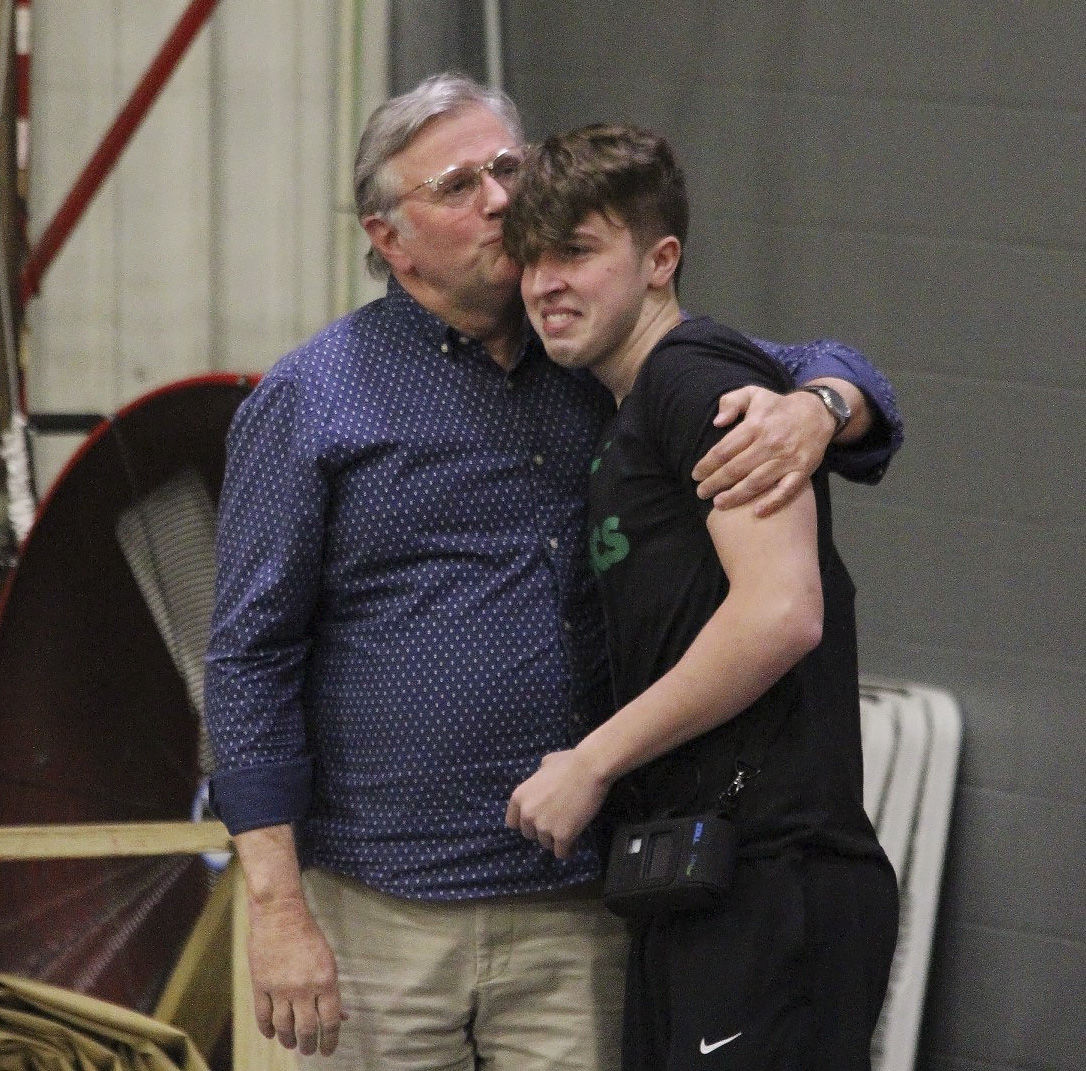 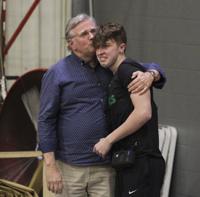 Central Private's Noah Martin, right, with his father, Robert Martin, after making surprise visit to his team's game against Thrive Academy after being released from the hospital.

Central Private's Noah Martin is greeted by teammates after making surprise visit to team's game against Thrive Academy after being released from the hospital.

Central Private's Noah Martin, center, stands with his teammates after being given the game ball after making a surprise visit to the team's game victory against Thrive Academy after being released from the hospital.

Central Private's Noah Martin, right, with his father, Robert Martin, after making surprise visit to his team's game against Thrive Academy after being released from the hospital.

A red Central Private warmup shirt sliced from top to bottom separates the two numbers of the No. 11 that Noah Martin proudly wore. It is a symbol of more than what it took to save the life of a 16-year-old.

The shirt is part of a cultural juxtaposition that may surprise some. And it helps tell the story of a night when two schools with a limited history of playing each other — Southern Lab and Central Private — came together for Martin, who suffered a seizure, then a major cardiac episode.

“We’re keeping that shirt as a reminder of how fortunate and thankful we are,” said Robert Martin, Noah’s father. “They say you never know how people will react when put in a life-or-death situation. There were heroes and angels there with us that night who were placed in our lives."

Three days after the Feb. 4 incident, Noah Martin returned to the Central Private gym just before the fourth quarter of a game against Thrive Academy. He was greeted by cheers from fans and high-fives and hugs from both teams.

The teen has been diagnosed with hypertrophic cardiomyopathy — the same genetic disorder that has claimed the lives of three local athletes since 1996. And others, like college basketball star Hank Gathers.

“The whole thing is surreal to me … just the way it happened,” Southern Lab Director Herman Brister Jr. said a day later. “The life of a child is so precious. And to save the live of a child I think is something I hope any of us would step in and do. I’m so thankful we had the resources and personnel to help.”

Southern Lab was leading at halftime and CPS coach Gary Duhe was going over game plans in the locker room. He had specific instructions for Martin, a 6-foot-3, 190-pound junior.

“I flash into the post,” Martin repeated. Duhe turned his back and pivoted to turn back around in time to see two CPS players catch Martin, who had begun having a seizure.

It was the first seizure Martin had suffered in nearly five years, his father said.

Duhe, whose own son suffered from seizures, knew what to do. He sent for Dr. Kyle Dean, the team physician and a former Central Private player, and Robert Martin, who is also the acting director at CPS. Melissa O’Neal, a nurse and CPS parent, came in later.

Dean told Duhe to take the other players out for the second half. Robert Martin recalled his son’s body went cold and his skin looked ashen. Noah Martin had stopped breathing.

“I called 911, ran into the gym and screamed that we needed help,” Robert Martin recalls. “It was the only thing I knew to do.”

And the game stopped.

“I’ve been a team doctor for more than 20 years and never faced a situation like that,” Dean said. “I am so thankful that Southern Lab had the AED device on site and accessible. And thankful for the help those folks provided.”

Augustine and SLHS football coach Darrell Asberry dashed to a nearby office to retrieve the defibrillator/AED the school purchased by selling popcorn and cases of Coca-Cola products in 2012.

Asberry, a former Southern Lab and Jackson State quarterback, raced back to the locker room with the AED ahead of Augustine between two or four minutes after Robert Martin’s call for help.

Augustine was trained to use the device and taught CPR by Dr. Rani Whitfield in 2012. It was the first time he had to use an AED.

“My mother used to always say, ‘Do your job, you don’t have time to be nervous,’ ” Augustine said. “My mind was clear … it was blank. I listened to the count they (nurses, Cullins) gave us. We had to place our hands in the right place. That young man was counting on us.”

Asberry added, “We had an angel on our shoulders.”

As the work by Dean and others became more intense, Southern Lab basketball coach Jamar McKnight guided a distraught Robert Martin, also the pastor of Central Hope church, out of the locker room and began praying with him.

Soon, they were joined by four to six other SLHS staff members/parents. The gym was somber as fans and parents huddled together. McKnight saw his team gather in a corner to pray.

It was another surreal sight. Central Private and Southern Lab together.

CPS is a first-year LHSAA school and was a longtime member of the Mississippi Private School Association and Louisiana Independent School Association. Both groups offered sports/education alternatives once Louisiana’s public schools were integrated. Of course, SLHS is the lab school of Southern, the nation’s largest historically black college/university.

“At that moment, I went into dad mode as if this was my child,” McKnight said. “My heart went out to him. He (Robert Martin) needed our support and so did their team and fans. This was bigger than a basketball game.”

Within 15 minutes of when the cardiac episode began, an ambulance transported Noah Martin to the new Our Lady of the Lake Children’s Hospital. He was transferred Oschner medical center in New Orleans.

By Wednesday afternoon, the teen was playing video games with his father, a sight that amazed the first doctor who treated him.

Echoes from the past

Learning about Noah Martin’s story is exciting and bittersweet for Jim Cobb. His oldest son, Burke Cobb, was a 14-year-old freshman-to-be at Dutchtown High in 2012 when he collapsed during a pickup basketball game that followed a preseason football conditioning practice.

“Of course, part of me wishes it had been my son. But to hear this young man’s story … it is amazing,” Cobb said. “It’s wonderful to see a young person who survived this. It shows the work we’re doing has made an impact.”

Burke Cobb is one of three local athletes who died a sudden-cardiac deaths because of hypertrophic cardiomyopathy. Glen Oaks girls basketball star Shannon Veal (2008) collapsed during a playoff game. Chrissy Martin (1996) was a girls post player at Woodlawn who appeared ready to move to an elite level. She was playing basketball with a younger sibling in the family’s driveway.

All three families have worked to raise awareness of sudden-cardiac death for teens.

The Cobb family started its Living4Burke Foundation that encourages cardiac screening for athletes, along with the purchase/accessibility of AEDs in schools.

In 2014, the state legislature passed the Burke Cobb Act, making CPR training a requirement for graduating seniors. Jump Start the Heart is among the causes the Veal family has championed.

A bright future and a cause

Noah Martin does not remember much about the night he collapsed in the Southern Lab gym. He is grateful to those who saved his life.

“The last thing I remember is watching the JV game,” Martin said. “I want to thank all the people who helped me that night. I’ve been told about all the things they did for me. It’s a blessing.”

Dean says he hopes his stint as Central Private parent/team physician never includes another situation like Noah Martin’s. Like the Cobb family and others, he advocates training and availability of AED devices at all schools.

“Noah is a walking miracle … other doctors have said it and I believe it,” Dean said. “We need to make sure every school has AED devices and people who are trained to use them.”

An AED device has been donated to Central Private since Feb. 4. Duhe plans to purchase one to take to road games. The Class 1A school will offer cardiac screenings for all its students next week.

Robert and Noah Martin also plan to visit a Southern Lab practice soon to meet with SLHS players and the Central Private fans/team plan to attend as many of the Kittens’ playoff games as possible.

Meanwhile, Augustine and others at Southern Lab have a 2021 plan.

“I plan to go to his graduation,” Augustine said. “As far as we're concerned, he’s a Kitten now too.”