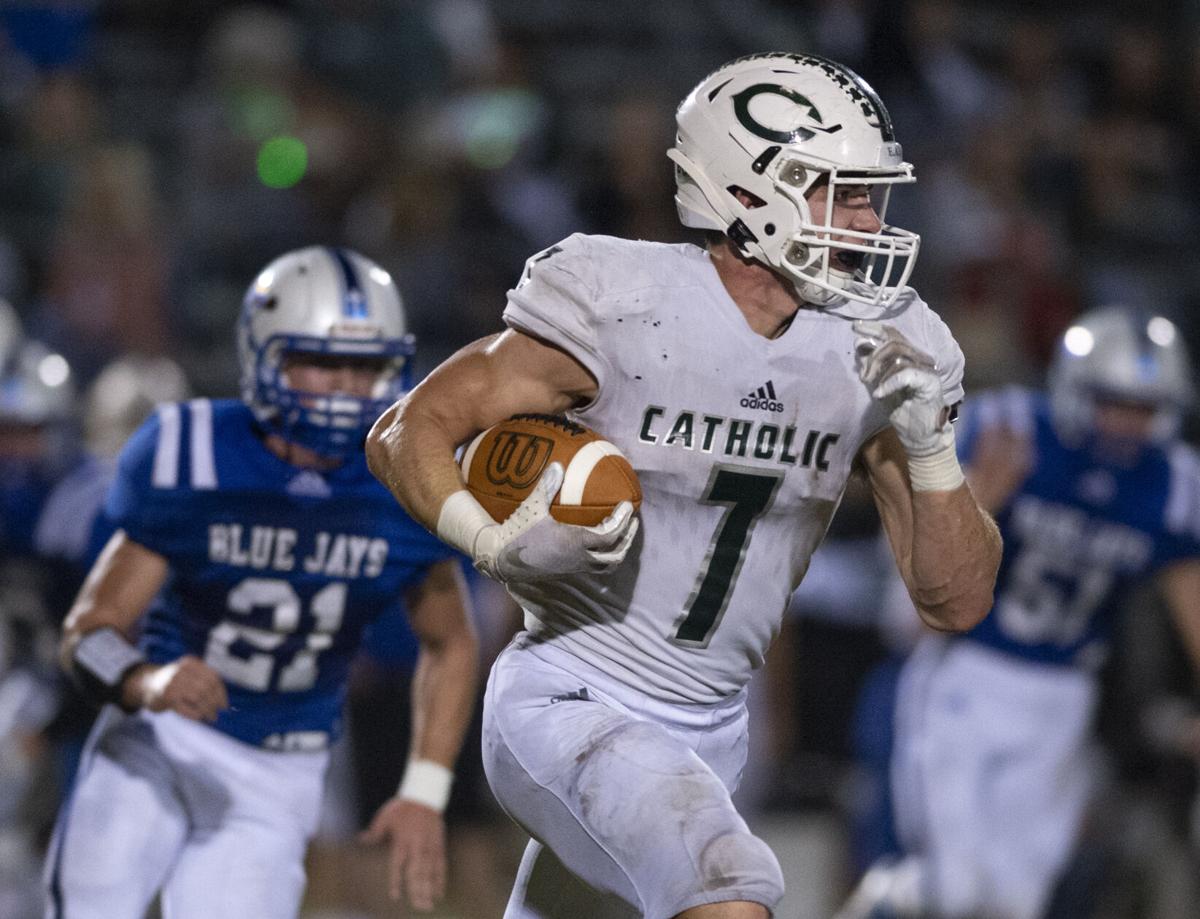 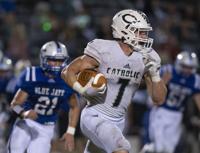 Catholic High's Matthew Langlois (7) runs the ball for big yardage during the Hornets' 35-21 road win over St. Edmund in Eunice on Friday. 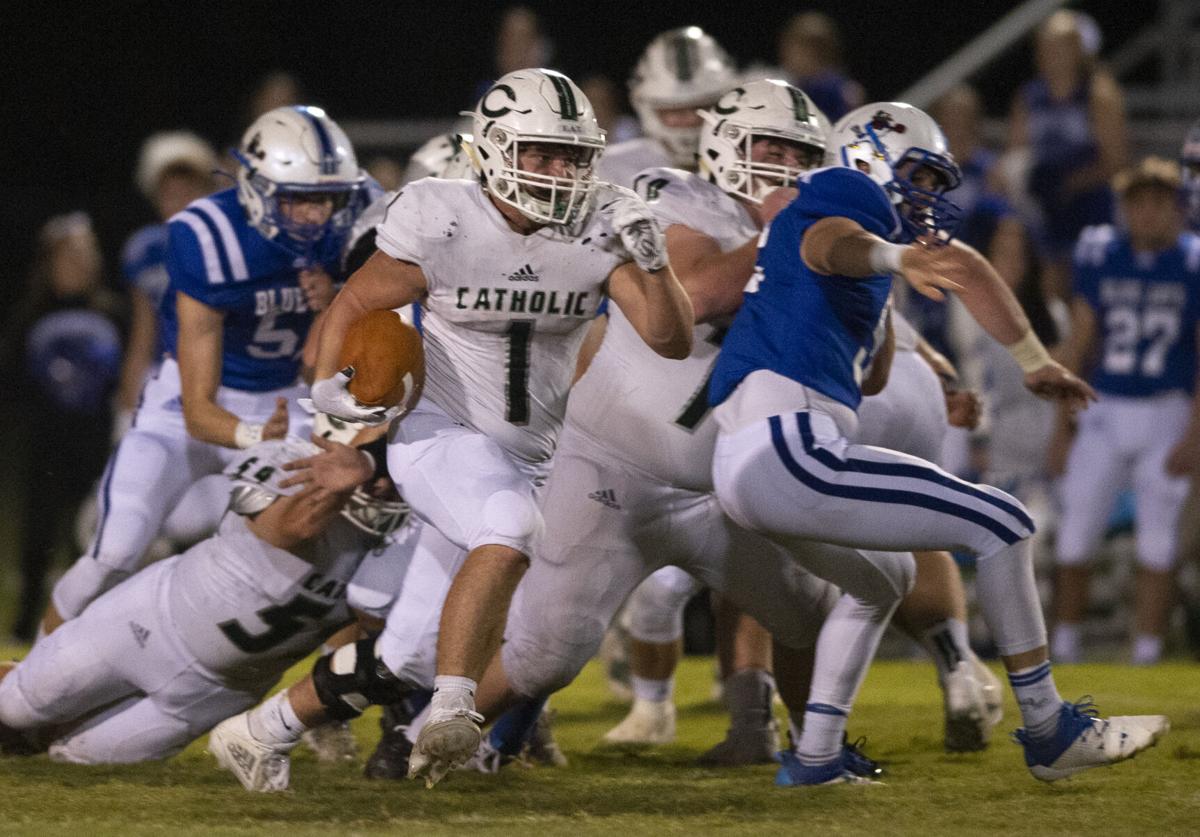 Catholic High's Hunter Beard (1) got the tough inside yards for the Hornets all night en route to rushing for 158 yards in the 35-21 win over St. Edmund in Eunice on Friday.

Catholic High's Matthew Langlois (7) runs the ball for big yardage during the Hornets' 35-21 road win over St. Edmund in Eunice on Friday.

Catholic High's Hunter Beard (1) got the tough inside yards for the Hornets all night en route to rushing for 158 yards in the 35-21 win over St. Edmund in Eunice on Friday.

Don’t tell that to Catholic High of Pointe Coupee and St. Edmund, however, who competed like a regular-season finale for the District 5-1A crown should look.

In the end, Catholic High coach David Simoneaux and his Hornets were all smiles after a 35-21 victory on Friday.

“I’m proud of our kids,” Simoneaux said. “They’re homegrown kids. They don’t look very impressive off the hoof, but they just play so hard. They play for each other.”

“I’ve got to give it to our O-line,” Simoneaux said. “They always just take ball games over. They did a great job of handling their defensive front.”

LSU-bound Matthew Langlois showed why with 152 yards and two scores on 12 carries, in addition to a 30-yard reception.

“I say I’m a great coach when I just call his number a lot more,” Simoneaux said. “He’s a special talent. He’s a humble kid. Playing 130 snaps on both sides of the ball and special teams — not coming off the field — is special.”

The Hornets defense achieved two major goals in helping to produce the victory as well.

First, it was shutting down St. Edmund running back Kieran Davis, who entered the game with 712 yards and seven touchdowns on the season.

“Our kids just love that physicality up front,” Simoneaux said. “They took it as a challenge for a premier back like himself and a big offensive line. Our kids just played with a chip on their shoulder. Even though I thought we could have tackled a little bit better, I really liked the physicality we brought when we arrived at the football.”

The next step was then to contain shifty St. Edmund’s quarterback Henry Brown, who threw for 167 yards and two touchdowns and also rushed for 58 yards.

“(Brown) was the straw that stirred the drink for them,” Simoneaux said. “They couldn’t run the football on us and I thought that guy just did an awesome job of keeping plays alive early.

“Really, I thought that was the key, changing some things up and putting our players in some pressure positions.”

The result was seven total sacks in the game to complement an offense that consistently moved the ball.

Catholic-PC pushed it down the field on all three of its first-half possessions not ended by the clock.

The first one appeared headed for score when Hunter Beard broke loose up the middle for a 45-yard run, but he was tackled from behind and the Blue Jays recovered the fumble at their own 3.

Beard still finished with 158 yards and a score on 21 carries.

Two plays later, Langlois escaped on a 72-yard touchdown run for a 7-0 lead on the final play of the first quarter.

“He’s come a long way,” St. Ed’s coach James Shiver said of Brown. “He started the season as our backup quarterback. Our first-string quarterback on the first play (of season) blew out his ACL.

Henry’s been impressive all season.

“Tonight, Henry was a warrior. He did things I wasn’t used to. I saw him play basketball last year – he was a point guard and he does that on the basketball court. He really looked good tonight.”

The Hornets answered as well, driving 56 yards on eight plays in 2:20 after the Blue Jays failed to recover a short pooch kickoff twice.

Andrew Jewell finished off the scoring with an 18-yard scoring run for a 14-6 lead with 1:46 left until halftime.

The rest of the first half was dominated by Catholic’s defense with five quarterback sacks, including two from Landon Frey.

After the halftime break, the Hornets didn’t waste any time keeping the pressure on the Blue Jays. Overcoming two holding penalties, Catholic drove 53 yards on seven play in 3:54 to claim a two-score lead. Langlois did the honors with a 34-yard touchdown run on fourth-and-9 for the 21-6 lead with 8:06 left in the third.

“We need to be able to hit some spot passes when we get in those (long-yardage) situations,” Simoneaux said. “We did that with that one ball out there to Langlois (for 9 yards) and then we busted the fourth-and-nine.”

The Blue Jays attempted to stay close by reaching the red zone on a 47-yard pass to Taylor Daire to the Hornets’ 12. But Catholic’s defense stiffened with two more sack, including Langlois getting the key one to force the turnover on at the 16 to virtually end it.

Daire returning the ensuing kickoff 99 yards for a touchdown to trim the lead to 35-21 with 3:36 left, but it was too little, too late for the Blue Jays.

“That’s a gritty group (St. Edmund),” Simoneaux said. “I thought those guys did a good job of fighting to the bitter end.”

Like a district title matchup is supposed to be.