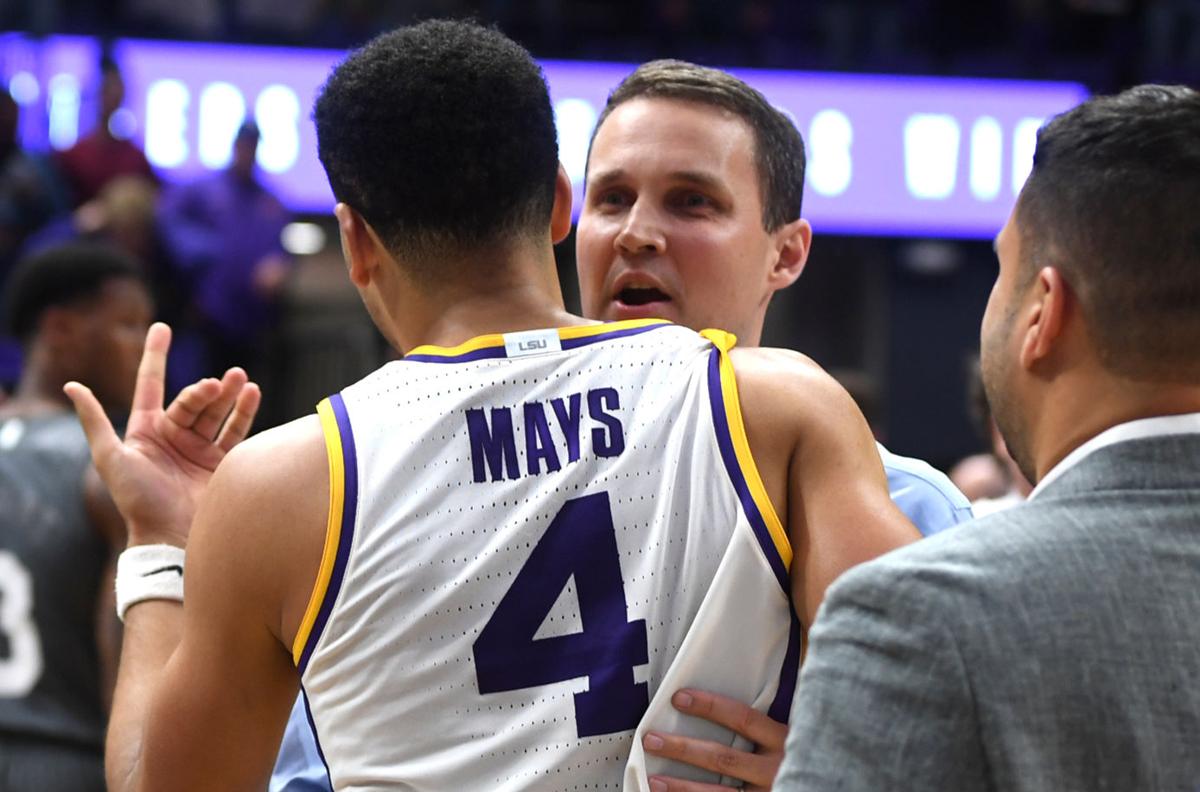 LSU coach Will Wade congratulates Skylar Mays after his last-second field goal gave the Tigers a 60-59 win over Mississippi State on Saturday night in the Pete Maravich Assembly Center. 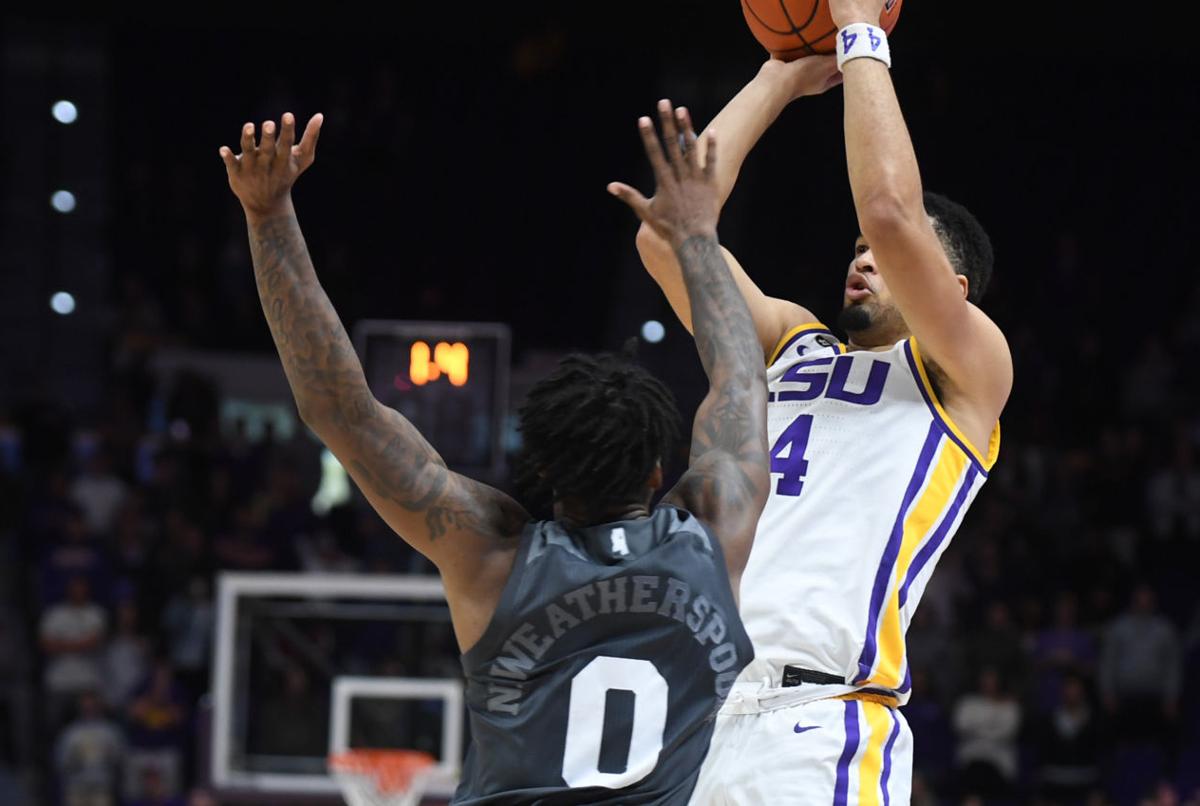 LSU’s Skylar Mays (4) launches the winning shot that beat Mississippi State 60-59 at the buzzer on Saturday night in the Pete Maravich Assembly Center.

LSU coach Will Wade congratulates Skylar Mays after his last-second field goal gave the Tigers a 60-59 win over Mississippi State on Saturday night in the Pete Maravich Assembly Center.

LSU’s Skylar Mays (4) launches the winning shot that beat Mississippi State 60-59 at the buzzer on Saturday night in the Pete Maravich Assembly Center.

As a successful college basketball coach, Ben Howland knew what was coming when LSU, needing to go the length of the court for a game-winning shot, inbounded the ball with 4.6 seconds to play Saturday night.

Howland’s Mississippi State team was in need of a defensive stop to secure a nice road upset after Reggie Perry’s driving layup gave the Bulldogs a 59-58 lead in a tight, hard-fought game.

Even though Howland knew who likely would get the ball, there was nothing he or his Bulldogs could do — despite the best efforts of guard Nick Weatherspoon — to keep Skylar Mays from getting a shot off before the final buzzer.

Mays got the ball anyway on a pass from Charles Manning and quickly raced to the other end of the court despite pressure from Weatherspoon.

After racing across midcourt, Mays used a nifty spin move to get as close as he could before squaring up for a 20-foot jump shot that gave LSU a 60-59 win and touched off a wild celebration in the Pete Maravich Assembly Center.

In a one-point game, a coach can look at any number of things that can turn a potential victory into a loss, but Howland knew exactly where to look.

“The difference in the game was, obviously, a fantastic shot by Mays down the stretch as time expired,” Howland said. “That’s a tough one for us to swallow … a hell of a play by him. He’s a great player, give him credit.”

In recent weeks, LSU basketball coach Will Wade has talked about needing to find a closer for his team in clutch, late-game situations.

In hindsight, Howland said he should have tried to keep the ball out of Mays’ hands, noting the four-year starter was Will Wade’s logical choice to take the shot.

“That’s my fault,” Howland said. “(Mays) was the one guy we thought, (Javonte) Smart would be the other, to push it up. We didn’t want the long pass. He made a hell of a shot because he had to spin and almost lost it.

“Nick did a great job defending him without fouling, so give credit to Skylar. He’s a great player, really good … a special kid.”

“I tried to get in striking distance and get something off,” Mays said. “We only had four seconds left, so I wasn’t sure if I had enough time. … I was lucky to get it in.”

Until his late heroics, Mays had one second-half point in almost 18½ minutes and was just 3 of 10 from the field in the game.

But afterward, Wade said it was going to be Mays or bust, even though he couldn’t come up with late game-tying shots earlier this season against VCU and Utah State.

“Yes, that was it,” Wade said when asked if Mays was the only option.

Coming on: Trendon Watford playing at a high level for LSU basketball team over past three weeks

Statistically, the low point of Trendon Watford’s still-young college basketball career came on the evening of Dec. 18 in LSU’s head-scratchin…

Manning and Emmitt Williams said after the game they never practiced the play and that Wade drew it up in the huddle following Perry’s basket.

“Even though we haven’t worked on it, it was a play I’ve written down 100 times (on his play card),” Wade said. “There’s basically not a whole lot to it. We curl and get the ball to the best player and everybody gets out of the way. He has to go make a play in space.

“It was very good timing by Skylar to understand the time and score, and how much time he had.”

Yet, it could have easily been Mississippi State’s game.

The Bulldogs led 53-44 with 5:18 left, but the Tigers’ defense tightened and allowed just six points the rest of the way while Williams kept his team in it offensively with 15 of his team’s 30 second-half points.

While he was happy, Wade was far from overwhelmed by his team’s overall performance.

Mays’ shot, the defensive effort and Williams’ production were just enough to help LSU get over the top when the Tigers were out-rebounded 48-31, shot just 37.3% from the field and were 14 of 23 from the free-throw line for a season-low 60.9%.