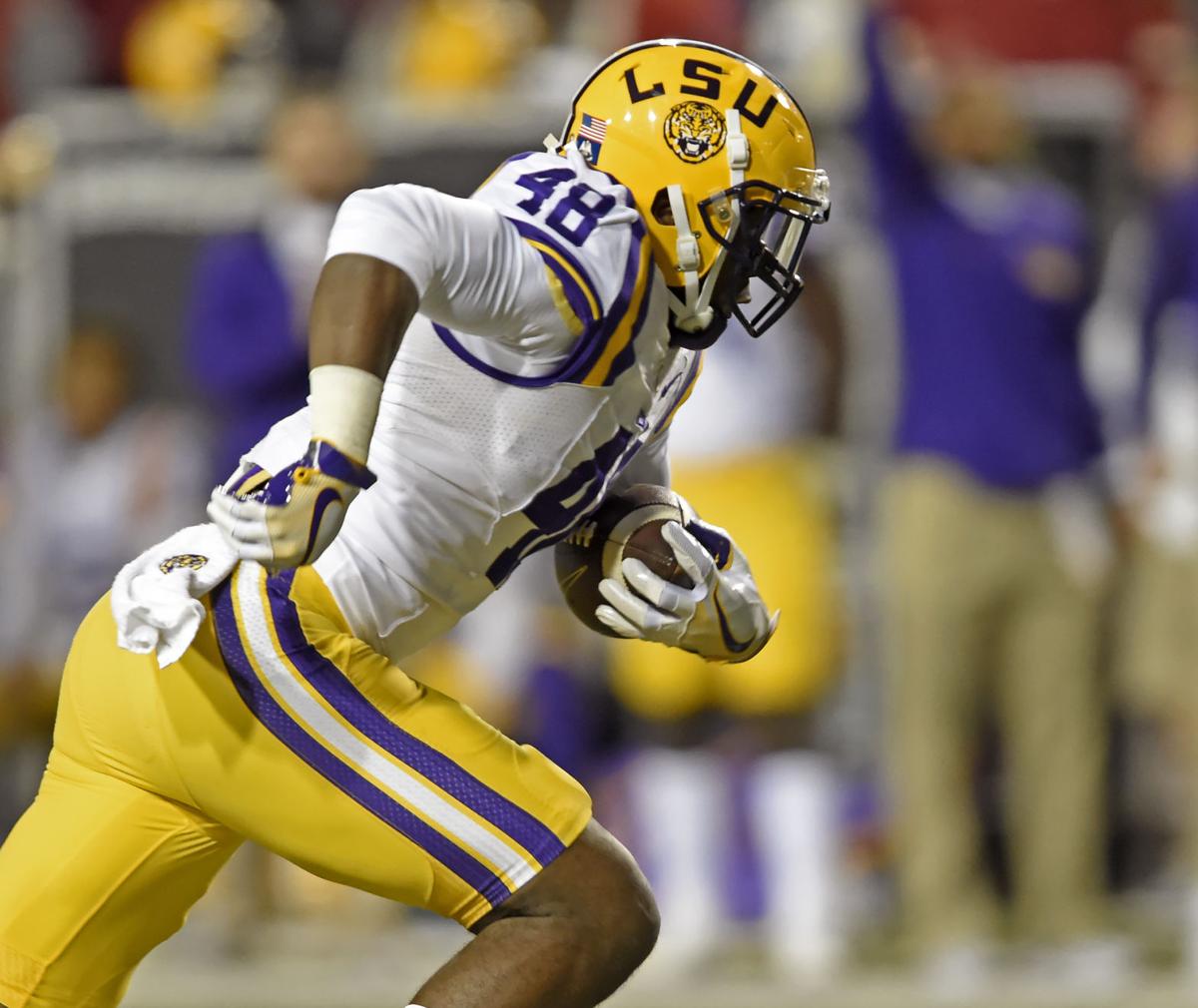 LSU linebacker Donnie Alexander (48) runs with the ball after the interception he just made during the first half of the LSU-Arkansas football game Saturday Nov. 12, 2016, at Reynolds Razorback Stadium. 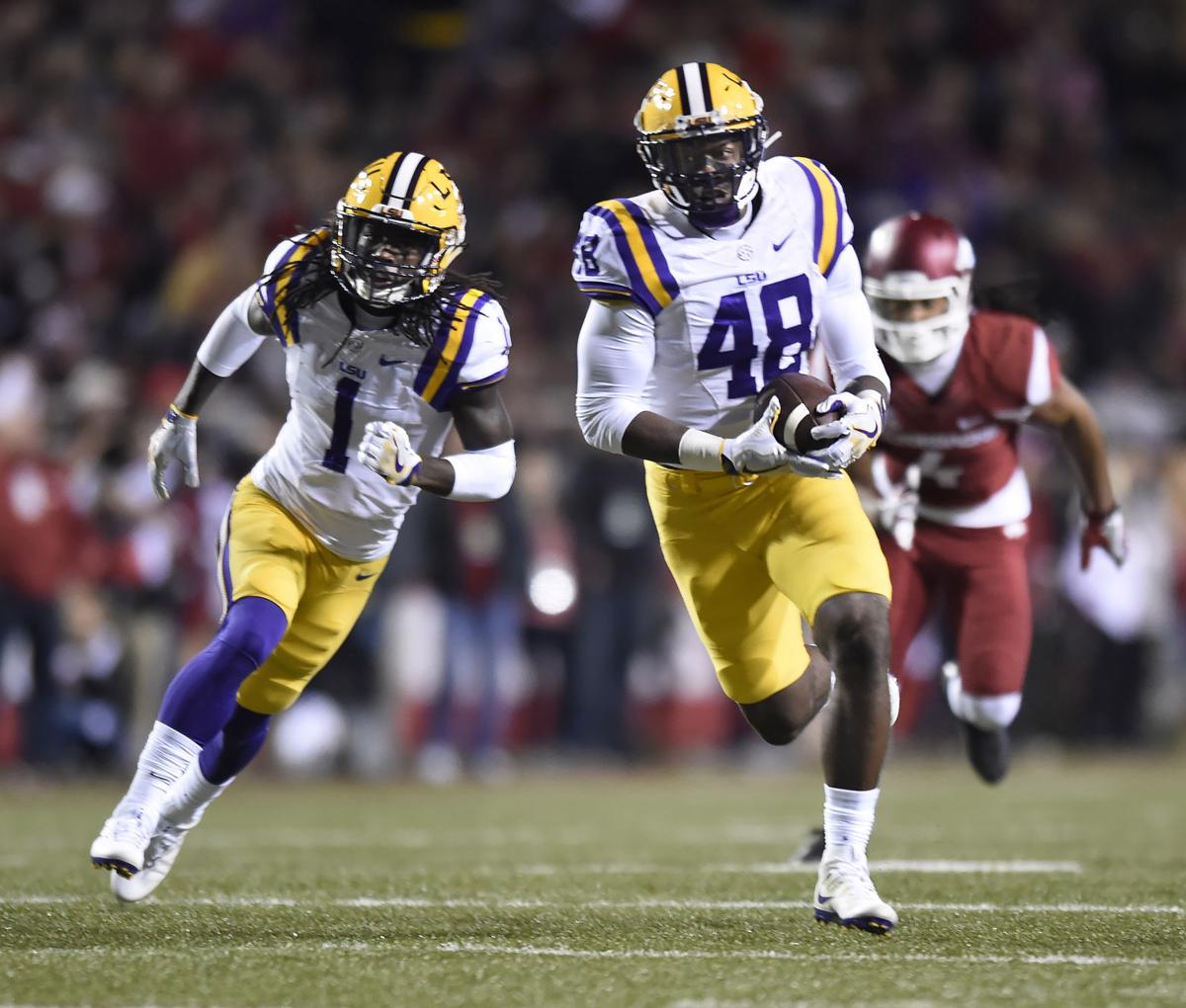 LSU linebacker Donnie Alexander (48) pulls from defenders after intercepting in the first quarter during the the LSU-Arkansas football game Saturday, Nov. 12, 2016, at Reynolds Razorback Stadium, as LSU defensive back Donte Jackson (1) follows. 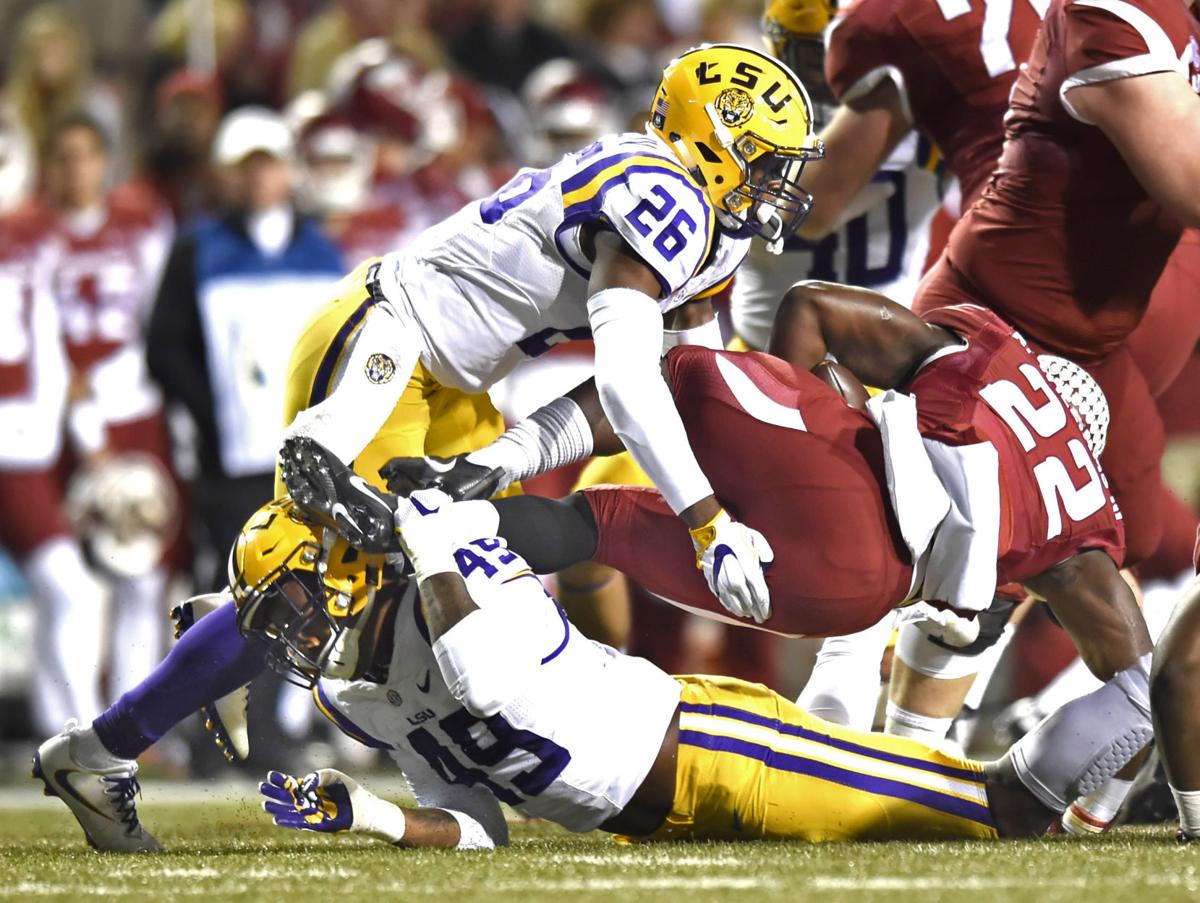 LSU linebacker Donnie Alexander (48) runs with the ball after the interception he just made during the first half of the LSU-Arkansas football game Saturday Nov. 12, 2016, at Reynolds Razorback Stadium.

LSU linebacker Donnie Alexander (48) pulls from defenders after intercepting in the first quarter during the the LSU-Arkansas football game Saturday, Nov. 12, 2016, at Reynolds Razorback Stadium, as LSU defensive back Donte Jackson (1) follows.

FAYETTEVILLE, Ark. — After trailing 21-0 late in the second quarter of Saturday night’s game with LSU, Arkansas appeared to be on the verge of climbing back into it early in the third period.

It certainly looked pretty good for Arkansas, which had all the momentum after scoring its first touchdown with 5:52 to play before halftime and then forced a Leonard Fournette fumble on LSU’s first possession of the second half.

At that point, however, LSU’s stifling defense — and Fournette and fellow running back Derrius Guice — made sure it wouldn’t happen.

The defense stood tall and held Arkansas to a field goal after Fournette’s miscue, the then shut down the Razorbacks’ offense with three consecutive three-and-outs to spark a 38-10 blowout in Reynolds Razorback Stadium.

In the four possessions after Fournette’s fumble, Arkansas ran 13 offensive plays. But the Razorbacks didn’t have much to show for it when they netted just 25 yards with one first down and a 24-yard field goal.

“There’s no question that the guys set their jaw and had some resolve about them,” LSU interim coach Ed Orgeron said of the key defensive sequence in the third quarter. “Our defense wasn’t going to let them turn the tide of the game. … No way.”

Not even a muffed punt by Tre’Davious White in that same stretch of the game, which gave Arkansas another shot at a touchdown on LSU’s side of the field, could get in the way of the Tigers’ defense.

“We know in games that eventually there’s going to be sudden change,” inside linebacker Duke Riley said of the first fumble. “We went back out and wanted to come out on top, and that’s what we did.

“We didn’t even want to give up a field goal. But we regrouped, and that was definitely a big momentum change.”

“As a defense, we have to be prepared for that,” he said. “When you have sudden change, you try to hold them to a field goal.”

They did one better, when, after a three-and-out, White fumbled a punt right back to Arkansas.

Three plays netted minus-5 yards with the big play there being a solid hit by free safety Jamal Adams on tight end Jeremy Sprinkle. Sniffing out a screen, Adams timed the play perfectly and turned it into a 6-yard loss to bring up third-and-15 — which led to an incompletion.

“Coach ‘O’ tells us all the time that big plays fuel emotion,” LSU defensive tackle Greg Gilmore said. “We have to keep making plays and we did, especially in the red zone.”

“That’s what we do,” cornerback Dante Jackson said. “We had to get the momentum back. Arkansas had it and then we had to swing it back to our side by holding them out of the end zone.”

While the Tigers’ defense settled things down during that stretch, Fournette, Guice and the offensive line helped out.

Fournette came back from his fumble with a 3-yard touchdown run, his third of the game, to give his team some breathing room at 28-10 and Guice ripped off a 96-yard scoring run en route to a career-high 252 yards on 21 carries.

Guice also did much of the work with 65 rushing yards on a drive that ended with Colby Delahoussaye’s 19-yard field goal just before Guice broke off the longest play from scrimmage in school history to finish off the Razorbacks.

LSU finished the game with 390 rushing yards on 51 carries. In addition to Guice’s big night, Fournette picked up 98 yards on 17 carries before re-injuring his ankle late in the third quarter.

But the defense also did its job after giving up only its 10th touchdown of the season in the second quarter on a 44-yard TD pass from Austin Allen to Dominique Reed.

LSU held Arkansas to three plays or less on eight of 13 drives and limited them to 291 yards — including just 159 yards in the first three quarters.

As a bonus, the Tigers had three takeaways.

Linebacker Donnie Alexander had an interception in the second quarter that led to the second of Fournette’s three rushing touchdowns and cornerback Dwayne Thomas had one to end a scoring threat.

LSU also came up with a fumble late in the game when Arkansas desperately tried to score another touchdown, but Devwah Whaley fumbled into the end zone and Beckwith recovered to ice the victory.

“Everybody just had to do their assignment,” outside linebacker Arden Key said. “They had a little momentum, but we all did our assignments and we took the momentum back from them.”

Scott Rabalais: Can Ed Orgeron change the culture at LSU? So far, it's an emphatic 'yes'

FAYETTEVILLE, Ark. — They were tired and they were cold, but when the clocks in Razorback Stadium showed all zeroes, they sprinted across the …