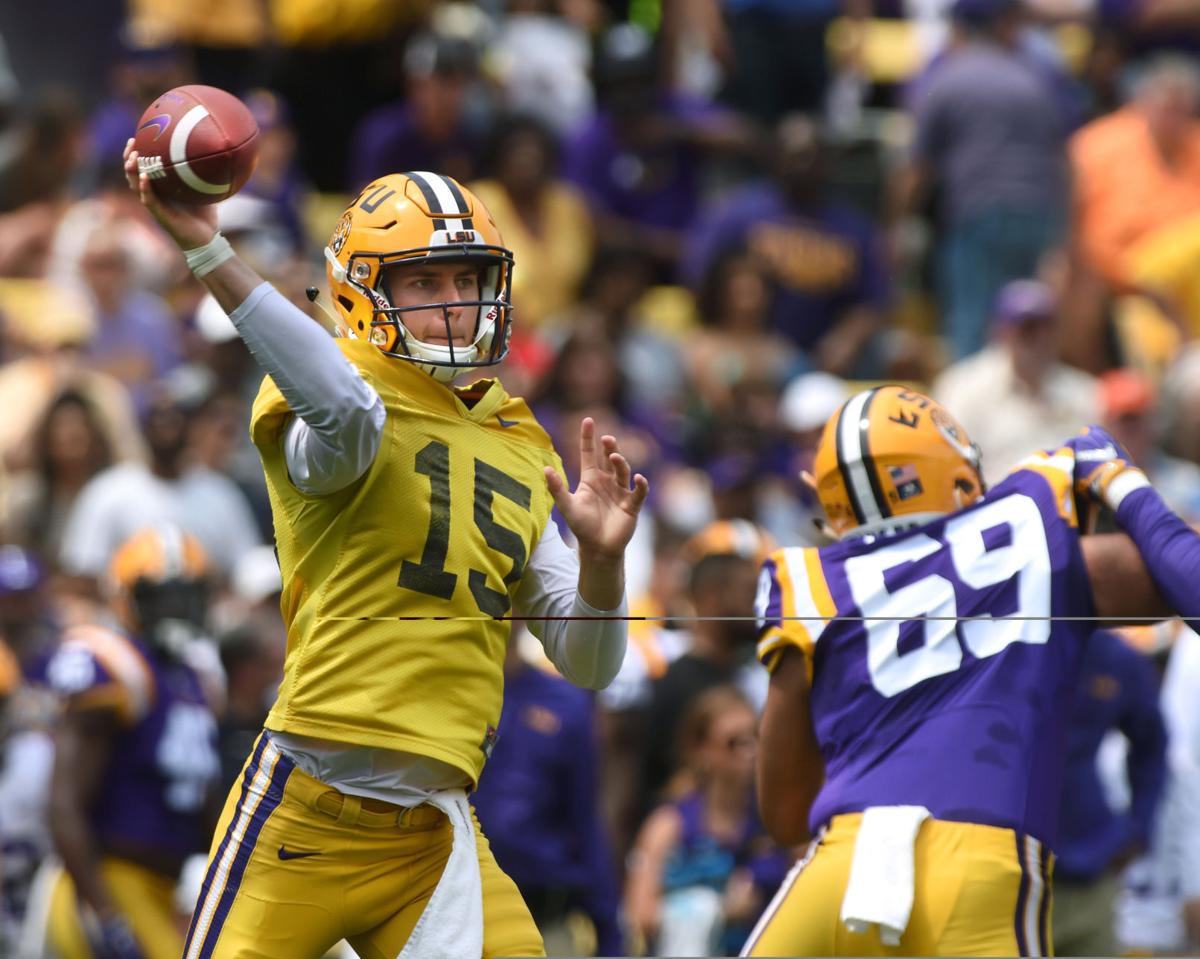 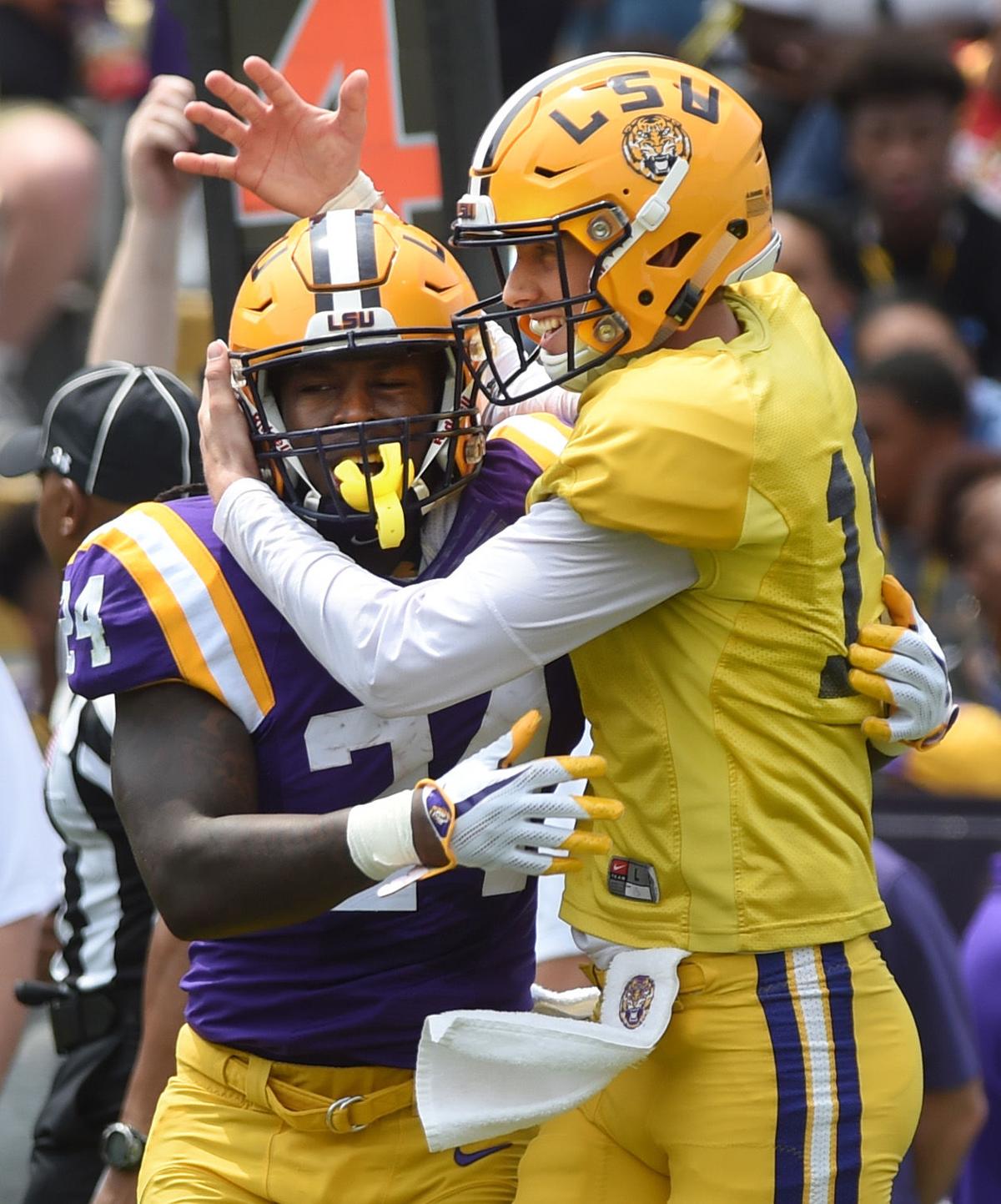 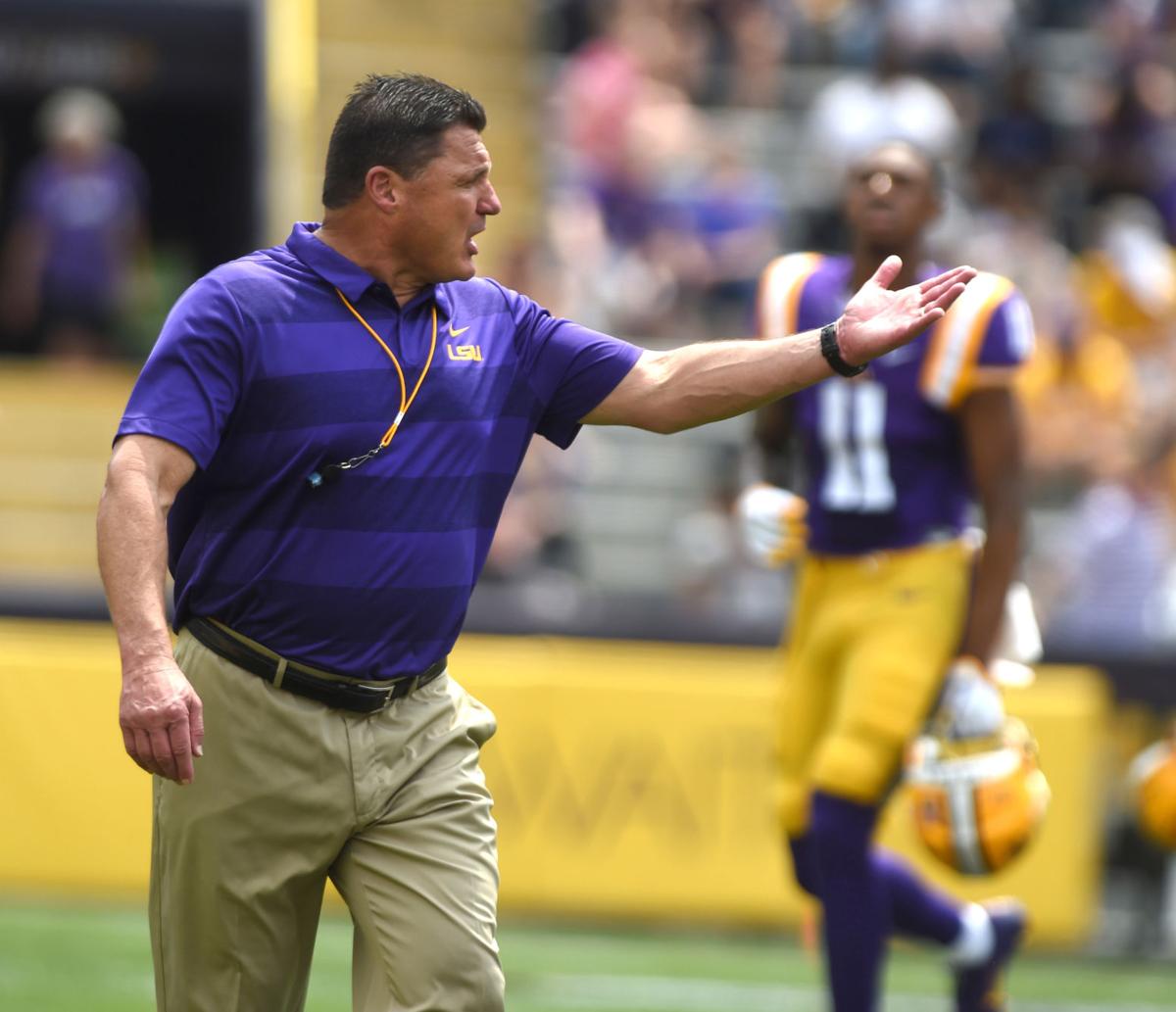 LSU coach Ed Orgeron talks to players as they come off the field after a series during the spring game in Tiger Stadium on Saturday, April 6, 2019. 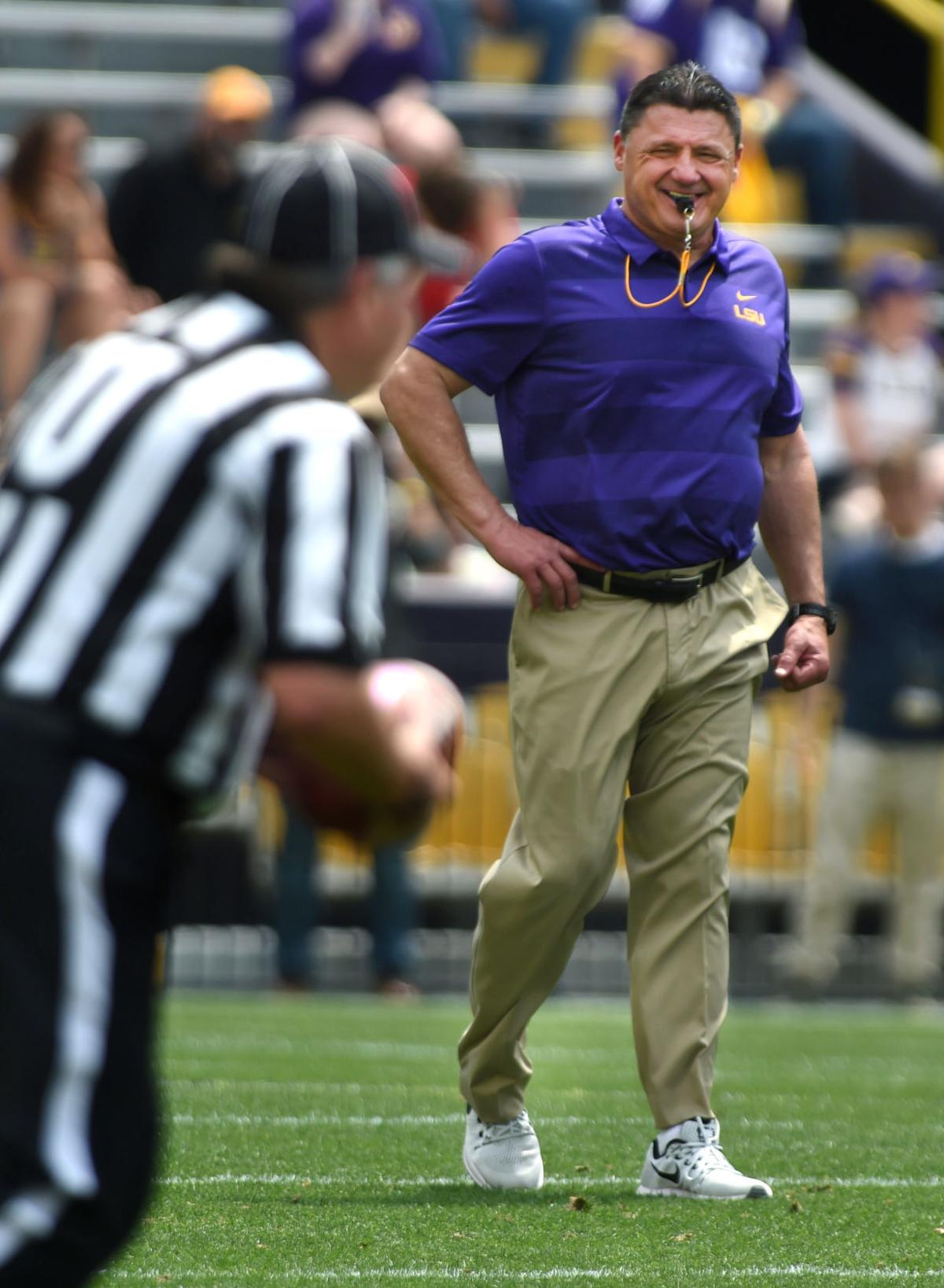 Head coach Ed Orgeron smiles at an official after the end of a series Saturday, April 6, 2019 at LSU's annual scrimmage to end spring football practice.

LSU coach Ed Orgeron talks to players as they come off the field after a series during the spring game in Tiger Stadium on Saturday, April 6, 2019.

Head coach Ed Orgeron smiles at an official after the end of a series Saturday, April 6, 2019 at LSU's annual scrimmage to end spring football practice.

As soon as LSU fullback Tory Carter got split out to the sideline as a receiver, it was clear the Tigers had committed to a new style of offense.

Yes the offense — that pesky portion of play that's been under construction for quite a while in Baton Rouge. It may have been under heavy seal during Saturday's spring game at Tiger Stadium, but there were still plenty of noticeable changes under offensive coordinator Steve Ensminger and newly hired passing game coordinator Joe Brady.

Those four- and five-receiver sets that LSU coach Ed Orgeron has been talking about for more than a year? They were on display during the 85-play scrimmage, in which the Purple Team beat the White Team 17-14, and at times the offense was exactly as Orgeron has said he wants it: fast, upbeat and efficient.

LSU football returns to action with the 2019 Spring Game, and The Advocate will have live coverage throughout the game.

Within the first two drives of the scrimmage, returning starting quarterback Joe Burrow was 7 of 10 passing for 75 yards, and backup Myles Brennan was 8 of 9 passing for 103 yards — a combined 79 percent completion rate that would be a stark improvement from Burrow's numbers last year (57.8 percent).

"I think we're very far advanced than we've ever been since I've been here," Orgeron said.

And within those first few drives, the LSU wide receivers rotated across new spots all over the field.

Tight end Jamal Pettigrew, who had his first game action since suffering a torn ACL last summer, was split all the way to the sideline on one play. Starting running back Clyde Edwards-Helaire lined up as a slot receiver, creating the five-receiver look Orgeron had been pushing for.

"I think we're way ahead of where we were when I got here last year," Burrow said. "We're going to keep building on this, keep expanding on these packages. We're excited about going into the year."

And there were some fireworks.

Burrow scrambled and threw a 10-yard touchdown to Justin Jefferson in the back of the end zone; Brennan fit a 44-yard deep pass straight into the hands of McMath; and running back Chris Curry had nine carries for 55 yards and two touchdowns, including a bruising, highlight reel-steamroll of safety Kenan Jones on a 22-yard run.

Dee Anderson caught a short crossing route from Brennan and turned upfield for a 41-yard reception. The 6-foot-6, 229-pound senior led the scrimmage with six catches for 102 yards.

"That's the thing about us," said Burrow, who completed passes to six receivers. "You can't double-team one guy. There's going to be another guy who beats you. ... We can be explosive. We can be dangerous. We just need to keep building on it."

It's only the spring game, but LSU quarterback Joe Burrow is already making highlight reel-worthy plays.

True freshman Derek Stingley Jr., the nation's No. 1 overall recruit, according to Rivals, also lived up to the early hype, leaping and fighting against wide receiver Terrace Marshall on a deep pass attempt that resulted in Stingley's first interception in front of a public audience.

But some issues remained.

Tight end Stephen Sullivan dropped two passes, including one on third down, and the offensive lines allowed a combined seven "sacks" — a number that was slightly inflated because quarterbacks only needed to be touched by defenders.

Starting center Lloyd Cushenberry said at the start of spring practice that the line had committed to fixing its protection issues last year, when the Tigers ranked 106th nationally with 35 total sacks allowed.

Most of the sacks were protection breakdowns, and Orgeron said the four total sacks allowed in the second half were "too many." But some of them rested on Burrow.

When the first team was running a two-minute offense at the end of the scrimmage's first half, Burrow was sacked on second-and-6 at the defense's 9.

Kickoff specialist Avery Atkins, whom Orgeron said began kicking field goals this spring to develop his skills, then pushed a 33-yard field-goal attempt wide right to end the half. Connor Culp later made a 42-yarder.

The sack and missed field goal highlighted a major red-zone issue that occurred throughout last season, when LSU ranked 119th nationally with a 51.67 touchdown conversion rate inside the 20.

All aboard the Derek Stingley Jr. hype train!

There were also issues protecting the football: Running back Clyde Edwards-Helaire fumbled on his first carry, a turnover that was forced by Michael Divinity, who moved to inside linebacker last week.

That, paired with a muffed snap to Brennan, was among the spring-game gaffes that will need to disappear by the season opener against Georgia Southern on Aug. 31.

Until then, the Tigers will enter the summer offseason with plenty to work on.

"We're going to keep building on our packages, getting our playmakers in space," Burrow said. "(We're) installing a bunch of new stuff. We'll have a whole summer to do it, and another 30 practices before the next game."

LSU coach Ed Orgeron spoke often about the team's struggles in the trenches during the 2018 season.

What's ahead for LSU offseason football? Some questions following the Tigers spring game

When the crowd filtered out of Tiger Stadium on a sweaty, sweltering Saturday, live-action LSU football left with it.

FLOWER MOUND, Texas — Marcel Brooks sits down in the Marcus High coaches office and rubs his arms, still sore from his workout the night before.

Joe Burrow on LSU's offense after spring game: 'We're way ahead of where we were last year'

Is LSU's offense more advanced than they were last year after Saturday afternoon's spring game showcase?