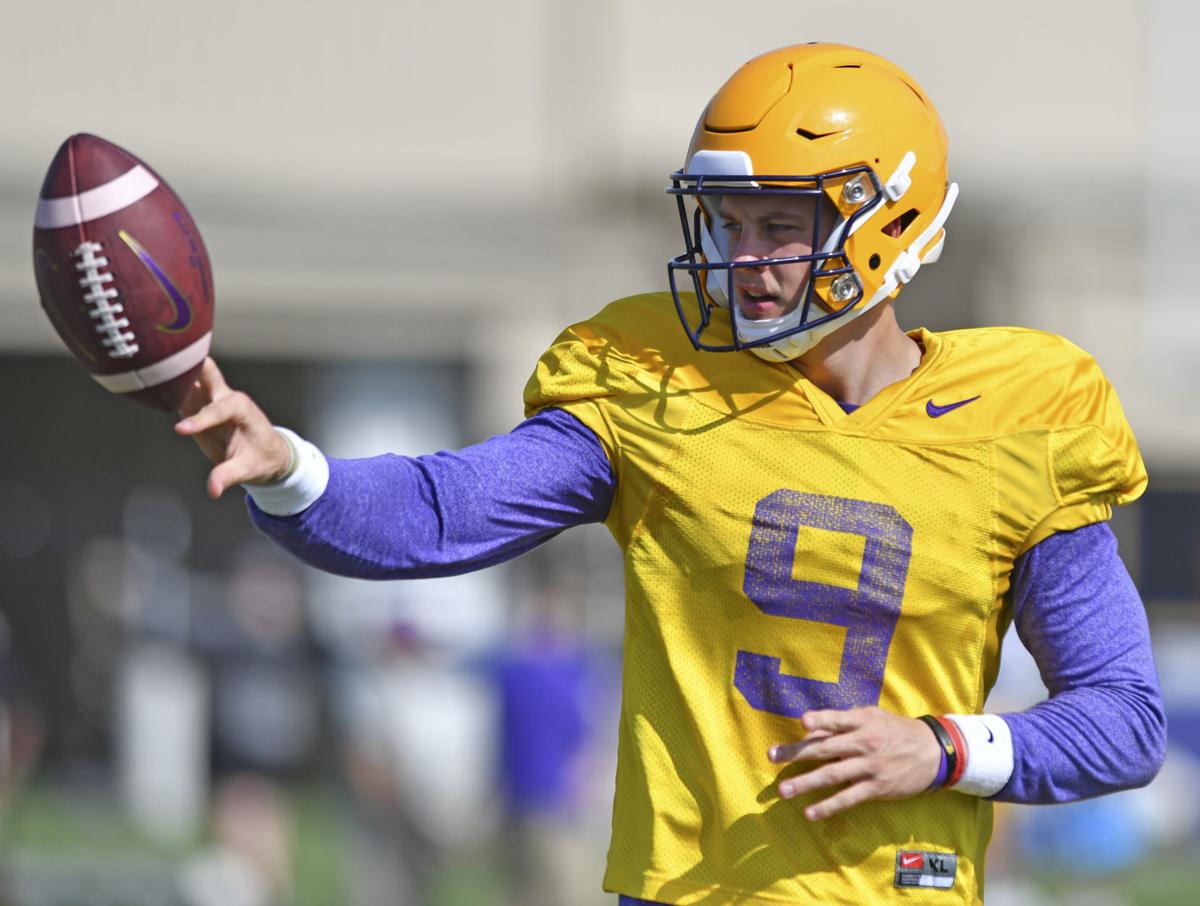 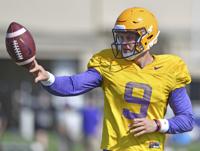 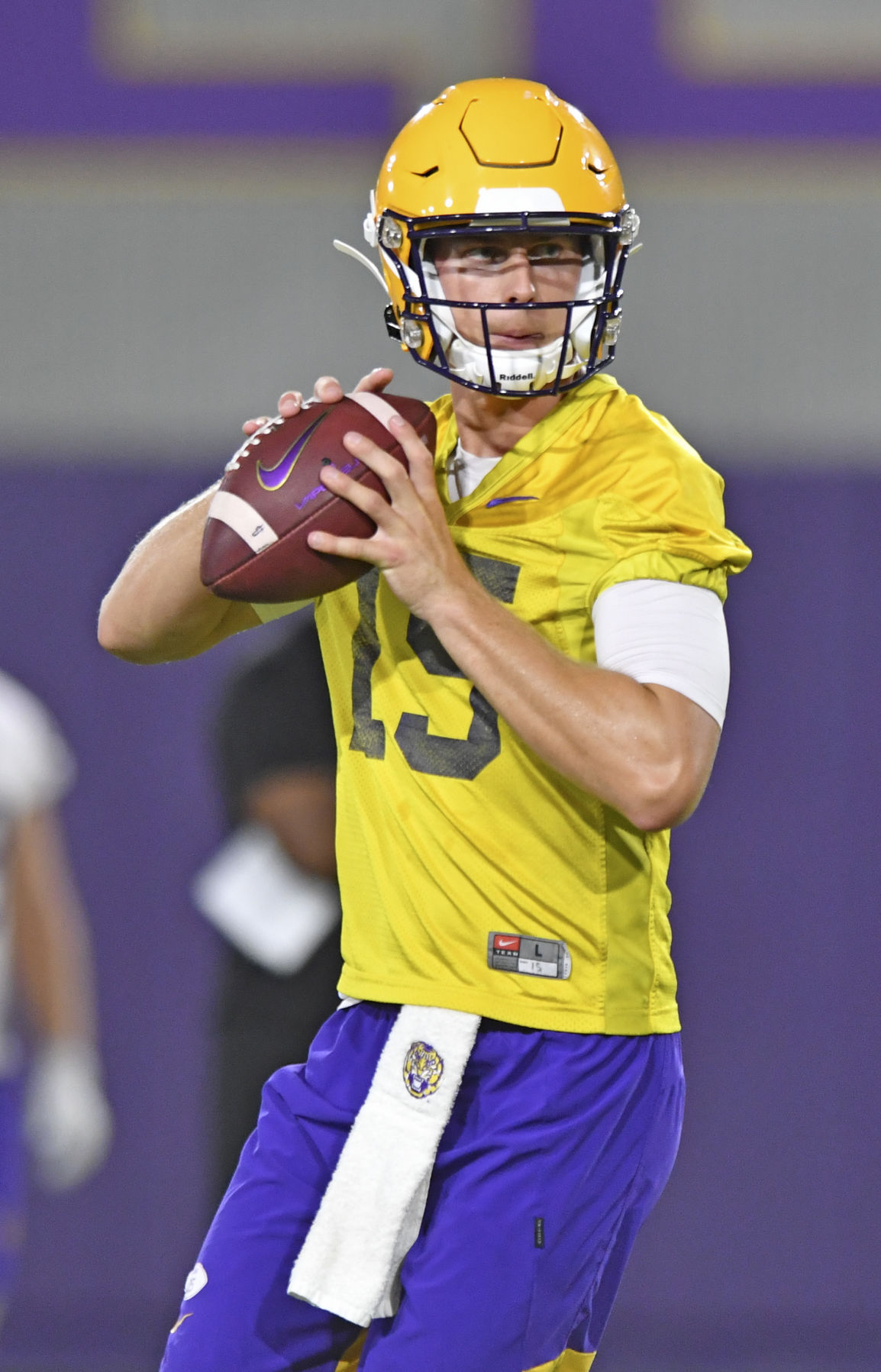 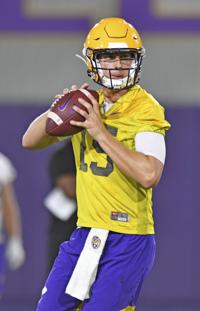 LSU quarterback Myles Brennan (15) drops back on the pass as the Tigers practice indoors, Friday, August 9, 2019 on LSU's campus in Baton Rouge, La.

LSU quarterback Myles Brennan (15) drops back on the pass as the Tigers practice indoors, Friday, August 9, 2019 on LSU's campus in Baton Rouge, La.

Senior quarterback Joe Burrow was absent during the open viewing portion of LSU football's practice on Friday, adding to a list of starters who have not practiced this week.

Burrow, the 2019 Fiesta Bowl offensive player of the game, accounted for 3,293 total yards and 23 touchdowns last season. LSU wants to use Burrow as a runner more in its new run-pass option offense, and head coach Ed Orgeron has said Brennan will play at "significant times" this season.

"Joe’s having an excellent camp," Orgeron said Tuesday. "So is Myles."

The Tigers, who returned after an off day, practiced without pads as they prepared for their first preseason scrimmage on Saturday.

LSU's Saahdiq Charles, latecomer to left tackle, is prepared for a breakout season

Ed Orgeron called his 20-year-old offensive tackle into his office and flipped on the film.

Senior defensive lineman Rashard Lawrence, who has received days off as he returns from offseason knee surgery, practiced for the first time since Monday.

Freshman cornerback Derek Stingley and freshman running back John Emery also returned to the field. So did defensive end Glen Logan, who started 10 games last season. They had all missed Wednesday's practice.

Freshman offensive lineman Kardell Thomas practiced in a gold, non-contact jersey. He had not practiced since Sunday. Thomas, who ran with the second-team offense the first two days of preseason camp, was ranked the No. 4 guard in the country for the 2019 recruiting class.

Sophomore offensive guard Chasen Hines practiced for the first time since Monday. Orgeron said Hines had been limited with a lingering knee injury.

LSU walk-on lineman Michael Smith, who has recently been taking second team snaps at center, has been placed on scholarship.

"Camp injuries," Orgeron said Tuesday. "Sprain here. Sprain there. Nothing that's going to keep somebody out too long."

On offense, lineman Charles Turner did not practice Friday. He's expected to return in about a week.

Stephen Sullivan once slept under a highway bridge and bounced around homes throughout his adolescence, unable to find stability until high school. Last week, the tight end graduated from LSU, making him the first college graduate in his family.

Freshman wide receiver Devonta Lee did not attend his second straight practice. Lee was the No. 8-ranked athlete in the last recruiting cycle, according to 247Sports.

Anderson is "suspended from all team activities" until he passes conditioning, Orgeron said. Palmer, who checked into camp with a knee brace, is out for the early portion of preseason practice.

Junior tight end Jamal Pettigrew has still not arrived, and Orgeron said Tuesday he did not know "exactly when he's going to come back." Pettigrew later wrote on Twitter he had a "minor" injury.

The pile of LSU player absences grew Wednesday afternoon at the Tigers' sixth practice of preseason camp, and it included two of the program's…