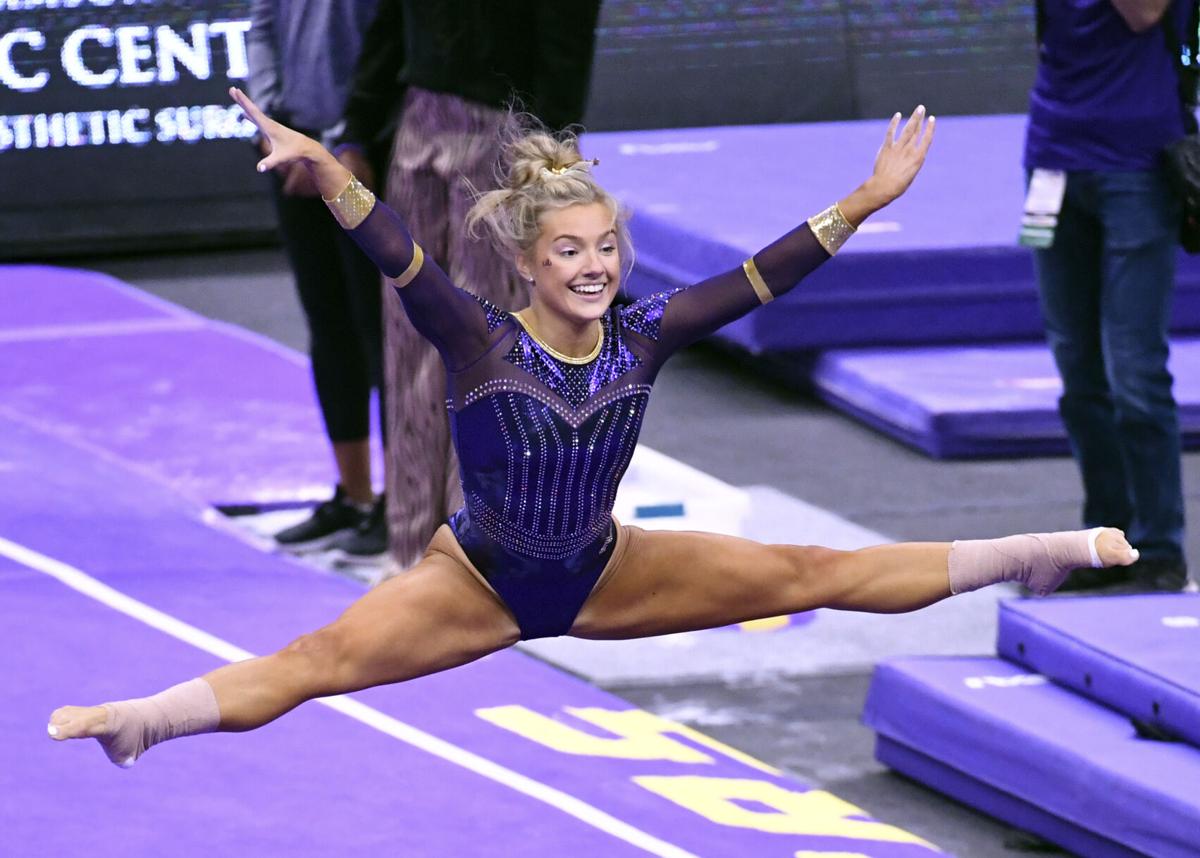 LSU senior Sarah Edwards performs her floor routine against Georgia, Friday, January 22, 2021, at the Pete Maravich Assembly Center. Edwards won the event with a score of 9.925. 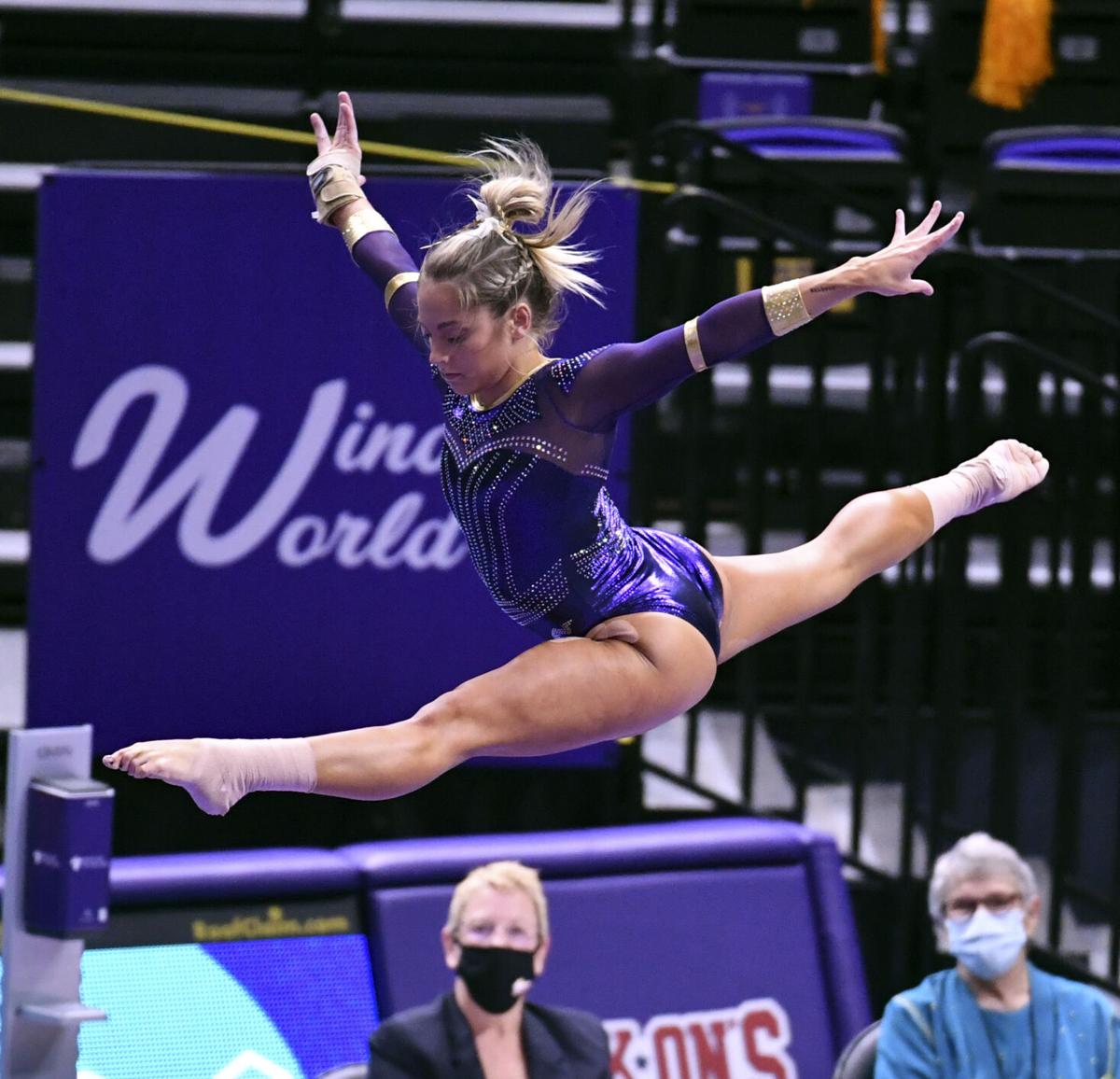 LSU senior Sarah Edwards performs her floor routine against Georgia, Friday, January 22, 2021, at the Pete Maravich Assembly Center. Edwards won the event with a score of 9.925.

The focus for LSU gymnastics in the first two weeks this season has been on the glittering contributions from the Tigers’ underclassmen like sophomore All-American Kiya Johnson and freshman Haleigh Bryant.

Bryant was again strong, winning her second straight all-around title (39.475) and on vault (9.90), while Johnson only competed on routine. So Friday night against Georgia it was time for LSU’s large senior class to shine, coming up with string of impressive routines to pace the Tigers to a 197.200-196.375 win over the Gym Dogs in the Pete Maravich Assembly Center.

Johnson’s only action on the night was a 9.875 leading off on uneven bars. Johnson, who had a perfect 10 on floor in LSU’s season and home opener two weeks ago against Arkansas, was limited because of an Achilles’ tendon problem, coach Jay Clark said.

Johnson competed as an all-arounder in LSU’s first two meets but fell on beam in both contests, scoring a 9.275 and a 9.050, respectively.

“We were just being cautious,” LSU coach Jay Clark said. “We’ve been nursing that Achilles since the Florida meet last year. It got hot early in the week, and it didn’t make sense when you’re trying to keep your eye on the big picture to risk it over a dual meet.

“We can’t ride the same horse all the time. The great teams don’t have to do that. I’m glad we got to prove that to ourselves tonight.”

The proof came from LSU seniors who won the other three events. Sami Durante took first place on bars with a 9.90, Reagan Campbell followed with a win on balance beam with a 9.95, and Sarah Edwards won her first career floor crown with a 9.925.

“We did a great job tonight,” said Durante, who also had 9.85s on vault and beam. “This is why we have a team. You can’t always have everyone there.”

LSU moved to beam in the third rotation continuing the string of solid and steady scores save for freshman Elena Arenas’ 9.625 when she stumbled on the landing of an otherwise strong routine. The Tigers saved the best for last when Campbell turned in a crackling 9.95 to win the event, just a quarter-point off her career high score and the best score of the night.

Campbell, 22, who has been doing gymnastics since she was 2, said it takes a lot of work to go out and perform at a high level after being in the sport for 20 years.

“It takes a lot of therapy,” the Dallas native said, “a lot of tape as you can see. I’m basically taping my body together at this point. It’s a lot of maintenance.”

With a sizable 147.750-147.250 lead heading into the final routine, the biggest question was whether LSU would crack the goal of a 197-plus score for the night without Johnson to anchor on floor.

That the Tigers did, thanks to three 9.90 routines from Dean, sophomore Alyona Shchennikova and Edwards, whose 9.925 was a career high.

“We have so much depth,” Campbell said. “It is a freshman-heavy team, and we’re confident in them to perform. But we can basically ask anyone to step up and they will perform.”

The night started with a ceremony to unveil a banner from the PMAC rafters for former LSU coach D-D Breaux. The longest tenured SEC coach in any sport, Breaux retired in August after 43 seasons. She received a standing ovation as she took the floor once again to watch her name hang from the arena catwalk.

“I kind of got emotional watching it,” Campbell said. “It was so much fun.”

LSU returns to action next Friday at Auburn. The meet is set for 4 p.m. on ESPN2.