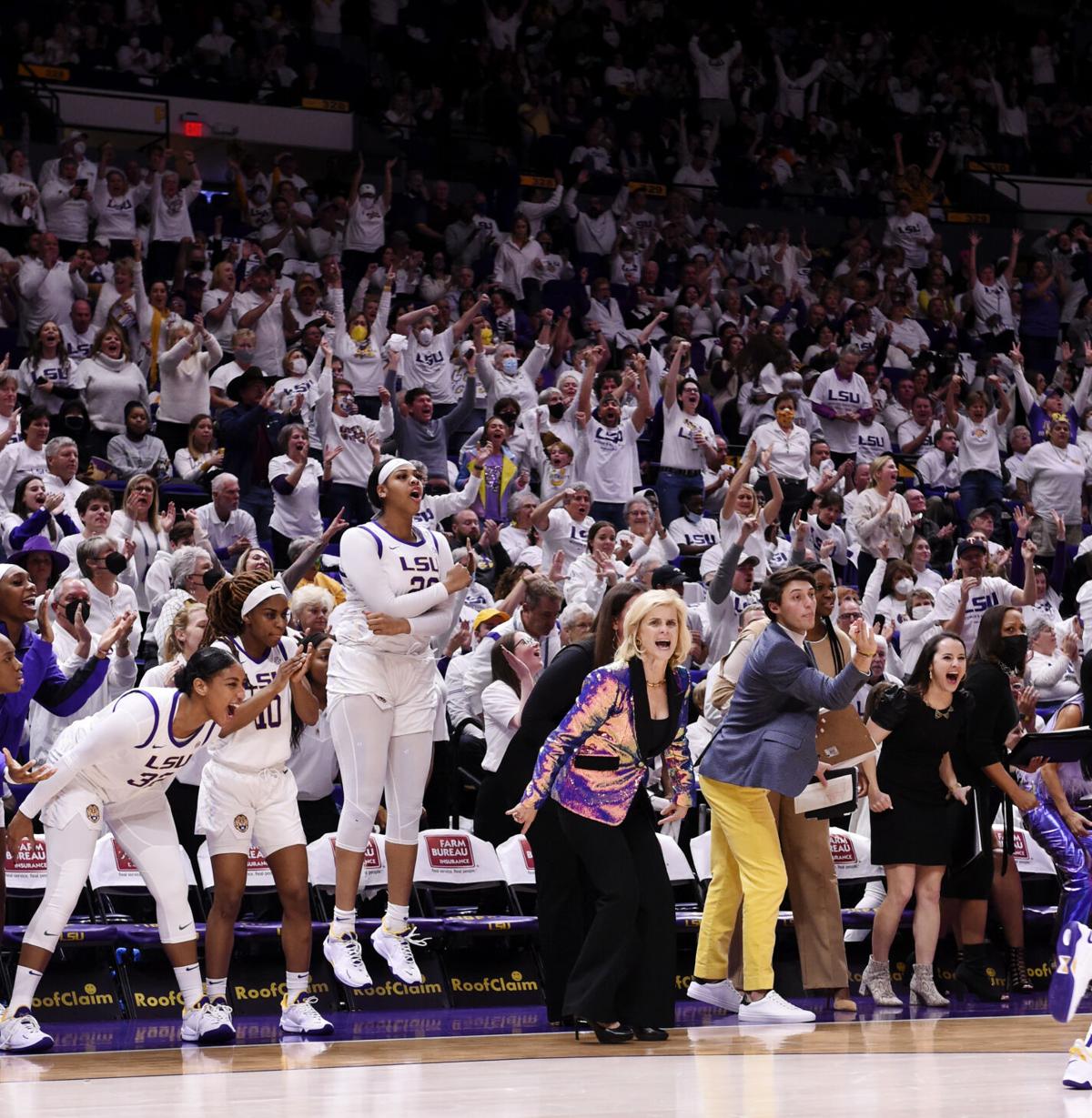 The LSU bench ignites after a basket in the second half of South Carolina's 66-60 win over LSU, Thursday, January 6, 2022, at the PMAC. 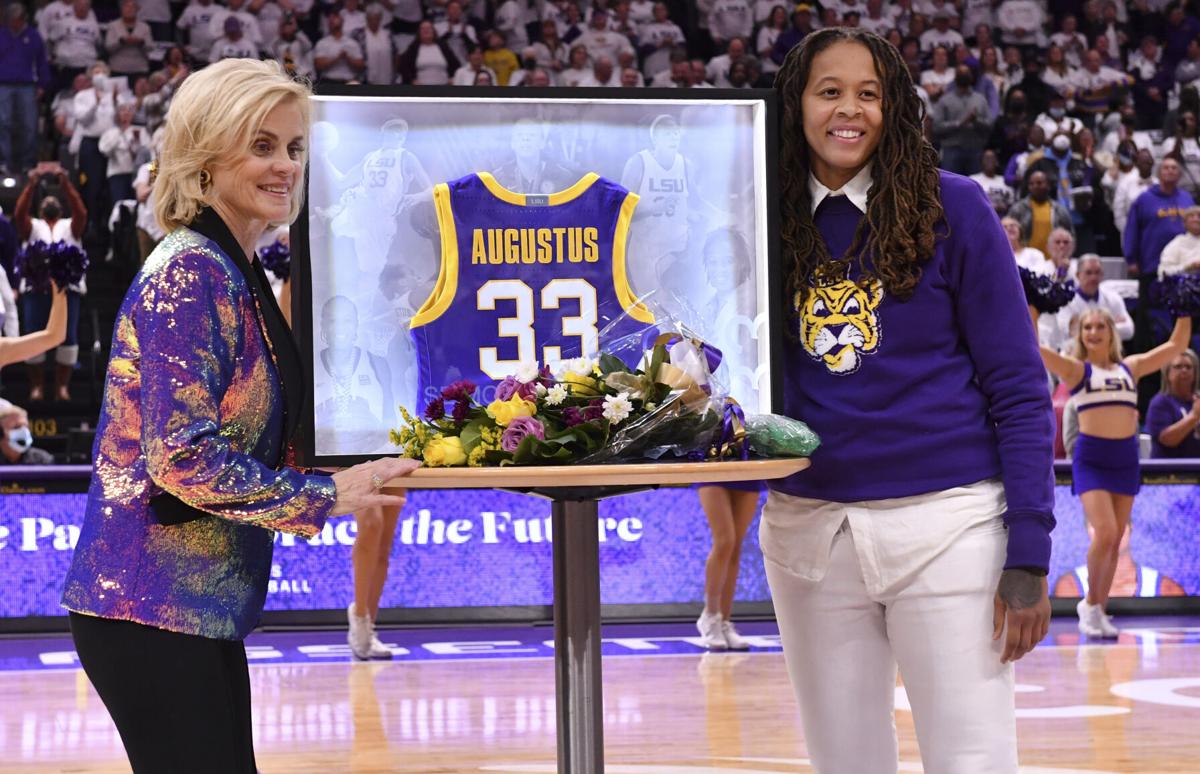 LSU coach Kim Mulkey, left, stands with former LSU great Seimone Augustus as she is honored before tip-off between No. 13 LSU and No. 1 South Carolina, Thursday, January 6, 2022, at the PMAC. 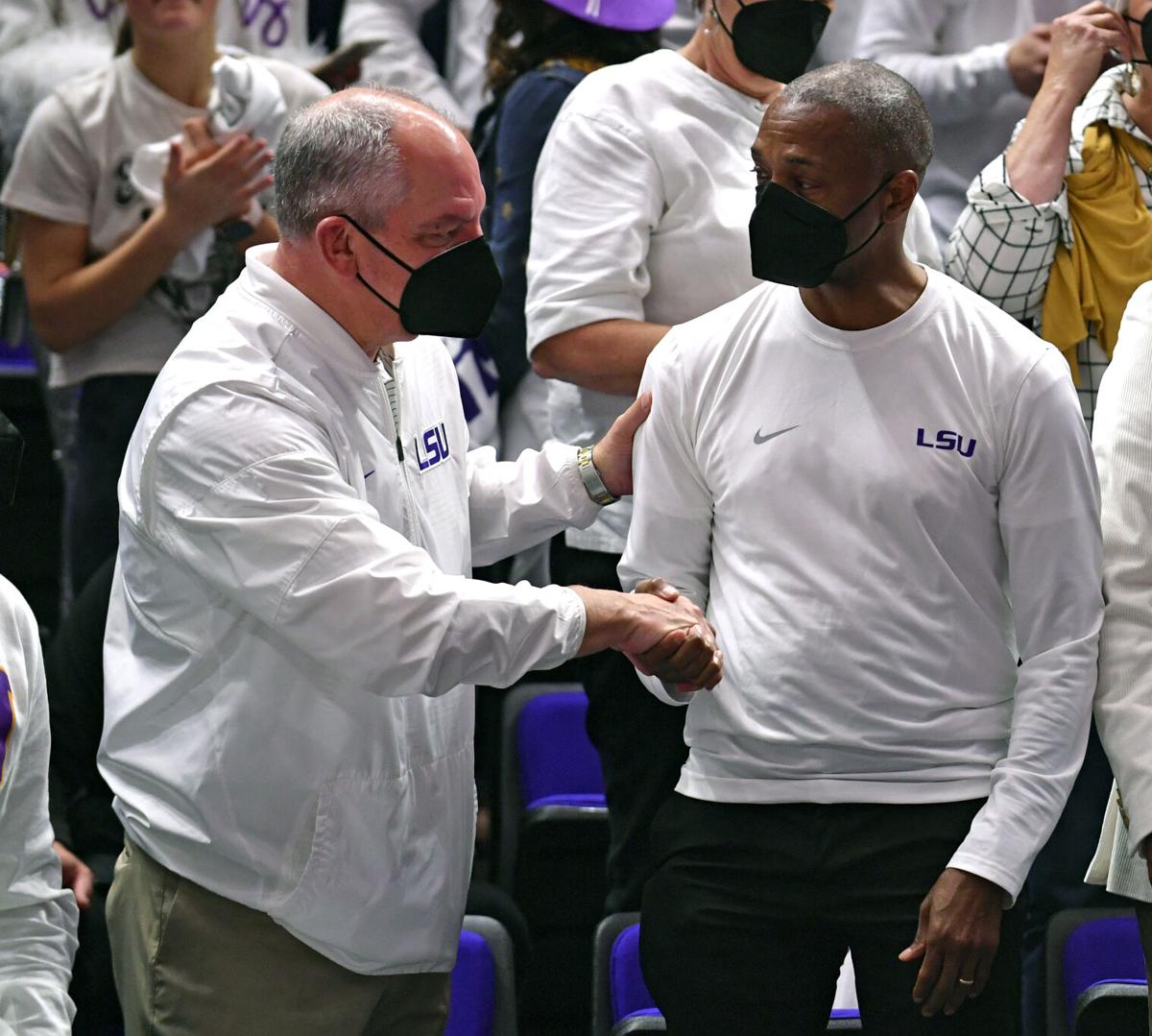 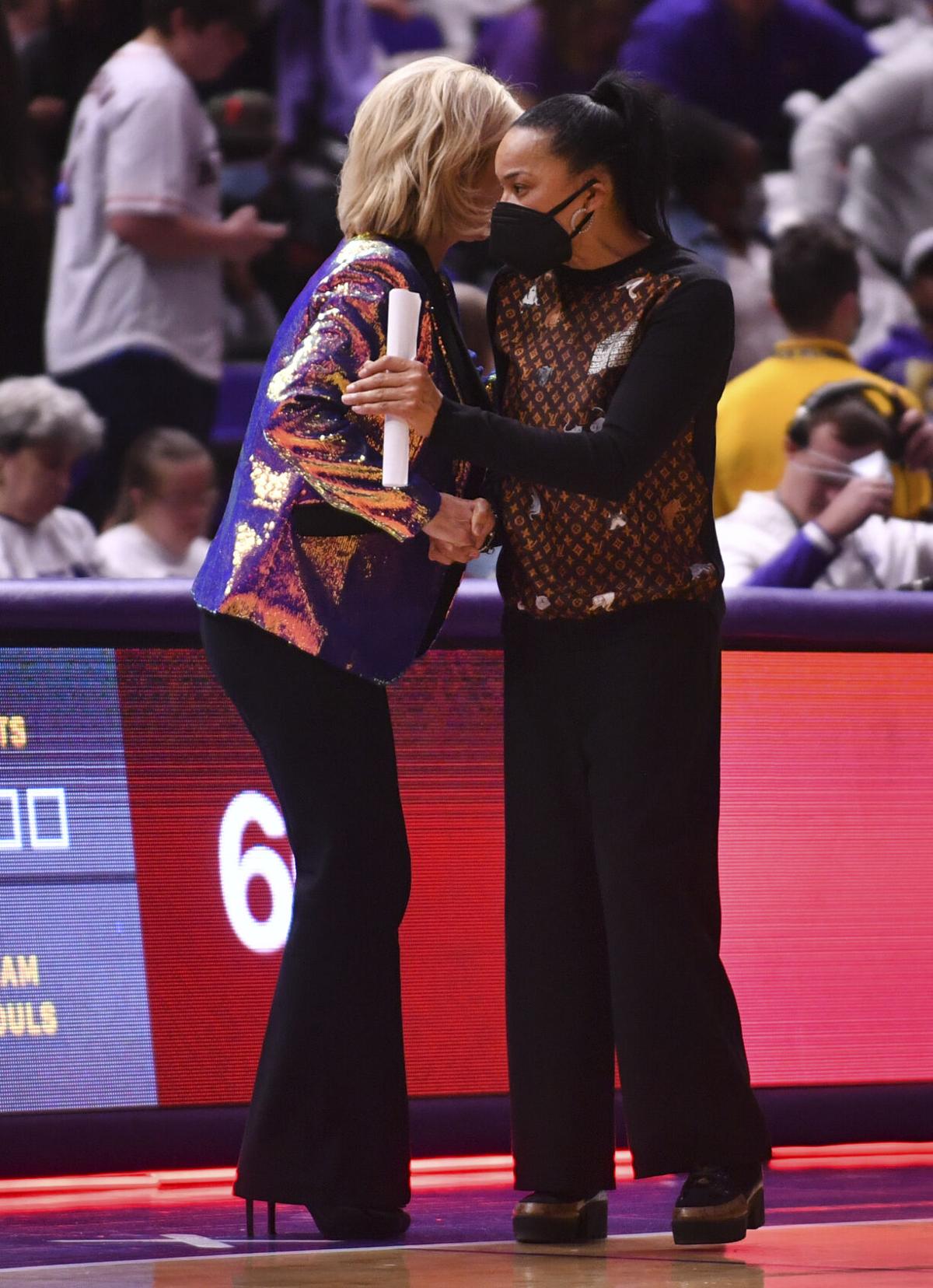 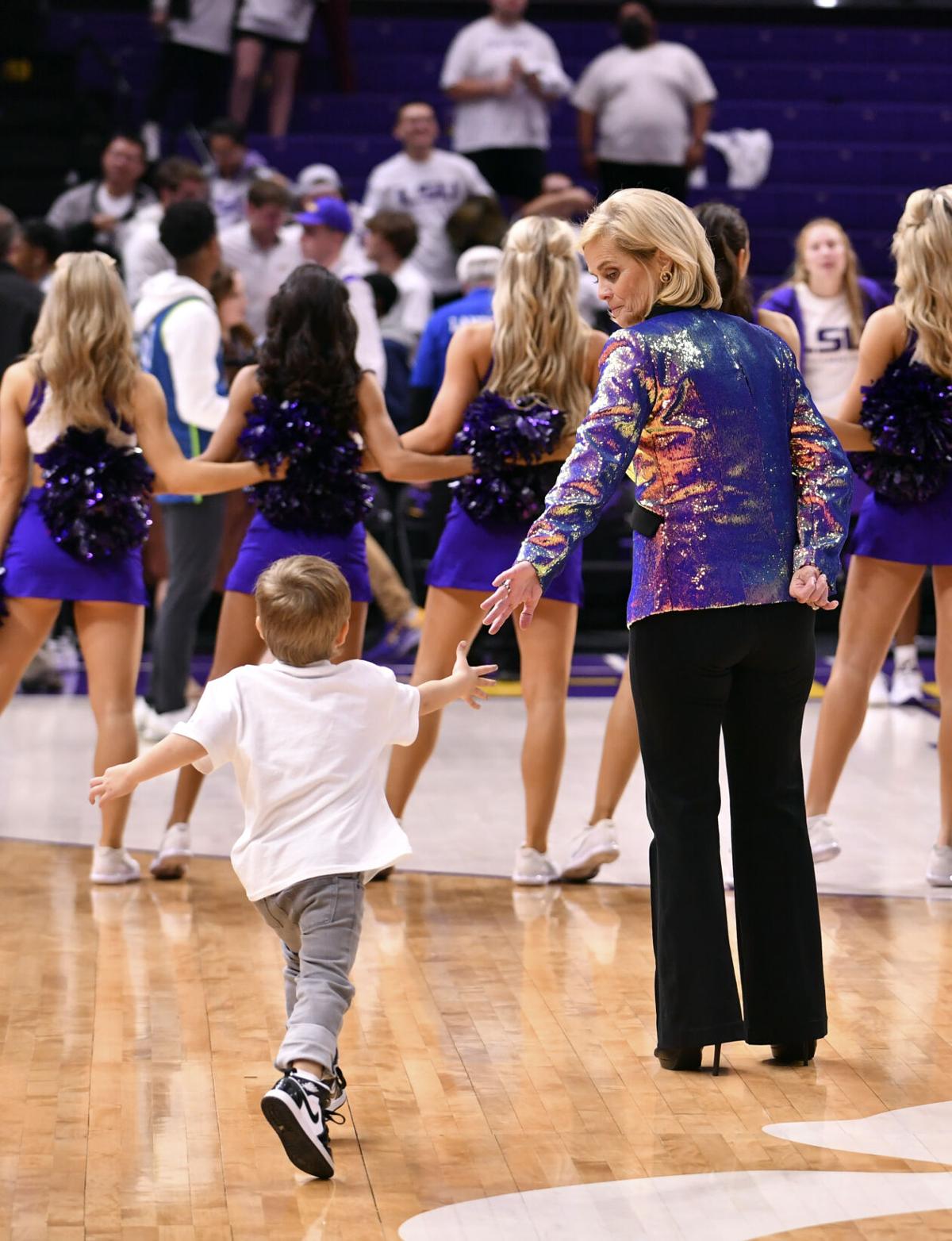 LSU coach Kim Mulkey reaches back for her grandson Kannon's hand as she joins her players in singing the school alma mater following South Carolina's 66-60 win over LSU, Thursday, January 6, 2022, at the PMAC.

The LSU bench ignites after a basket in the second half of South Carolina's 66-60 win over LSU, Thursday, January 6, 2022, at the PMAC.

LSU coach Kim Mulkey, left, stands with former LSU great Seimone Augustus as she is honored before tip-off between No. 13 LSU and No. 1 South Carolina, Thursday, January 6, 2022, at the PMAC.

LSU coach Kim Mulkey reaches back for her grandson Kannon's hand as she joins her players in singing the school alma mater following South Carolina's 66-60 win over LSU, Thursday, January 6, 2022, at the PMAC.

It didn’t happen for the LSU women’s basketball program Thursday night against No. 1-ranked South Carolina.

The Tigers’ bid for a stunning, timeline-leaping upset of the Gamecocks built to an impressive boil with an 11-point second quarter lead but eventually was buried beneath an avalanche of South Carolina rebounds. The Gamecocks wiped away LSU’s hopes of an upset by wiping the Tigers off the boards with a staggering 48-25 rebounding edge, which in the end practically made it a wonder LSU only lost 66-60.

But that defeat doesn’t mean the game wasn’t a happening. For the first time in years, at least since LSU’s last run to the NCAA Tournament Sweet 16 eight years ago, LSU women’s basketball was relevant again. It was fun again. It was, on a chilly Thursday night in January, the place to be in South Louisiana.

Another LSU major leaguer, Will Harris, was also in attendance. Saints running back Alvin Kamara and his girlfriend Te’a Cooper, who played at both South Carolina and for LSU coach Kim Mulkey at Baylor, came to watch this one, too.

“It’s huge,” senior center Faustine Aifuwa said of the game’s atmosphere. “As seniors, we’ve never played in front of a crowd like that. It was a big difference for us.”

They all came to see a show. They came to see an upset, the likes of which Missouri sprung on South Carolina recently. They came because LSU, and Mulkey, are a show worth seeing.

“They played their hearts out,” Mulkey said of her players. “Great crowd. I’m sorry we didn’t win, but we’ve come a long way. You have to give them credit.”

LSU has traveled far the first half of this season, now 14-2 overall and 2-1 in the Southeastern Conference. Are they likely to contend for the SEC championship? No, but as a top-15 team they are squarely in the hunt to be a top four NCAA regional seed. That would allow LSU to host first- and second-round NCAA tournament games. And that was unthinkable before the season began.

“They played with some grit,” Staley said. “Nikki did a great job getting the most out of them. If she got the support Kim is getting, the energy in the building, it’s going to raise the level of play. If Nikki had a chance to do that, maybe she’d still be here.”

Staley’s comments were puzzling at best, insulting at worst. One suspects she and Mulkey don’t have a chummy relationship — she later said “Kim does a great job simplifying; they play simple basketball” — which could be interpreted several different ways. Perhaps Staley misses Fargas being here since South Carolina has now won 13 straight games over LSU.

LSU had the makings of an upset Thursday night, but No. 1 South Carolina asserted itself in the second half to take a 66-60 victory at the Pet…

But Staley missed the point by a mile. Fargas didn’t get this kind of support because under her, LSU women’s basketball wasn’t this relevant. This was LSU’s first top-15 matchup at home since 2008, meaning that never happened during Fargas’ tenure (2011-21).

Support like LSU got Thursday night is earned. Support like that is cultivated. In her time at LSU since April, Mulkey has promoted her program and delivered with a team that people want to see. That appears to be ahead of any kind of time frame that could have been expected for the remodeling job she had to do.

In the end, though, even Mulkey couldn’t overcome all the headwinds the Tigers were dealing with.

The game turned when Aifuwa, battling down low with South Carolina All-American Aliyah Boston, got her fourth with 2:04 left in the third. Boston then went off, scoring 12 of her 19 points and grabbing nine of her 18 rebounds the rest of the way. Aifuwa would later foul out with 12 points and four rebounds.

Still, LSU had chances. Down 59-56 with just under three minutes left, Khayla Pointer and Alexis Morris both missed 3-pointers. If either had gone down, the roof would have come off the PMAC.

“I haven’t seen some of you before,” Mulkey said. She was speaking to some of the media at the postgame news conference but could have been speaking to thousands of Thursday’s fans. “Y’all come back. We’re not going away.”

It didn’t happen for LSU. This time. But that doesn’t mean things aren’t happening for LSU women’s basketball once again.