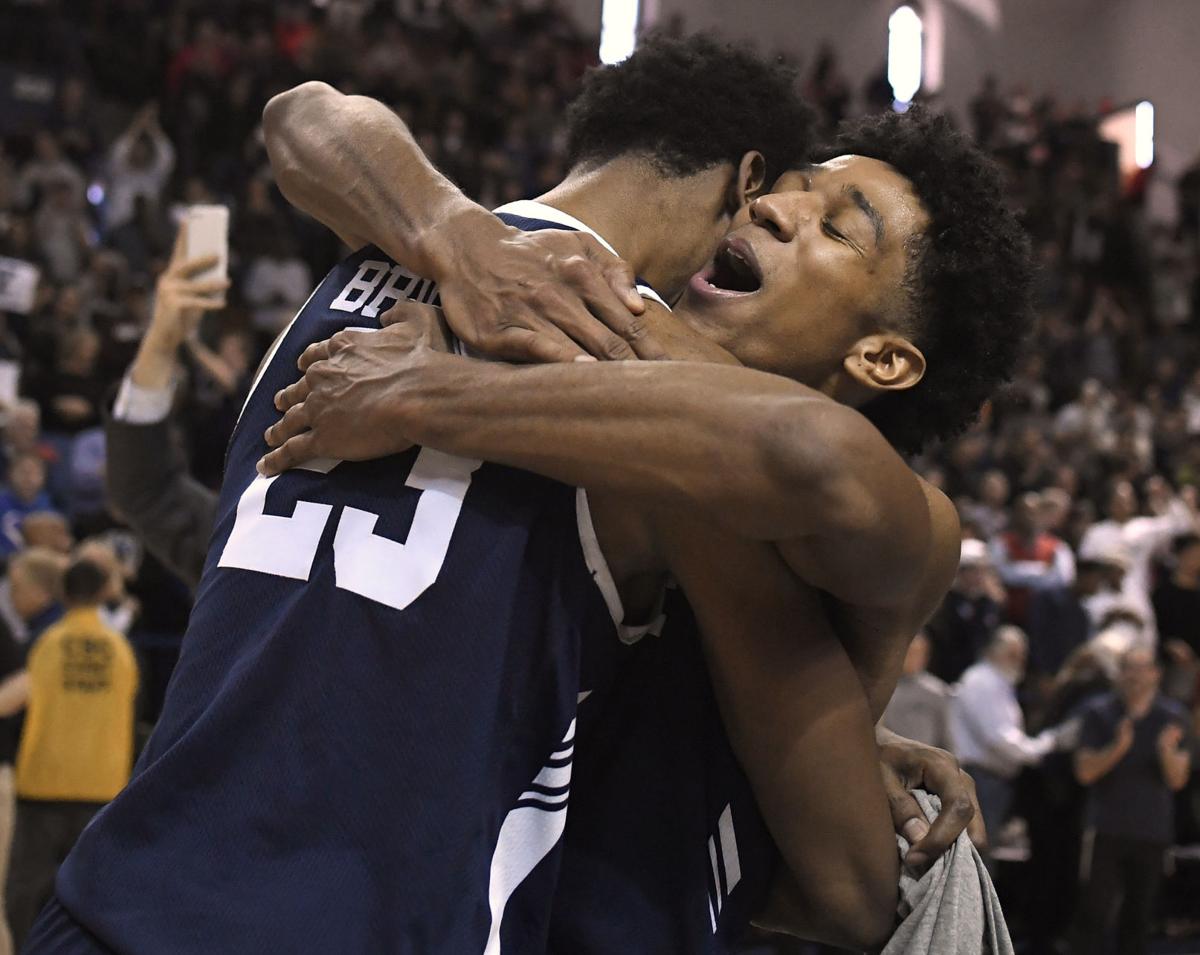 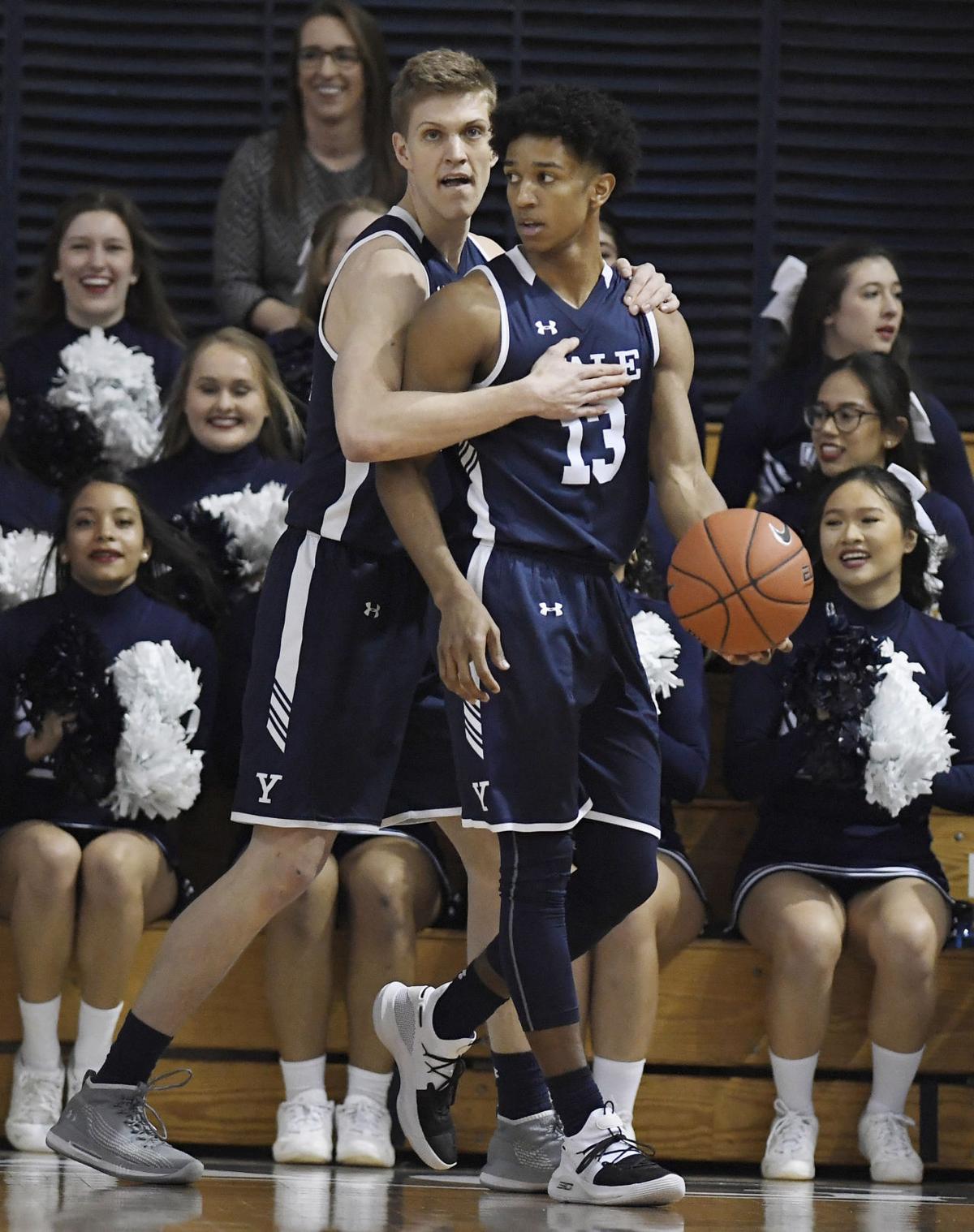 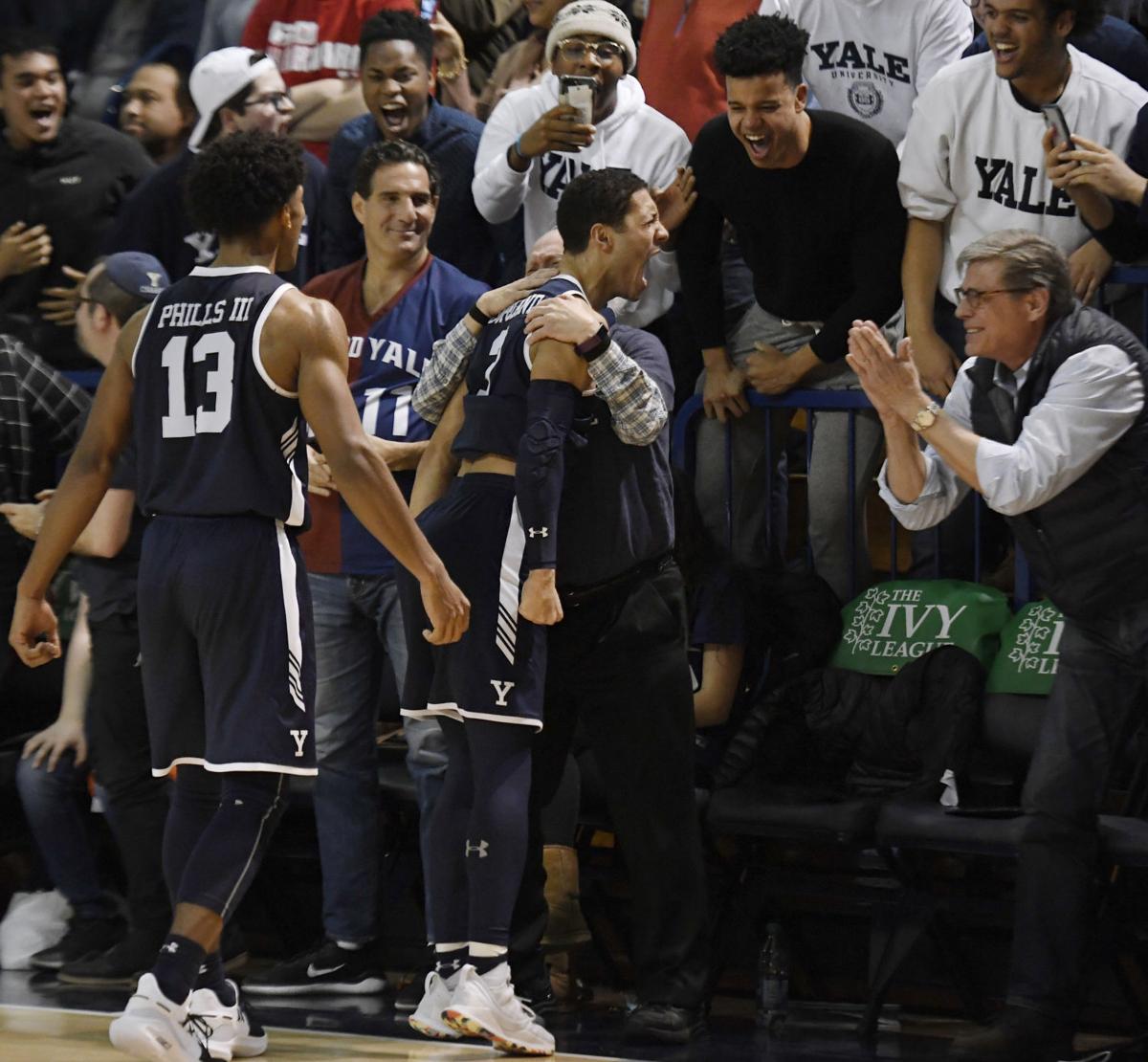 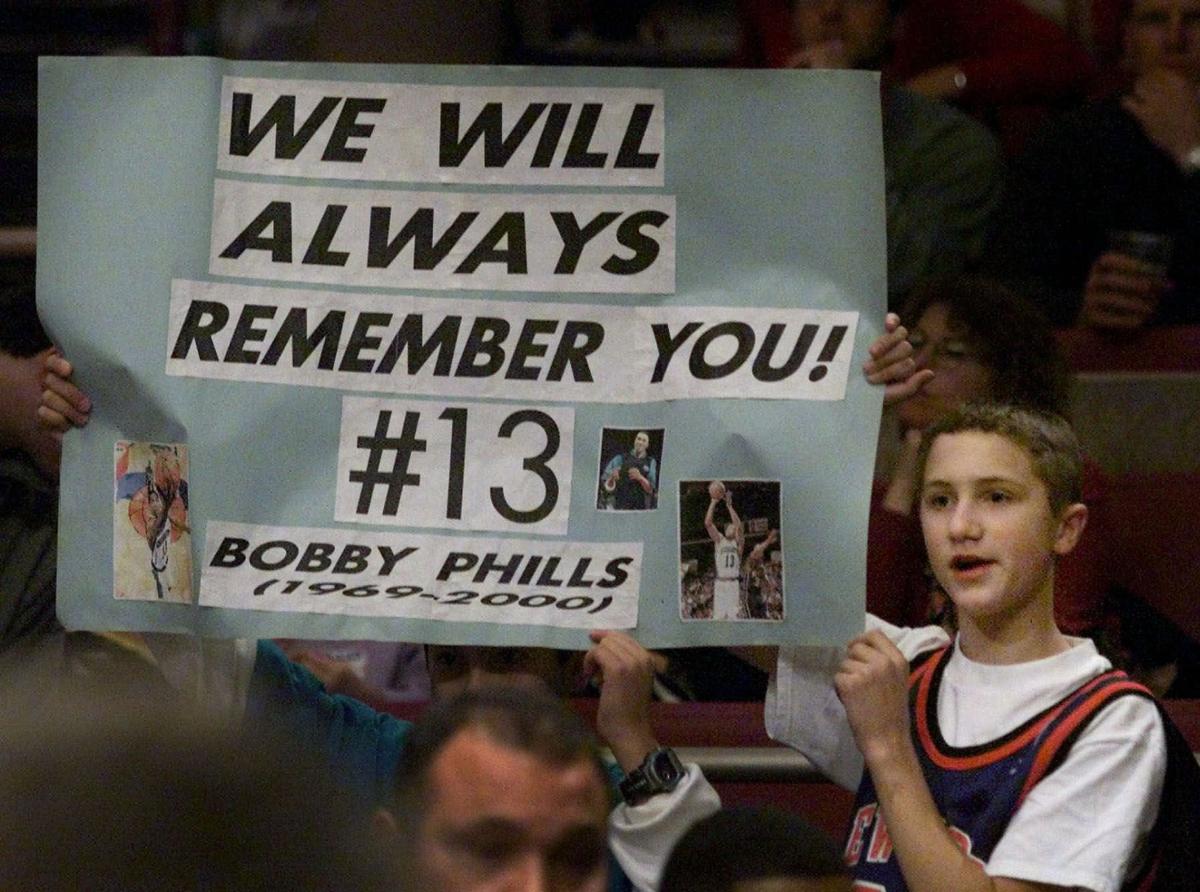 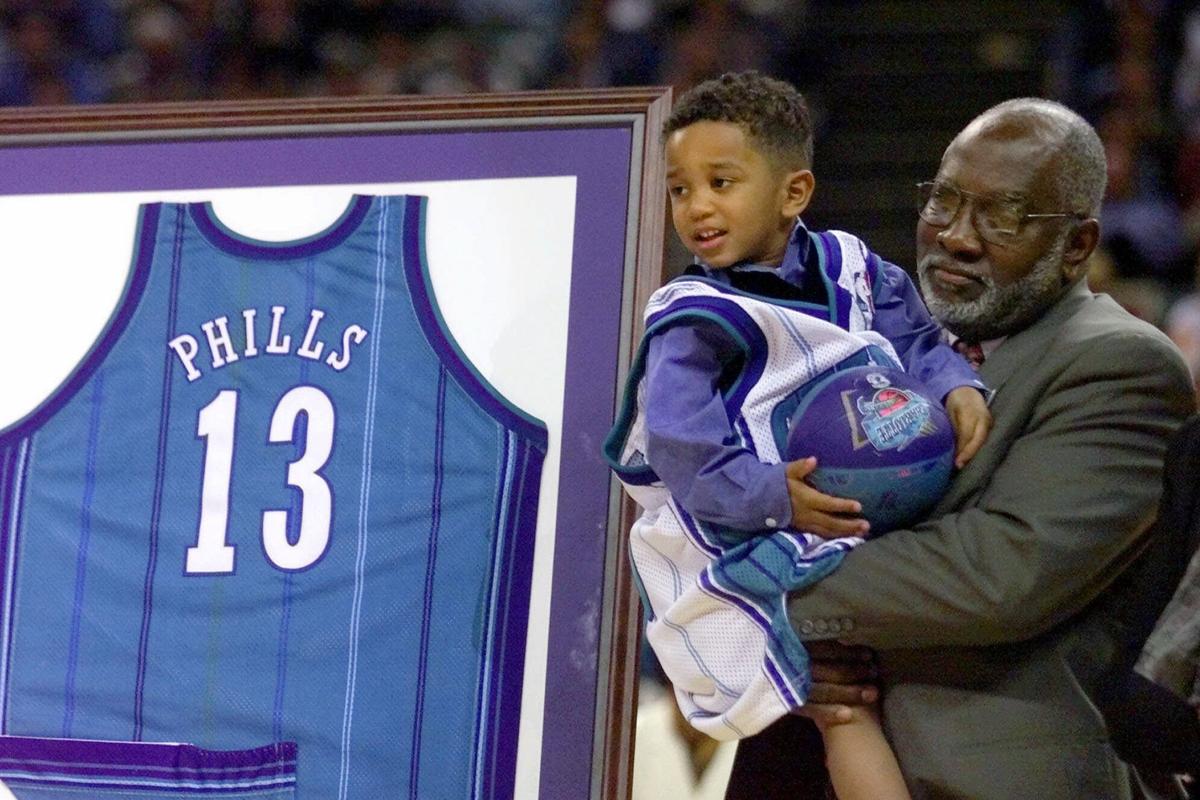 Dr. Bobby Phills Sr. holds his grandson Trey, 3, as the Charlotte Hornets retire the number of Dr. Phills' son Bobby during a ceremony at the Charlotte Coliseum in Charlotte, N.C., Wednesday, Feb. 9, 2000. Bobby Phills, guard for the Hornets, was killed in an auto accident last month in Charlotte. (AP Photo/Chuck Burton) Keyword Family 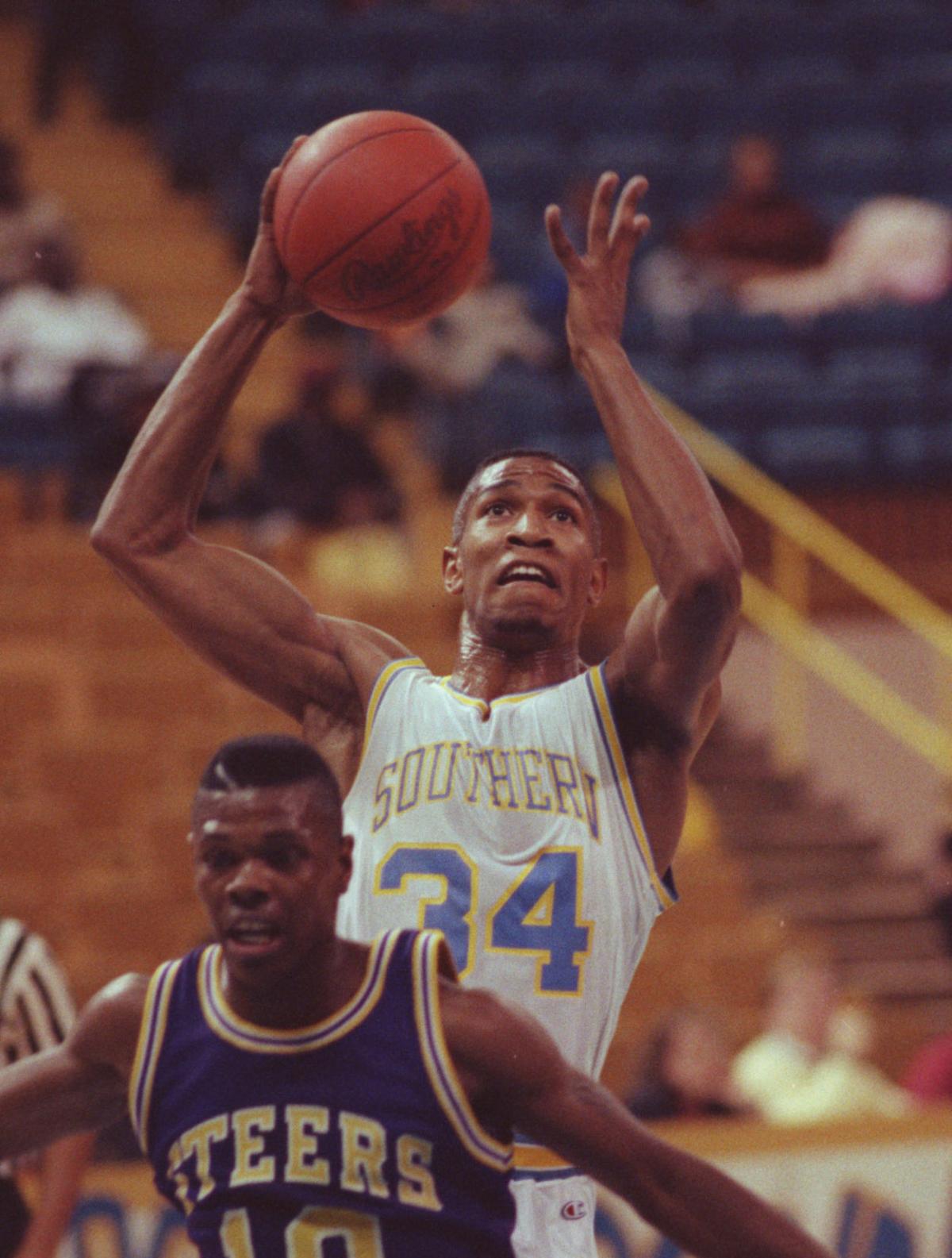 In the first few moments after learning his team's destination and opponent Sunday night for the NCAA tournament, all kinds of thoughts raced through Trey Phills' mind.

And, as a bonus, the Bulldogs would be flying instead of traveling by chartered bus like they did back in 2016.

Then, there was the opponent: An LSU basketball team that Phills is so familiar with even though he grew up in Charlotte, North Carolina, and attended high school there before accepting an offer from Yale.

The son of the late Southern Lab and Southern University basketball star Bobby Phills, Trey Phills still has family in Baton Rouge, which means he spent lots of holidays and summers with his grandparents and other relatives growing up.

So when LSU's name popped up during the NCAA tournament selection show, which was followed seconds later by Yale, Phills couldn't help but flash a wide smile.

"It was like, 'Wow, that's really cool to get a chance to play LSU,’ ” he said by phone Monday night. "I have a lot of family and friends down there."

LSU will play Yale to start NCAA tournament; Here's what you need to know about the Bulldogs

The LSU Tigers earned a 3-seed in the East Region and will first play14-seed Yale in the first round of the NCAA Tournament.

Phills found out just how many when he began getting text messages while his teammates celebrated the news of the matchup with 12th-ranked LSU. The teams will meet at 11:40 a.m. Thursday in Jacksonville, Florida.

"Somebody texted me and said, ‘My granny called to tell me you made the local news in Baton Rouge ... the boy is famous!’ ” he said with a laugh.

Phills was just 3 years old on Jan. 12, 2000, when his father Bobby, a nine-year NBA veteran who was then with the Charlotte Hornets, was tragically killed in a car accident after a morning shoot-around with his team.

Even though his mother, Kendall, remained in Charlotte to raise Trey and his younger sister, Kerstie, Trey Phills said they never felt far away from the childhood home of his mother and father.

"My mom is from Baker, but honestly, it's not something I really thought about growing up," he said of remaining in Charlotte. "Our family was so supportive of us that it didn't really feel like (Baton Rouge) was that far away, so we had the summers and holidays.

"It didn't feel like my sister and I were raised that far away. We just had that spirit of family everywhere we went, and my mom did a great job with us."

But there were reminders of his late father, of course, Trey Phills said.

He did find some tapes of his dad's college days when Bobby Phills, a sharpshooting 6-foot-5 guard, helped the Jaguars put up offensive numbers at a frenetic pace for coach Ben Jobe in the late 1980s.

Bobby Phills averaged 20.1 points a game as a junior and 28.4 points in his senior season. The Jaguars averaged more than 95 point a game in each of his four seasons, topped by a 104.4 average in his senior year.

"I did see highlights from his college days; I found some tapes in the attic and threw them on the TV," Trey Phills said. "It was game where he made six or seven 3s, so I remember watching that."

Rabalais: Once again, it's time for March Madness from A to Z

The delivery guy is on the way with the chicken wings.

As for his own basketball career, the younger Phills, whose full name is Bobby Ray Phills III, was a standout at Charlotte Christian High School — the same school that produced NBA star Stephen Curry.

As a talented 6-2 guard with a 4.9 GPA, he was attractive to Ivy schools although he didn't know much about them except for Harvard, Yale and Princeton. He also had basketball offers from Wofford and Mercer.

A three-year starter, Phills is averaging 7.1 points, 3.3 rebounds and 1.8 assists for the Bulldogs, who are 22-7 going into the matchup with LSU.

Named the team's best defender by the coaches the past two seasons, he's averaged 6.8 points and 3.0 rebounds for his career while starting 78 of 106 games.

Off the court, Phills, who is majoring in sociology, has maintained a 3.4 GPA during his four years and was named a Senior Class Award winner, which recognizes college athletes for their grades, community work and sportsmanship.

"It's funny, I don't even know how I ended up with those types of schools on my radar," he said. "I guess it was a product of my grades, so they reached out to me. I never really thought about the possibility of going to a school like that until I sat down and thought about it.

"It's crazy how things happen," he said. "I think I'm exactly where I'm supposed to be."

LSU in NCAA tournament: No. 3-seeded Tigers will face Ivy League champion Yale in first round

The LSU basketball team was rewarded for its body of work Sunday when the Tigers received a No. 3 seed for the NCAA tournament.