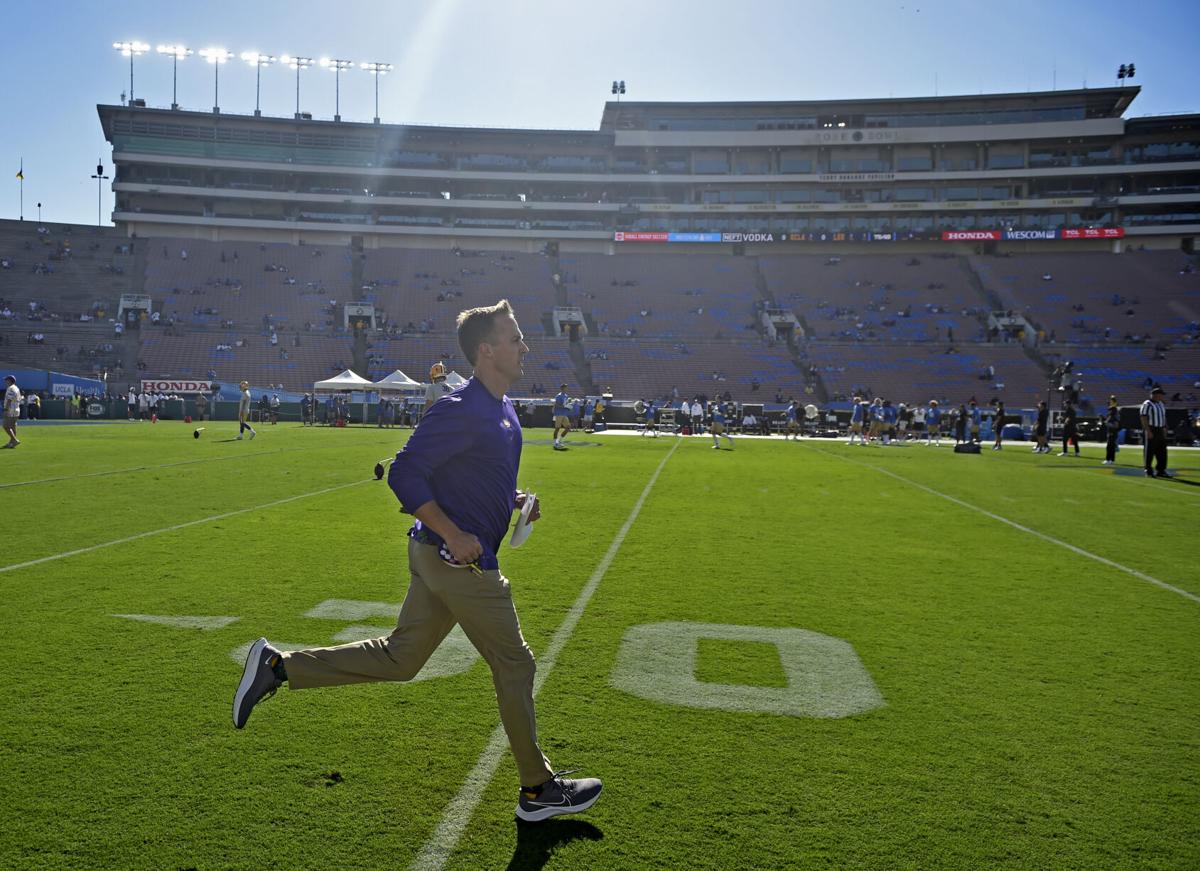 LSU offensive coordinator Jake Peetz runs on the field before kickoff against UCLA, Saturday, September 4, 2021, at The Rose Bowl in Pasadena, Cali. 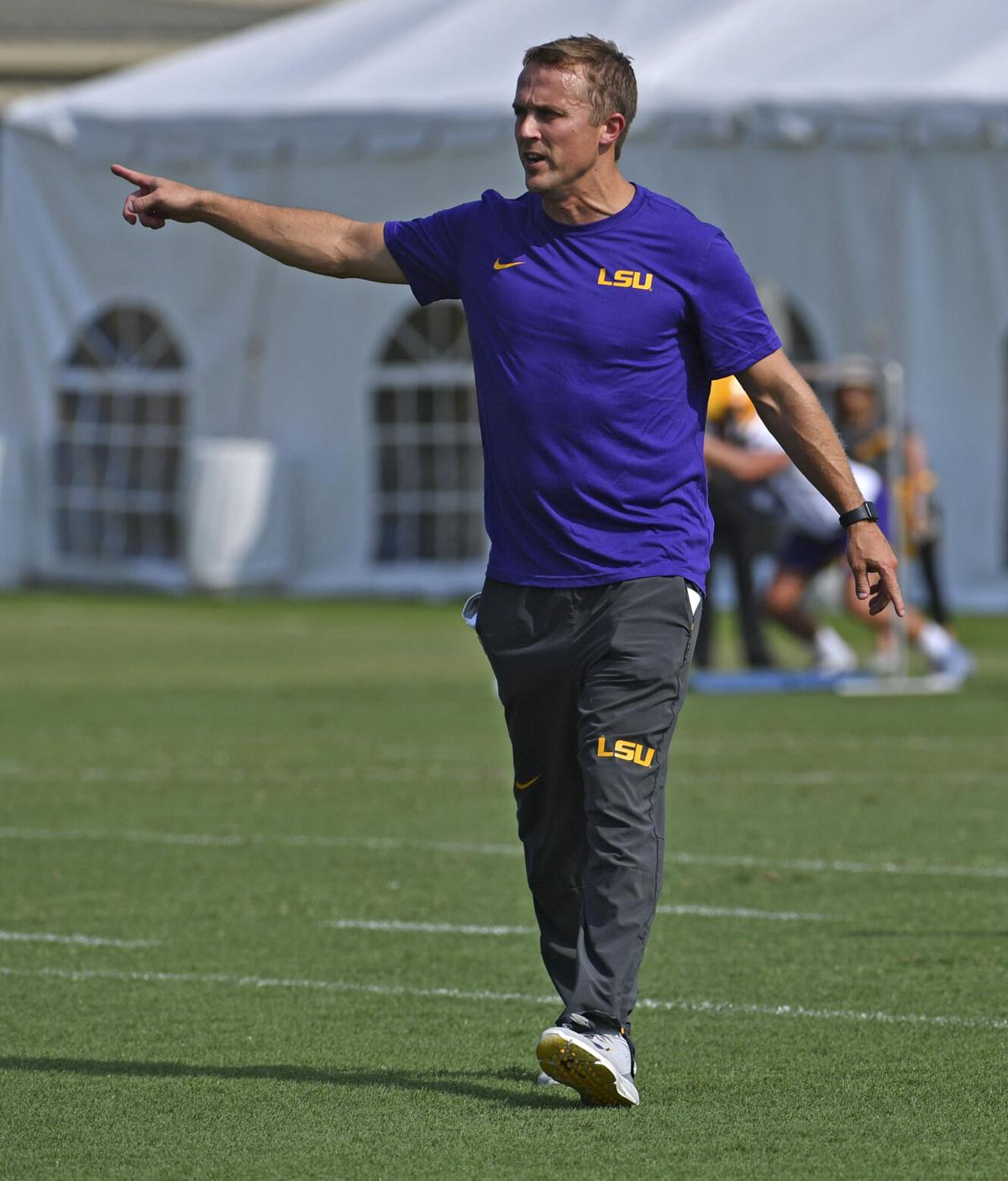 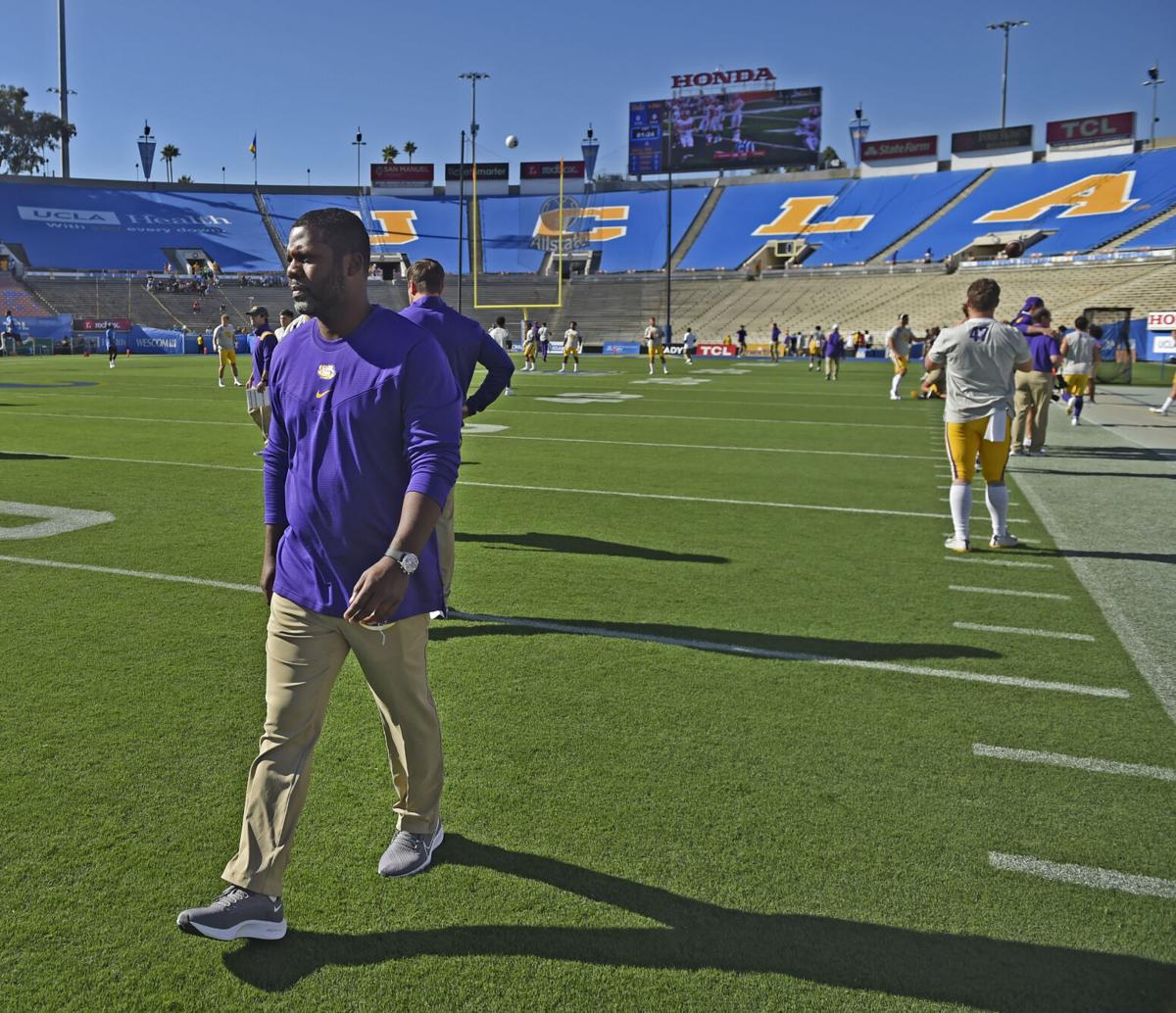 LSU offensive coordinator Jake Peetz runs on the field before kickoff against UCLA, Saturday, September 4, 2021, at The Rose Bowl in Pasadena, Cali.

Stoops hadn’t changed play-callers in five years, but he fired Eddie Gran last December after the Wildcats offense dipped. Stoops replaced him with Liam Coen, someone who never had directed an offense at the FBS level.

Coen previously was an offensive coordinator at Maine, where the 2017 team finished 58th in scoring in the FCS. He then spent three years with Sean McVay as a Los Angeles Rams assistant, his connection to the youngest head coach in NFL history catapulting Coen into a role with more responsibility.

Coen based his system on what he learned from McVay, implementing an outside zone run scheme with play-action and pre-snap motion. Through five games, the undefeated Wildcats have scored 28.8 points per game, which ranks 70th in the country.

“It's going to click,” Coen said. “It's clicked at times. We've shown flashes in multiple different games, in different situations, whether it be red zone or third down. We've been very good, and we also haven't been very good. But when it clicks, it's going to be special."

LSU vs. Kentucky: Our staff makes its picks for Saturday night's SEC contest in Lexington

The Advocate's staff writers predict the outcome of LSU's game against No. 16 Kentucky on Saturday night in Kroger Field.

Stoops understands the challenge his new assistant faces. He was a first-time defensive coordinator in 2004 at Arizona, which didn’t have a winning record until his fifth season. He took the same job at Florida State in 2010, where he learned to maintain his beliefs while making adjustments.

LSU put itself in a similar position during the offseason with new coordinators.

The changes have delivered mixed results and show how first-time coordinators experience varying levels of success.

How does LSU beat Kentucky? Keys include running the ball, turnover margin

From running the ball to making Kentucky quarterback Will Levis throw more, four keys to LSU winning its next game.

Jones’ defense initially dealt with some of the same issues that plagued the unit during former coordinator Bo Pelini’s only season. The Tigers struggled with crossing routes and missed assignments in their first game. But Jones adjusted, and with the exception of not being able to tackle Auburn quarterback Bo Nix last weekend, the group has improved over the past four weeks.

Concern now has shifted onto the offense. Heading into LSU’s pivotal game at 6:30 p.m. Saturday against No. 16 Kentucky at Kroger Field, the Tigers continue to struggle along the offensive line, hampering their ability to run the football and call a balanced offense. And Peetz has tried to change plays too late at the line of scrimmage.

LSU still averages 31.4 ppg — 56th in the country — by relying on long pass plays, but it hasn't scored more than 30 points against another Power Five conference team.

“I think it's taken a while for us to work out some kinks, to find our identity and know personnel, and then get in the game-time situation and know what we can and what we can't do,” Orgeron said.

Coordinators can have success in their first season. As Orgeron pointed out, Brady helped design an offense with offensive coordinator Steve Ensminger that became the most productive in college football history. Brady worked at LSU for one year, and the Tigers averaged 48.4 ppg while winning the national championship.

Rabalais: It's been a long week. Ed Orgeron finds himself in need of another Bluegrass Miracle.

A duck, Mick Jagger and Ed Orgeron walk into a bar.

“I think every situation is different,” Orgeron said. “It's on the individual.”

Making the jump from position coach to coordinator requires another level of personal development. Coordinators have to manage an entire staff and usually call plays, as opposed to focusing on a single position group. Similar to experiencing any other job for the first time, they must learn what works for them.

Some coaches adjust to the role quickly, while others improve over time. When Josh Heupel became the offensive coordinator at Missouri in 2016, the team had finished second-to-last in the FBS in scoring at 13.6 ppg the year before. The team jumped to 31.4 ppg in Heupel’s first season, then 37.5 ppg the next year, the 14th best average in the country.

“We had some success at times early, but there was a growth pattern, too, in what we were doing,” said Heupel, now the head coach at Tennessee. “We evolved.”

Players get more comfortable and understand how they fit within the scheme the longer they stay in it, Missouri coach Eliah Drinkwitz said, and coaches learn how to blend their scheme and their athletes together. Immediate success often depends on the experience of the players, especially if they have experienced a similar system already.

LSU continues Southeastern Conference play Saturday night with a matchup vs. No. 16 Kentucky in Lexington.  Here are the top three players to …

“You never know that group of people and where they're at and how they learn and what their capabilities are and what their experience level is and their talent level,” Texas A&M coach Jimbo Fisher said of the first year with a new team. “Ideally, I think you usually get better over time. But have you seen those one- or two-year wonders? Without a doubt.”

“Sure, the second year in a system can certainly help some things,” Georgia coach Kirby Smart said, “but it's got a lot more to do with the players that are on the team and the buy-in from those guys, more so than anything else.”

Peetz and Jones don’t have the luxury of time this season. LSU faces immense pressure after a 3-2 start, and the schedule gets more difficult. Beginning with Kentucky, the Tigers play three straight teams that are ranked before their open date. Then they travel to No. 1 Alabama, making bowl eligibility far from a lock.

To put the season back on track, Jones will have to scheme around injuries as LSU plays without four starters. He also needs to improve the third-down defense success rate.

The lack of an effective pass rush was one of the glaring deficiencies of LSU’s poor defensive showing in 2020.

On the offensive side, Orgeron said LSU spent part of practice every day this week on the pre-snap process. He wants Peetz to choose a play early and stick to it instead of trying to find the perfect audible against the defense, hoping that approach will help LSU maintain tempo.

The coaches also made a few adjustments to formations to re-commit to running the football, Orgeron said. The Tigers may continue to pass on early downs to set up manageable situations, but they want to capitalize when they see favorable run defenses and regain their physicality.

The rest of the season will depend on their ability to adjust.

“Obviously, there's things we need to coach better,” Orgeron said. “That's my responsibility. And we need to play better. But you know, on the coaching part, we've got to handle that. We've got to get better.”