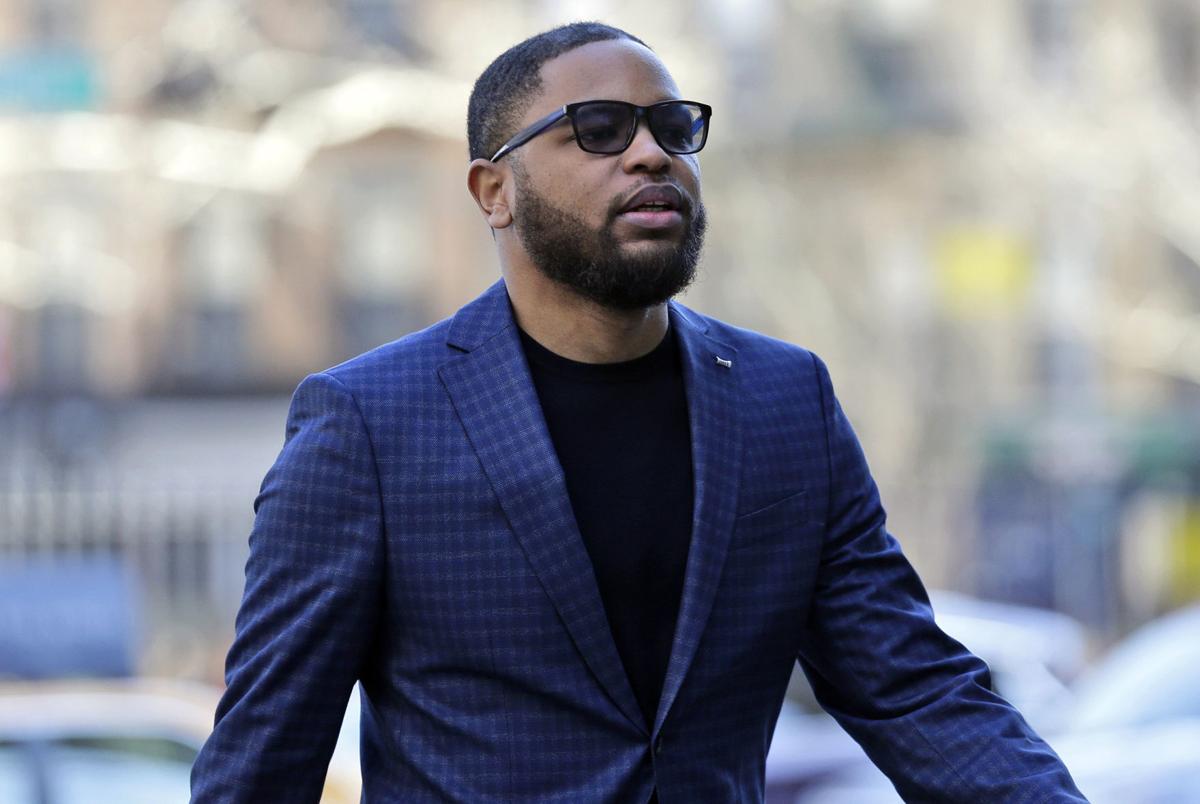 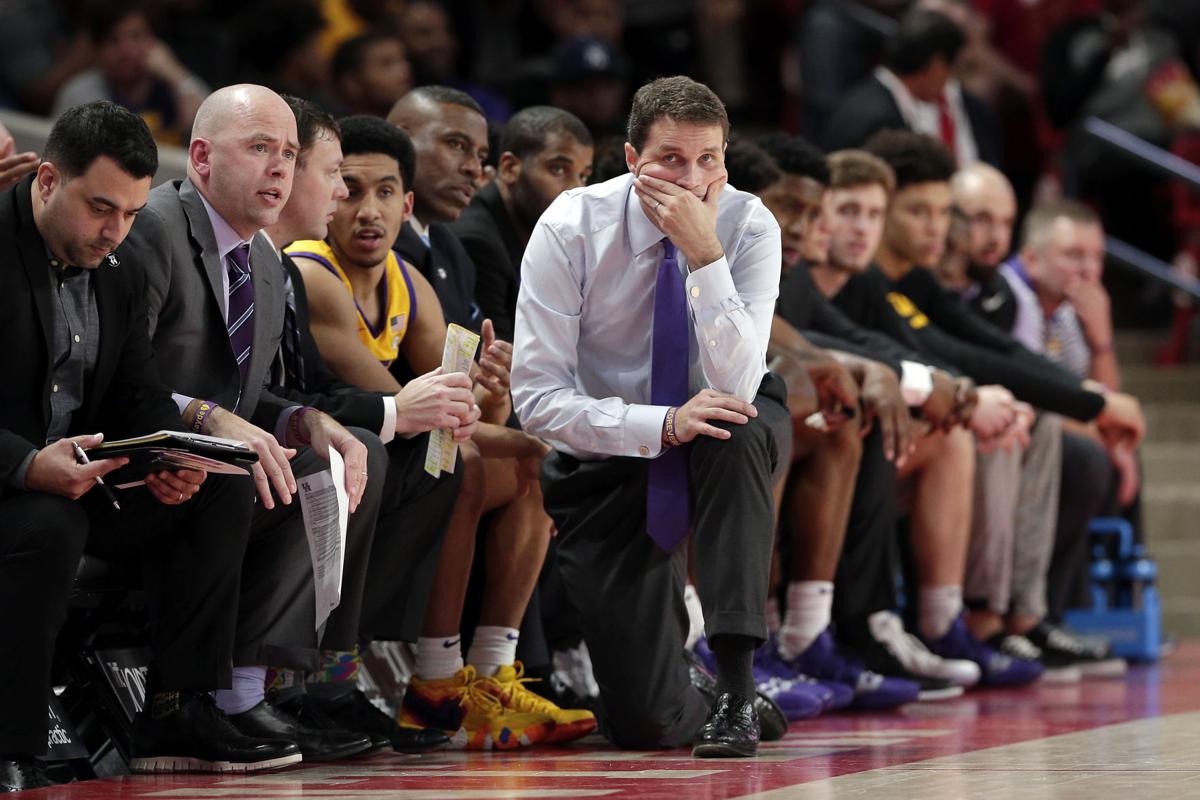 LSU head coach Will Wade kneels at his bench in the final minutes of their loss to Houston during the second half of an NCAA college basketball game, Wednesday, Dec. 12, 2018, in Houston. (AP Photo/Michael Wyke) ORG XMIT: TXMW113

LSU head coach Will Wade kneels at his bench in the final minutes of their loss to Houston during the second half of an NCAA college basketball game, Wednesday, Dec. 12, 2018, in Houston. (AP Photo/Michael Wyke) ORG XMIT: TXMW113

NEW YORK — An aspiring sports business manager and an amateur basketball coach were convicted of bribery conspiracy Wednesday at a trial that showed top college coaches were paid off to steer NBA-bound athletes to favored handlers.

The verdict capped the two-week trial of Christian Dawkins and youth basketball coach Merl Code in a case that forced the NCAA to confront corruption affecting basketball players at some of its elite programs.

Dawkins, 26, of Atlanta, and Code, 45, of Greer, South Carolina, were convicted on a conspiracy count, but acquitted of some other charges. Dawkins was also convicted of bribery.

LSU, and second-year men’s basketball coach Will Wade, found themselves repeatedly drawn into the scandal the federal criminal investigation created. Portions of FBI wiretaps revealed in October and again in March captured Wade discussing recruits with Dawkins in language that hinted at possible payoffs.

Prosecutors at the just-concluded trial played a secretly recorded video of then-Arizona assistant Emanuel “Book” Richardson meeting with Dawkins’ financial backers in which Richardson claimed Wade told him about a $300,000 deal for prized recruit Naz Reid.

But prosecutors moved on to more detailed allegations of payoffs and bribes at Arizona, Oklahoma State and Southern California. No further evidence of any deal to land Reid, six-figure or otherwise, came out in court and neither LSU nor Wade came in for another mention.

The FBI wiretaps of Wade — in which Wade spoke of a “strong-ass offer” for one recruit and told Dawkins he could “get you what you need” for another — weren’t played in court. Nor did jurors hear directly from Wade, despite efforts by Dawkins’ attorney to force Wade and Arizona coach Sean Miller into the witness box.

Wade’s recorded comments cast a cloud over the LSU program and eventually landed Wade a suspension that put the second-year coach on the bench for the team’s run to the Sweet 16.

NCAA probes into potential violations at dozens of schools implicated in the federal case, including LSU, are likely already underway. But when and what punishments might come — and whether NCAA investigators, who lack the legal authority of FBI agents, will turn up further evidence — remains to be seen.

Leaving court, Dawkins said he could have chosen to cooperate with prosecutors and identified coaches he knew were willing to funnel money to top athletes.

"I could have," he said. "Anybody who's paying players to me is a good guy. I think the whole case is B.S. so I wouldn't have cooperated."

The verdict came just days after Dawkins took the witness stand and denied bribing anyone. He testified that an informant and undercover FBI agents, posing as investors in his fledgling management company, had tried to get him to pay bribes, but he refused.

In closing arguments, a prosecutor said Dawkins lied to jurors.

Outside Manhattan federal court, Code said: "There was no evidence at any point in the trial that I bribed anybody."

The prosecution revealed how financial advisers and business managers allegedly paid tens of thousands of dollars to assistant college coaches and athletes' families to steer highly regarded high school players to big-program colleges, sometimes with the help of apparel makers. The bribes also secured the allegiance of players to certain financial advisers, managers and even a tailor.

During the trial, universities were portrayed by prosecutors as victims of greedy financial advisers and coaches.

Steven Haney, a lawyer for Dawkins, said the acquittal of Dawkins and Code on some charges showed jurors "found that the universities were not victims."

"That spoke loudly from this verdict," Haney said.

Haney spoke with pride of Dawkins. "He could have brought the whole world of college athletics to its knees and he chose not to," the lawyer said. "He was asked repeatedly by the government to cooperate. He said, 'I'm not going to give you the names of 15 to 20 coaches.' Today he leaves this courthouse winning four of six (counts)."

Prosecutors say video and audio evidence was overwhelming that Dawkins and Code eagerly embraced the scheme in 2016 and 2017. Code was a Clemson point guard in the 1990s who later developed college basketball contacts working for Nike and Adidas.

The second trial to result from the arrest of 10 individuals featured some surprises, including claims that some bribes were paid to ensnare NFL-bound athletes at major schools.

But the trial, which once appeared to threaten LSU’s basketball program with further bombshells, instead wrapped up with no direct allegations of payoffs.

Prosecution witness Louis Martin Blazer, a financial adviser, testified he paid football players from $100 to $3,000 to secure them as clients while they were at schools including Pittsburgh, Penn State, Michigan, Notre Dame, Northwestern, North Carolina and Alabama. He testified only after pleading guilty to stealing from clients, including NFL players, to invest in film and music projects.

Another revelation came when a recording was played of Clemson assistant coach Steve Smith listening to Dawkins' offer in July 2017 to help the family of Zion Williamson if Smith believed he could successfully recruit him.

Williamson played last season at Duke before entering the NBA draft scheduled for June. He is widely projected to be the No. 1 pick.

Also, additional schools emerged at the trial as possible targets of the conspiracy.

Blazer said he met in Las Vegas with assistant coaches eager to join the conspiracy but the men were not offered bribes because they could not deliver high-enough caliber athletes. Those schools included Alabama, Connecticut and Texas A&M.

He also said he met with an assistant coach from Louisville. The prosecution has led to the ouster by Louisville of its Hall of Fame head coach, Rick Pitino, though he was never charged criminally.

Prior to the trial, assistant coaches Preston Murphy of Creighton and Corey Barker of TCU were placed on administrative leave by their schools after each was accused of taking a $6,000 bribe from Dawkins to send prospective clients his way.

Code and Dawkins already were convicted in October on similar charges related to payments made to players' families rather than coaches. They were each sentenced to six months in prison.

At sentencing for Wednesday's conviction, Code faces a maximum of five years in prison while Dawkins could face 10 years, though any prison term would likely be measured in months rather than years.

U.S. Attorney Geoffrey S. Berman said the trial marks the end of the prosecutions, but he suggested that government won't hesitate to start a new case against anyone "who might be tempted to engage in the sort of misconduct these prosecutions have only begun to expose."

For the third time, beleaguered LSU men's basketball coach Will Wade found his name dragged into a federal investigation into college basketba…