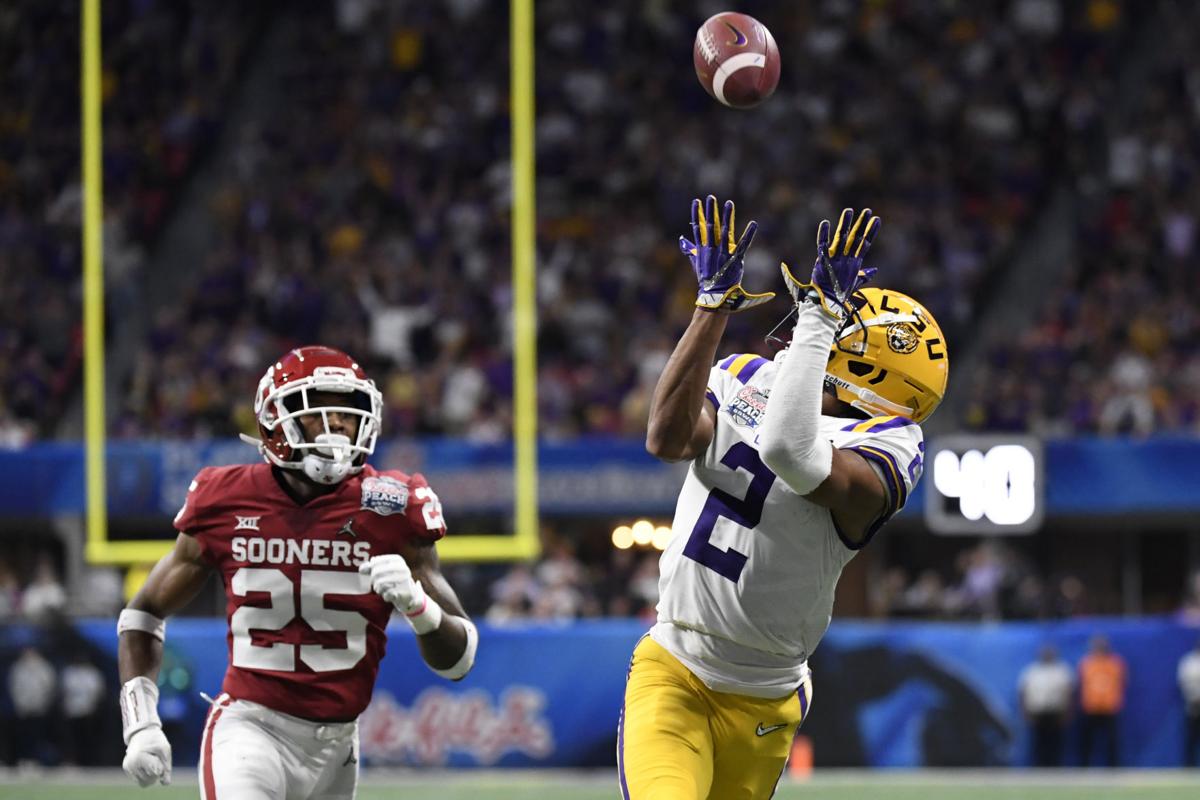 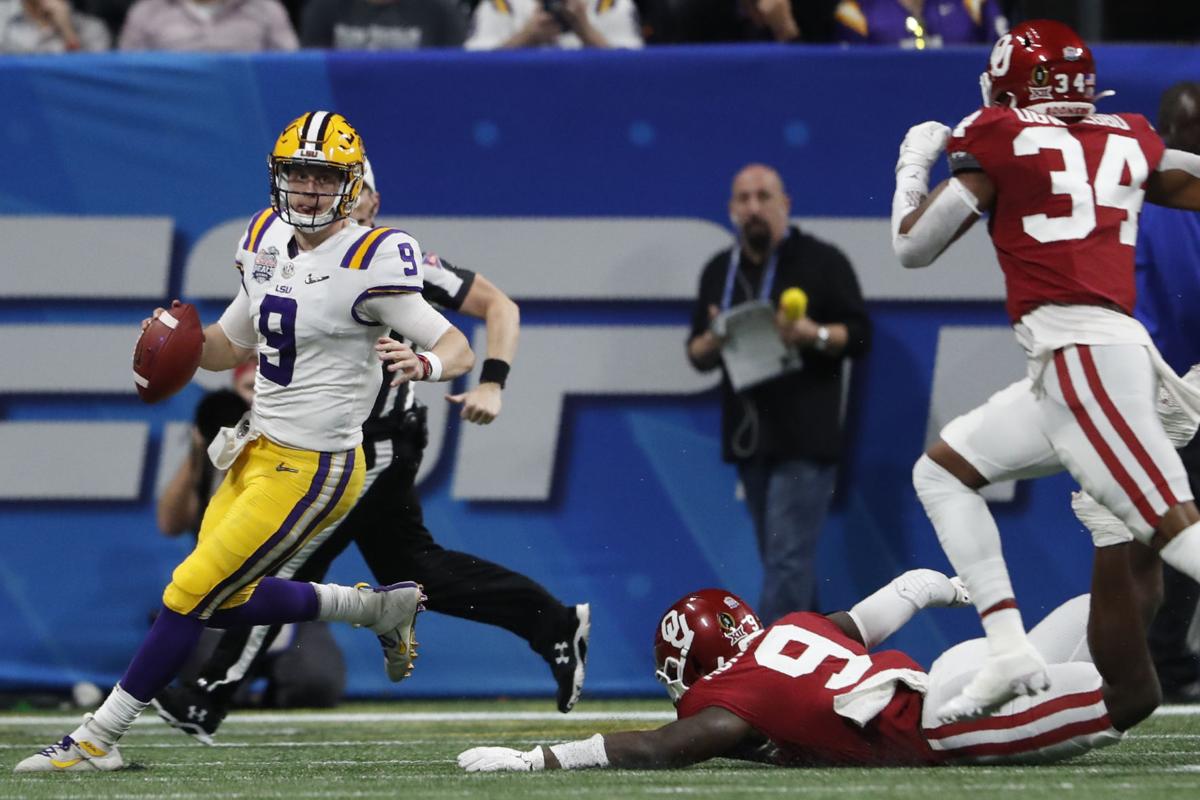 LSU quarterback Joe Burrow (9) runs out of the pocket against Oklahoma during the first half of the Peach Bowl NCAA semifinal college football playoff game, Saturday, Dec. 28, 2019, in Atlanta. (AP Photo/John Bazemore)

LSU quarterback Joe Burrow (9) runs out of the pocket against Oklahoma during the first half of the Peach Bowl NCAA semifinal college football playoff game, Saturday, Dec. 28, 2019, in Atlanta. (AP Photo/John Bazemore)

ATLANTA — The Joe Burrow-to-Justin Jefferson connection was so hot at the Chick-fil-A Peach Bowl that they burned through the record book. Then Burrow went back for more.

LSU's quarterback took barely 20 minutes to throw five touchdown passes against a stunned Oklahoma secondary, easily breaking a the bowl record for touchdown passes that had stood since 1992.

Justin Jefferson. Has 1️⃣2️⃣3️⃣4️⃣ TDs in his bag today.

East Carolina quarterback Jeff Blake held that record, throwing four scores in a win over NC State. Blake went on to play in the NFL and started 11 games for the New Orleans Saints in the 2000 season.

He also broke his own single-game record for touchdown passes that he set earlier this season with six scores in a win over Vanderbilt.

LSU vs Oklahoma: Our 5 most-popular stories to get you ready for the Peach Bowl

OK, LSU fans, you've waited a few weeks for this one.

But the Tigers' junior wide receiver may have been the brightest star burning for the Tigers, setting record after record as he ripped through the Sooners' secondary for four first-half touchdowns, setting a CFP record of his own.

Jefferson fought through an Oklahoma defender for a 19-yard touchdown on LSU's first drive of the game and logged a 35-yard score later in the quarter. But he was far from done, catching 42- and 30-yard shots from Burrow that brought him into a tie with teammate and Biletnikoff award winner Ja'Marr Chase with his 18th touchdown of the season.

Jefferson broke LSU's single-season record for catches in a season in the first half, and increased that total on the Tigers' opening drive of the second half. The record had stood since 2001 when former Tigers wide receiver Josh Reed caught 94 passes.

Rabalais: What's driving No. 1 LSU to CFP glory after a season of awards, trophies? Finishing the job

ATLANTA — Joe Burrow has a cold.

After the fourth score, Jefferson looked into the camera and held up four fingers.

The scores brought him into a tie for the most touchdowns catches in a single season in SEC history with Chase and former Florida wide receiver Anthony Reidel. He had nine catches for 198 yards, putting him on pace to challenge the LSU records for yardage (Josh Reed, 293) and touchdowns (Carlos Carson, 5) in a single game.

Burrow's other touchdowns were an 8-yarder to Terrace Marshall in the first quarter, a 63-yarder to tight end Thaddeus Moss in the second quarter before another short touchdown to Marshall just before halftime. Burrow increased his season total to 55, nearly doubling what the record of 28 that had stood until this season.

Marshall's two scores also made him the third LSU wide receiver this season to break what had stood as the program record (12) since the 2006 season.

Joe Burrow on why he can't go out to dinner anymore; Q&A with LSU QB at Peach Bowl

ATLANTA — A Heisman Trophy comes with a variety of perks, but Joe Burrow shared one of the obvious negatives at Peach Bowl Media Day: He can't…

Burrow and the Tigers were also on pace to challenge the following records: