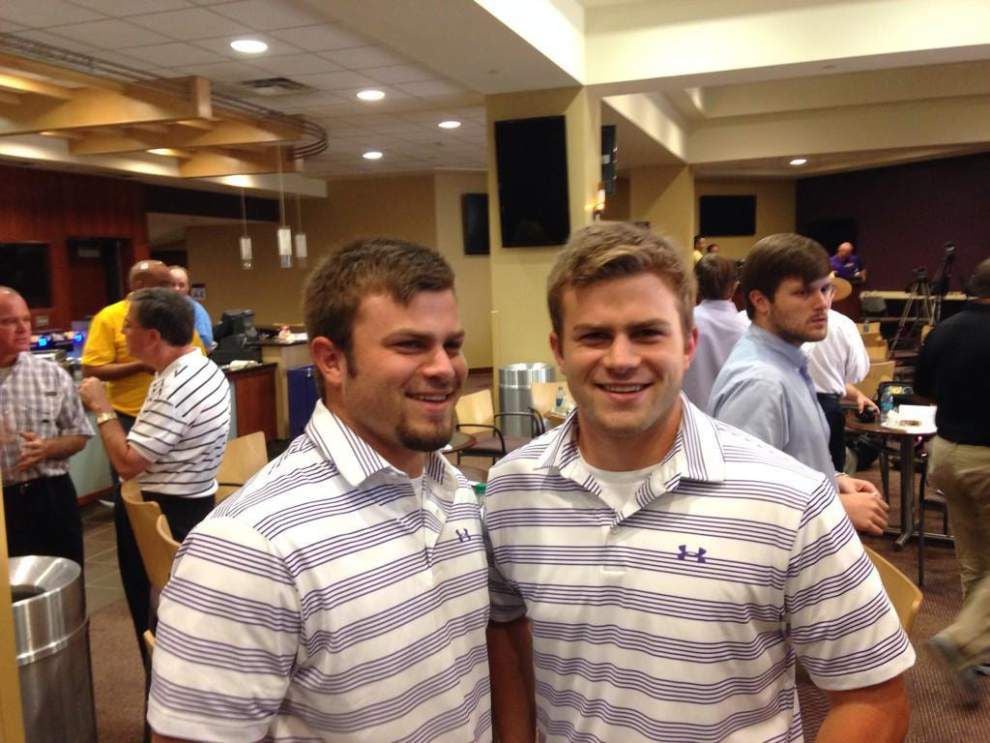 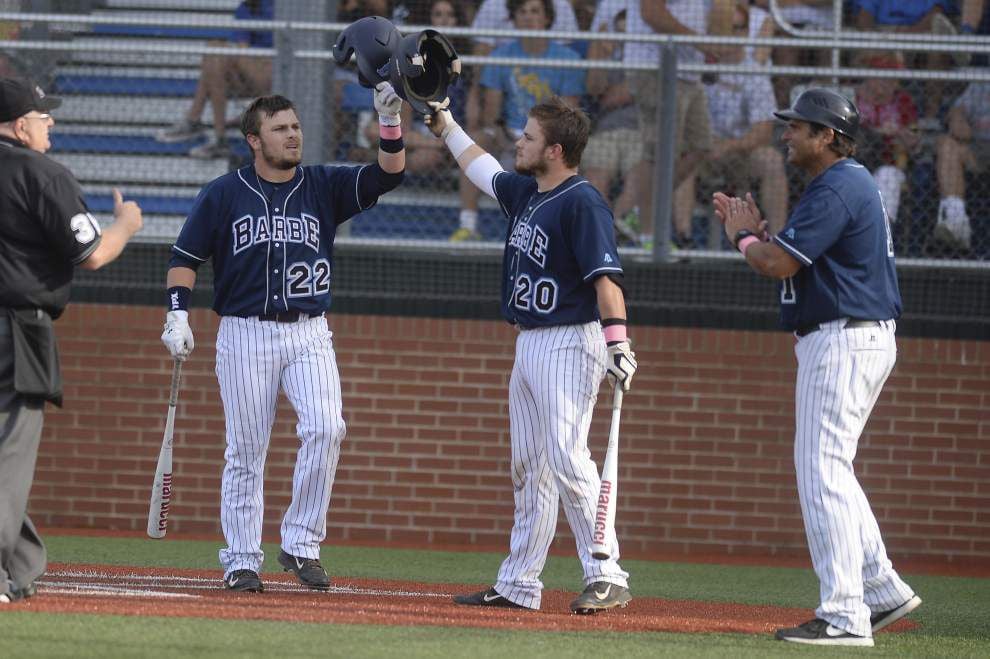 Advocate staff photo by HILARY SCHEINUK Barbe's Beau Jordan celebrates his home run with teammate and brother Bryce Jordan (20) and head coach Glenn Cecchini after hitting a home run against Live Oak on Saturday during the Class 5A state championship at McMurray Park in Sulphur.

Advocate staff photo by HILARY SCHEINUK Barbe's Beau Jordan celebrates his home run with teammate and brother Bryce Jordan (20) and head coach Glenn Cecchini after hitting a home run against Live Oak on Saturday during the Class 5A state championship at McMurray Park in Sulphur.

A young mother of infant twin boys, Lori Jordan had a tough time keeping track who was who.

She had a way of finding out: son Bryce Jordan, unlike his twin brother Beau, has a birthmark — on his butt.

“I’d have to take the diaper off to tell them apart,” Lori said with a laugh.

Among LSU’s 2014 signing class, identical twins Beau and Bryce Jordan are overshadowed by the crew of highly touted pitchers and celebrated infielders in a star-studded haul, but they’re more interesting than any one signee.

There are two of them. And they still look just alike.

How much so? Coach Paul Mainieri has lifted his strict no facial hair policy for Beau.

“This is the only way I can tell the difference between him and his twin brother Bryce,” Mainieri said. “I have not given him permission, but I have made him wear a goatee.”

Some positions seem wide open. They include catcher, third base and first base. Spots in the starting weekend pitching rotation and key bullpen jobs are open for competition.

The Jordan twins don’t hold the clout of their peers in a signing class many rank No. 1 in the nation.

For instance, hard-throwing lefty pitchers Mac Marshall and Jake Latz passed on a near $2 million bonus check, stiffing major league teams for LSU. Guys like catcher Mike Papierski and infielders Greg Deichmann and Grayson Byrd were all drafted but passed on bonus money to at LSU.

The twins weren’t drafted. Each is listed on LSU’s roster at 5-foot-10, 195 pounds. Don’t believe it for a second.

Bryce is bigger, ever so slightly, and Beau is faster, said Lori Jordan. Both are “stocky,” said their dad, Brad.

It’s one of many things the two have in common.

They have the same taste in clothes and food. Their voices are similar and their faces — aside from Beau’s goatee — are strikingly alike. During LSU baseball’s media day two weeks ago, both arrived in matching purple-striped shirts.

Glenn Cecchini, the duo’s high school coach at Barbe, is a second father to the Jordans. It doesn’t matter. He can’t distinguish them any better than Mainieri.

There are differences, of course. Bryce is more aggressive, and Beau is the more passive, laid-back one, Lori said. One dates a blonde and the other a brunette.

Both are the big brother to 13-year-old Brock. Brock has Down syndrome.

“He likes going to baseball games,” Brad said of Brock. “He really enjoys being at baseball games with them. If they’re on deck, he’ll yell at them, and he’ll get in the batting stance and show them how to hit.”

“He’s their coach,” Lori said with a laugh.

The Jordan twins were what they call “a package deal” during the recruiting process. Eighteen years together wasn’t enough?

“That’s what I’m saying,” a smiling Bryce quipped with a glance toward his brother.

They had offers to visit Ole Miss, Oklahoma State and Florida. When the LSU offer came, they committed days later.

They don’t just look like each other, Brad said. “They feed off each other.”

That started early. They began walking at 8-months old, a few months earlier than normal for a toddler. They nearly skipped the crawling stage, Lori said.

“One started walking, and two days later the other was right behind him,” she said.

Lori and Brad’s first place made walking easy for the twins. The Jordans lived in a tiny married dorm at McNeese State for four years while Brad completed college.

Those were the good old days — when mom had to flip Beau or Bryce over to tell them apart.

That’s all over now. Well, maybe. “If they get fresh haircuts,” Lori said, “I have a hard time.”