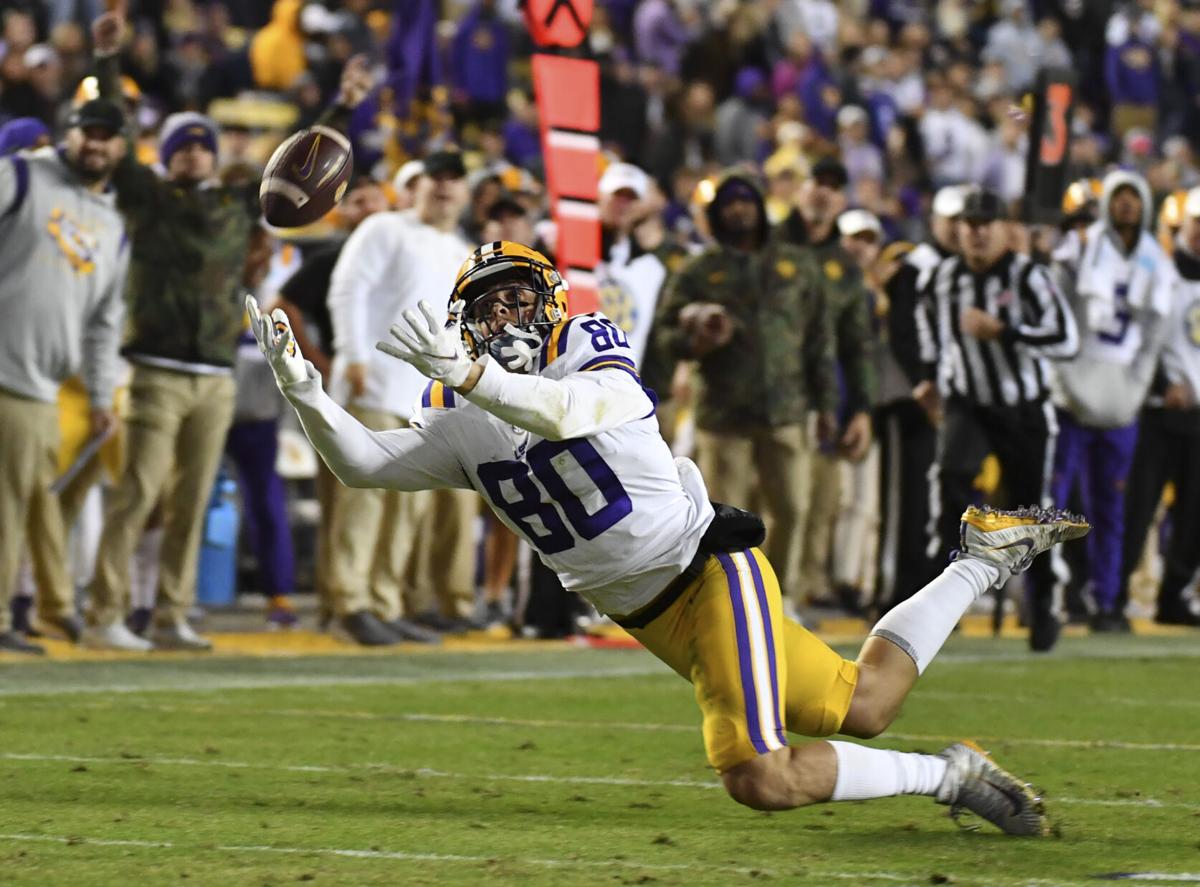 LSU wide receiver Jack Bech (80) falls short on the catch in the second half against Arkansas, Saturday, November 13, 2021, at Tiger Stadium on the campus of LSU in Baton Rouge, La. Arkansas defeated LSU 16-13 in overtime. 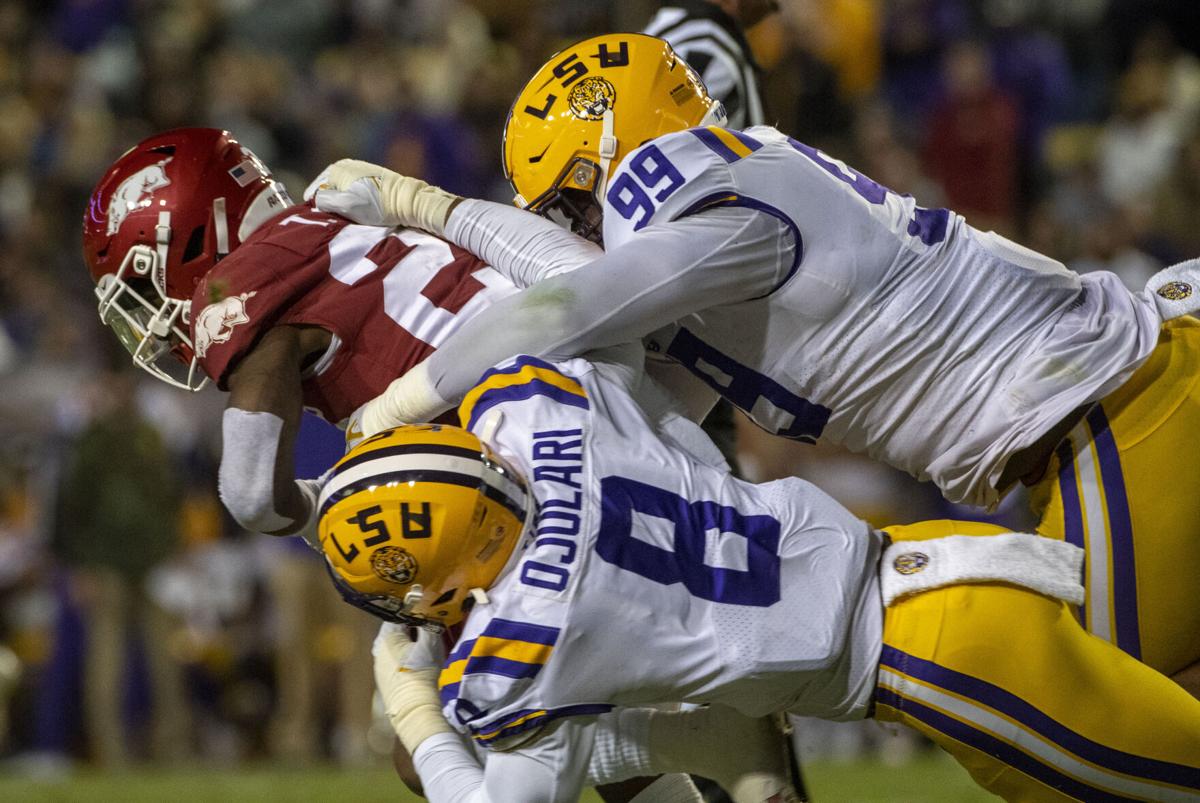 LSU defensive end BJ Ojulari (8) and LSU defensive tackle Jaquelin Roy (99) make the stop for a loss on Arkansas running back Trelon Smith (22) during the first half at Tiger Stadium on Saturday Nov. 13, 2021, in Baton Rouge, La.

LSU wide receiver Jack Bech (80) falls short on the catch in the second half against Arkansas, Saturday, November 13, 2021, at Tiger Stadium on the campus of LSU in Baton Rouge, La. Arkansas defeated LSU 16-13 in overtime.

LSU defensive end BJ Ojulari (8) and LSU defensive tackle Jaquelin Roy (99) make the stop for a loss on Arkansas running back Trelon Smith (22) during the first half at Tiger Stadium on Saturday Nov. 13, 2021, in Baton Rouge, La.

What a strange existence for LSU football these past few weeks.

The Tigers fight but have little or nothing to show for their efforts.

Their coaches coach and try to make changes but find them ineffective — or counterproductive — when it comes to the bottom line. And if they were effective, it wouldn’t matter anyway, because they were all effectively fired a month ago.

There is heartbreak, or at least heartburn, from coming so close to ruining Alabama’s season last week or reaching the precipice of bowl eligibility that a win over Arkansas would have delivered. But then again, how much does any of it matter when virtually everyone in the LSU universe is craning their neck to see over the horizon to who the next coach will be? At this point, even trying to salvage program pride and avoid LSU’s first losing record since 1999 — something that can be achieved only by winning out against ULM and Texas A&M — is not going to move the needle very much for a fan base that has moved on from this limbo land of a season to 2022.

Garrett Nussmeier stood on the far end of the sideline and watched the Arkansas players chase their kicker down the middle of Tiger Stadium. H…

But back to the present. Saturday night brought the cold sting of reality on a cold night in Tiger Stadium as Arkansas danced off with The Boot and a 16-13 overtime victory, the Razorbacks’ first win over LSU since 2015.

It was a dizzying moment of delight for Arkansas, now 7-3, a team that has been downtrodden for so long and is now enjoying a top 25-ish revival under likable, aw-shucks coach Sam Pittman, the pride of El Reno, Oklahoma. So no one ruin the Razorbacks’ reverie by telling them that LSU was able to squeeze only 69 players out of its tattered roster for pregame warmups. That Arkansas needed overtime to beat what was basically a spring game-caliber LSU football team.

You know the drill by now. LSU was without nine players who have started games on defense. They were without offensive stars such as Kayshon Boutte. And after the 20-14 loss to Alabama, the Tigers added two more to the M*A*S*H unit with starting guards Ed Ingram and Chasen Hines out, the latter for whatever is left of the season.

Operating behind this latest shell game of an offensive line were Max Johnson and Garrett Nussmeier. Like in a spring game, the quarterbacking job was up for grabs. It appeared to be grabbed by Nussmeier, who played the vast majority of the game after Johnson went to the bench after two unproductive possessions.

LSU was severely short-handed on both sides of the line of scrimmage for Saturday night’s game with No. 25 Arkansas in Tiger Stadium.

He stopped short of saying who he would try as the starting quarterback next week, a decision that may only matter in the context of 2022.

Nussmeier gave the Tigers offense some swagger that it’s been lacking from Johnson, who no doubt has had his confidence shaken by all the hits he’s taken this season. And he threw for the Tigers’ only touchdown, finding a toe-tapping Jack Bech in the back of the end zone on a 29-yard strike that gave LSU a 10-3 halftime lead.

The Tigers could have at least been up 13-3 if not for an untimely gamble by offensive coordinator Jake Peetz that was OK’d, or at least not vetoed, by Orgeron. LSU put in Tyrion Davis-Price in the wildcat formation to take the snap, but the slightly wonky exchange with center Liam Shanahan went off his hands and to the Razorbacks.

LSU was steaming for at least a field goal, but Peetz decided to get much too cute at exactly the wrong moment. Orgeron was none too pleased, and left more tire tracks on Peetz to go with the ones from previous criticisms. And yet, I get it. These coaches are steaming out of Baton Rouge whenever this season ends and have decided to pull out all the stops, brakes, safety checks and, at times, common sense. But they are trying, and sometimes fortune favors the foolish. Gambling sure worked on that fake punt at Alabama to set up the Tigers’ first touchdown.

Ultimately, trickery, treachery and quarterback shuffling didn’t result in more point production for LSU. The Tigers managed just 13 points going into their first overtime contest since that historic 74-72 seven-overtime loss in 2018 at Texas A&M. LSU has scored 21 points or less in four of its past five games.

LSU got the ball first in OT, then Nussmeier showed all the promise and peril of playing a freshman quarterback. On third-and-20 after being sacked at the 35, he threw an absolute seed to Malik Nabers for 24 yards to the 11. But two plays later he was picked off in the end zone by Montaric Brown while aiming for Devonta Lee, a pass much too dangerous considering you must ensure you come away with at least a field goal.

Arkansas didn’t follow LSU down its mistake-filled road. The Razorbacks carefully nudged the ball to the 20, directly between the uprights, setting up Cam Little’s 37-yard Boot-grabber.

Strong, weak. Up, down. Win, lose. It’s getting hard to figure what matters at this point.

Ed Orgeron approached the podium Saturday night teary eyed. For the second straight week, LSU had nearly pulled off an upset, and for the seco…