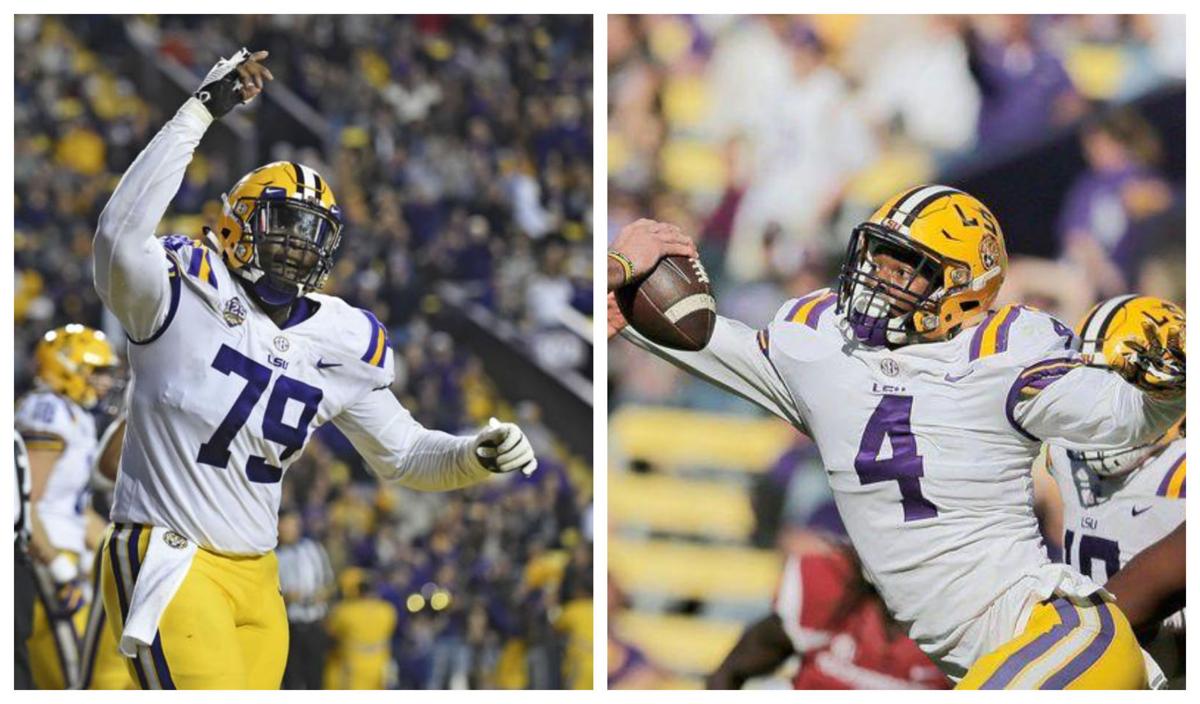 Junior center Lloyd Cushenberry (left) and sophomore linebacker K'Lavon Chaisson will carry on LSU football's No. 18 tradition for the 2019 season. The tradition started back in 2003 when senior quarterback Matt Mauck wore No. 18 while helping LSU claim its first national championship in 45 years. 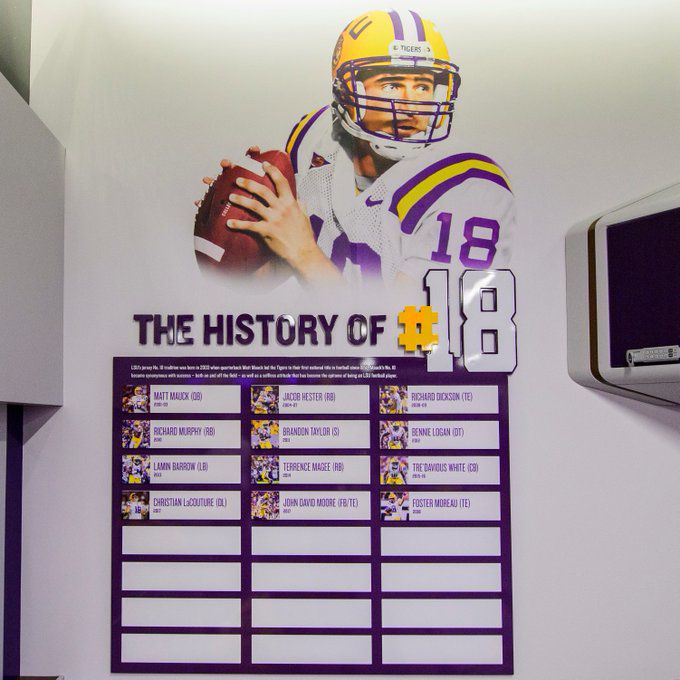 The history of #18 jerseys for LSU football. 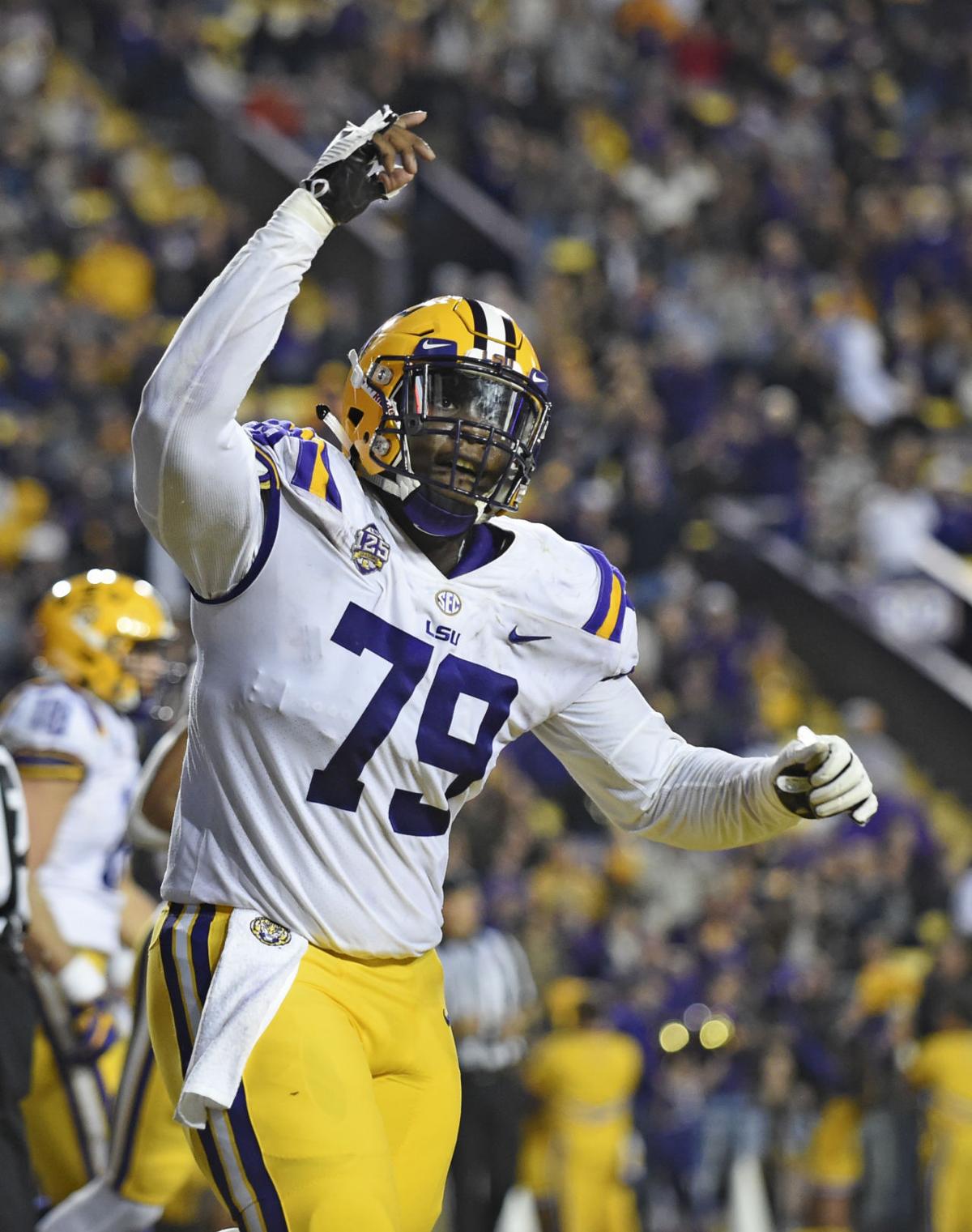 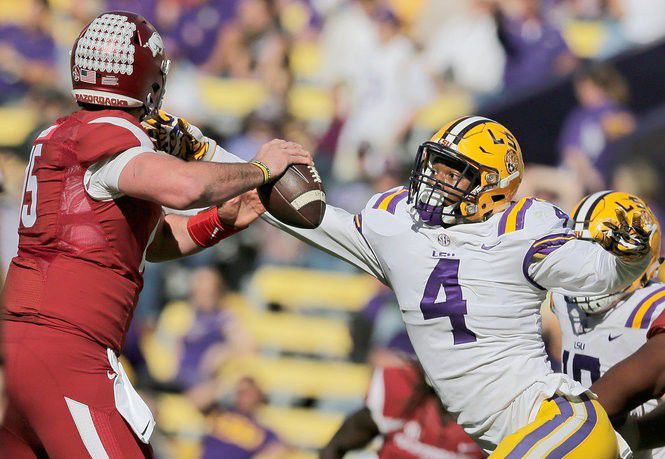 Arkansas Razorbacks quarterback Cole Kelley (15) just gets the pass off as LSU Tigers linebacker K'Lavon Chaisson (4) reaches for him during second half action in Baton Rouge on Saturday, November 11, 2017. The Tigers defeated the Razorbacks 33-10.

Junior center Lloyd Cushenberry (left) and sophomore linebacker K'Lavon Chaisson will carry on LSU football's No. 18 tradition for the 2019 season. The tradition started back in 2003 when senior quarterback Matt Mauck wore No. 18 while helping LSU claim its first national championship in 45 years.

The history of #18 jerseys for LSU football.

Arkansas Razorbacks quarterback Cole Kelley (15) just gets the pass off as LSU Tigers linebacker K'Lavon Chaisson (4) reaches for him during second half action in Baton Rouge on Saturday, November 11, 2017. The Tigers defeated the Razorbacks 33-10.

When members of the LSU football team run onto the field for their first practice of preseason camp Friday, the Tigers will have a new No. 18 leading them out.

Junior center Lloyd Cushenberry and sophomore linebacker K'Lavon Chaisson will carry on the tradition that started back in 2003 when senior quarterback Matt Mauck wore No. 18 while helping LSU claim its first national championship in 45 years.

It's the second time in the past three seasons that a pair of No. 18s will be on the field. Defensive tackle Christian LaCouture and fullback/tight end John David Moore shared the honor in 2017.

But there is a slight twist this year: Cushenberry can't wear No. 18 because he's an offensive lineman, so he'll have a patch with the numeral 18 on the left shoulder of his No. 79 jersey.

Players checked in for preseason camp earlier Thursday and will practice for the first time at 4 p.m. Friday.

According to the school's media guide, the No. 18 jersey has become synonymous with success — both on and off the field — as well as a "selfless attitude that has become the epitome of being an LSU football player."

They're the qualities Mauck displayed in 2003 while quarterbacking LSU to the national championship that eluded it for nearly a half-century.

When his college career ended, Mauck handed the number down to freshman fullback Jacob Hester, who eventually helped LSU win another national title in 2007.

Through 2018, the tradition — or as Hester has called it, the "One Eight Club" — had welcomed 10 additional members (five on offense, five on defense).

Tight end Foster Moreau wore No. 18 last season, and he was selected in the fourth round of the 2019 NFL draft by the Oakland Raiders.

Rabalais: As LSU opens football camp, these are some of the Tigers' biggest mysteries

Optimism abounds for LSU football as the Tigers check in for preseason camp Thursday and open fall practice Friday.

Moreau inherited the number from LaCouture and Moore, who wore it in 2017.

Hester, who wore the number for four seasons, is one of just three players to have had it for more than one year.

Also donning it for multiple seasons were tight end Richard Dickson in 2008-09 and All-American cornerback Tre'Davious White in 2015-16.

Hester, White and Moreau are three of the six players who have gone on to be selected in the NFL draft after wearing the number.

The others are defensive back Brandon Taylor, defensive tackle Bennie Logan and linebacker Lamin Barrow.

LSU to sell alcohol throughout most public areas of Tiger Stadium this season; see plan

Beer and wine will be sold in the public areas of Tiger Stadium during the upcoming LSU football season, the university announced Thursday.

A graduate of Dutchtown High School, Cushenberry started every game at center last season. He finished his sophomore year second on the team in total offensive snaps with 973.

Cushenberry rarely left the field last season — his first as a starter. He missed just eight snaps during conference games and he played every offensive snap during LSU's epic seven-overtime loss to Texas A&M.

Cushenberry, a redshirt junior, was the team's most consistent offensive lineman last year and was considered a coach on the field. He has played in 24 games during his career, and he will start at center again this fall.

Last month, Cushenberry was a preseason first-team All-Southeastern Conference pick. He also landed on the watch list for the Rimington Trophy, which is annually awarded to the nation's top center.

Chaisson was one of LSU's fastest-rising stars as a freshman in 2017 before he injured his knee in the 2018 opener against Miami and missed the remainder of the season.

With DL coach in wheelchair after injury, LSU's Ed Orgeron will coach unit 'as much as I can'

LSU defensive line coach Dennis Johnson hurt both his knees and will not coach on the field this season, head coach Ed Orgeron announced Thursday.

When he was on the field for the first snap of the first game of the 2017 season against BYU, Chaisson became just the eighth true freshman since 2000 to start an opener for LSU.

He went on to start three games and finished the season with 27 tackles, two sacks and 4½ tackles for loss.

The One Eight Club

The history of the No. 18 jersey since quarterback Matt Mauck wore it in leading LSU to the national title in 2003:

Photos, videos: The Tigers are back! LSU football players arrive on campus for camp

The LSU football team arrived back on campus for camp on Thursday morning.