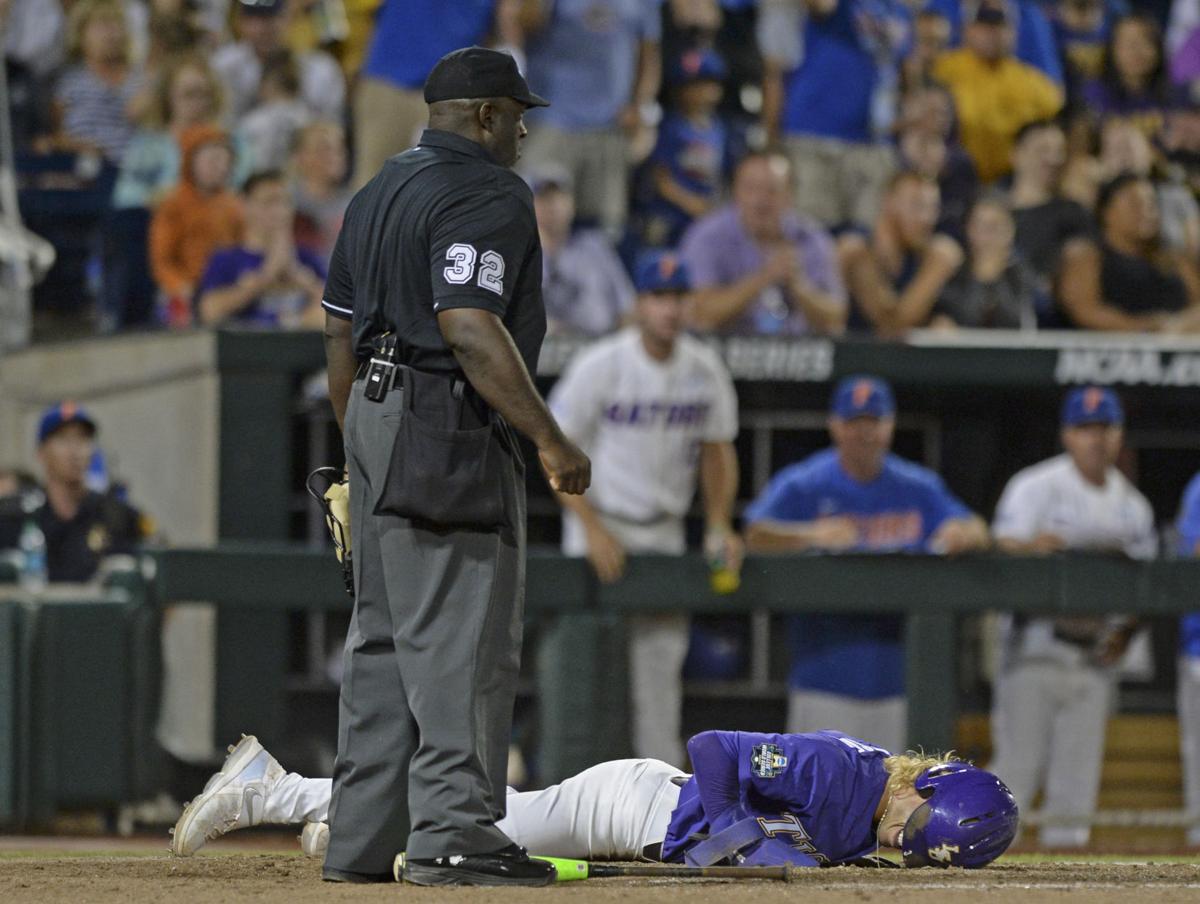 LSU shortstop Kramer Robertson (3) reacts to being called out at home by umpire Troy Fullwood in the eighth inning during Game 2 of the College World Series finals between LSU and Florida, Tuesday, June 27, 2017, at TD Ameritrade Park in Omaha, Ne. Florida won 6-1. 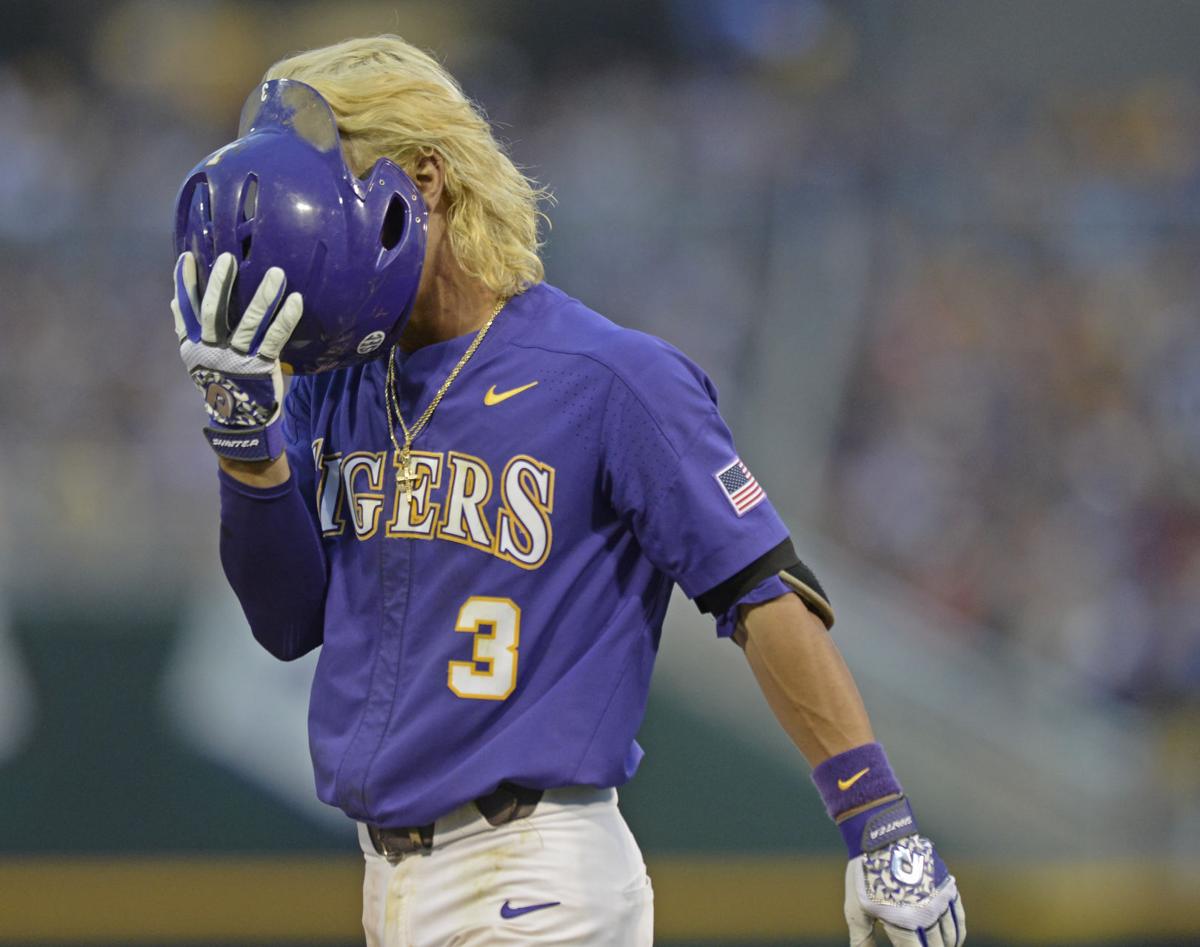 LSU shortstop Kramer Robertson (3) reacts to grounding out to first base to tend the top of the fifth inning during Game 2 of the College World Series finals between LSU and Florida, Tuesday, June 27, 2017, at TD Ameritrade Park in Omaha, Ne. 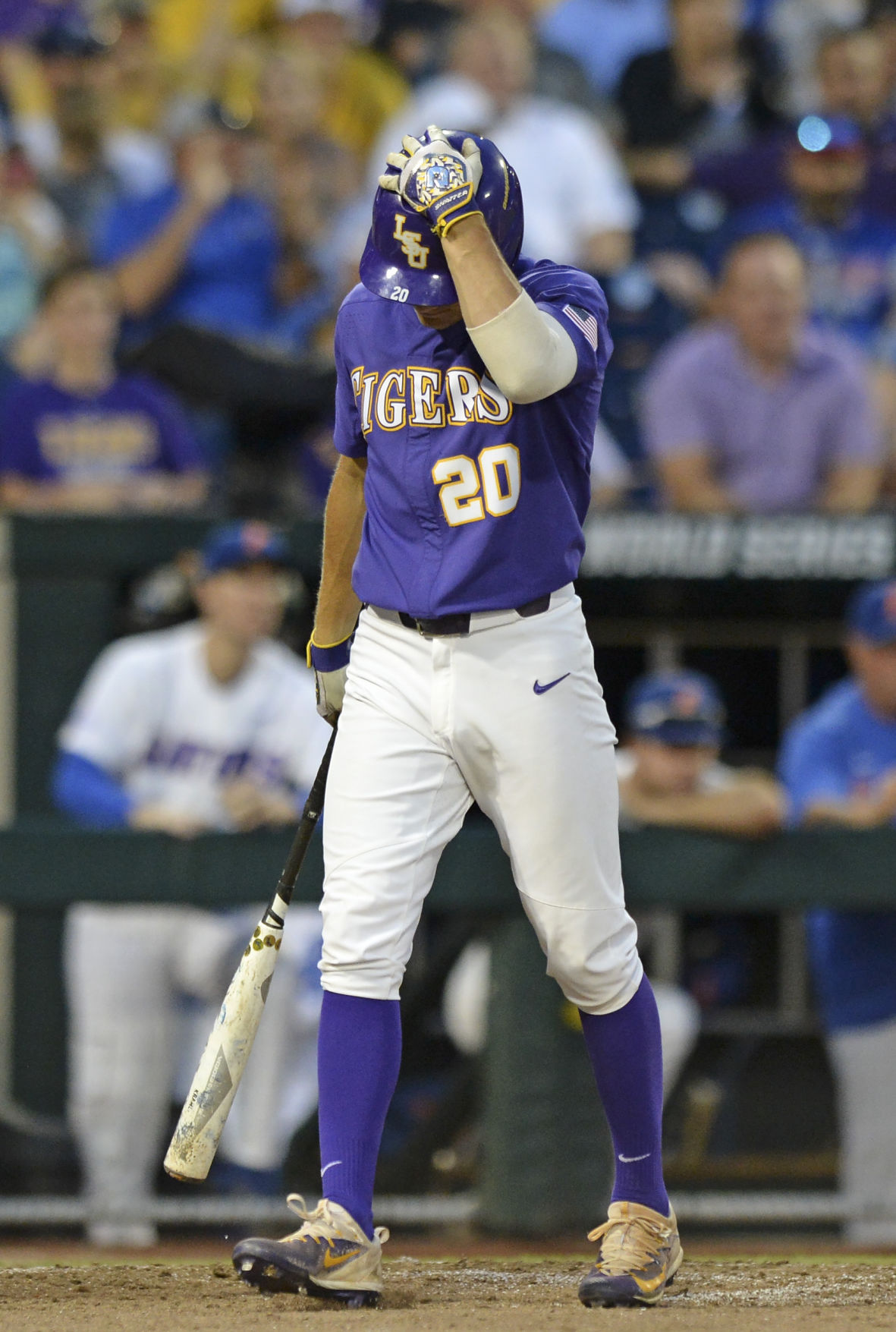 LSU left fielder Antoine Duplantis (20) reacts to striking out in the sixth inning during Game 2 of the College World Series finals between LSU and Florida, Tuesday, June 27, 2017, at TD Ameritrade Park in Omaha, Ne.

LSU shortstop Kramer Robertson (3) reacts to being called out at home by umpire Troy Fullwood in the eighth inning during Game 2 of the College World Series finals between LSU and Florida, Tuesday, June 27, 2017, at TD Ameritrade Park in Omaha, Ne. Florida won 6-1.

LSU shortstop Kramer Robertson (3) reacts to grounding out to first base to tend the top of the fifth inning during Game 2 of the College World Series finals between LSU and Florida, Tuesday, June 27, 2017, at TD Ameritrade Park in Omaha, Ne.

LSU left fielder Antoine Duplantis (20) reacts to striking out in the sixth inning during Game 2 of the College World Series finals between LSU and Florida, Tuesday, June 27, 2017, at TD Ameritrade Park in Omaha, Ne.

OMAHA, Neb. — For those tens of thousands of LSU baseball fans who turned the seats at TD Ameritrade Park into the Midwest’s largest Cajun convention, this was a new feeling.

It wasn't a good felling.

Until now, defeat in the final round of the College World Series had been a foreign concept.

OMAHA, Neb. — You always knew if LSU ever lost in a championship situation in the College World Series, it would seem like agony for a program…

The delirious joy they had grown so accustomed to in Omaha was lost somewhere on this cool, clear night. Those loud and proud Louisiana natives who flocked to this corner of Nebraska sat in stunned silence as, for the first time in its proud history, LSU played for a championship in Omaha and did not return home with another number to add onto the Intimidator.

They watched as Florida defeated LSU 6-1. They watched, also, as LSU beat itself. At 10:26 p.m. Tuesday, the Gators clinched their first national championship, while the Tigers and their fans could do nothing but watch and come to grips.

“This is the cruelty of what we do,” LSU coach Paul Mainieri said. “Going in, we’re happy to get to Omaha and think we can win it, but only one team gets to go home happy. It’s an awful feeling to come up a little short. But that doesn’t mean we’re not proud.”

Needing a win to force a decisive Game 3 in the finals, LSU confidently handed the ball to its all-time winningest pitcher, Jared Poché, on Tuesday night.

But Poché is not the type of pitcher who can take over a game. He needs help behind him, and that was sorely lacking.

Nick Coomes, starting for the first time since LSU was walloped 13-1 by Oregon State in its second game of the CWS, misplayed a ground ball hit by Florida leadoff hitter Deacon Liput. Two batters and two singles later, that error resulted in a 1-0 Gators lead.

After a two-out single in the second inning, Poché caught Nick Horvath leaving first base early on a stolen base attempt. Poché fired to first, and Coomes had a play at second, but he lost the ball on the transfer to his throwing hand. The next batter, Liput, singled Horvath home to put the Gators ahead 2-0.

“As a pitcher there’s nothing you can control after you let go of the ball,” Poché said. “These guys have been making plays for me my entire career. Unfortunately we kicked it around a little bit, but I’d go to war with these guys again.”

The way LSU had been swinging the bat in the CWS, a two-run deficit would normally be nothing to fear. But Tuesday was not a normal day. Two runs felt huge.

Earlier in the week, Mainieri said the wind that had been blowing out all week had made the cavernous TD Ameritrade Park play much more like old Rosenblatt Stadium.

Tuesday, that wind made TD Ameritrade Park play much more like it did in 2013 and 2014 — in other words, not homer-friendly.

The Tigers had used those prevailing winds to their advantage in their first six games of the CWS, clobbering eight home runs — the most hit by a team in the CWS since the event moved to TD Ameritrade Park in 2011. Wednesday, their best shots died before they could reach the warning track.

“Florida’s 10 hits were all ground balls through the infield and low line drives,” LSU right fielder Greg Deichmann said. “The hits we had were the same as them, but they executed more of them. ... They out-executed us tonight.

Florida starter Tyler Dyson flummoxed the LSU lineup for a career-high six innings, rarely allowing LSU to barrel up one of his offerings. When the Tigers did square it up, Florida was often in the perfect place to haul it in.

Of the three hits LSU managed off Dyson, two didn't leave the infield, and the other was a seeing-eye single.

Even when it looked like LSU finally figured it out, the Tigers couldn’t get out of their own way.

The Gators brought in NCAA saves leader Nick Byrne in after Zach Watson’s infield single to lead off the LSU seventh. LSU then scorched back-to-back Byrne pitches for hits, scoring a run and putting runners at first and third with nobody out for Michael Papierski.

“We had runners at first and third after the Slaughter RBI,” Mainieri said. “I often safety squeeze in those situations we felt Pap was swinging the bat well. He puts the ball in play it’s a tie game for us. Then the call.”

Papierski hit a tailor-made double-play ball that still should’ve scored a runner. But Jake Slaughter slid with his cleats high into shortstop Dalton Guthrie. The umpires ruled Slaughter interfered with the play — a dead-ball penalty that meant the runner could not advance from third to home.

“I tried to go hard into second and do what I thought i was supposed to do,” Slaughter said. “He said I went out of my way to get him or something. That was his judgment, it’s how it happened.”

The Tigers' rally fizzled, the tying run stranded at third.

LSU’s chances looked even better the next inning, when Kramer Robertson led off with a bloop single, took second on a wild pitch and took third on Cole Freeman’s bunt single, putting runners at the corners for LSU’s two RBI leaders.

But Antoine Duplantis struck out, and Florida first baseman JJ Schwarz cleanly picked Greg Deichmann’s hard shot before firing a perfect throw home to nab Robertson at the plate for the second out.

“That’s the name of the game: Capitalize on things on things they give you, and they didn’t give us much,” Papierski said.

The Gators who had struggled to score runs all season brought four home against LSU’s electric closer, Zack Hess, in the eighth inning. The top of the ninth essentially amounted to a victory lap, as right-hander Jackson Kowar hung a final zero on the scoreboard.

“It’s tough to deal with the finality of it all,” Robertson said. “I gave it my all and I’m at peace with my career. We gave everything we had, we just didn’t win the national championship. But we made relationships that will last forever.”

It was a bit of an odd scene, because it flew in the face of history — and because it was largely done without the roar of a crowd serving as the background noise.

Many of those LSU fans remained to the bitter end. Many were wearing a popular shirt that was being sold outside the park that read “Alex Box North,” and it rang true on this weekend.

It was a complete takeover — a sea of purple and gold with specks of orange and blue mixed in. The expectation was a raucous celebration either Tuesday or Wednesday, but a celebration nonetheless, because this was LSU in Omaha competing for a championship.

These people had never been caught in the throes of this particular feeling.

On the final day of the 2017 season, Florida dogpiled on top of Kowar as fireworks went off behind the outfield wall and orange and blue streamers fluttered in the wind.

LSU and its fans finally came to understand what it felt like to lose in the championship round.

It was a new feeling, and a painful one.

OMAHA, Neb. — After 25 years as a family doctor in Lutcher, Dr. Jerry Poché was looking to g…

OMAHA, Neb. — This is the place Kramer Robertson wanted to be on June 27. This was the reason he came back: to end his college baseball career…